The pound retreated in many of its pairs on Thursday afternoon GMT in the aftermath of relative dovishness from the Bank of England in its monetary policy statement and press conference. Bounces by sterling against the dollar and yen seem to have been cut short. This coverage of the BoE’s Monetary Policy Summary (‘MPS’) looks at the key takeaways from the report and the charts of cable and GBPAUD.

The BoE left the bank rate on hold at the record low of 0.1% today as universally expected in a unanimous decision. All nine members of the MPC also voted to keep the bank’s purchases of corporate bonds on hold at £20 billion. However, there was a lone dissenter, Andy Haldane AKA ‘Mr Boom’, against the consensus to keep the stock of government bonds at £875 billion.

June’s MPS notes that while British inflation has reached a two-year high of 2.1%, slightly above the target of 2%, this is still expected to decrease in the medium term, so no immediate action is warranted to attempt to cap inflation. Significantly, the MPS explained that CPI is expected to go above even 3% for a limited period as the British economy continues to recover strongly compared to projections at the end of last year.

The forecast for growth in Q2 in the UK has also been raised by about 1.5% compared to May’s MPS, with GDP in June now projected by the BoE as being about 2.5% lower than the average in the fourth quarter of 2019. The conclusion of the MPS is somewhat cautious: ‘Policy should both lean strongly against downside risks to the outlook and ensure that the recovery was not undermined by a premature tightening in monetary conditions.’ Compared to the Fed, the BoE definitely seems to be more reluctant to start tapering this year.

Stress on avoiding any reduction of QE ‘at least until there was clear evidence that significant progress was being made in eliminating spare capacity and achieving the 2% inflation target sustainably’ (emphasis added) has led some analysts and traders to speculate that the first rate hike is unlikely to occur before 2023. As in previous months, though, June’s MPS contains no strong clues as to the timing of hiking rates or tapering QE.

The BoE’s next MPS is due on 5 August. To read the full text of June’s MPS, please visit this link:

The initial negative reaction to this afternoon’s news was clear but not nearly as strong as markets’ response to the Fed’s last meeting. The pound is generally down about 0.4% against majors since today’s open. 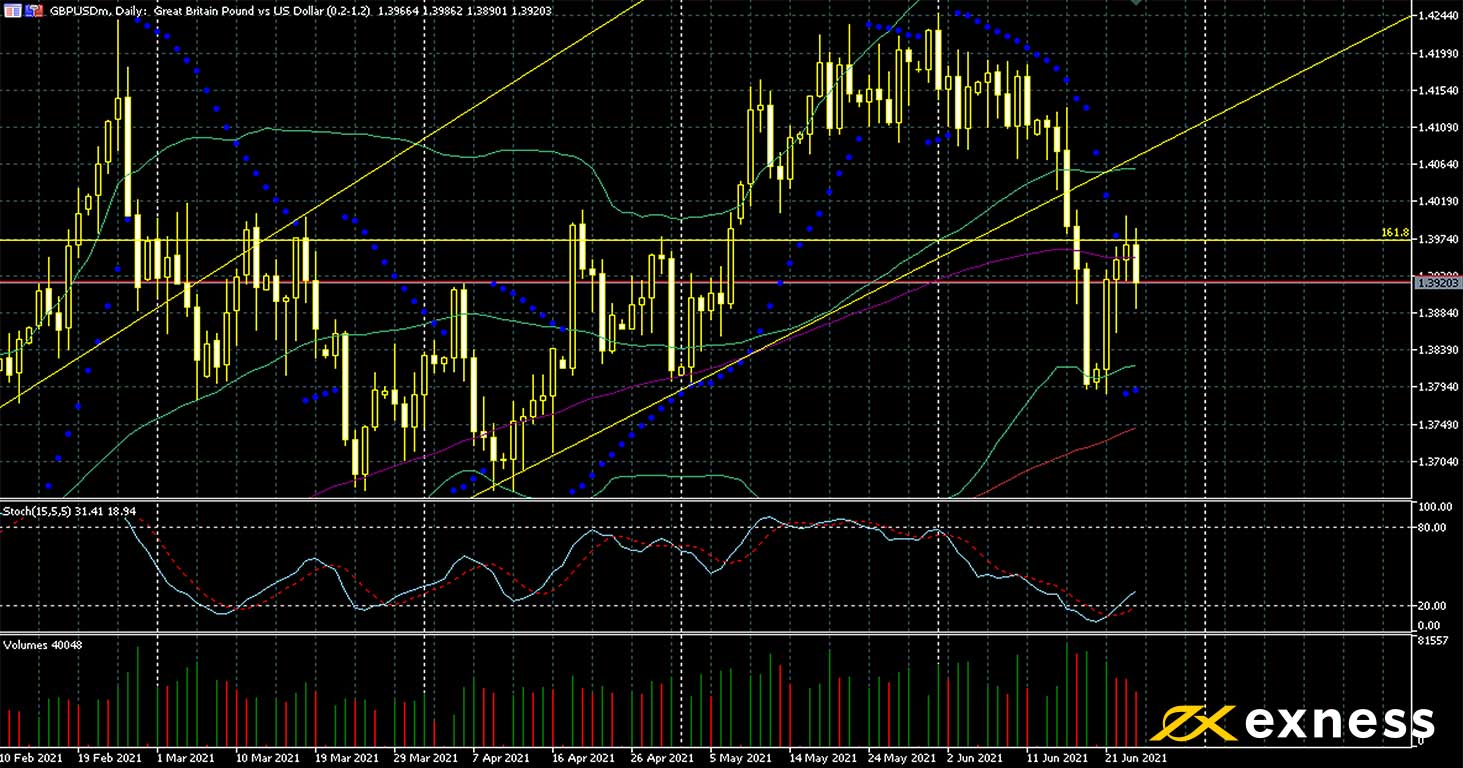 Cable has retreated below the 100 SMA again and is currently testing $1.39. $1.38 remains the key area of focus in the short term. Looking further ahead, if losses continue, the 200 SMA might be another important support near $1.374, slightly above the latest lows on this chart. The 161.8% weekly Fibonacci extension area based on events in March 2020 is an important technical reference: a move back above this zone might signal more strength and possibly a retest of recent highs around $1.42. 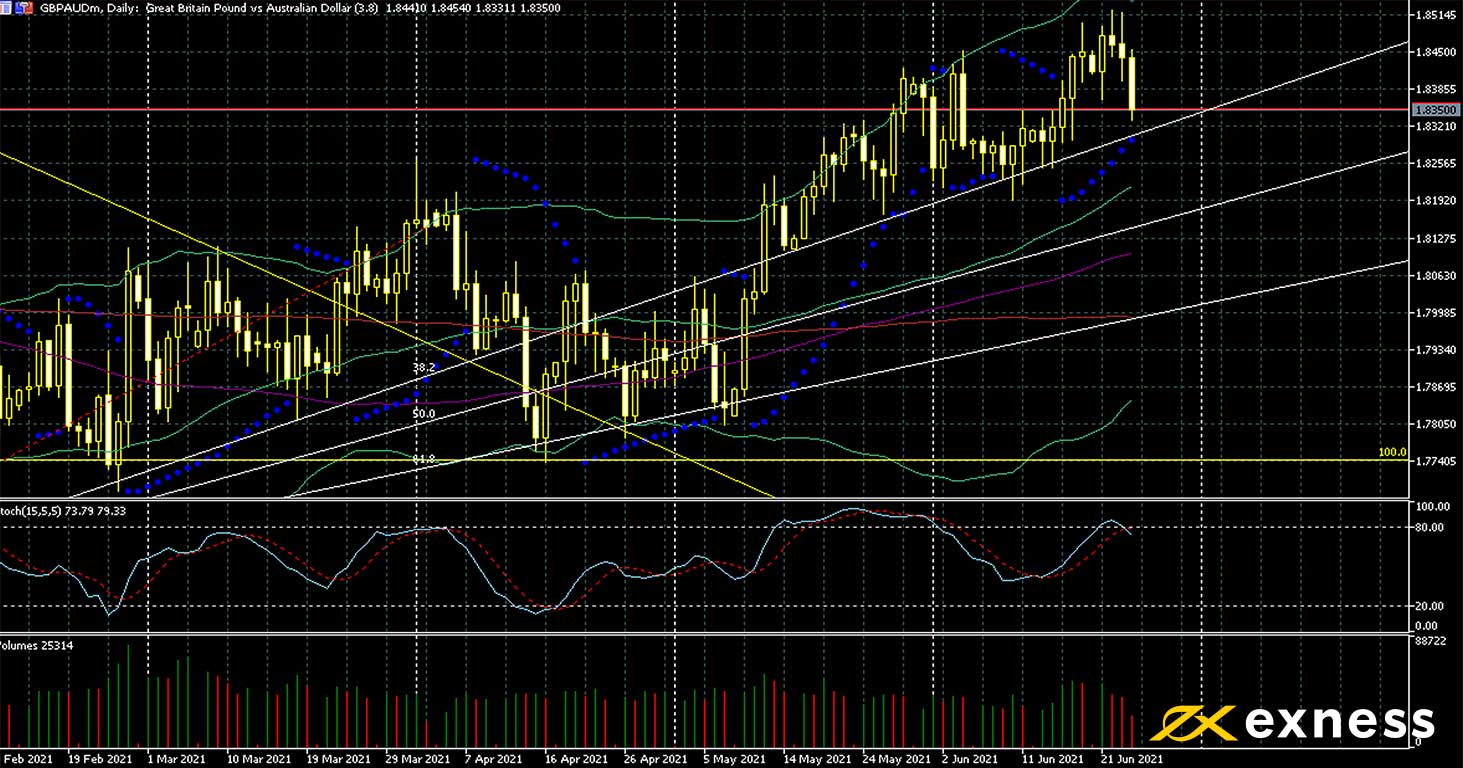 The immediate move downward against the Aussie dollar was slightly more pronounced than for cable given that GBPAUD had just reached an annual high and the stochastic signalled overbought. The technical picture overall here is much more positive, though, with moving averages giving a strong buy signal and the weekly Fibonacci fan having been clearly broken. Early April’s high around A$1.82 might now flip to support and drive a bounce if tested over the next few days. However, activity next week might be somewhat limited for GBPAUD as the RBA’s meeting on 6 July approaches.

Thank you for reading Exness Education’s synopsis of June’s British Monetary Policy Summary! Please join us again next week for more handy aggregations of key reports and how they have affected the most popular instruments. To request a report for summary here, simply leave a comment below any of Exness’ analytical posts on Facebook.

Disclaimer: the publication of analysis is a marketing communication and does not constitute investment advice or research. Its content represents the general views of our experts and does not consider individual readers’ personal circumstances, investment experience or current financial situation. Analysis is not prepared in accordance with legal requirements promoting independent investment research and Exness is not subject to any prohibition on dealing before the release of analysis. Readers should consider the possibility that they might incur losses. Exness is not liable for any losses incurred due to the use of analysis. Past performance does not guarantee or predict future performance.