In the aftermath of Tuesday’s unexpectedly strong claimant count change from the UK, the pound has made gains in some of its pairs, reaching a two-month high against the euro, but losing ground against the US dollar after last night’s hawkishness from the Fed. This summary of the UK’s labour market overview (‘LMO’) highlights the key statistics and evaluates the impact on the charts of cable (GBPUSD) and euro-pound (EURGBP).

The Office of National Statistics (‘ONS’) reported on Tuesday that the number of payrolls increased in May for the sixth consecutive month, with May’s gain being 197,000. Total British payrolls are now around 550,000 lower than in February 2020. May’s monthly claimant count change itself showed a drop of 92,600 people claiming Universal Credit. This figure came against the consensus of negative 62,000. Furthermore, April’s figure was revised downward from 15,100 to 55,800.

June’s LMO noted that the hardest hit groups in terms of employment during the current economic downturn are Londoners, young people under 25 and people working in hospitality. Recovery by raw numbers has been strong for these groups, but payrolls remain significantly below figures from the start of last year.

By contrast, vacancies from March to May 2021 are only 27,000 below the equivalent figure for January to March 2020. There are now more available jobs in most industries than in the first quarter of last year: reading between the lines, it’s reasonable to speculate that Brexit and the greater barriers for EU citizens have played a significant role here. Meanwhile February to April 2021 saw average pay grow 5.6%.

The ONS’ next LMO is due at 6.00 GMT on 15 July. To read the full text of June’s LMO, please visit the following link:

Tuesday’s unusually strong figures have given the pound a clear boost in many of its pairs. Yesterday’s annual inflation from the UK was also a highly positive factor, with 2.1% for non-core beating the consensus by 0.3% and coming in above the Bank of England’s traditional target of 2%.

Conversely, last night’s meeting of the Federal Open Market Committee (‘FOMC’) gave the dollar a strong boost. Members of the FOMC predicted higher inflation to come in the second half of 2020 while some traders now expect two rate hikes in 2023 plus possibly one next year. 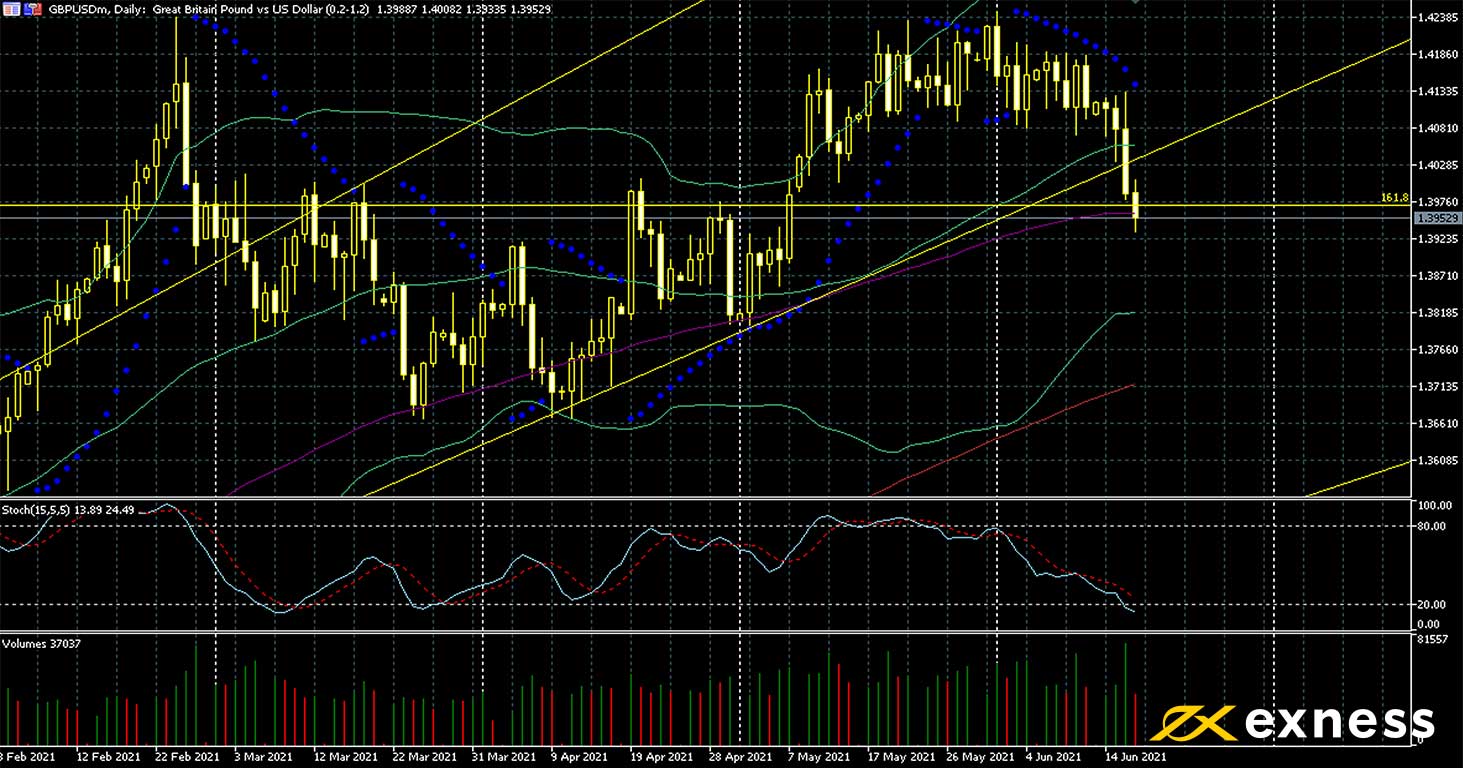 As elsewhere, the dollar made very strong gains in the aftermath, with the pound testing the 100 SMA today and moving into oversold. Despite the short-term reaction, buying volume spiked yesterday, which might suggest a correction to come instead of a reversal of the main uptrend on the weekly chart.

The main psychological area of $1.40 has recently been breached, so there’s no clear possibility for support before the 200-day simple moving average around $1.37. On the weekly chart meanwhile the 161.8% weekly Fibonacci extension area remains the primary technical reference for the time being.

The euro on the other hand has been one of the currencies against which the pound has made gains on the whole since Tuesday. Intraday bottoms this afternoon GMT around 85.4p are the lowest since 6 April. 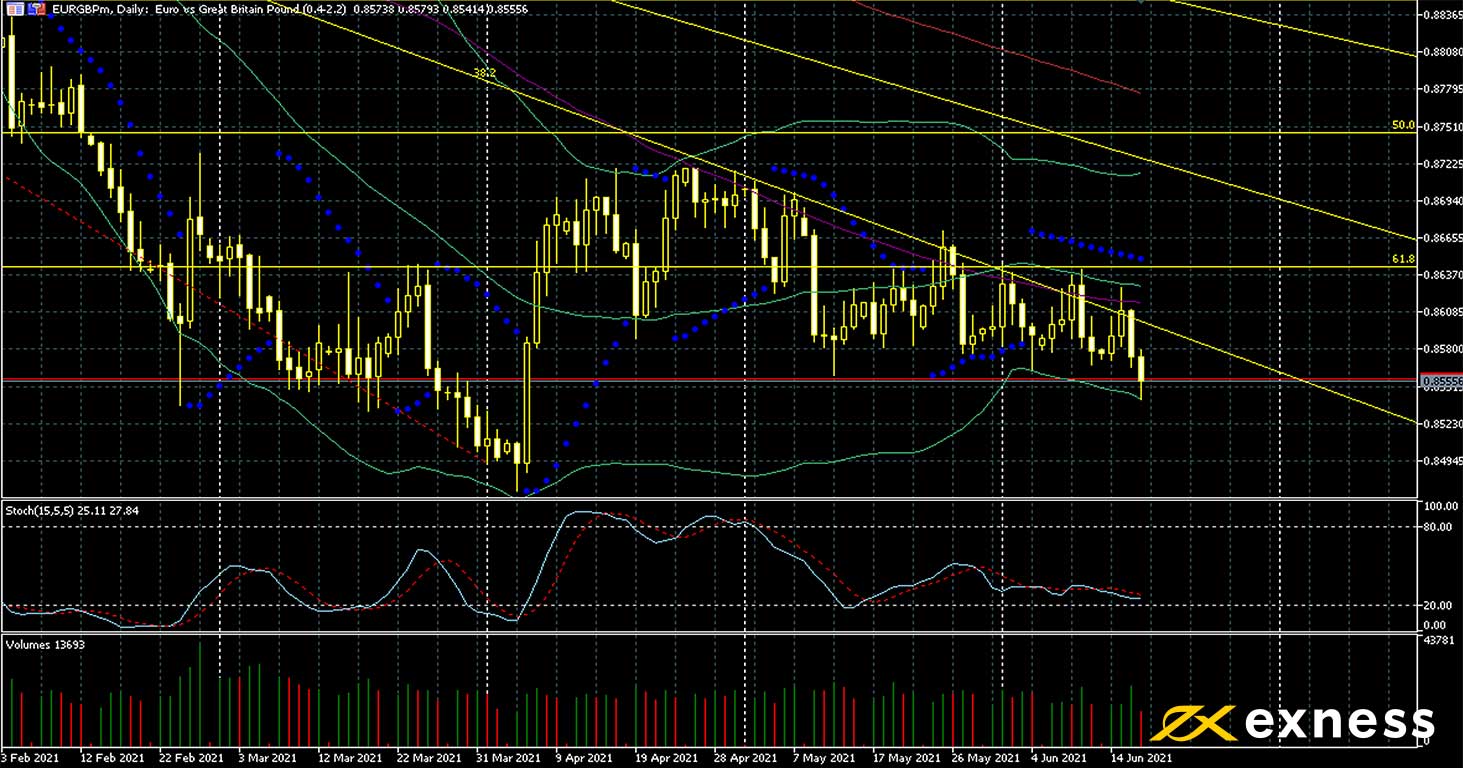 Although there’s no indication that EURGBP will test a significant lower low in the immediate future, the bounce from early April seems to be over for now. Unlike for cable, volume hasn’t increased here this week, but there’s also no oversold signal from either the slow stochastic or Bollinger Bands. Tomorrow’s key data for euro-pound are German PPI and British retail sales, both at 6.00 GMT.

The obvious target for sellers would be around 85p, 5 April’s low and the lowest price since February 2020. To the upside, the 50% zone of the weekly Fibonacci fan might function as a resistance around 87p if the 50 and 100 SMAs are broken through.

Thank you for reading Exness Education’s synopsis of the latest labour market overview! Please join us again next week for more handy aggregations of key reports and how they have affected the most popular instruments. To request a report for summary here, simply leave a comment below any of Exness’ analytical posts on Facebook.

Disclaimer: the publication of analysis is a marketing communication and does not constitute investment advice or research. Its content represents the general views of our experts and does not consider individual readers’ personal circumstances, investment experience or current financial situation. Analysis is not prepared in accordance with legal requirements promoting independent investment research and Exness is not subject to any prohibition on dealing before the release of analysis. Readers should consider the possibility that they might incur losses. Exness is not liable for any losses incurred due to the use of analysis. Past performance does not guarantee or predict future performance.