The Federal Reserve cut its funds rate by 0.5% to 1-1.25% yesterday afternoon at 15.00 GMT. This unscheduled decision was explained as an attempt to shield the American economy from the likely effects of the coronavirus over the next few weeks and months. Exness Education takes a look in this special event recap at how some key charts have reacted to the cut. Stay tuned tomorrow for technical analysis of gold.

Yesterday’s cut came a fortnight before the next scheduled meeting of the FOMC. Although markets had almost universally priced in a cut of 0.5% at the meeting on 18 March, few people had expected an emergency move like this. This is the first emergency cut to American rates since the height of the Global Financial Crisis in 2008.

American indices reacted by making some gains initially, although volatility was high. US500 at 3045 today and USTEC at 8724 are still lower than yesterday’s open. The dollar strengthened slightly overall against some currencies but continued its losses against the euro. 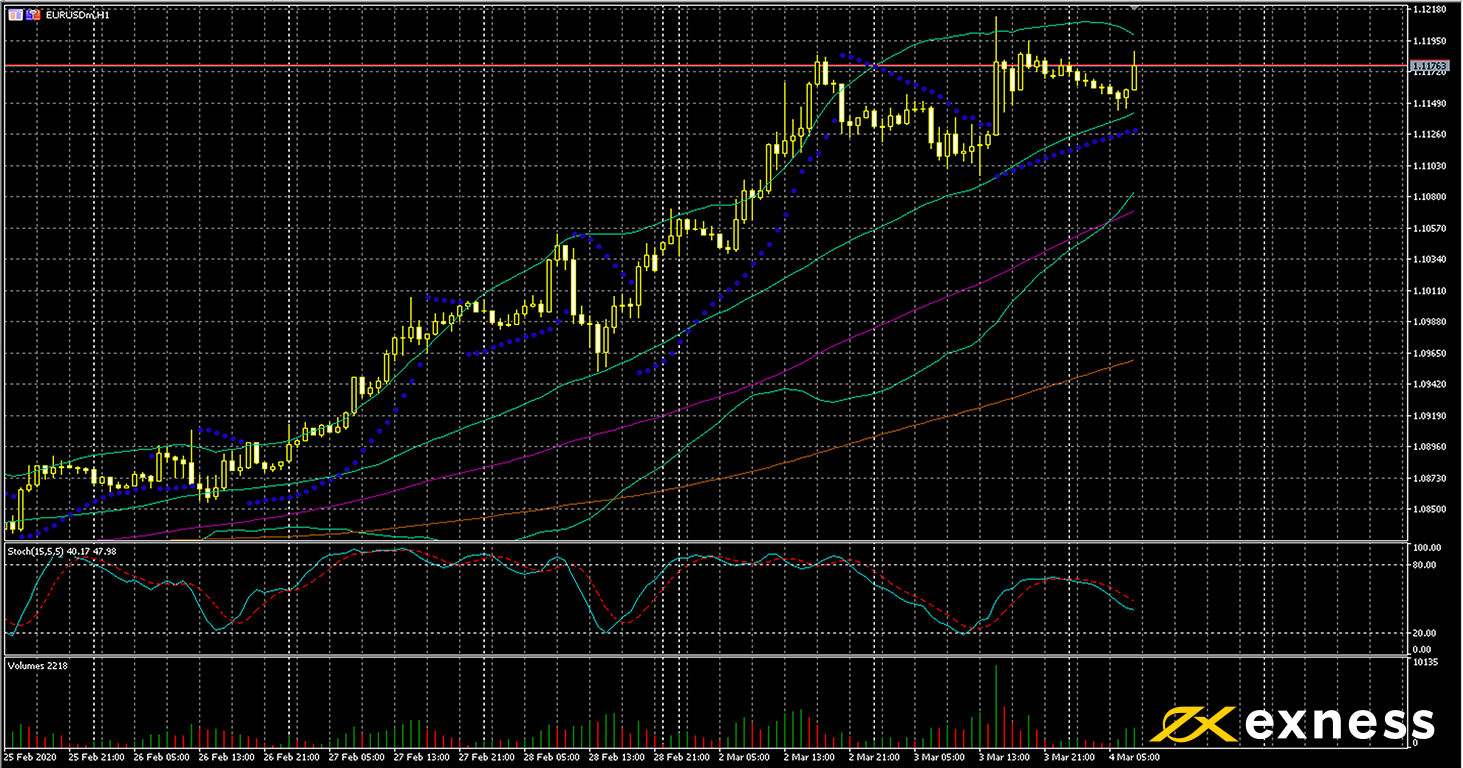 EUR–USD has mostly held recent gains so far today in the aftermath of yesterday’s big news. Click on the image to magnify. $1.117 is close to a month high, with the common currency posting some of its biggest weekly gains against the dollar in over two years.

Some of the most important areas on this timeframe are likely to be the key psychological zone of 1.10 and the three moving averages. A break below the 50 SMA from Bands might indicate a deeper retracement or possibly a reversal of the current trend here; one can observe how each of the four tests of this line have failed since the middle of last week. 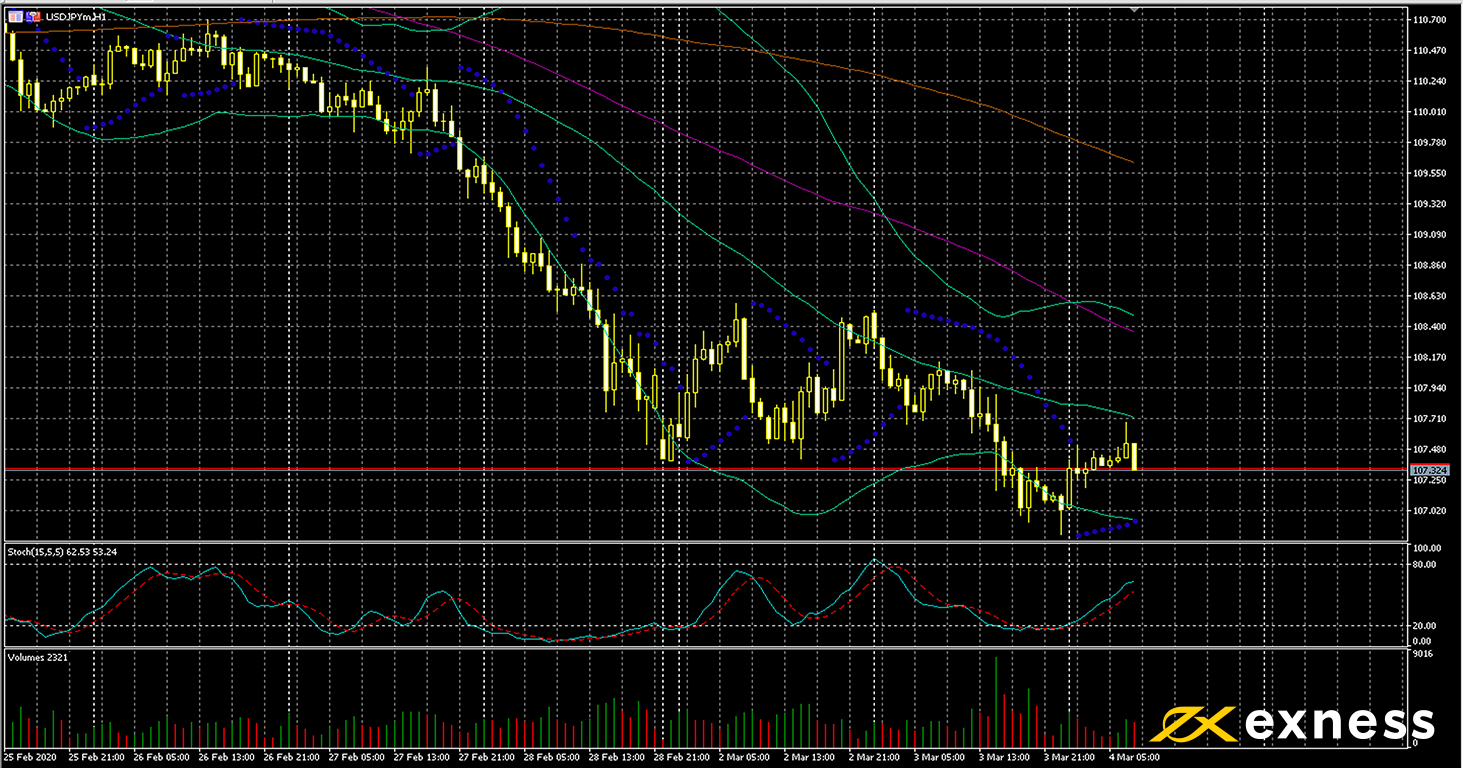 There’s been more losses on the chart of USD–JPY this week although significantly lower momentum than at the end of last month. Click on the image to magnify.

¥107 seems to be a fairly strong support. It had functioned as support to some degree before in summer 2019. Now Bollinger Bands are contracting and volume has decreased, it seems that consolidation and sideways movement on this timeframe are likely in the runup to Friday’s all-important NFP. 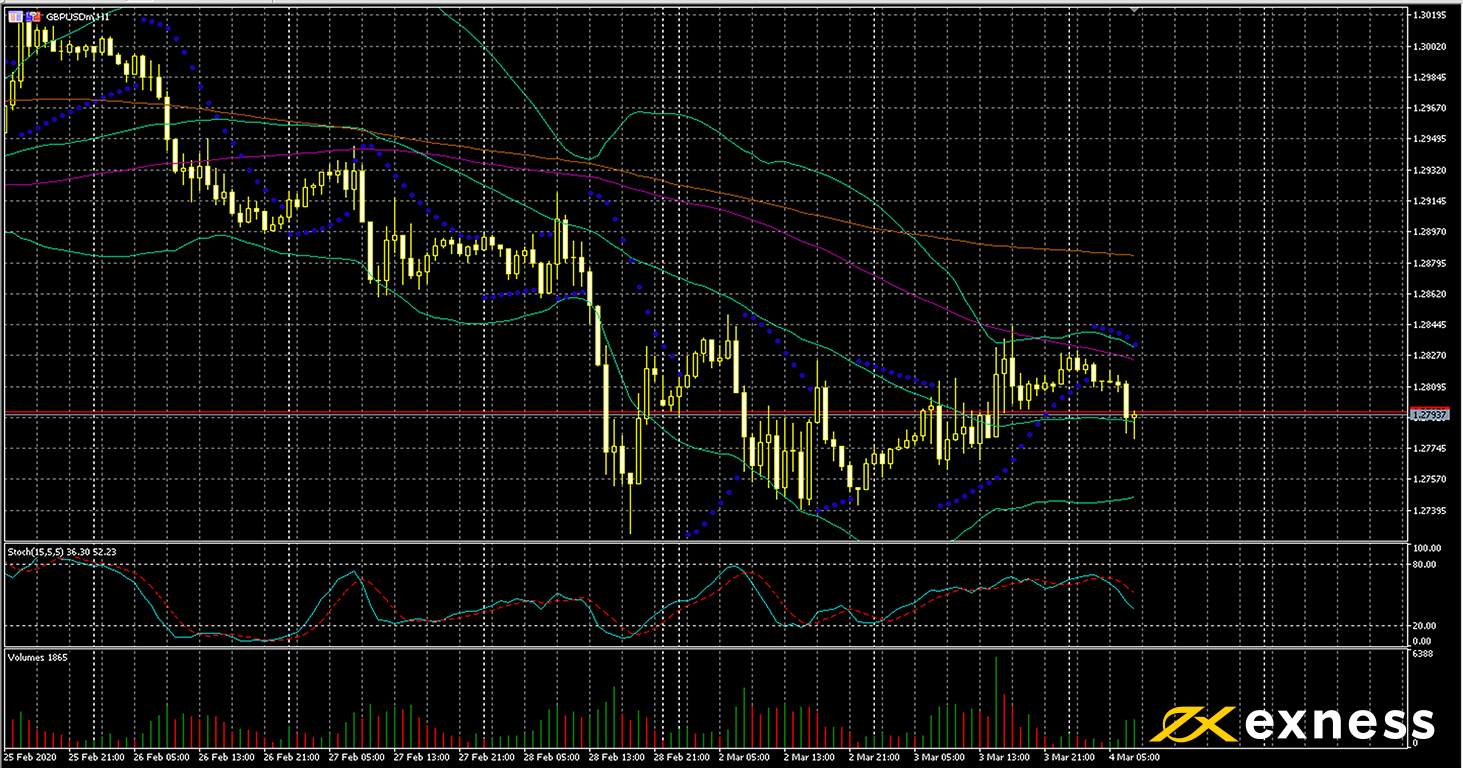 Cable featured a fairly strong initial reaction upward to yesterday’s surprise announcement, but GBP–USD has failed to sustain these gains. Click on the image to magnify.

As elsewhere, the decrease in volume after a sudden spike and the contraction of Bands might mean consolidation over the next few periods at least. On the other hand, the situation of oversold on the dailies and the stochastic possibly about to reach oversold on this timeframe could drive a bounce to some degree before Friday. There’s also the possibility that the BoE will go with the Fed and make its own emergency cut to rates.

What’s next for dollar and other currencies?

The immediate question for traders is whether other central banks will follow the Fed’s lead over the next few weeks. A cut this afternoon by the BoC now seems much more likely.

Another important concern among many traders is why the Fed acted yesterday all of a sudden instead of waiting for the scheduled meeting in two weeks. The RBA managed to wait until its meeting yesterday morning to cut its cash rate to 0.5%.

Whether the Fed will continue to see the American economy as highly vulnerable to Covid-19 might be determined in part by upcoming data. Friday’s NFP remains the week’s most important regular release for markets.

If you’ve never traded before around key data or during high volatility, Exness Education strongly recommends that you practise first on a demo account. This type of account can be very helpful for new traders because it allows you to test your strategy without the possibility of losing real funds.