Midweek data preview: German sentiment and US GDP in view

Midweek data preview: German sentiment and US GDP in view

This week started with focus on a possible resurgence of covid-19 in recovering areas such as Germany and northern China. So far this hasn’t had a significant impact on any major instrument, though. Various countries’ data yesterday and earlier today have indicated monthly growth in business and manufacturing or at least easing of the slowdowns. This midweek data preview takes a closer look at the charts of EURAUD, XAUUSD and GBPTRY.

The main event among central banks last week was the CBRF’s decision to cut its key rate by 1% to 4.5%. The PBoC meanwhile left its annual loan prime rate on hold yesterday morning against expectations for a small cut. There are no less than six relevant meetings coming up this week: the Magyar Nemzeti Bank this afternoon, the RBNZ, the Bank of Thailand and the Czech National Bank tomorrow and most importantly the CBRT and Banxico on Thursday.

All of the regular manufacturing and service PMIs so far this week from Australia, Japan, France, Germany and the UK have beaten expectations, in some cases quite significantly. Some countries such as Australia, France and the UK have returned to monthly growth based on these releases.

The critical data to come this week is from Germany. June’s Ifo business climate tomorrow morning is expected to improve somewhat, while July’s GfK consumer confidence has a consensus for bigger improvement while remaining in negative territory. American quarterly GDP growth on Thursday afternoon GMT is this week’s central release for gold and the dollar. 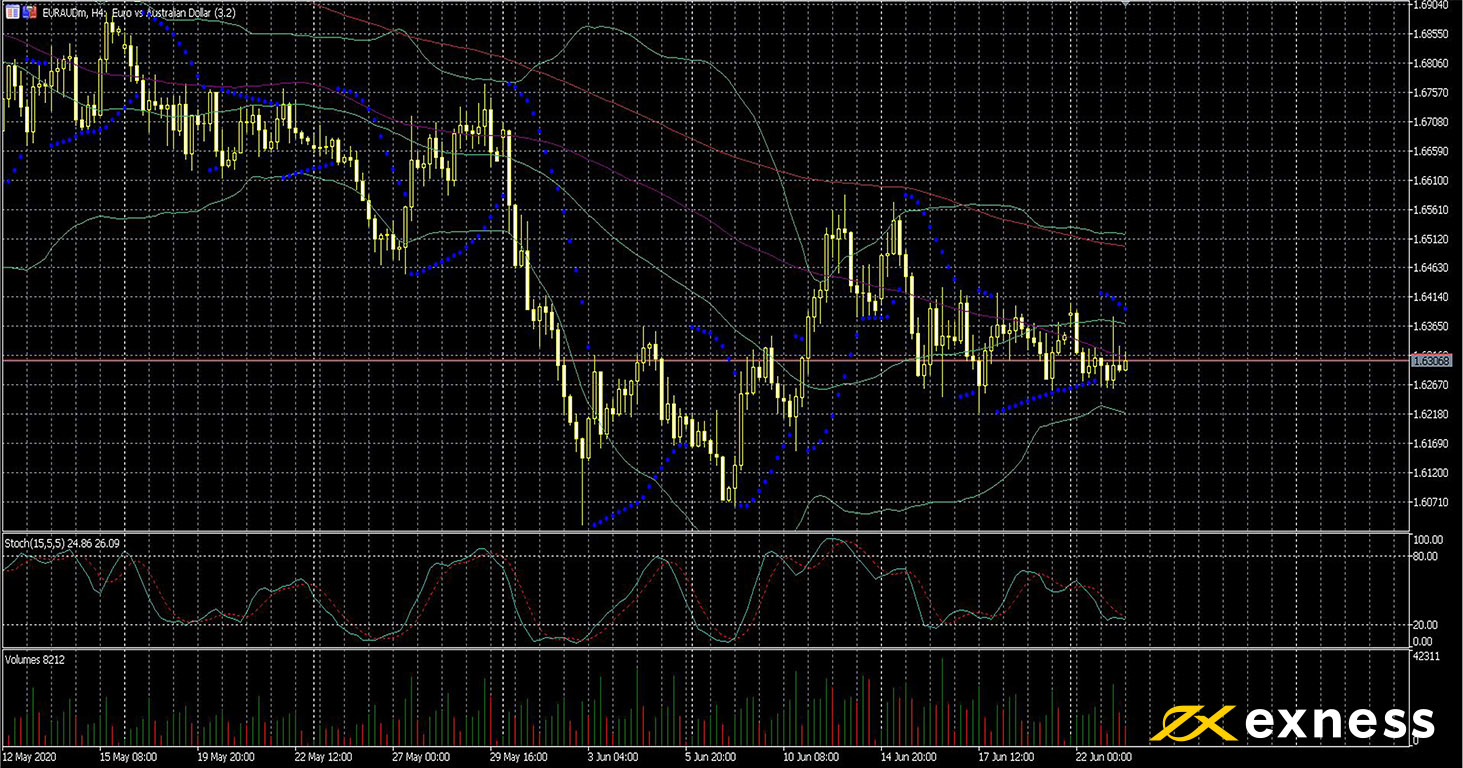 EURAUD has continued its recent consolidation so far this week. Click on the image to magnify. Reports of a new outbreak or second wave of covid-19 in Germany seem to be premature: given the containment of the virus throughout the country, the recent local outbreak is sufficient to raise the R level for the whole country. Data from Australia has clearly been better this week than comparable releases from the eurozone; the RBA also has more available ammunition to jumpstart the economy than the ECB.

From a technical point of view, there seems to be a support near A$1.625, slightly below the current area. Moving averages continue to print a sell signal although the golden cross of the 50 from Bands and the 100 might signal a bounce over the next few periods. Short-term trading is likely to be in focus here as for many other symbols this week, not least because of the key German data over the next two days. 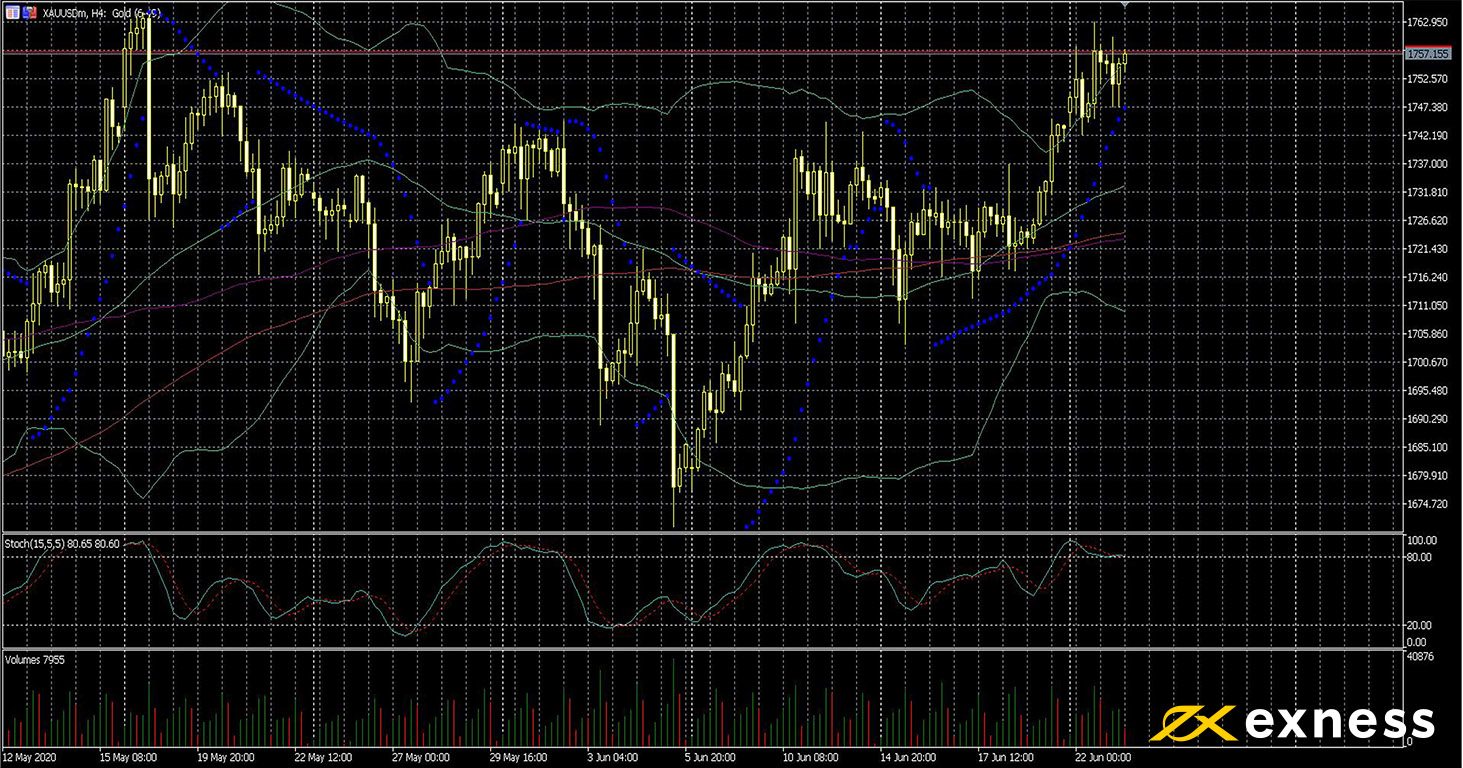 Gold has made gains in most of its pairs since the end of last week. Click on the image to magnify. Less overconfidence in shares plus near-zero rates in most advanced economies make the yellow metal attractive. So far, there’s no clear indication of a general jump in inflation as a result of quantitative easing, but traders of gold are likely to monitor inflation data from the G7 closely over the next few weeks.

Based on TA, more gains seem to be possible but probably not in the immediate future. This is because there’s clear buying saturation based on Bollinger Bands and the slow stochastic. While buying volume remains fairly consistent with May’s average, most traders who don’t focus on the short term will wait before buying around these levels. The next key target for buyers would be the breakout area of $1,800. Important data from the USA this week, primarily final quarterly GDP on Thursday, could have a significant impact on this chart. 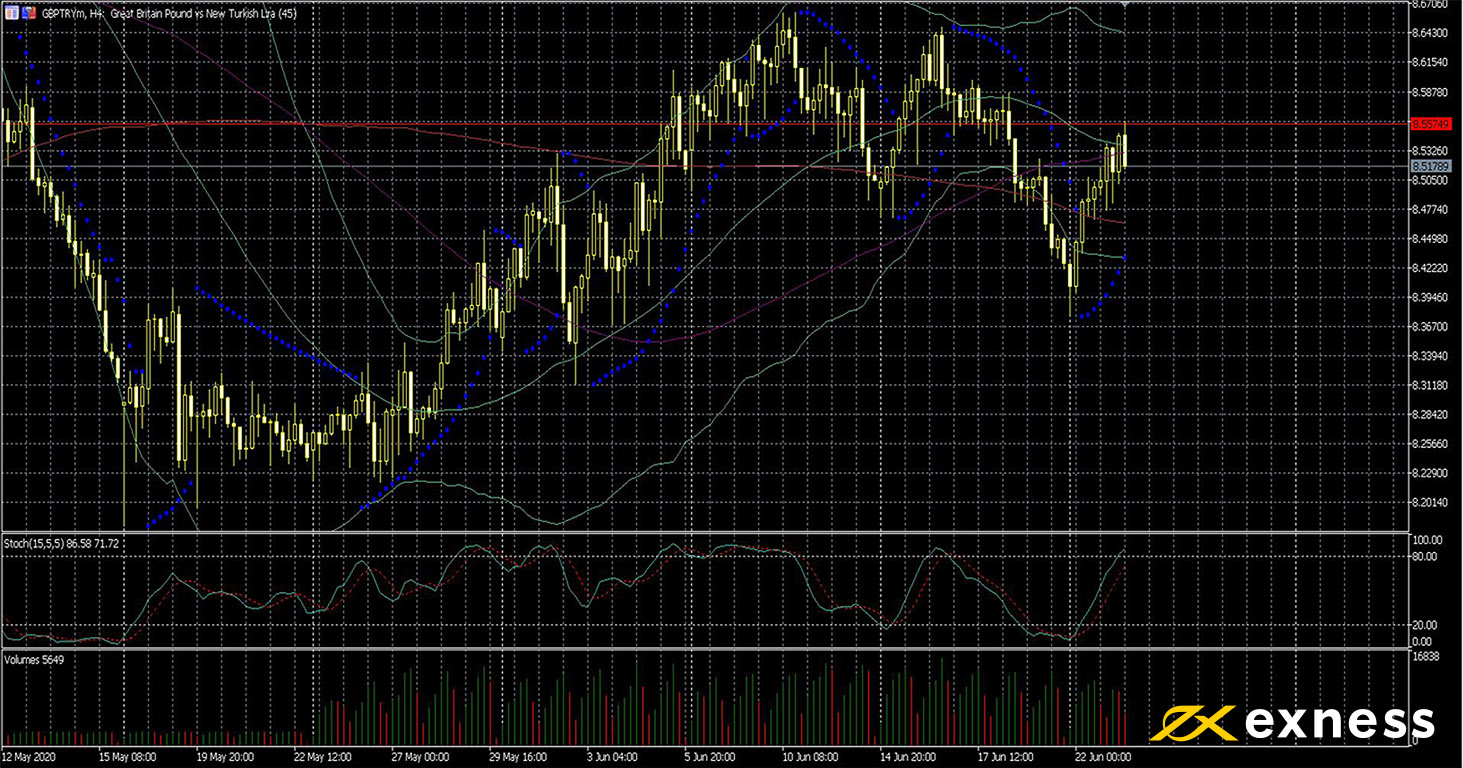 GBPTRY has been somewhat volatile since last week. Click on the image to magnify. British PMIs this morning beat the consensus estimates quite well while yesterday’s Turkish consumer confidence was somewhat weaker than expected at 62.5. Last week’s economic releases from the UK were very weak, though, including over half a million upward change in claimants on Tuesday against the consensus of about 370,000. Q1 2020 featured the worst total contraction in British manufacturing since at least the 1970s.

On the other hand, Brent reached a new high above $43.50 this morning. Rising prices of oil usually weigh on the lira because Turkey is completely reliant on imported crude oil having negligible reserves of its own. From a general fundamental perspective, then, ongoing direction is unclear.

The chart doesn’t give a particularly clear picture either. Although volume has been much higher since last May, there has been no serious attempt yet to break ₺8.65 let alone challenge the record high slightly below ₺9. Price has seesawed between overbought and oversold over the last week although a higher low was established on Friday night. With no significant British data this week, all eyes are on the CBRT on Thursday and particularly whether there’ll be a bigger cut than 0.25% to the one-week repo rate.

Thank you for reading Exness Education’s midweek data preview! Join us again later in the week for more analysis of active instruments. Don’t forget that you can request a symbol to be covered in insights by commenting on Facebook.