Various markets have clearly entered risk off mode this week as the spread of the coronavirus outside China has increased. The tone has changed significantly for instruments like oil and indices since Friday’s close.

The key data that’s already been released this week was from Germany. Monday’s Ifo Business Climate for February was somewhat better than expected at 96.1. This morning’s German GDP growth (annual and quarterly) were both in line with expectations.

Central banks were fairly active last week, with both the People’s Bank of China and the Central Bank of the Republic of Turkey cutting rates. The CBRT cut to 10.75%, in line with expectations, while the PBoC cut its loan prime rate to 4.05%. A cut of 0.1% by the PBoC turned out to be half of what was expected, indicating that the PBoC has a somewhat greater level of confidence in the economy than many observers.

So far this week the Bank of Israel has left its benchmark rate on hold at 0.25%. The Magyar Nemzeti Bank is expected to do the same this afternoon, keeping its base rate at 0.9%. 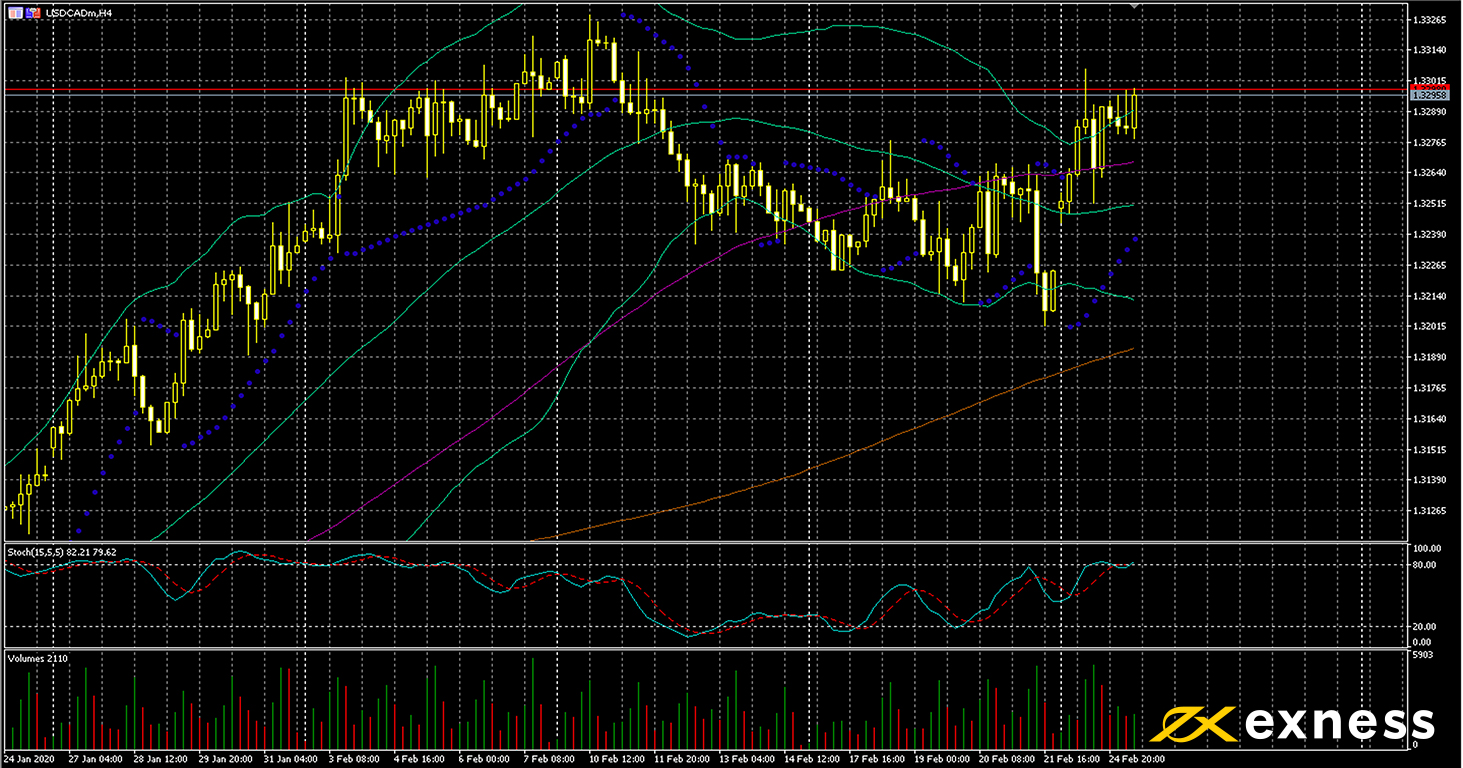 USD–CAD has resumed its gains so far this week based mainly on fundamentals. The large drop in the price of oil since yesterday has hit the loonie hard in many of its pairs. Data from Canada last week was pretty good, though. Annual inflation for January beat expectations at 2.4%. Canadian annual core inflation was also in line with the consensus at 1.8%.

It seems fairly likely from a technical perspective that more gains could be in store here. The consolidation seems to have ended, with price breaking above the 50 and 100 SMAs since the gap up at yesterday’s open. Buying volume increased significantly on Friday and Monday. Traders will be watching saturation here, though. Price outside the upper deviation of Bands and within the overbought zone of the stochastic mean that this is unlikely to be a favourable entry. 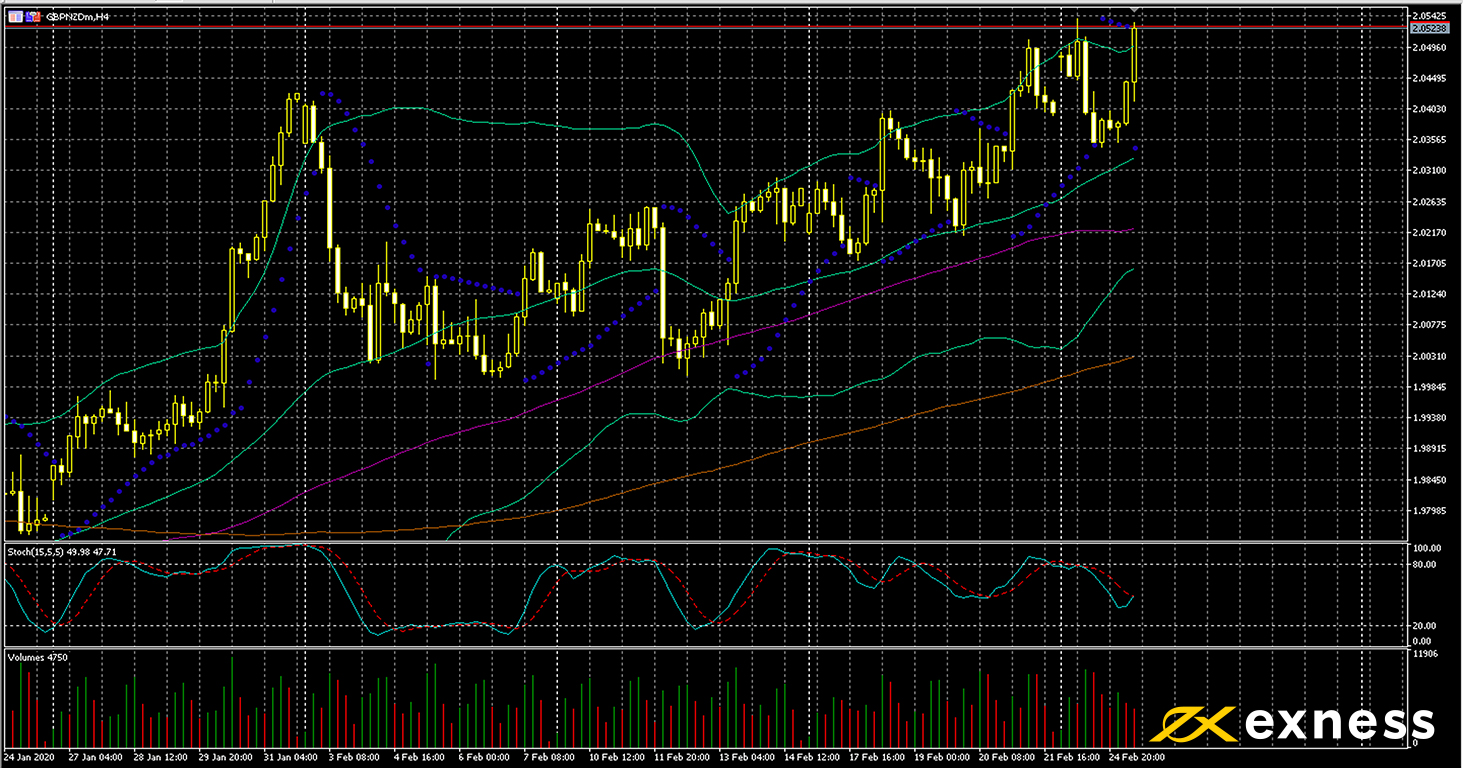 The pound has been in a fairly strong uptrend for some weeks now against the Kiwi dollar. This comes despite ongoing instability for the pound in some pairs due to UK-EU trade negotiations. Conversely, the Kiwi dollar has been hit harder by a possibly weaker outlook for trade. Demand for dairy products and other exports in China, New Zealand’s biggest trade partner, has decreased amid the coronavirus. New Zealand’s main index of shares also lost around 1.2% in today’s session.

GBP–NZD is approaching an important area of resistance at the time of writing based on the daily charts. 2.05500 was the limit of the pound’s gains in the middle of October last year. Traders’ focus around the current area is likely to be on volumes as much as saturation. Ultimately, though, fundamentals will probably provide more clarity this week. The most important release is New Zealand’s balance of trade for January tomorrow night GMT. 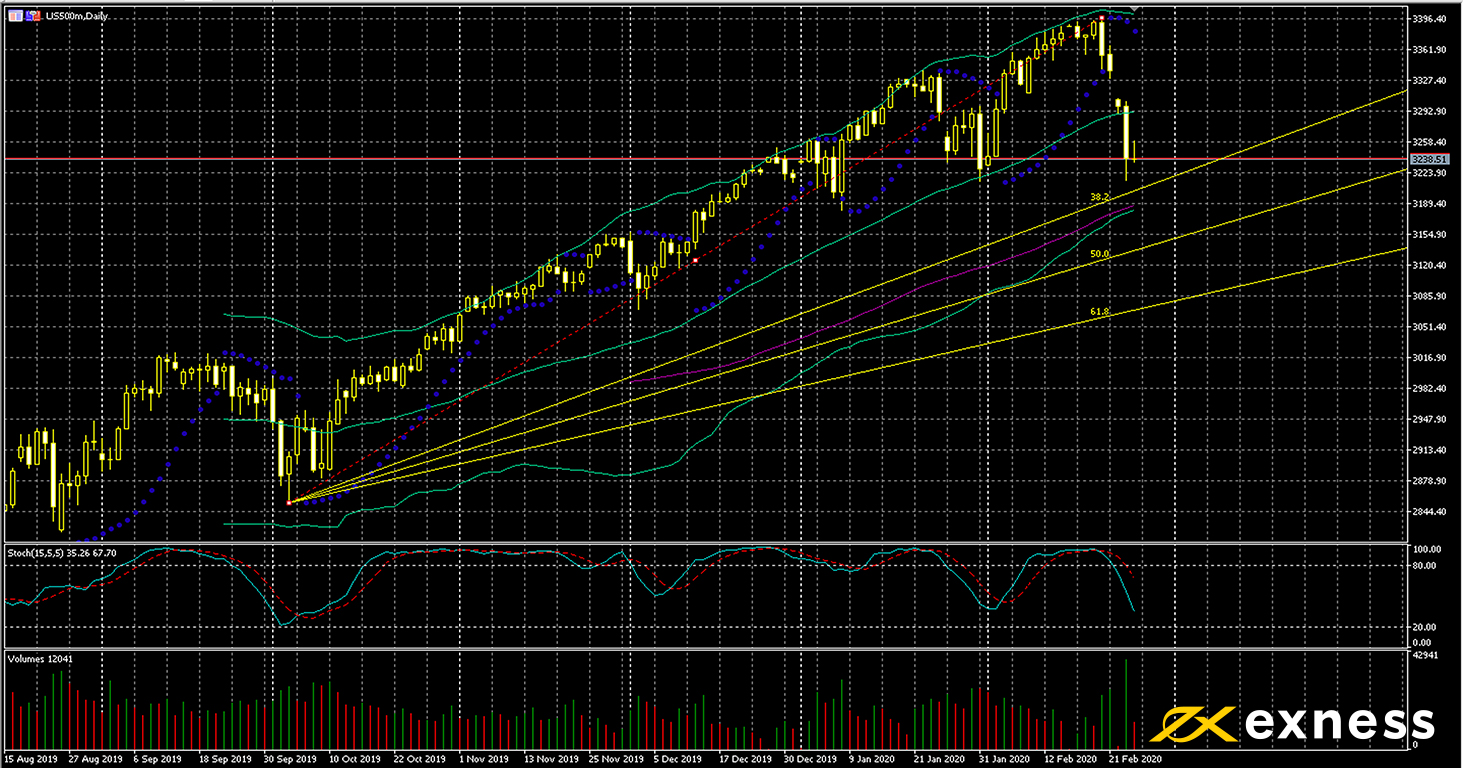 Like most other major and minor indices, US500 has corrected sharply this week so far from recent all-time highs just below 4000. Tech, energy and mining have generally suffered the biggest losses since the start of the week, with various companies withdrawing full-year guidance and cutting outlooks.

Looking at the charts alone, it does seem that there’s more room to the downside. The 38.2% zone from the Fibonacci fan might be a key area this week. The 100 SMA just above the lower deviation of Bollinger Bands could also function as a support. The sudden spike in buying volume in the previous period seems to suggest confidence and a lack of selling pressure, but ‘wait and see’ might be the wisest approach in the next few days given uncertain fundamentals.

Thank you for reading Exness’ midweek data preview! Join us again this afternoon for analysis of gold. Throughout the week we’ll also present more analysis of active instruments.