The key focus of this week’s economic data for forex markets is Friday’s non-farm payrolls. Crucial employment data is also expected from Canada on Friday and New Zealand tonight. Meanwhile the coronavirus remains in focus for many traders although some degree of calm has returned to stock markets. Exness’ midweek forex data preview looks at some of the charts most likely to be affected by the important economic releases in the rest of the week.

So far this week the most important event was the meeting of the Reserve Bank of Australia early this morning GMT. The RBA kept its cash rate on hold at 0.75% as widely expected; the Aussie dollar continued to recover in most of its pairs after this announcement. 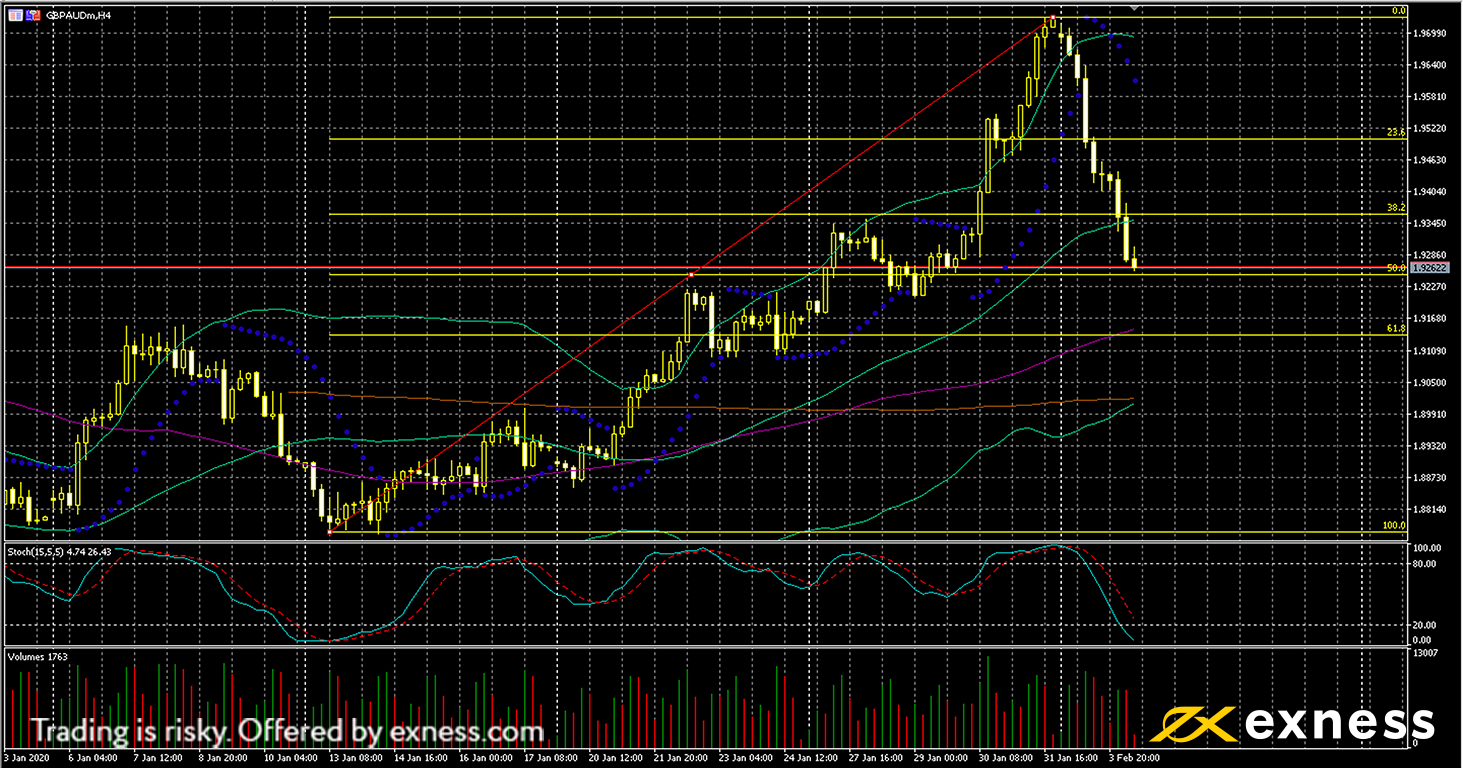 There’s a combination of important factors in focus here, with both renewed uncertainty over the UK’s trade relations and the RBA’s comparative optimism playing key roles so far this week. GBP–AUD has retraced quite sharply from three-year highs above A$1.97 as Boris Johnson appears to have reopened the door to a hard Brexit in terms of trade as of yesterday.

The RBA’s meeting this morning also revealed that Australia’s central bank is still pretty positive about the domestic economy, certainly more so than markets had been expected. The forecast for growth in GDP this year was left unchanged at 2.75% and the bank also didn’t cut its forecast for next year of 3%. The statement from Governor Philip Lowe indicated that the Board expects that the impact of the bushfires and coronavirus on Australia’s economy will only be temporary.

From a technical perspective, a retracement sooner or later had looked favourable since last week. Price had moved clearly into overbought based on both Bands and the slow stochastic. In the short term, the most important area on this chart will probably be the confluence of the 38.2% Fibonacci retracement area with the middle line of Bollinger Bands.

A break significantly below $1.935 might result in price consolidating lower over the rest of the week. Balance of trade from Australia just after midnight GMT on Thursday is the crucial release this week. 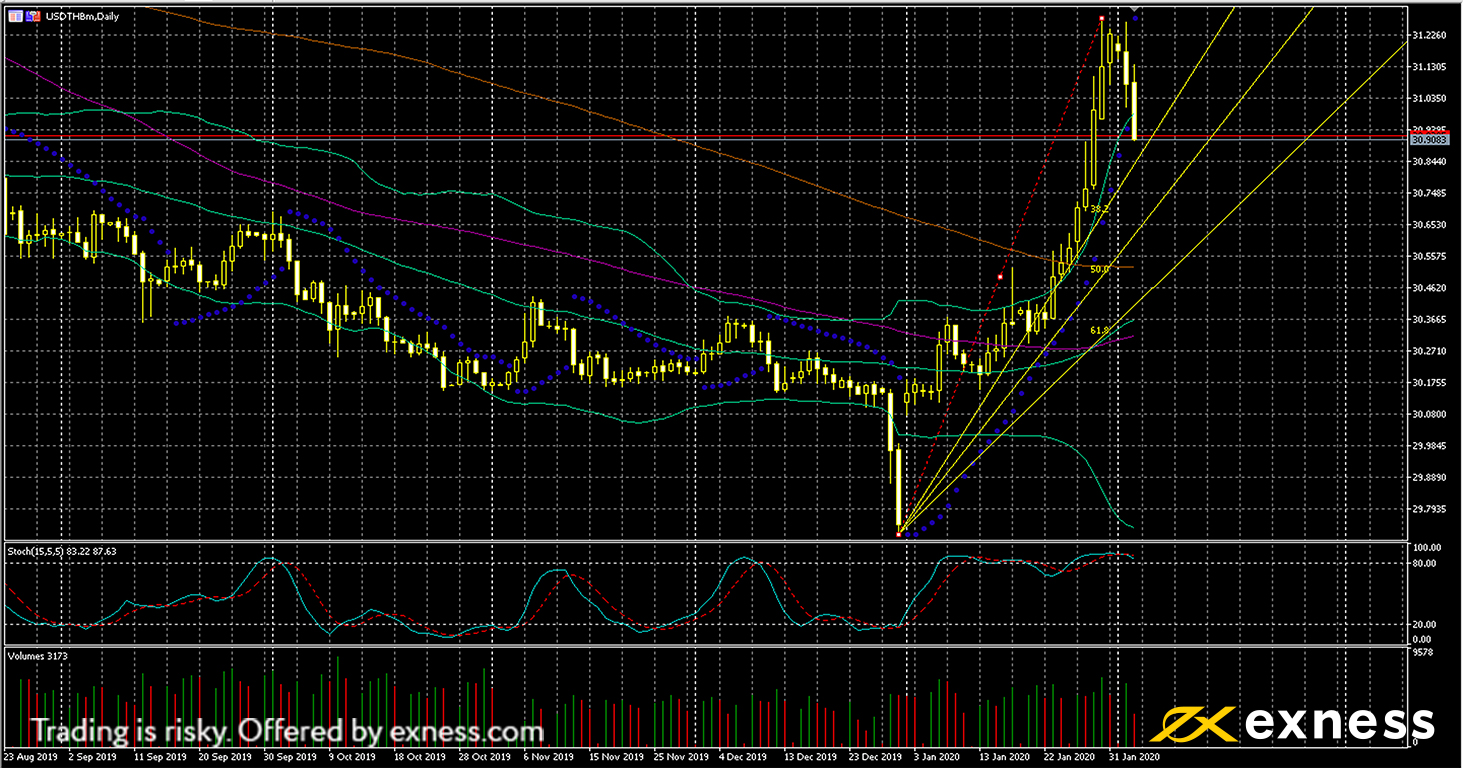 January in general was a very challenging month for the baht. Thailand’s currency is usually quite vulnerable to sudden changes in risk appetite, and the growing outbreak of the coronavirus was no exception to this general rule. Investors in Thai assets as well as traders had a shock as various markets moved into panic mode. Relatively low impact on American indices and the dollar have also contributed to the unusual shape of this chart.

Despite a very bad month for THB, overall the trend for USD-THB has been downward for many months now, in fact most of 2019. The Bank of Thailand (BoT)’s very large foreign reserves and Thailand’s large current account surplus are factors in favour of the country’s ability to withstand outflows of capital better than many other emerging economies.

The downward trendline corresponding to the overall movement since late 2016 would be immediately above the current area on the weekly chart. Even if price does manage to break through this in the near future, it’s not unlikely that losses could resume; it might just be a blip amid panic in markets over the coronavirus. The Fibonacci fan indicates some of the areas that might be important over the rest of the week, with the 50% and the 61.8% likely to be initial targets for sellers.

The BoT meets for the first time in 2020 tomorrow morning GMT. No change to the current repo rate of 1.25% is expected. Although comments on the impact of the coronavirus are likely to be key at the bank’s meeting, traders should also watch carefully for any hint that the BoT might move to spend some of its huge foreign reserves in an attempt to improve economic growth. 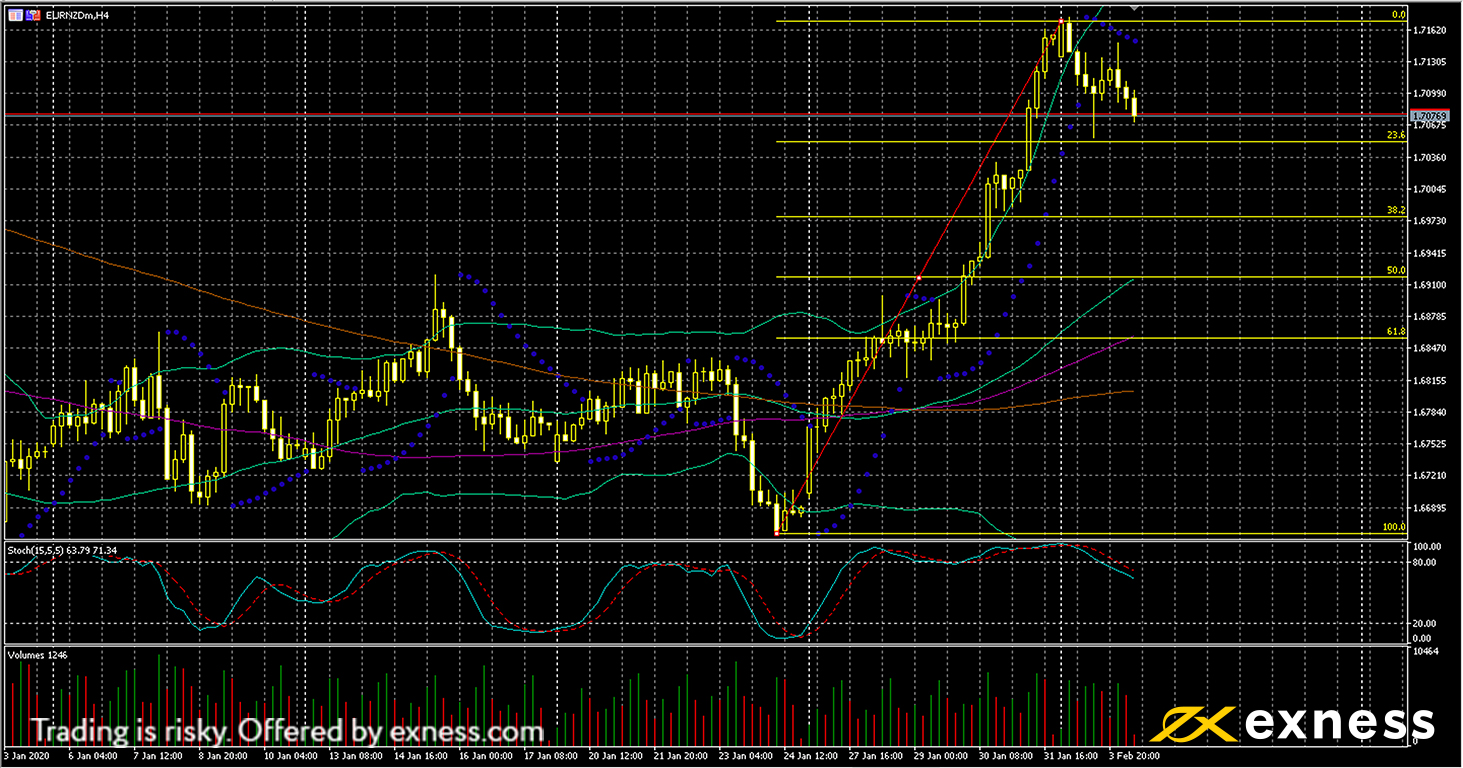 The euro’s movements against the Kiwi dollar are pretty similar to GBP–AUD as studied above. The main difference is that a potentially chaotic end to the Brexit transition at the end of the year isn’t so much of a concern for the eurozone as the UK. The RBA’s relatively upbeat outlook this morning has given some support to NZD because the RBNZ typically tends to mirror the policies of its Australian counterpart, facing similar challenges.

Some continuation upward seems to be possible here. There is no crucial psychological resistance above the previous high. One should also note that the angle of the current consolidation is obtuse; the shape is quite different from the equivalent timeframe of GBP–AUD. The most important event this week that might produce a clearer continuation (or deeper retracement) is tonight’s quarterly unemployment data from New Zealand.

Thank you for reading Exness’ midweek forex data preview. Please do join us again on Friday for a roundup of the week’s most important events.