Stock markets have generally retraced some of their recent losses since yesterday after the American Congress reached agreement on a package of economic stimulus. The deal is worth around $2 trillion, billed by the governing Republicans as a way to protect Americans from the worst of the upcoming recession.

While most American shares reacted positively to the news and gold also made a large gain yesterday, neither benchmark for crude oil has managed to hold significant gains so far this week. The ongoing price war between Russia and Saudi Arabia doesn’t seem likely to end soon. Shocks to demand as travel of all kinds declines sharply are also an important negative for oil.

During this time of crisis, many traders will be focussing on the short-term, specifically daytrading and scalping. While the risk of holding many positions overnight is not necessarily unacceptable, crude oil could return to its previous volatility at any moment. 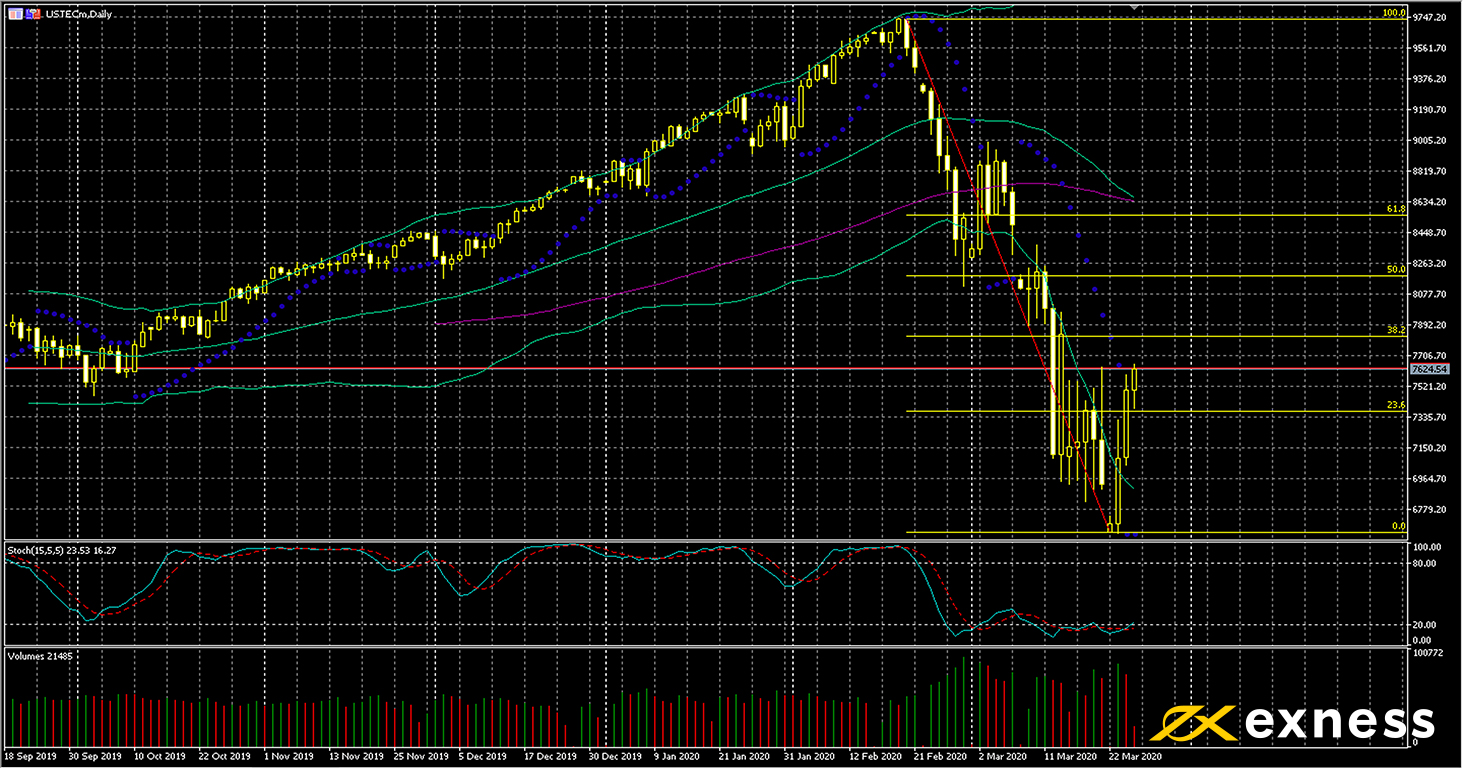 USTEC like most other major indices has bounced fairly sharply so far this week. Indices have reacted positively to yesterday’s news from Congress especially because the stimulus involves support for families (i.e. shoring up consumer spending) as well as businesses. Demand for tech is likely to be lower in Europe in the near future for obvious reasons, but in east Asia the direct effects of the virus appear to be decreasing.

Price is no longer oversold based on Bollinger Bands (50, 0, 2) or the slow stochastic (15, 5, 5). One can see two successive closes inside Bands, although the stochastic at around 24 is very close to the zone of oversold. Selling volume has also increased significantly this week, suggesting that many traders have given up trying to ‘catch the knife’ and are instead trying to sell the bounce.

The various Fibonacci retracement areas could be key for USTEC into next week. A daily close above the 38.2% retracement could signal a more extended phase of consolidation. Volatility will probably remain high throughout the rest of the week, though. 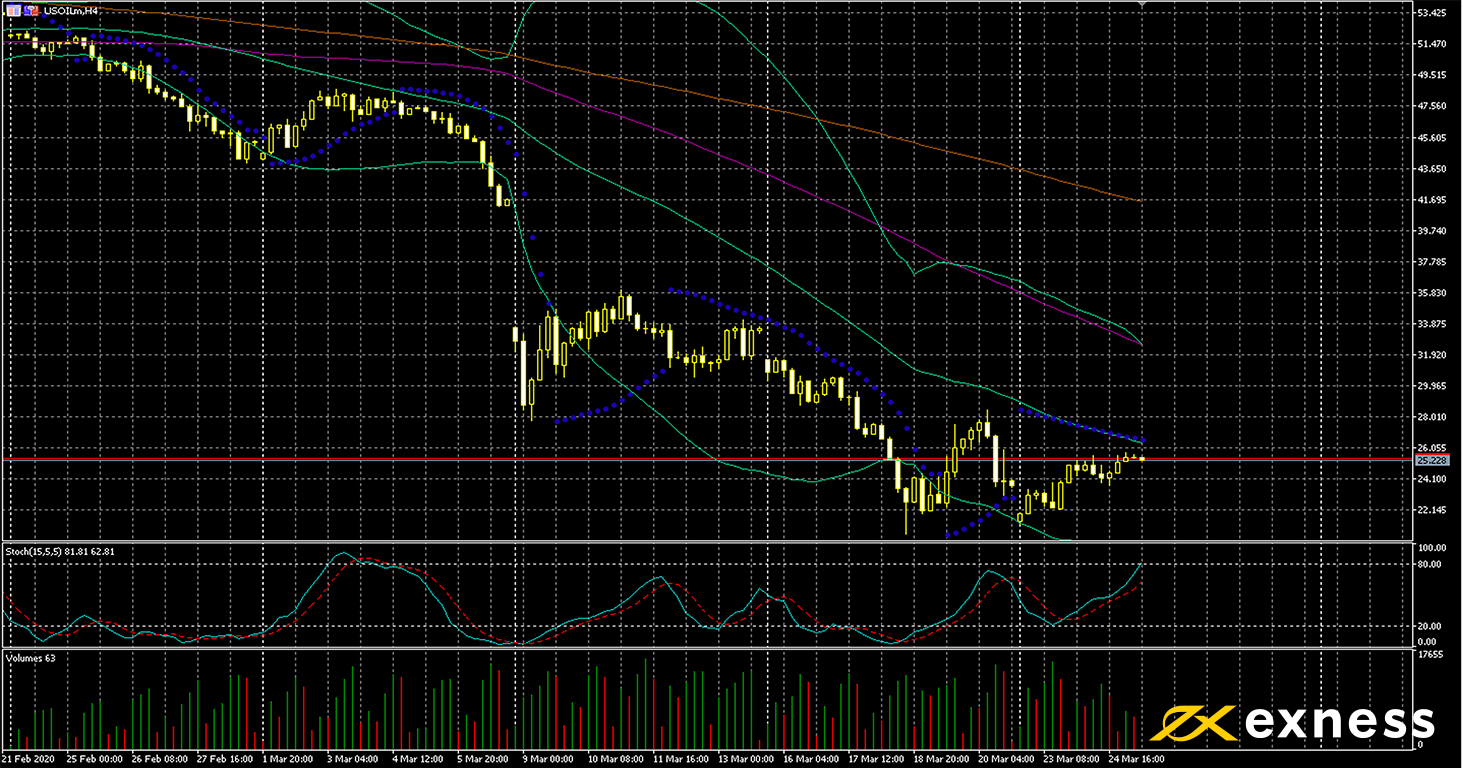 The American benchmark for crude hasn’t moved much on yesterday’s news. One would typically expect oil to make some gains as indices generally move up, not least because better performance by companies can translate into increased demand for energy to make more products. On the other hand, quarantines and bans on travel have scuppered demand among airlines. Russia and Saudi Arabia are still at odds for now with their race to the lowest price.

From a technical point of view, there does seem to be some strength since the second half of last week. The slow stochastic has almost reached overbought now. Selling volume has also dropped off this week to a degree.

The crucial hurdle for buyers is the 50 SMA from Bands. This has functioned as a strong resistance on this timeframe since the second half of February. Many buyers will probably wait for a close above this zone, currently around $26.33, followed by a consolidation to enter. 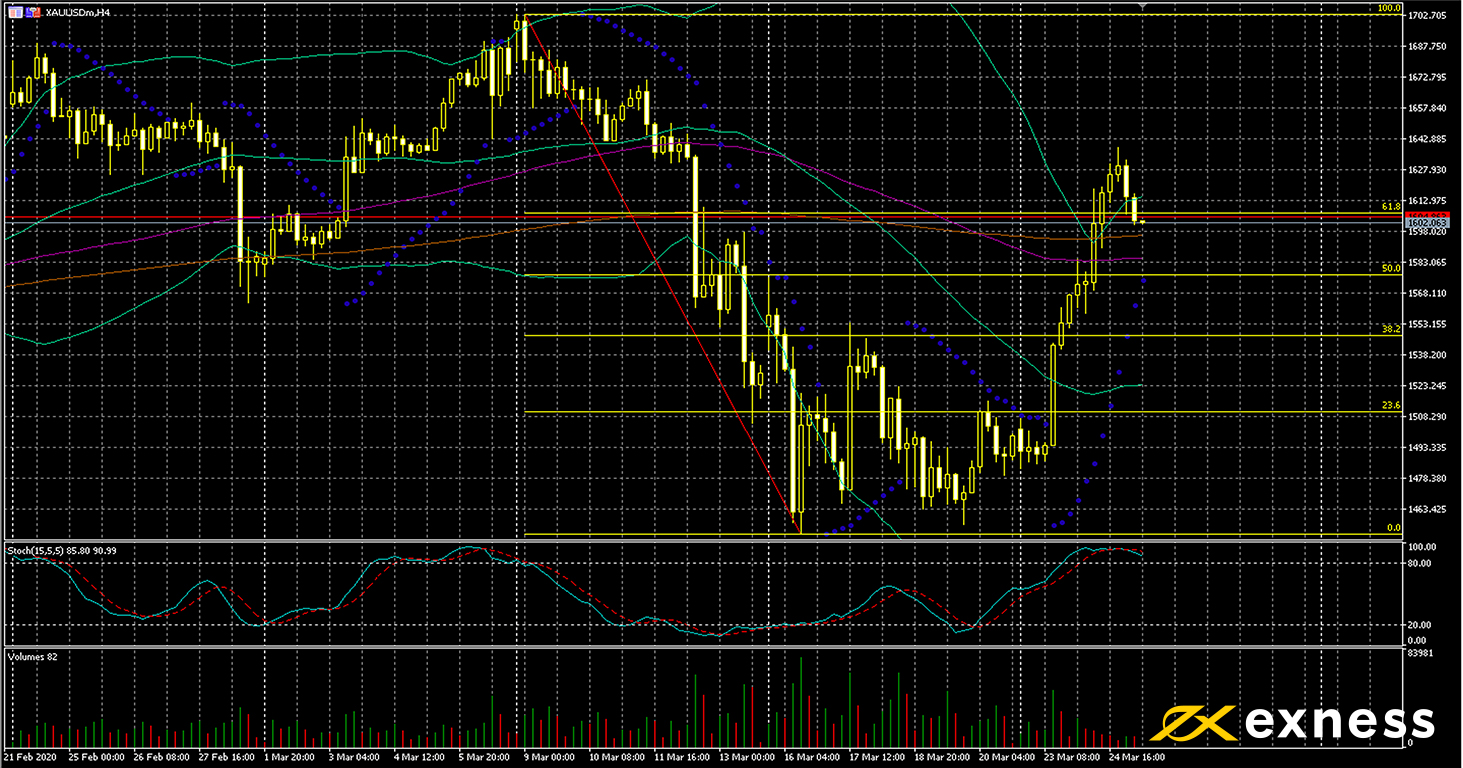 Probably the most obvious action that comes to many traders’ minds during economic crises is to buy gold. Historically, though, gold usually makes losses during the first stage(s) of any crisis and only later starts to move up. So far, this pattern remains in view for XAU–USD this time round. The prospect of an extended recession amid very low interest has driven traders to this haven after the initial shock. From a fundamental viewpoint, though, yesterday’s agreement on stimulus was negative for the yellow metal.

The main wave of panic selling now appears to be over. That said, short-term money seems to be in control here as for many other instruments, so as of right now an extended breakout in either direction isn’t favourable. The 61.8% Fibonacci retracement area could be established as a resistance for the next few days if price fails to hold above it for a significant time.

Any buyers wishing to enter after a consolidation would need to monitor saturation carefully. The slow stochastic prints a clear overbought signal and price remains very close to the upper deviation of Bands. The ‘value area’ between the 100 and 200 SMAs could be the focus into next week.

Thank you for reading Exness Education’s midweek technical summary! Check back on Friday and next week for more analysis of the most active symbols.