It’s 2021’s first NFP today! As the dollar has continued to weaken against most major currencies, some traders will be hoping for a better result from December’s release. On the other hand, various factors seem to be stacked against a bounce for the dollar after today’s non-farm payrolls. This NFP preview considers both the general situation and a closer analysis of AUDUSD and XAUUSD. Thank you EdiSon Miranda Monzón and Axmad Cabdi for requesting these symbols!

The general lack of interest in buying the dollar over the last few months comes in the context of ‘cash is trash’ remaining the dominant narrative. Most blue chip shares posted at least some gains in the fourth quarter of 2020, while bitcoin surged upward. Record low interest rates and generally some of the loosest monetary policy ever are expected to lead to rising inflation in the USA this year, meaning that few people have seen much reason to hold the greenback.

Apart from the Fed’s abandonment of its formal target for inflation last summer as discussed at Jackson Hole, fiscal stimulus in the USA is expected to contribute to at least a modest rise in inflation this quarter. Questions also remain as to how incoming President Joe Biden might handle the Sino-American trade dispute. In short, there are many uncertain factors about which traders might receive more information over the next few weeks.

November’s NFP came in at 245,000, only a bit more than half the consensus of approximately 470,000. In some respects, though, slowing creation of jobs in the USA is not surprising. Demand in various areas such as entertainment and hospitality plus obviously transport collapsed in 2020. This in turn has meant that not all of April’s 20.8 million job losses, the worst ever NFP since records began in 1939, could be made good in 2020.

The consensus for this afternoon’s release is 71,000, although some forecasts go as high as about 110,000. The rate of unemployment in the USA meanwhile is expected to remain nearly static at 6.7% or 6.8%. If these expectations are broadly correct, there still might not be a sharp selloff for the dollar: it’s already strongly oversold in many of its pairs and most participants will be expecting fewer jobs created. Charts might suggest some of the key areas to watch later today. 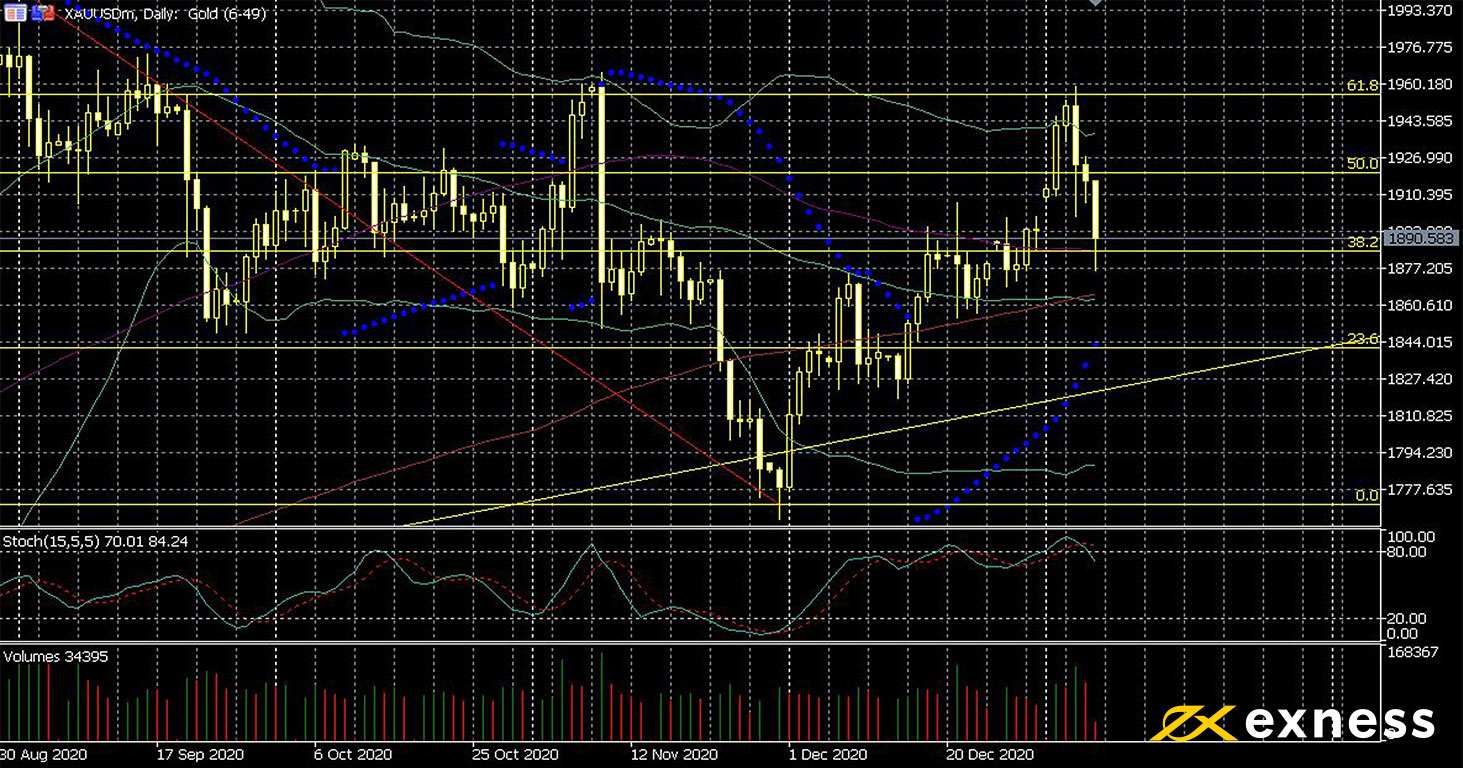 Gold posting fairly sharp losses on the morning of the NFP would traditionally be taken to indicate that most participants in the market expect a strong result that might boost the dollar. However, the yellow metal has been generally somewhat volatile over the last few months. One should also note that the signal line of the slow stochastic (15, 5, 5) remains within overbought.

Ultra-easy monetary and fiscal policy with the accompanying expectations of an uptick in inflation this year are only one side of the story for gold’s fundamentals. The other is that macroeconomic disorder and risk are generally decreasing somewhat now that vaccines are beginning to become available in significant numbers around the world.

Considering today’s NFP specifically, the main area of focus is likely to be between the 50% and 23.6% daily Fibonacci retracements. This is obviously a large zone, so news traders might be well served by keeping positions as small as reasonably possible and of course setting stops. Based on last month’s release, there might simply be volatility without any clear direction for a few hours after the release; a significant gain beyond the 50% Fibo today looks unlikely barring unusually negative figures. 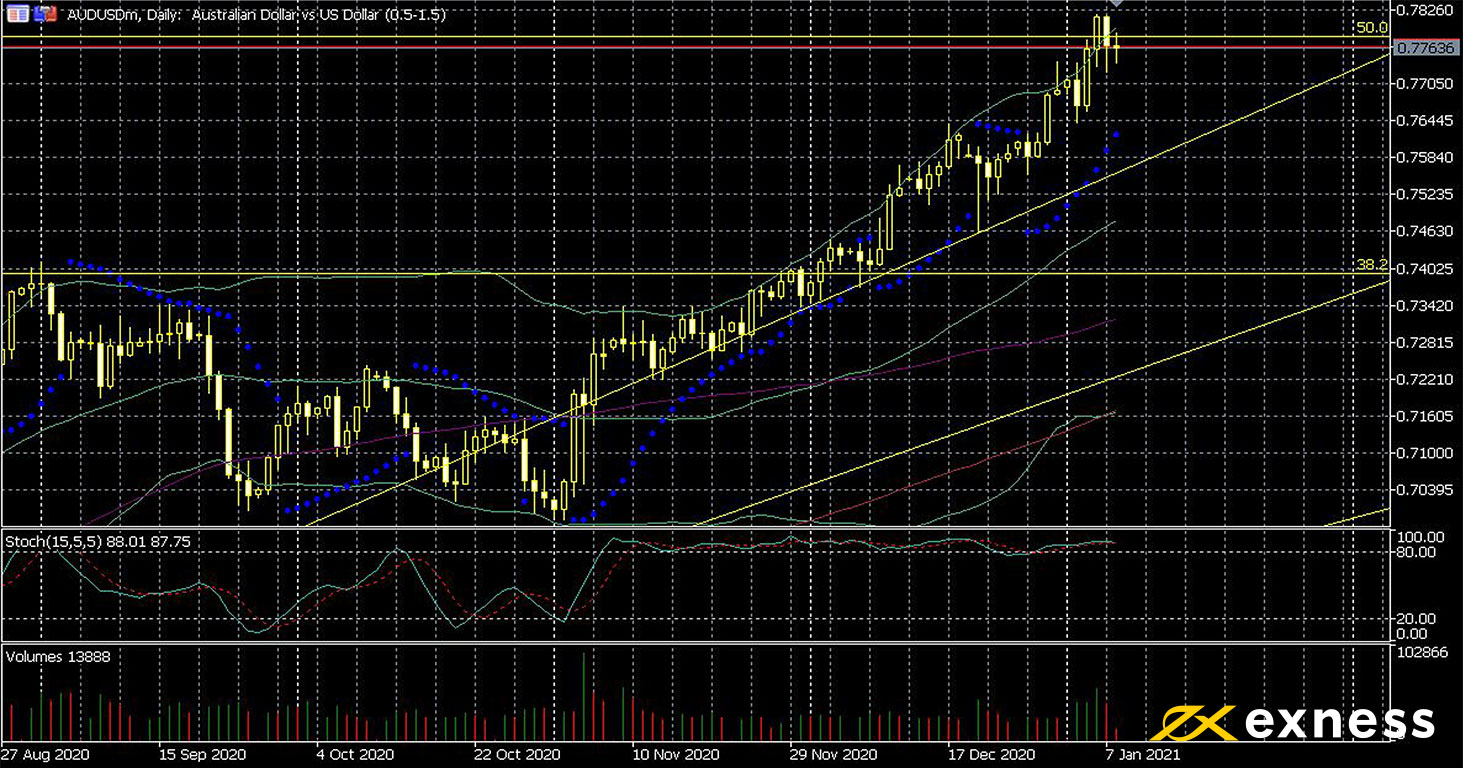 Usually considered a ‘risk on’ currency, the Aussie dollar has enjoyed an extended phase of strong gains against its American counterpart. Recovery in China, the destination of the lion’s share of Australia’s exports of raw materials, and relatively competent handling of covid down under have boosted AUDUSD to three-year highs. The diplomatic problems in November and December between Australia and China have mostly been discounted by markets, but an intensification cannot be ruled out.

The Aussie dollar is very clearly overbought here and has been for quite some time. This doesn’t necessarily mean that a weaker NFP would lead to only moderate gains, but from a purely technical perspective the potential upside seems limited in the immediate future. The crucial resistance currently being tested by this symbol is the 50% monthly Fibonacci retracement area based on the main downtrend on MN which started in July 2014. While a breakthrough upward from here is possible today or next week, consolidation before a fresh attempt absent overbought seems more favourable now.

Non-farm payrolls is the world’s most important regular release of economic data. As usual, you can expect high volatility for most major instruments from 13.30 GMT this afternoon.

If you do choose to trade the NFP later today, it might be a good idea to diversify your positions and more generally to avoid overtrading. The confluence of uncertainties this month – divergent predictions plus of course sentiment on the presidential transition, fiscal and monetary policy, inflation and various others – makes this a particularly hard release to call, so don’t be afraid to sit it out. There’ll be another NFP next month!

Thank you for reading Exness Education’s NFP preview, and thanks especially once again to Mr Monzón and Mr Cabdi for asking for these symbols! Please join us again next week for more of the usual analysis.