NFP preview: back to King Dollar?

NFP preview: back to King Dollar?

The dollar has generally made gains this week against various currencies as American bond yields have risen sharply. Tomorrow’s non-farm payrolls (‘NFP’) is a key moment for the recovering greenback, with balance of trade from the USA also due at the same time, 13.30 GMT tomorrow. This NFP preview looks at gold-dollar (XAUUSD), cable (GBPUSD) and dollar-yen (USDJPY).

Many participants in forex markets are increasingly pricing in a stronger than expected economic recovery in the USA. Benchmark decade Treasury bonds in the USA have remained in focus, with the yield from these having touched 1.5% late last month and holding in that area. Higher inflation now seems very likely this year, above the 2% that used to be the Fed’s target, while the probability of significant tightening of monetary policy remains low.

Last month’s NFP came in at 49,000, almost exactly in line with the consensus. Generally speaking, the last year has understandably created challenges for those attempting to guesstimate job data, so the consensus for tomorrow of around 182,000 should probably not be considered as reliable as pre-2020 expectations might have been. Equally, sentiment on the dollar remains strong for now: based on the pound’s behaviour around recent claimant counts, traders should be prepared for a negative surprise not having the ‘usual’ effect on charts.

As ever, tomorrow’s releases are likely to bring volatility for most financial markets at least in the short term. For new traders, it might be wise to keep positions small if held tomorrow afternoon. Absolute beginners could benefit from practising with a demo account first before they attempt to trade the NFP for real. 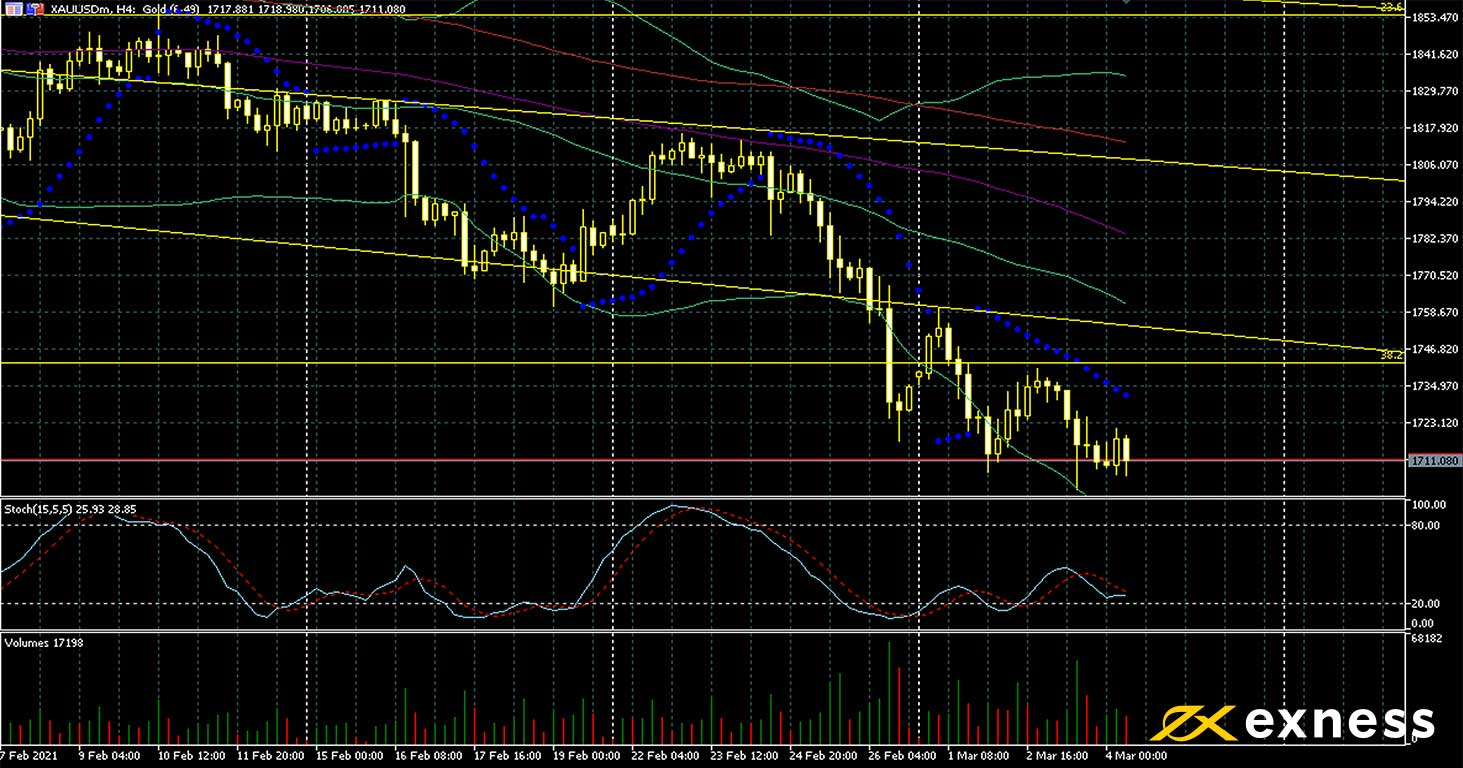 Gold has continued to move down over the last few weeks as bond yields have increased and the dollar generally recovered. Yesterday’s $1,701.643 was a nine-month low. Despite good general fundamentals like record easy monetary policy and clear signs of rising inflation, the overall ‘risk on’ mood has continued to make gold seem unfavourable for many investors so far in 2021.

From a technical point of view, $1,700 is a very clear psychological area of support. Below this, the next clear support is the 50% weekly Fibonacci retracement based on May 2019 to August 2020’s overall upward movement; this is below the bottom of the four-hour chart around $1,650.

To the upside the 38.2% weekly Fibo retracement is in view, as is the 38.2% area of the weekly Fibo fan, followed by the three moving averages. While it is obviously very risky to sell the bottoms, the fact that there is no longer an overbought signal here (the slow stochastic reads about 27 at the time of writing) means that there does seem to be scope for a breakout below $1,700 tomorrow afternoon even though entering higher would be preferable, traditionally speaking. As usual, short-term opportunities are likely in both directions around the key data. 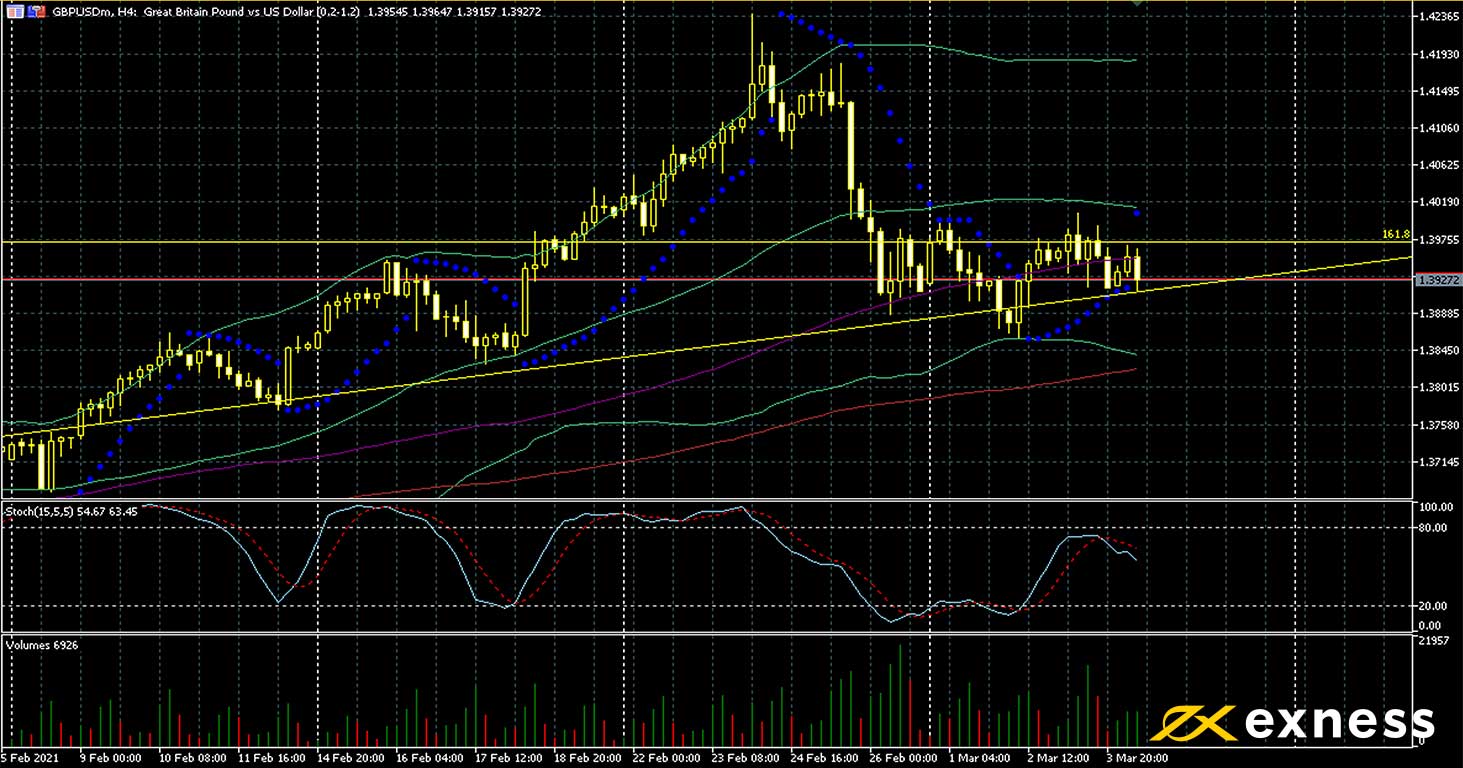 Like many other majors, the pound has lost strength against the dollar over the last few weeks for many of the same reasons as above. So far, there has been no clear reaction to the British government’s budget by markets: ongoing pledges of support to various key sectors of the economy by Chancellor Rishi Sunak haven’t decisively boosted sentiment.

This pair more than many other majors seems to be at a key crossroads. Price has tracked the 161.8% weekly Fibonacci extension area and the 38.2% zone of the weekly Fibo fan closely since the end of February, forming an ascending triangle on the chart. Tomorrow’s data could well deliver a breakout here in either direction, with downward being logical based on fundamentals, but this remains in question.

Price is very close to the 100 SMA and looking reluctant to push much below it – trading against the main trend on a timeframe like this is not normally a productive approach for the average trader. Tomorrow’s release might provide more clarity. 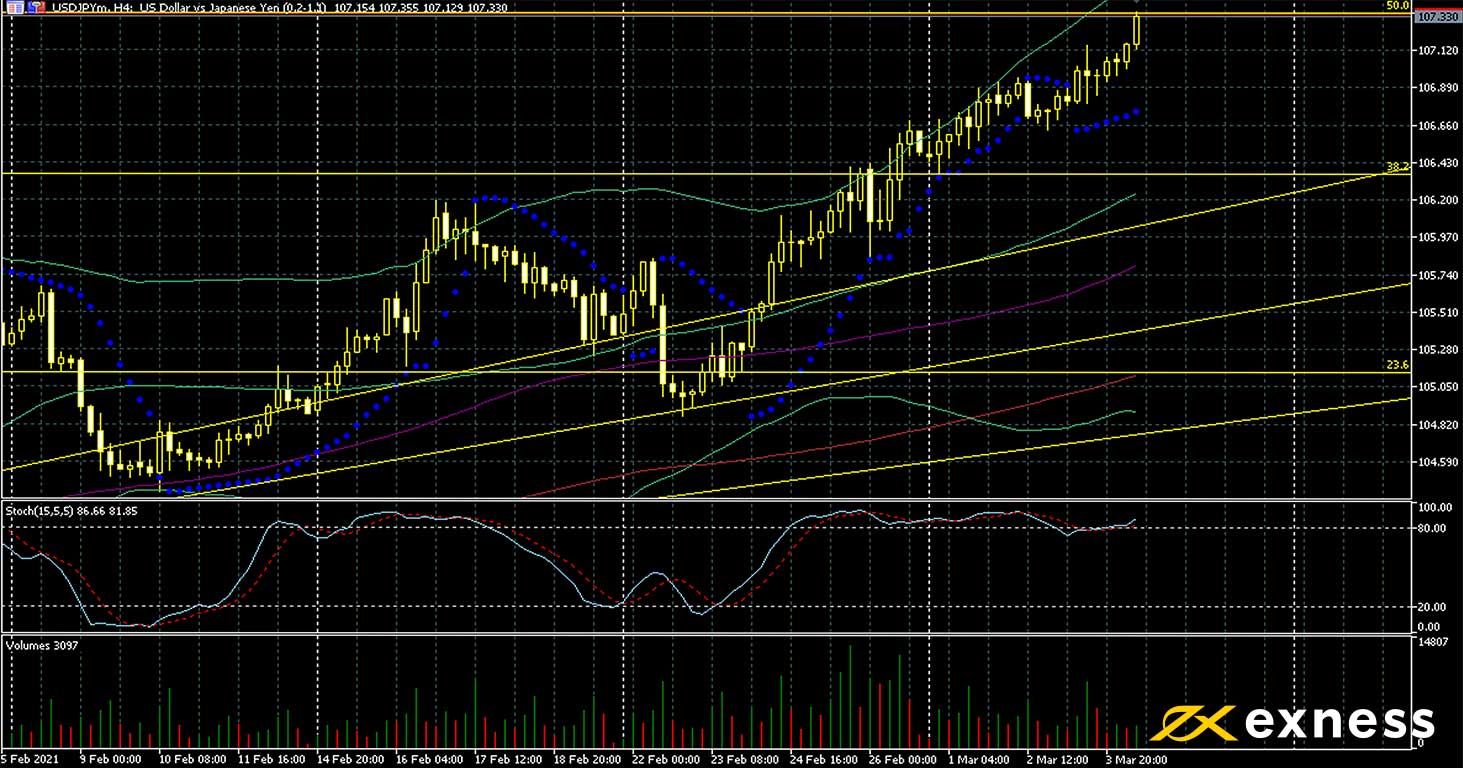 The yen reached fresh eight-month lows against this dollar this morning around ¥107.35 amid the dollar’s general strength and many participants’ reluctance to buy havens. Yields from Japanese bonds remain negligible compared with American and some European counterparts; 10-year Japanese bonds are currently at about 0.14%. However, Japanese consumer confidence reached a 12-month high in February as the economy starts to recover.

USDJPY’s long downtrend based on the 61.8% zone of the weekly Fibonacci fan was broken decisively in late January. This line is no longer visible on the chart. However, price is now testing the crucial 50% weekly Fibo retracement – this is normally a key area for sellers to return in force. With an overbought signal at around 85 from the slow stochastic, one might traditionally expect that dollar-yen needs to consolidate over the next several periods before another possible leg up.

Thank you for reading Exness Education’s NFP preview! Please join us again next week for more analysis. We wish you a good NFP and, more importantly, responsible trading.