Oil up ahead of OPEC+’s meeting

Oil up ahead of OPEC+’s meeting

The most important event for financial markets today is the scheduled conference call among the energy ministers of OPEC+ this afternoon. The general expectation is that the group will agree to cut production of crude oil, but questions remain as to how much will be cut and whether such a cut might have a significant effect on the price.

Important data from the USA today include weekly jobless claims at 13.30 GMT. More negative figures are expected as the coronavirus crisis continues. Meanwhile Roman Catholics celebrate Easter this weekend, so traders should be prepared for lower liquidity and possible volatility for symbols which are not closed tomorrow and on Monday. 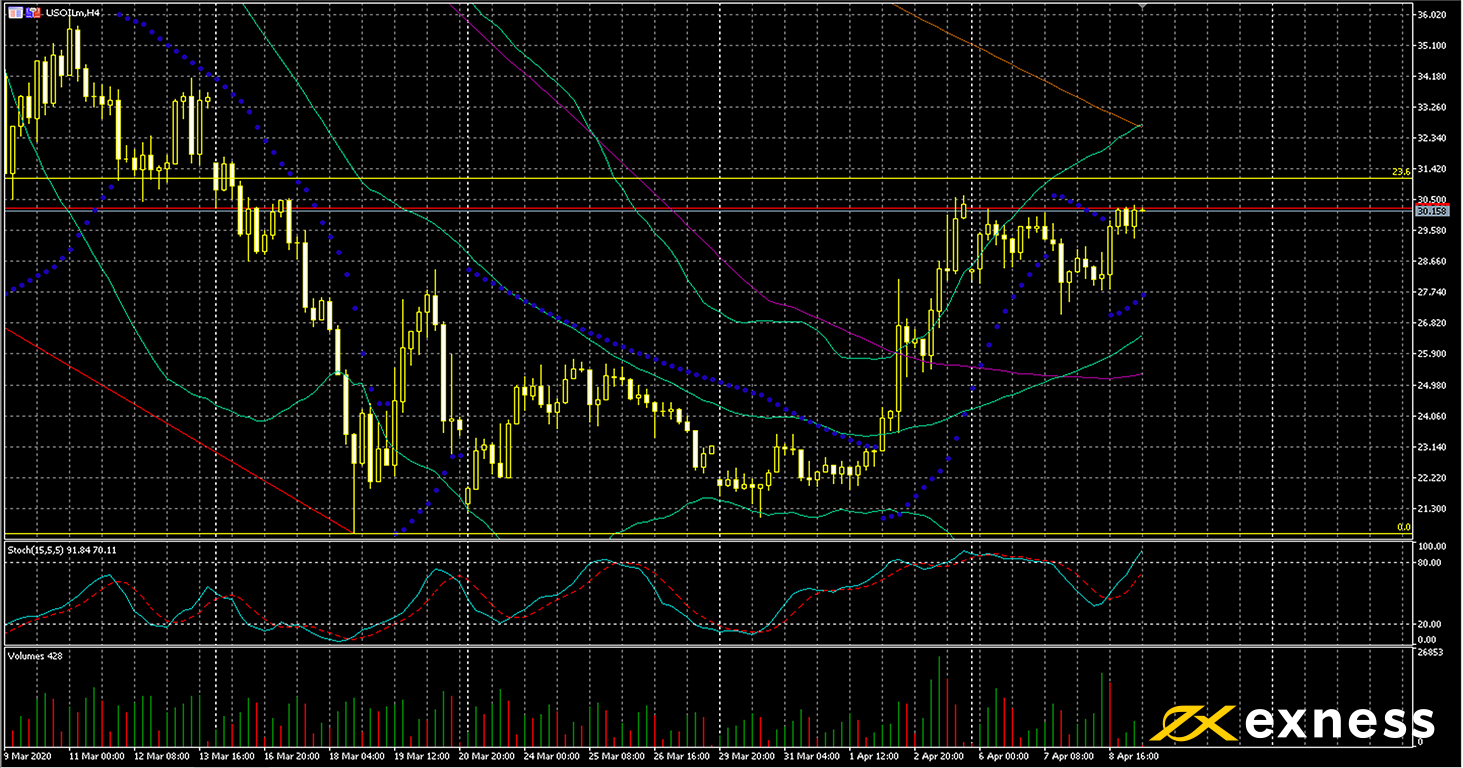 Both Saudi Arabia and Russia seem to be tiring of the ongoing price war, with each country taking a big hit to the value of their exports. Russia’s economy is somewhat less reliant on energy than that of the Kingdom, but fewer reserves of currency mean that the former is likely to struggle to tackle the coronavirus even more with oil prices so low. The big question mark is over how OPEC+ can agree to slash production heavily enough to offset the dramatic decline in demand expected this year.

The main hurdle for the bulls today is likely to be the 23.6% Fibonacci retracement area, which is based on the daily charts. This zone is somewhat above the crucial psychological area of $30. If the news later is astoundingly positive, the 200 SMA might function as the next resistance.

Signals are in general somewhat positive, with the 50 SMA from Bands having completed a golden cross of the 100 moving average. However, a case of ‘buy the rumour, sell the fact’ seems fairly likely, especially if the agreement turns out to be less than double digits of millions.

The loonie’s correlation with crude oil has continued to be very strong so far in 2020, with CAD following oil’s sharp losses in most of its pairs especially since the end of February. The ongoing impact of covid-19 on Canada’s economy is an additional question. The franc, one of the three traditional havens, has lost strength to a degree recently as indices and shares have generally recovered somewhat from recent lows.

TA gives us a pretty similar picture to the chart of crude oil although volatility here is somewhat higher considering that this is a major forex pair. Fibonacci is also important for CAD–CHF now: price has been testing the 38.2% retracement area for the last couple of days. There’s even an overbought signal from the slow stochastic.

As above, losses seem to be likely here unless OPEC+ shocks the world with a huge cut to production. The long weekend for western Easter is unlikely to be an ideal time to trade this symbol, though. 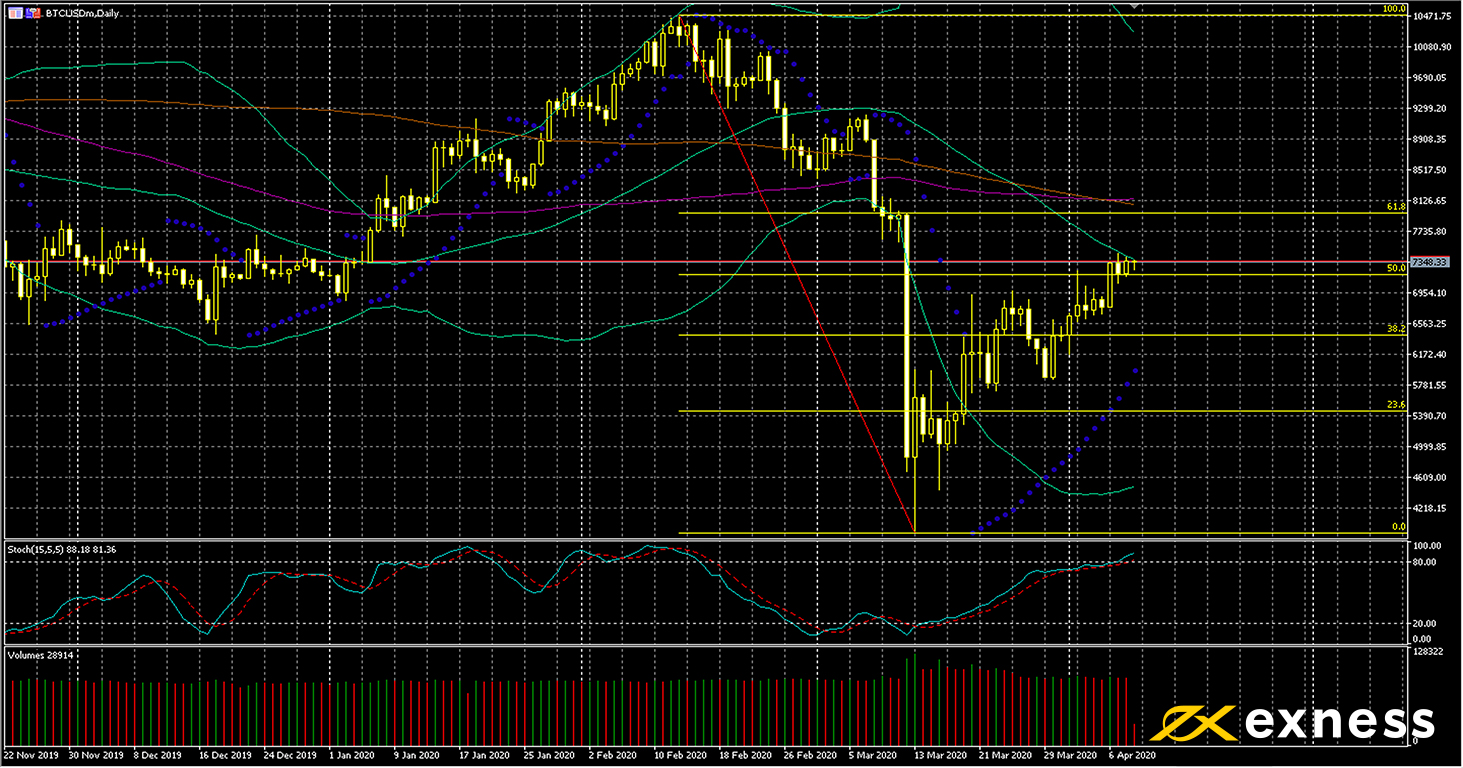 Like most pairs with bitcoin, BTC-USD has shown considerable strength and momentum in bouncing from 12 March’s lows. Traders should be very cautious before trusting any possible inverse correlation between bitcoin and oil. While there is some similarity in the charts of bitcoin and gold recently, by no means could any cryptocurrency be considered a ‘haven’ in the traditional sense of the term.

The recent test of the 50% Fibonacci retracement area appears to have been successful, and there could be a consolidation around the current area before an attempt to move up towards $8,000. On the other hand, the slow stochastic prints an overbought signal and selling volume remains fairly high.

Given that price is now testing the 50 SMA from Bands, many traders will want to study behaviour over the next couple of days before buying in. For short-term sellers, though, entry might be suitable if there’s a short retracement downward today.

Exness Education wishes our western Christian readers a happy and holy Easter. We hope you have a restful weekend. Please join us again next week for more analysis of the most popular symbols!