Bitcoin has been flatter this week against the won, with no more lower closes since Monday. Click on the image above to magnify. There appears to be a degree of buying demand after last week’s losses.

The most important high resistance here is likely to be the area of ₩12.2 million, the high from the second half of February. Low support is less clear, but ₩9.7 million could be an important area. This was the lower limit of January’s retracement.

Moving averages in the usual combination of 50, 100 and 200 continue to print a sell signal. All three are successively below each other. The 50 and 100 SMAs also death crossed the 200 late last week and early on Monday GMT. On the other hand, price has broken above the 50 SMA from Bands in the current period. The area of focus from Bands in the near future is the 100 SMA around ₩11.12 million.

There is no indication from either Bollinger Bands (50, 0, 2) or RSI of saturation. Narrowing Bands though suggest decreasing volatility and activity. How price behaves if it reaches the upper deviation of Bands could be key. MACD gives a fairly weak buy signal, with the histogram extending somewhat above the signal line in the current period, though still not moving into positive territory. ADX suggests a fairly strong upward trend at 24; the +DI is around 16 points higher than the -DI.

The current period’s vigorous punch above the 50 SMA from Bands seems to suggest buying demand had strengthened. Previous attempts on the 38.2% area of the Fibonacci fan were met with fairly large down candles shortly afterward. There’s no clear signal from price action now, but the shapes around upcoming key areas could be crucial for longer term direction.

The 50% zone from the Fibonacci fan is a key area because of its confluence with the 50 SMA from Bands, so the strength of this period’s upward movement might signal more gains. The next target for short-term traders is likely to be the overlap of the upper deviation of Bands with the 61.8% Fibo from the fan.

The combined order book gives somewhat mixed signals at the time of writing. For bitcoin-won specifically, volume of asks is about 40 BTC higher than bids. The sum needed to move price by 1% upward is also much higher in total than for downward movement on both exchanges from which data are drawn. However, considering BTC-USD might yield a more reliable signal due to the greater volume of data. 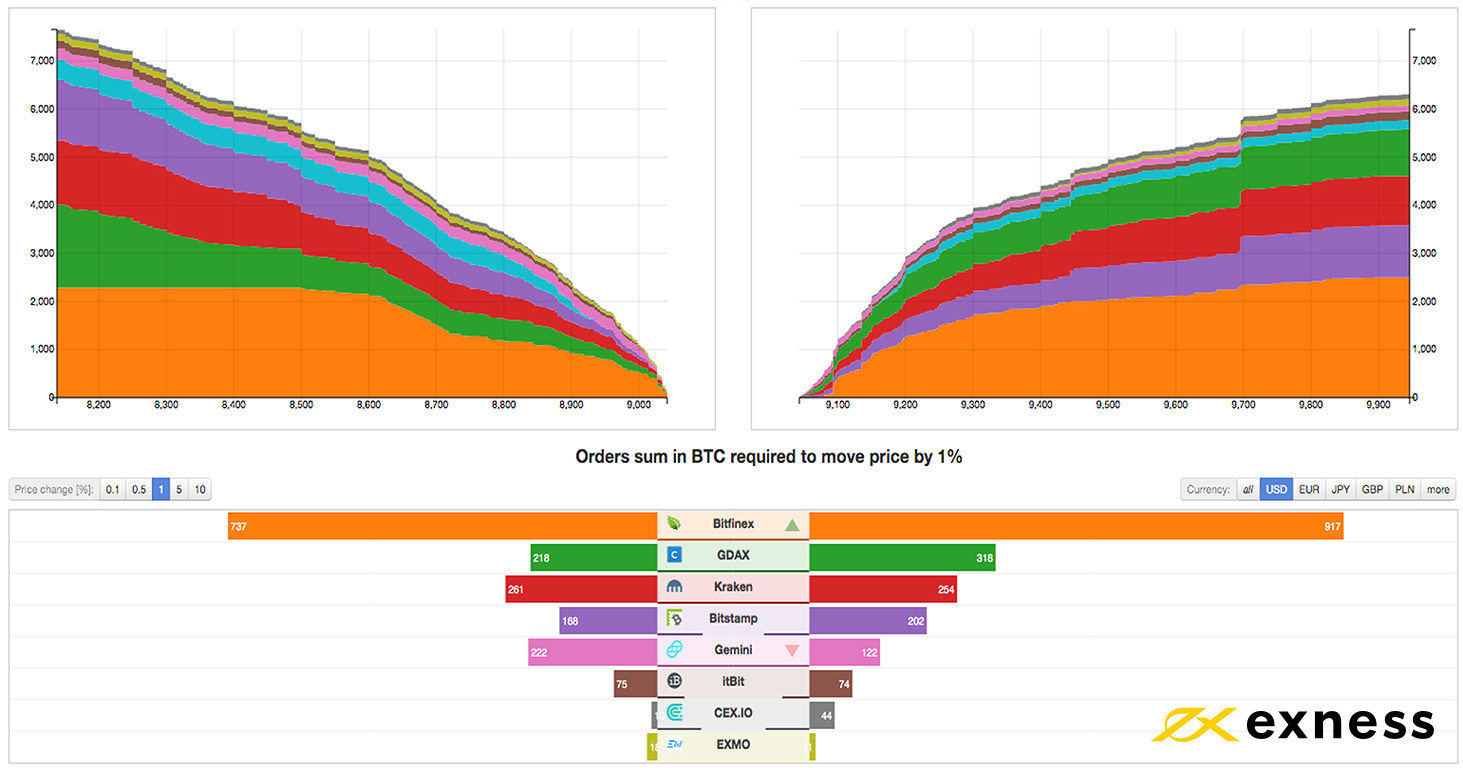 Although not quite contrary to BTC-KRW, here bids outnumber asks by about 1,000 BTC. Click on the image to magnify. For Bitfinex only though the sum is nearly identical. The total orders needed for movement is basically similar to BTC-KRW, with somewhat more buys needed for 1% up than sells for down.

March’s futures have made strong gains so far today GMT. BTCF for this month has moved up over 2% since 3.00 GMT to reach nearly 9,000. On the other hand, volume at 164 is not particularly high. 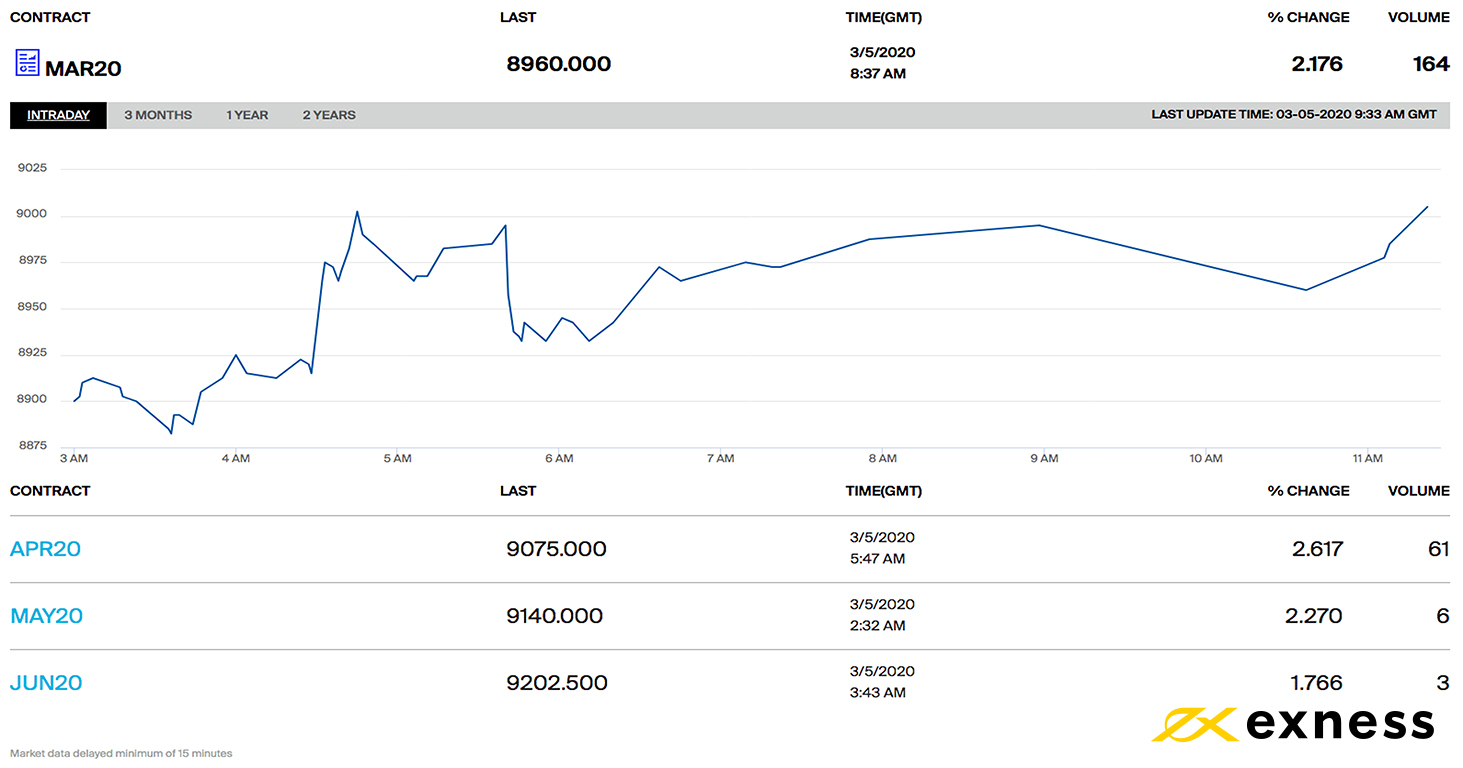 April’s contract did better, with gains of about 2.6% and comparatively higher volume at 61. Click on the image to magnify. The contracts for subsequent months still aren’t extensively traded. Futures overall would suggest some ongoing gains for spot CFDs on bitcoin.

The general picture from TA and other sources is one of upward movement being likely for bitcoin-won over the next few periods. The crucial factor for ongoing direction is likely to be what happens when (or if) price moves into overbought based on both Bands and RSI.