Bitcoin is one of the widely followed instruments showing strength so far in April. Click on the image to magnify. Against most currencies including the won, it has bounced significantly from the crash on 12 March.

The most important resistance on this timeframe is the 61.8% Fibonacci retracement area around ₩9.37 million. Low support is the area of recent lows around ₩5.3 million; however, there are likely to be a number of important supports before any retest of this fairly distant zone.

Moving averages give a moderate buy signal at the time of writing. Price has broken above all three of the 50, 100 and 200 SMAs as of the end of last week, although these MAs are currently bunched quite close together. The 50 SMA from Bands is about to complete a golden cross of the 200 SMA, and it appears that the 100 SMA will do the same within the next few periods.

ADX prints an extremely strong buy signal at 47.5. The +DI is nearly quadruple the -DI. MACD also yields a buy signal with the histogram extending somewhat above the signal line and both in positive since the second half of last week.

According to the RSI which reads 75, BTC-KRW is currently overbought. Bollinger Bands do not currently give an overbought signal but price remains very close to the upper deviation.

Recent price action seems to confirm the overall buy signal from technical indicators. There’s been a number of up periods so far this week, and the 50% Fibonacci retracement didn’t provide much resistance last night GMT. However, the last period was a doji; this combined with possible saturation could signal a pause and consolidation over the coming periods.

The Fibonacci retracement areas here have been drawn based on the overall downward movement in late February and the first half of March on the daily chart. The next key barrier to the upside is the 61.8%, visible at the top of the chart.

Supports from Fibo are likely to be 50% and 38.2% based on recent behaviour around these areas. Many buyers will wait for a retracement to one of these areas before buying in, attempting to reduce risk and avoid buying when price is relatively high. 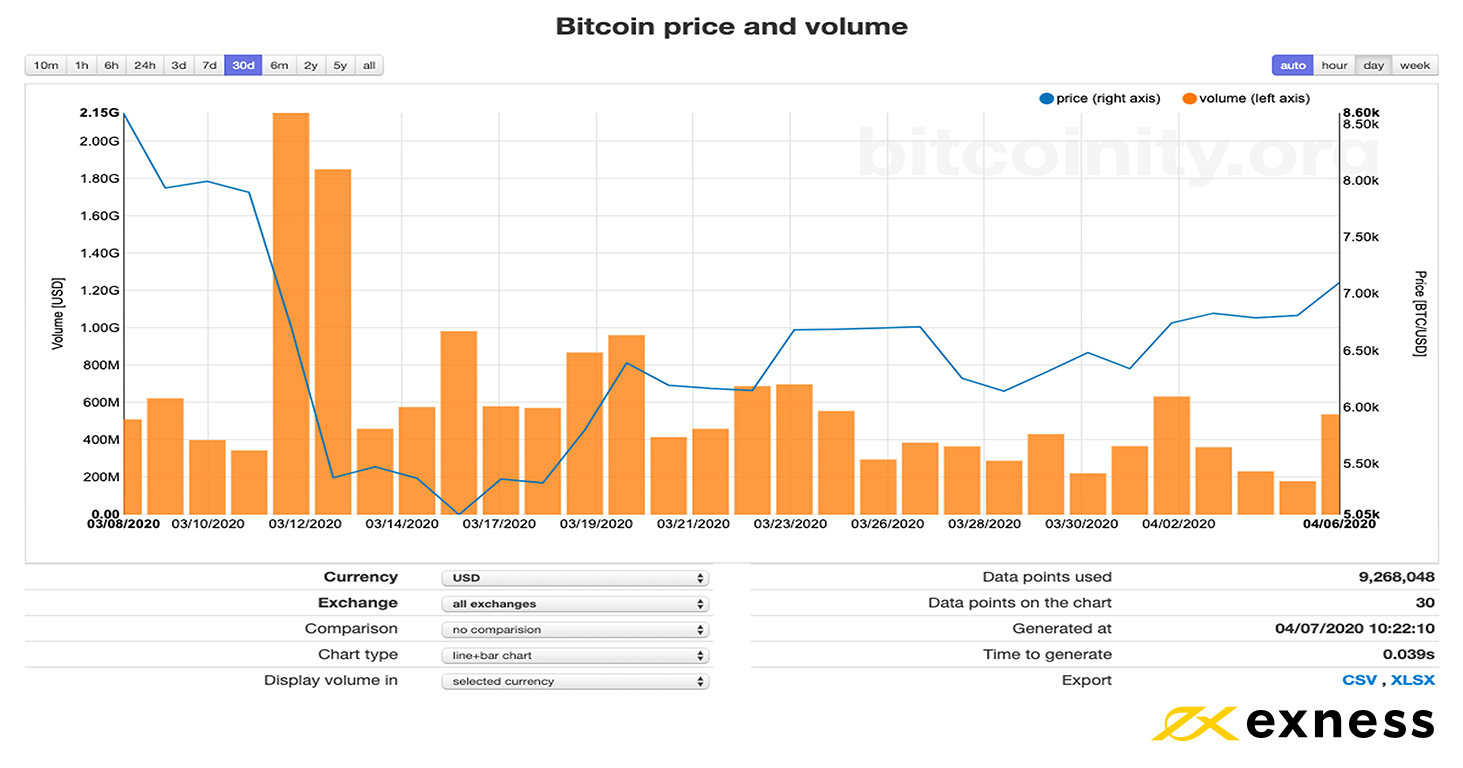 This 30-day chart of price against volume for BTC-USD suggests that there is reasonable buying demand supporting bitcoin’s current gains. Click on the image to magnify. It’s possible to discount the very high volume around 12 March’s crash because one might surmise that much of this was short-term opportunism as the price moved suddenly and sharply downward. This sort of spike in volume is typically not indicative of a sustainable trend.

Volume of around a billion dollars as the bounce really made progress on the 19th and 20th of March seems to be a promising sign for continuation upward. A fairly small increase in volume has coincided with each day of gains since then. 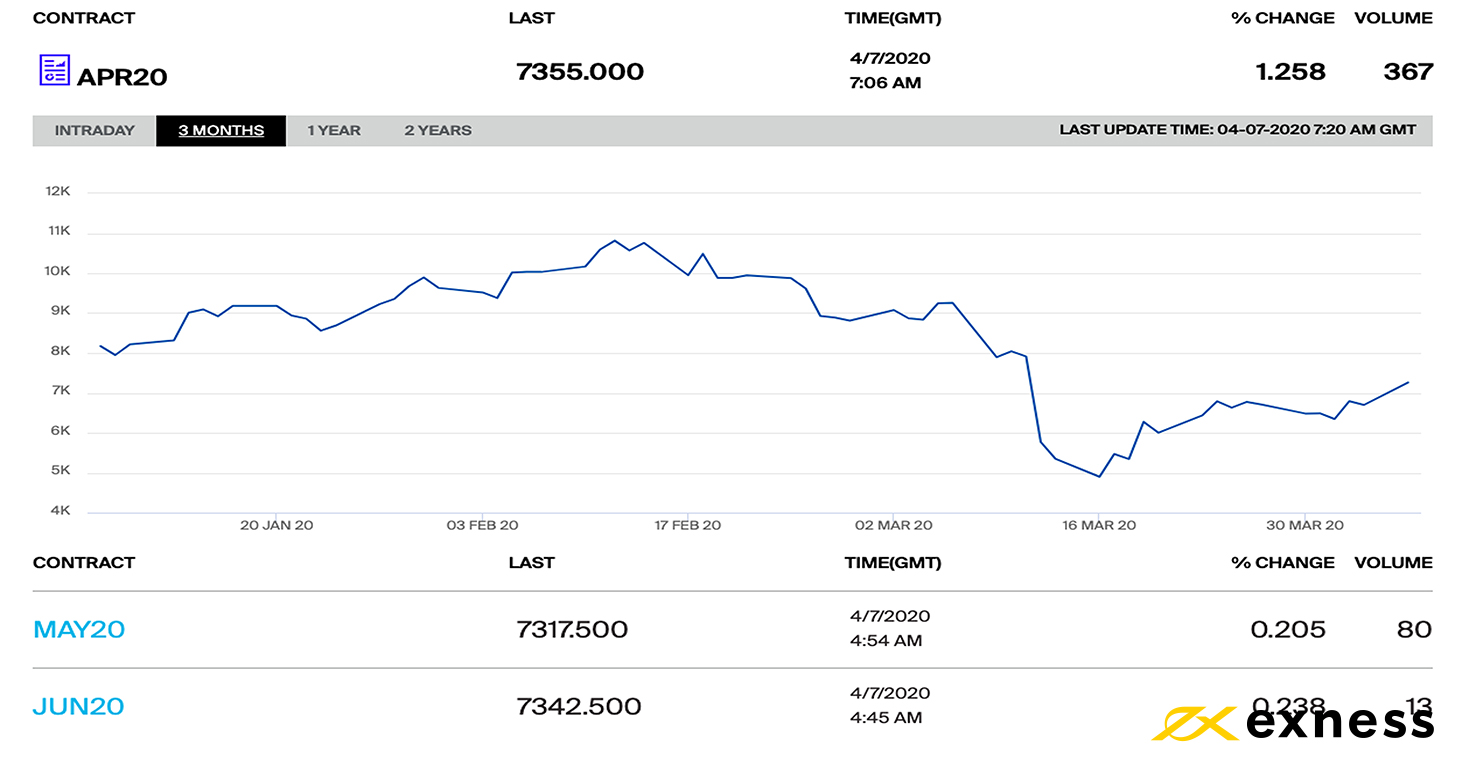 Volume for April’s contract has increased sharply since last week and come with gains in price, basically matching what’s been seen on the charts of CFDs on spot bitcoin against fiat currencies. Click on the image to magnify. Intraday change for April’s futures is currently around 1.3%.

May’s contract has also shown higher volume so far this week. On the other hand, both this and JUN20 are still less than 100 together, so any buy signal should probably be considered more reliable from the current month’s BTCF.

TA overall suggests that more gains are likely for bitcoin in the rest of the week. The speed and extent of these could be determined by potential conditions of saturation; most new buyers will be watching the upper deviation of Bollinger Bands, RSI, stochastics and similar. Buying during a downward consolidation would improve the potential to lower risk and enhance reward.