Bitcoin has continued to gain strength this week against most fiat currencies including the won. Click on the image to magnify. On the other hand, momentum has decreased to some extent since the start of May. The critical fundamental event approaching is bitcoin’s halving, which is expected in slightly less than five days.

The most important high resistance here is February’s high in the area of ₩12.4 million, slightly above the top of this chart. Low support is probably the psychological area of ₩10 million, although there will likely be several important supports before this zone could be tested in the event of a retracement downward.

Moving averages continue to print a strong buy signal with the 50, 100 and 200 SMAs successively above each other. The 50 SMA from Bands has extended strongly above the slower two since the end of April and is likely to provide the first local support below ₩11 million in the near future. The 100 and 200 SMAs will also probably function as important supports if a deep retracement occurs around the halving next week.

Technical indicators also yield a clear buy signal at the time of writing. ADX (14) at 46 suggests a very strong upward trend, with the +DI more than double the -DI. MACD (12, 26, 9) also gives a buy signal, being in positive territory and with the histogram having moved back above the signal line over the last few periods. RSI (14) is positive at 63 although close to overbought. Shrinking deviations from Bollinger Bands (50, 0, 2) suggest lower volatility in the near future, which is consistent with the approach of a key event like next week’s halving.

The clearest impression from recent price action is lower momentum towards the current high compared with last week’s breakout. There wasn’t any follow-up to speak of after the large upward body last night GMT. This situation would usually be interpreted as signalling a retracement or consolidation, particularly within the context of the halving approaching.

The Fibonacci fan here has been drawn based on the upward movement from March’s lows on the daily charts. With only the 38.2% and 50% zones visible on the four-hour chart, the impression that bitcoin might have moved upward too quickly seems to be reinforced. Some traders looking at the relatively longer term might want to buy in from the area of 38.2% during a retracement; this area is likely to be strong given the confluence with the 200 SMA. 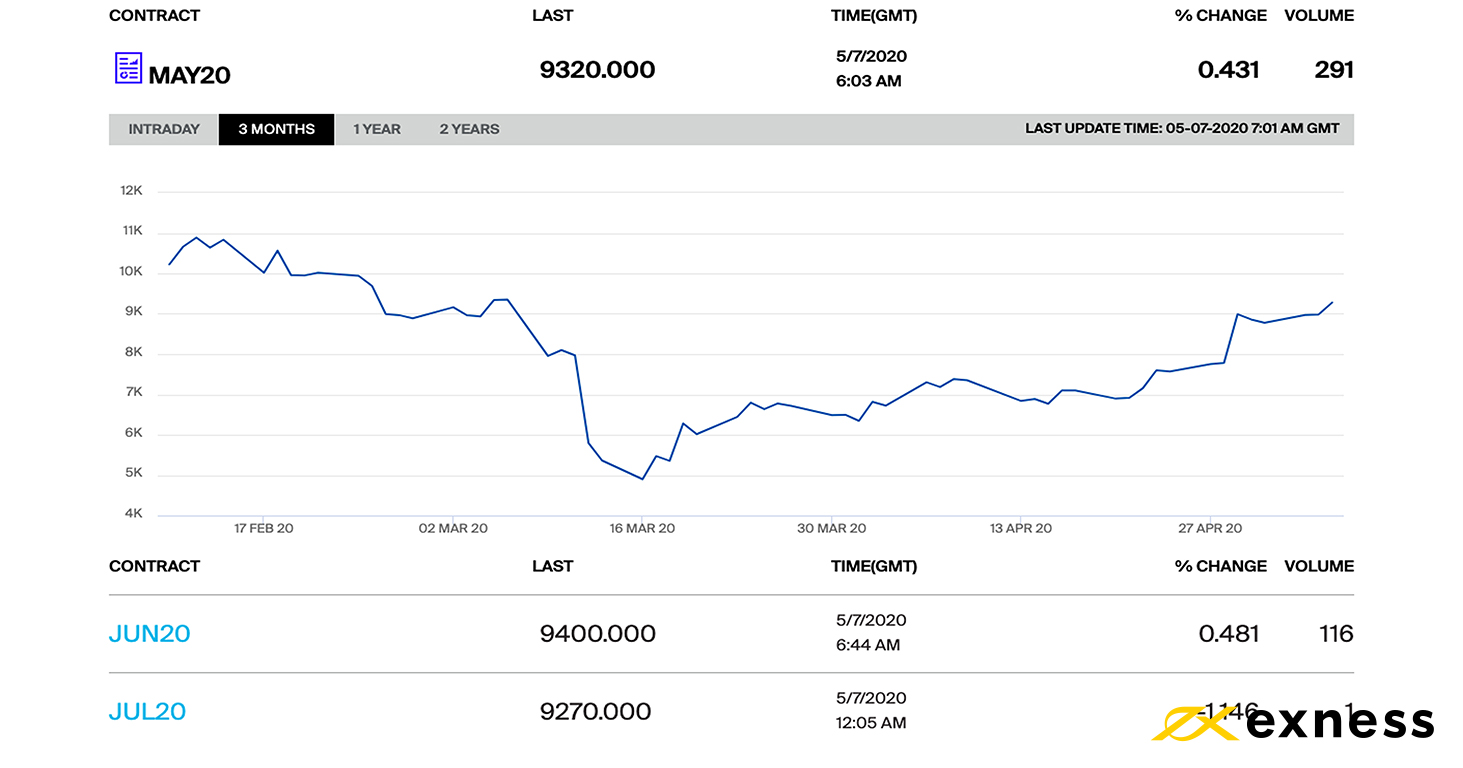 Futures on bitcoin support the general impression that a consolidation is likely in the runup to the halving. We can observe a very shallow contango (relatively speaking) between May and June’s contracts and fairly high volume for both at 291 and 116 respectively. Any signal from July’s BTCF should be ignored for now given that volume of 1 is still extremely low. 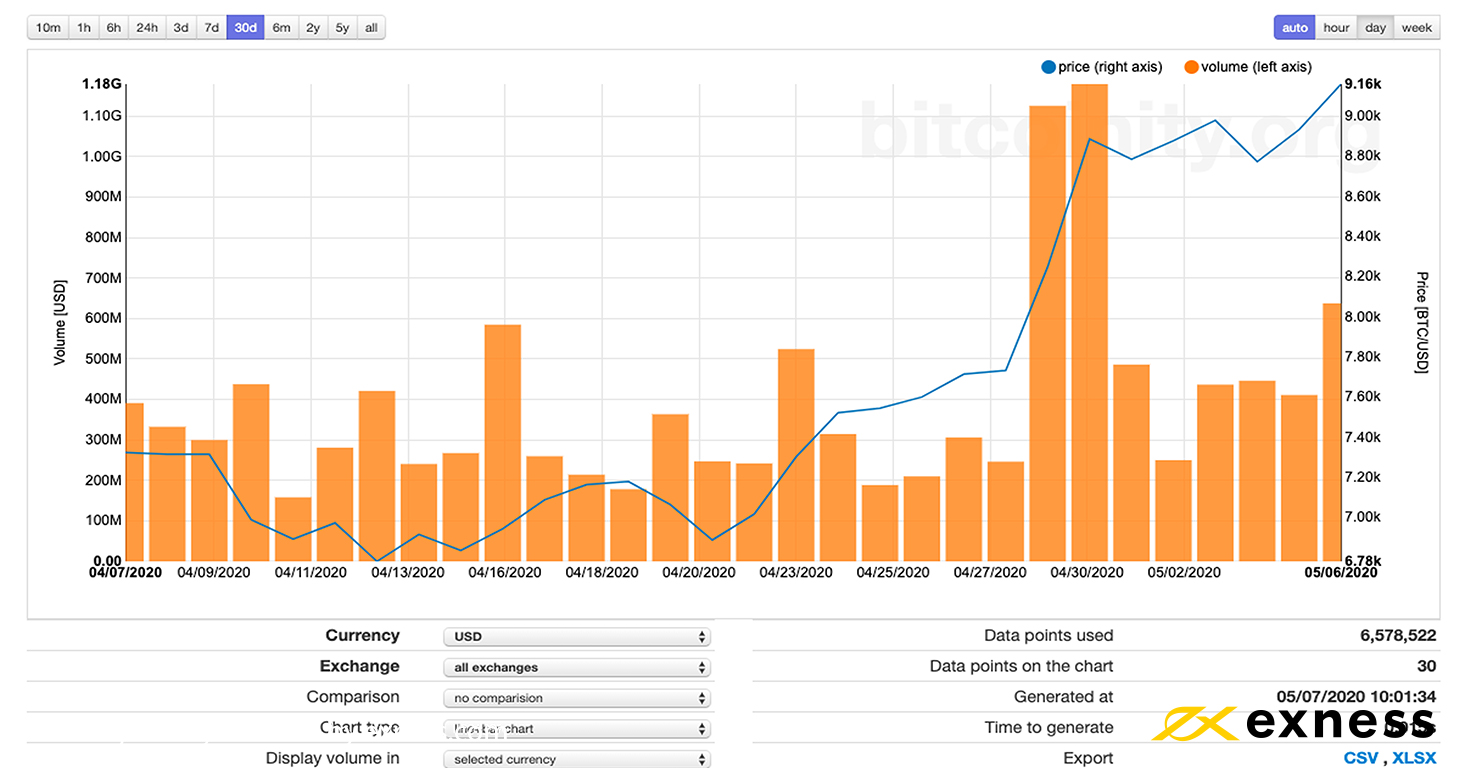 A conventional interpretation of thirty-day volumes would certainly suggest that ongoing gains are likely for bitcoin after the halving. This chart considers BTC-USD for which more data are available.

The relatively very high volume above $1 billion around the latest breakout upward can be observed in the two large orange bars. Short-term buyers are not very likely to enter around the current area, so it’s reasonable to conjecture that this sort of movement supported by high volume is sustainable sooner or later. Nevertheless, buying in lower can help to reduce risk and potentially increase reward.

The overall impression from TA plus futures and volume is that bitcoin-won will continue its upward movement sooner or later. The immediate effects of the halving next week are likely to bring considerable volatility and short-term opportunities to the downside.

Thank you for reading Exness Education’s technical analysis of BTC-KRW! Please join us again next week for more analysis of the most active symbols, and don’t forget that you can request a symbol to be covered here by commenting on social media.