Bitcoin has corrected somewhat so far this week from its recent highs on the four-hour chart. Click on the image above to magnify. What appeared to be initial testing of $10,000 was rejected in overbought in the second half of last week: price has now moved out of saturation and closer to its moving averages. Today’s technical analysis of BTC-USD considers the possibility of more upward movement over the next few days.

The most important high resistance here then is the crucial psychological area of $10,000, slightly above the top of this chart. Low support is somewhat less clear but in the near future the 50% Fibonacci retracement area around $7,000 could be an important zone. As yet, there is no clear indication of a direction to be taken in the immediate aftermath of bitcoin’s halving.

Moving averages continue to yield a buy signal, with each of the 50, 100 and 200 SMAs successively above slower ones. The 100 SMA seems to be a support which price is currently testing. It’s possible that the 50 SMA from Bands might function as a resistance in the medium term. Meanwhile the presence of price within the larger value area between the 50 and 200 SMAs might lead to consolidation over the next few days, not least because the immediate reaction to the halving was fairly muted.

There is no clear signal from ADX (14) at the time of writing, with the -DI very slightly above the +DI. MACD (12, 26, 9) is also neutral: the signal line and histogram are overlapping. RSI at 40 is also closer to neutral than oversold.

Recent price action around the 100 SMA seems to confirm the current area’s importance as a support. The long tail of Sunday night GMT’s first period suggests strong demand in areas below about $8,400. The second attempt to move down last night GMT was also rejected with a large tail.

Fibonacci retracement areas are drawn here based on the daily charts. The clearest area of importance is the 23.6% retracement which coincides with the 100 SMA and the current area. Each attempt to break below this so far this week has been rejected. In the event of a deeper retracement, both new buyers in the medium to long term and short-term sellers would probably look to the 38.2% and 50% zones as supports. 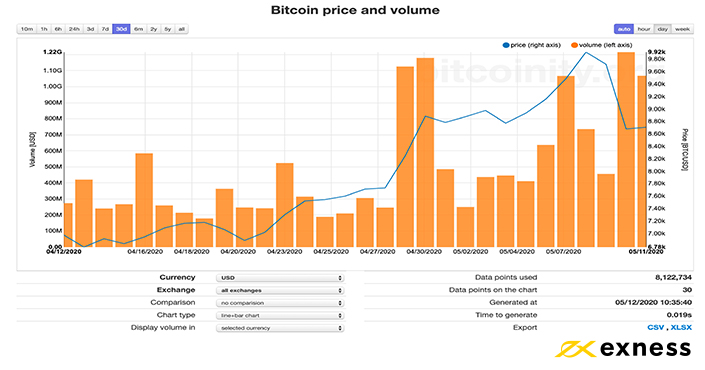 Volume for BTC-USD has been very high since the end of April, with the daily figure moving above $1.1 billion five times on this chart. Click on the image to magnify. The conventional inference here is that many traders buy on both strength and retracements in the belief that $10,000 will be tested sooner or later.

However, the possibility that the latest surge in volume might be short-term selling from recent highs should not be dismissed. A clear break below the 23.6% Fibonacci zone on the chart above combined with another spike in volume could signal a deep or at least deeper retracement to the downside. 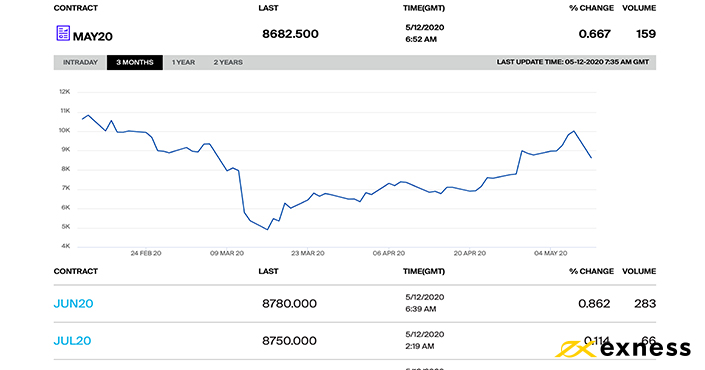 BTCF in general reflects developments for spot CFDs on bitcoin. Click on the image to magnify. Combined volume for futures (and for that matter most options) on bitcoin is currently at or close to record highs. In this case, we can see that volume has shifted more towards next month’s contract. This doesn’t necessarily suggest traders’ focus on the longer term in itself but is it is one factor in favour.

The contango here is inconsistent. July’s contract is cheaper than June’s but more expensive than the current month. This might reflect a degree of indecision or a ‘pause for breath’ after the halving. Traders can probably ignore any signal from August’s contract because volume of five is still very low.

The overall picture from the chart of bitcoin-dollar plus volume and futures is consolidation in the immediate future. After this, a continuation upward seems to be favourable. The counterpoint to this is that the market doesn’t appear to have decided yet on a clear reaction to the halving. While this might not appear anytime soon, traders should nonetheless be prepared for a deeper retracement.

Thank you for reading Exness Education’s technical analysis of BTC-KRW! We’ll continue to evaluate movements of the most popular pairs with bitcoin in the aftermath of the halving, so stay tuned. You can also request a symbol to be covered here by commenting on social media.