Bitcoin appears to have broken clearly through the crucial psychological resistance around $10,000 this week. Unprecedented inflows of liquidity in many countries now seem to be going into cryptocurrencies and gold in addition to stock markets as in the second quarter of 2020. The rate this morning GMT of $11,003 is the highest since this time last year. Today’s technical analysis of BTCKRW and BTCJPY compares charts of these spot CFDs with the situation of futures on bitcoin (BTCF) and deliverable volume on exchanges. 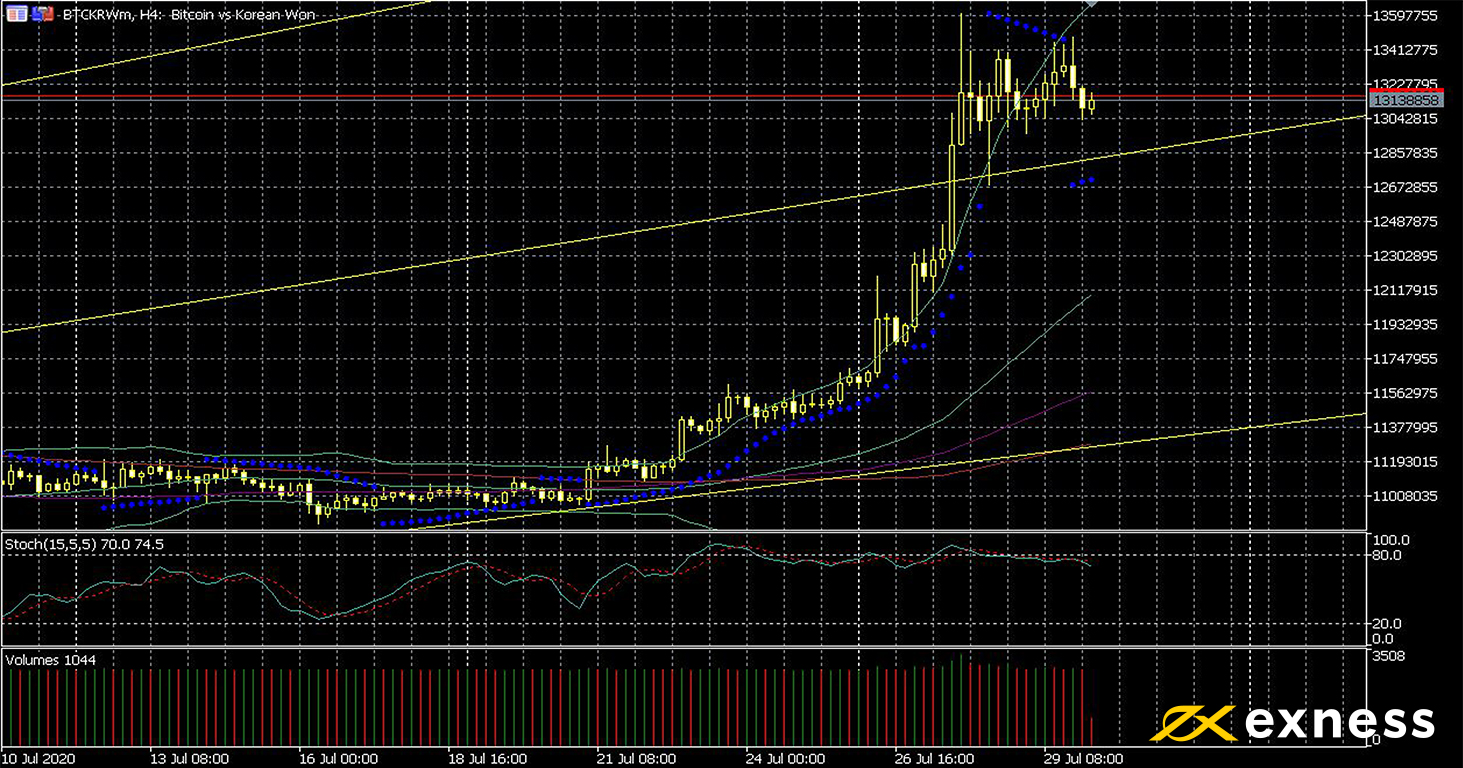 Like BTCUSD, BTCKRW has surged up this week and broken cleanly through ₩12 million, the longstanding area of psychological resistance. Moving averages give a clear buy signal, with each of the 50, 100 and 200 SMAs successively above each other and below price. The moving averages have also extended significantly away from each other over the last few periods.

Bitcoin-won is no longer overbought here based on either Bollinger Bands (50, 0, 2) or the slow stochastic (15, 5, 5). Some new buyers might focus on the 50% zone from the daily Fibonacci fan which is currently not far below the price. Others who focus more on the long term and who might be less aggressive could wait for a larger retracement, possibly to the area of the 50 SMA from Bands. 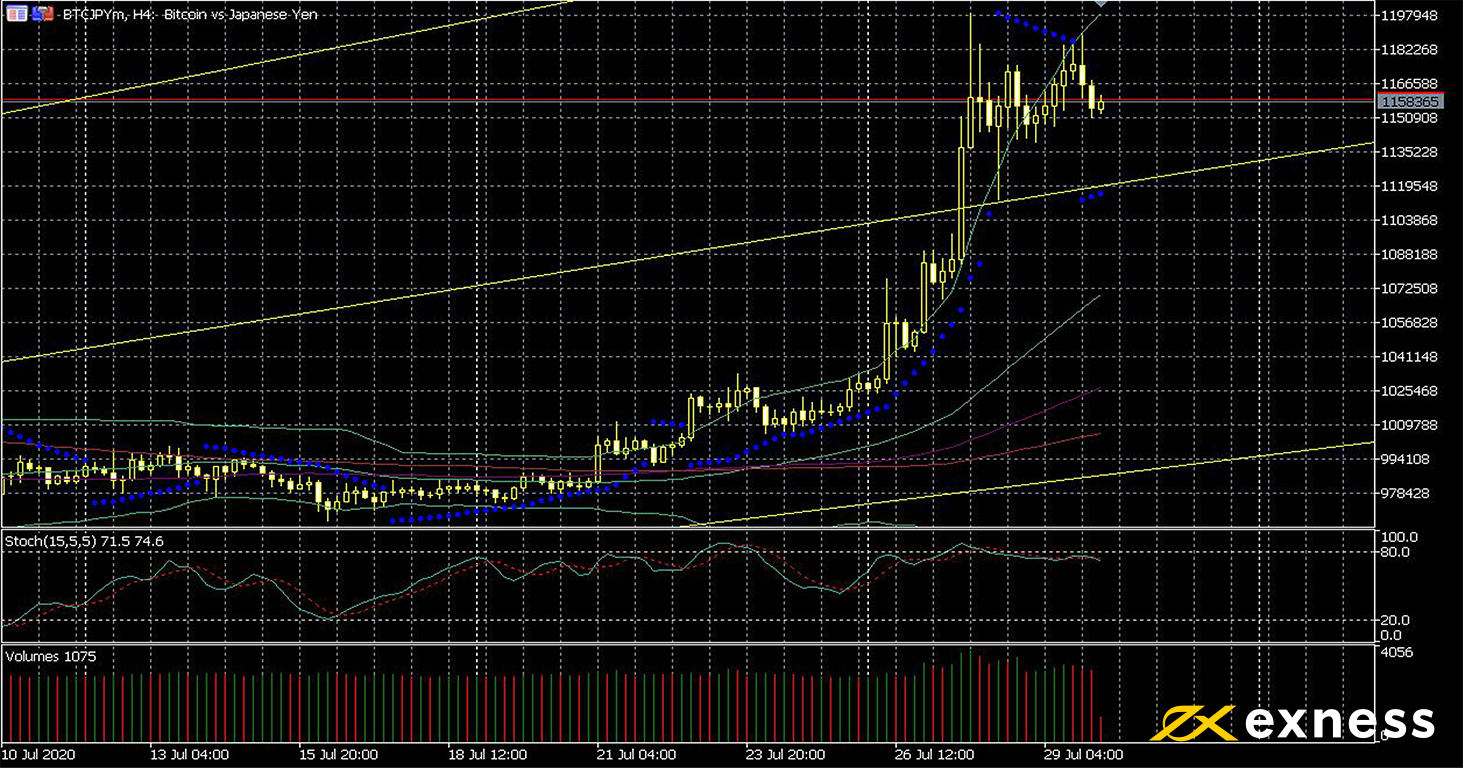 BTCJPY basically looks similar to BTCKRW and BTCUSD. Again the latest psychological area of about ¥1.1 million has been broken clearly. There isn’t any indication at the moment that the counter currencies’ fundamentals or movements elsewhere are having much effect on pairs with bitcoin. As above, we can see a clear buy signal from moving averages and price has moved out of overbought.

Also as above, volume has remained fairly constant over the last few weeks. Considering deliverable volume of bitcoin against the US dollar is more likely to yield a reliable signal, though, given that CFDs on BTCKRW and BTCJPY are a small part of the total volume on bitcoin. 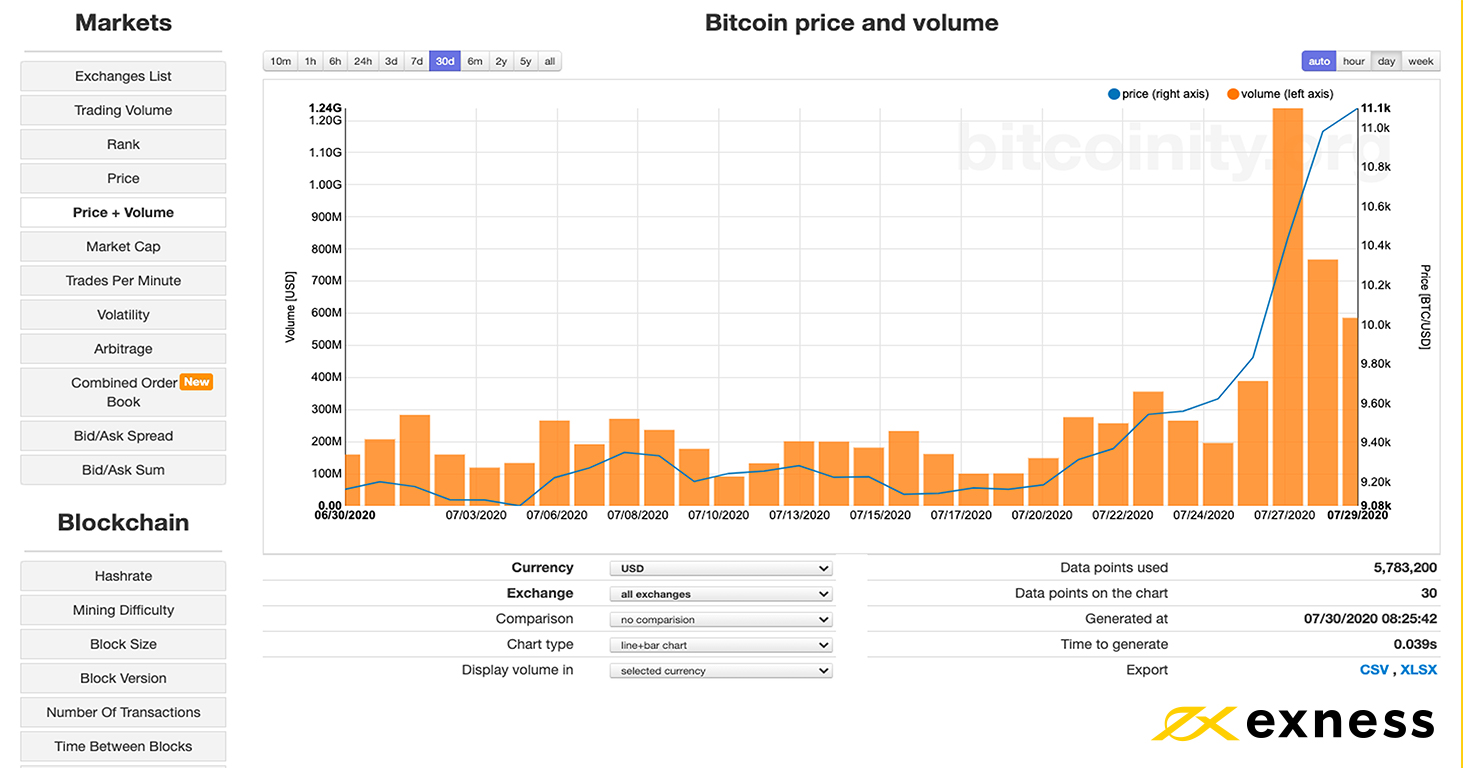 About $1.2 billion in volume on Tuesday looks like a lot from this chart, but relative to the crash in March and the initial recovery the following month it’s actually quite low. Volume was minimal during the latest consolidation and has now recovered somewhat closer to the daily average for Q2 2020.

Nevertheless, a sharp upward movement with a relatively big spike in volume is a positive sign for the price next month. Extensive buying into strength can indicate ongoing gains. Many traders though will be keeping an eye on this chart to see how deliverable volume behaves in the event of a downward retracement tomorrow or next week. 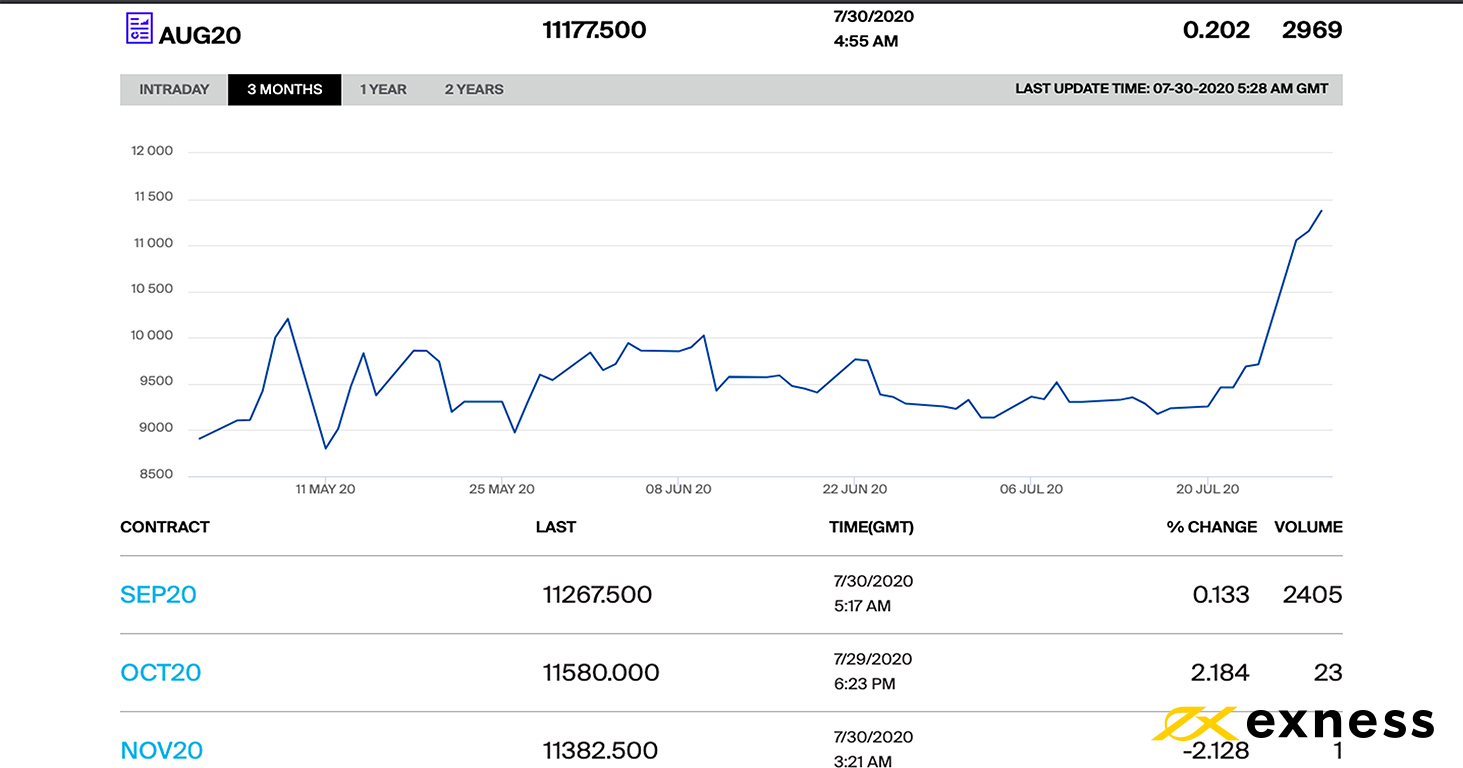 Three-month BAKKT™ bitcoin futures reflect the technical picture for spot CFDs on bitcoin fairly closely. Gains so far this week for August and September’s contract have come with record high two-month volume of over 5,300 contracts. This seems to support the impression from the spot charts that more gains could be on their way next month. Losses by November’s contract today can be ignored for now given the very low volume of only one.

TA in general suggests that more gains are likely for bitcoin sooner or later. With the latest psychological area of $10,000 broken and each pair with bitcoin behaving similarly, it’s unclear for now what sort of extent traders might expect.

Equally, the traditional behaviour in this situation would be to wait for a retracement before buying in, attempting to reduce risk and increase reward. If participants behave in this way, it might be several weeks before the main trend tests new highs. Short-term opportunities in both directions are likely until then.

Thank you for reading Exness Education’s technical analysis of BTCKRW and BTCJPY! Please join us again on Monday for our weekly preview of data. Don’t forget that you can ask us to write about a symbol here by leaving a comment on Facebook.