Bitcoin has rebounded against the dollar so far today having touched a fortnight’s low late last night GMT. Click on the image to magnify. The 50% zone from the daily Fibonacci fan is active as a support, but price is now within the narrow value area between the 100 and 200-period simple moving averages. Today’s technical analysis of BTCUSD looks at deliverable volume and futures compared with spot CFDs.

High resistance on this timeframe remains the crucial psychological area of $10,000. Low support is somewhat less clear but might be late May’s lows around $8,600. Closer areas are likely to be in focus in the near future though before either of these zones might be tested again.

Moving averages are currently close to neutral. The 50 SMA has recently completed a weak death cross of the 100. Price is now within the small value area between the 100 and 200 SMAs where it might remain for some time unless there’s some sudden push from a spike in buying volume.

Bollinger Bands (50, 0, 2) have expanded somewhat over the last week, so one might expect volatility to be somewhat higher over the next few days. There’s no indication of saturation from Bands, but the slow stochastic (15, 5, 5) at 86 does indicate overbought. Volume has been pretty consistent since last month, so there’s no clear signal from this indicator. However, traders should remember that volume here only shows the volume for Exness’ spot CFDs on bitcoin, so we can look at deliverable volume for more reliable information. 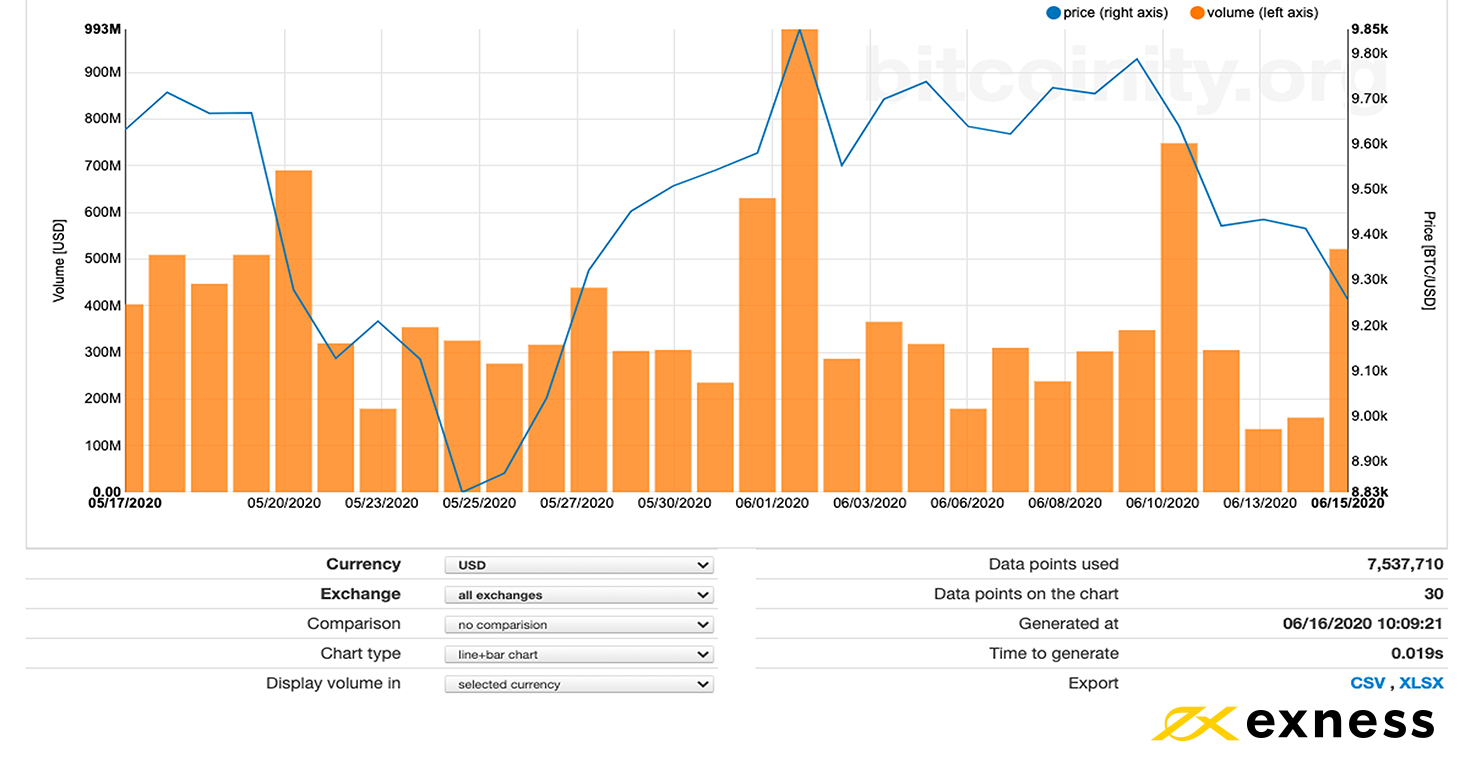 The chart above demonstrates that volume of trading for deliverable bitcoin has decreased somewhat since the middle of May. There have been some spikes, notably nearly a billion dollars on 2 June, but the average is lower than March and April.

These figures would typically indicate that traders are still buying both dips and strength. However, the possibility that the increase around 20 May comprised short-term sellers significantly should not be rejected.

Turning back to spot CFDs on BTCUSD (top image), recent price action seems to confirm the rebound. Taken out of context, the interrupted three soldiers over the last four complete periods would be a strong buy signal. On the other hand, the context within the value area means that this indication should be questioned: buying in here amid overbought would be a risk.

Both the 38.2% and 50% areas from the daily Fibonacci fan remain active, the latter in particular having been the source of the current rebound. The 50% seems to be a strong support which would probably resist another test. Behaviour around the 38.2% will be crucial moving forward although any breakout upward from there would probably be temporary. 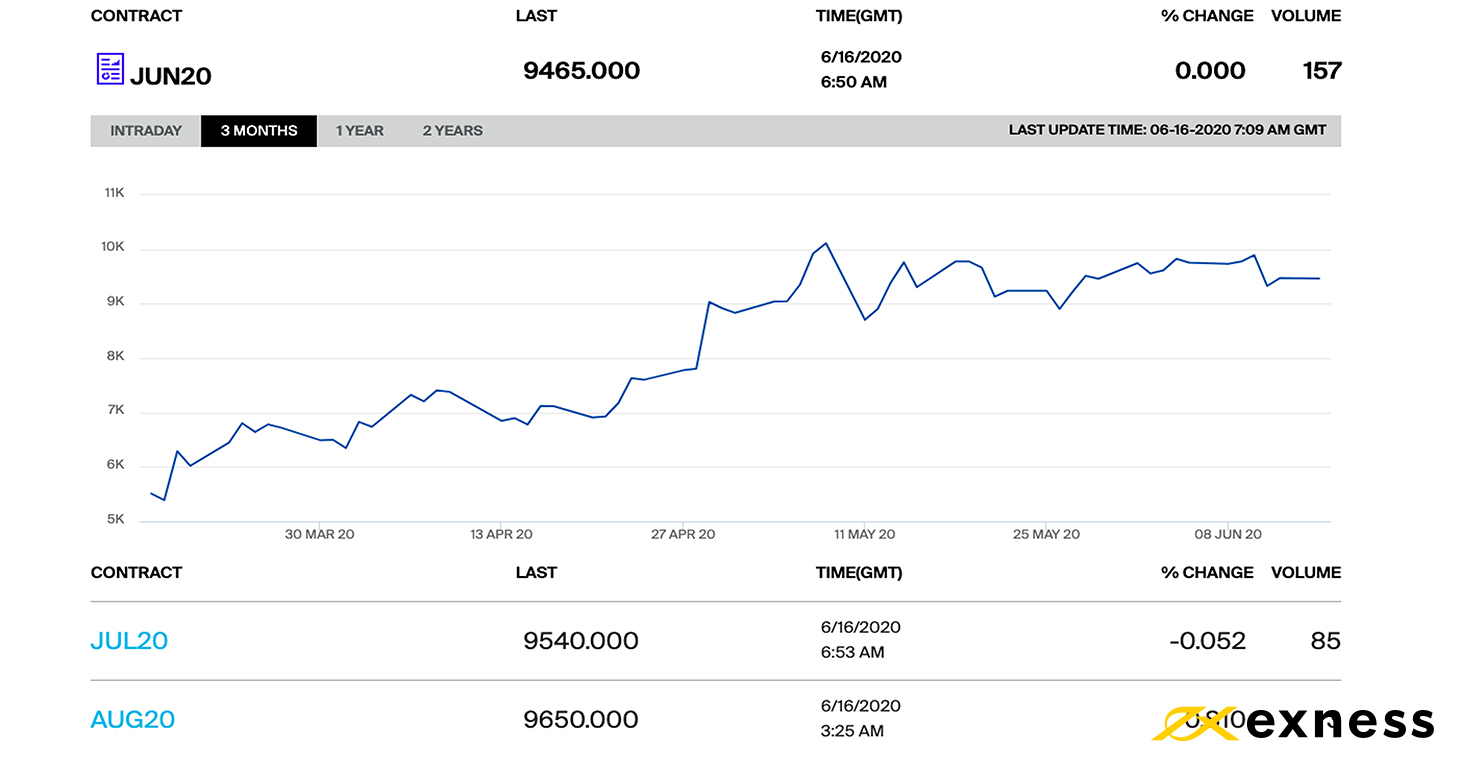 This chart of BTCF demonstrates a bigger drop in volume than either spot CFDs or deliverable bitcoin. Total volume for the next three months of less than 250 is one of the lowest figures in months.

This doesn’t necessarily suggest a signal as to direction but it does imply that relatively lower volatility over the last few weeks has encouraged short-term traders to seek other more active instruments (such as shares). The rebound from the recent low for June’s contract has been weak so far; if volume increases, traders of spot CFDs will probably monitor the situation for futures more closely.

A number of commentators have recently highlighted similarities in the movements of bitcoin and the S&P 500 (the latter is represented by Exness’ CFD US500). This is an about turn from the situation earlier in the year when much was made of a possible correlation between bitcoin and gold as some traders went so far as discussing bitcoin in the context of ‘flight to safety’.

At the moment there’s not enough evidence for traders to act based on a supposed correlation between BTCUSD and US500. We’ll be monitoring this situation, though: stay tuned to Exness’ technical analysis for the latest insights into the themes in markets.

TA overall suggests that bitcoin could continue to make gains in the next few weeks but consolidation is probably more likely. A clear break of the current value area and a retest of one of the zones from the Fibonacci fan might give clues on direction.

Thank you for reading Exness Education’s technical analysis of BTC-USD! Join us again later in the week and on Monday for more analysis of the most active symbols. You can also request a symbol to be covered here by commenting on social media.