Bitcoin has retraced much of its losses in September so far as many traders have observed a high degree of correlation with gold. While volatility remains high as is typical for a cryptocurrency, the uptrend still appears to be active. Today’s technical analysis of BTCUSD looks at the daily chart (D1), deliverable volume and futures on bitcoin.

The clearest high resistance here is the latest high around $12,400. Low support meanwhile is the ‘Vegeta level’ around $9,000, but we can probably point to the key psychological area of $10,000 as being a more immediately important support.

Moving averages continue to give a fairly strong buy signal, with each of the 50, 100 and 200 SMAs successively above slower lines. However, the 50 SMA from Bands remains above price after losses at the beginning of the month. The key support in focus from moving averages is the 100 SMA which capped losses over the last fortnight. This strengthens the idea that $10,000 will continue to be an important area of support.

There’s currently no indication of saturation from either Bollinger Bands (50, 0, 2) or the slow stochastic (15, 5, 5). The latter at about 43 now is closer to neutral than oversold. Gains so far this week came as the stochastic completed an upward crossover in oversold, which might indicate continuation upward as opposed to just a short-term bounce.

The relatively long tails and lack of clear direction around the 100 SMA last week and before suggest that demand to push price below $10,000 is lacking. This week’s three soldiers would typically indicate ongoing gains, especially in the context of a recent upward crossover of the stochastic in oversold and coming just above what appears to be a key support.

$10,000 as support is strengthened further by the presence of the 61.8% Fibonacci retracement area just above. To the upside, though, there are several hurdles for price to pass based on Fibonacci. The most important of these is likely to be the intersection of the 23.6% retracement with the 61.8% zone of the fan (the lowest diagonal yellow line). 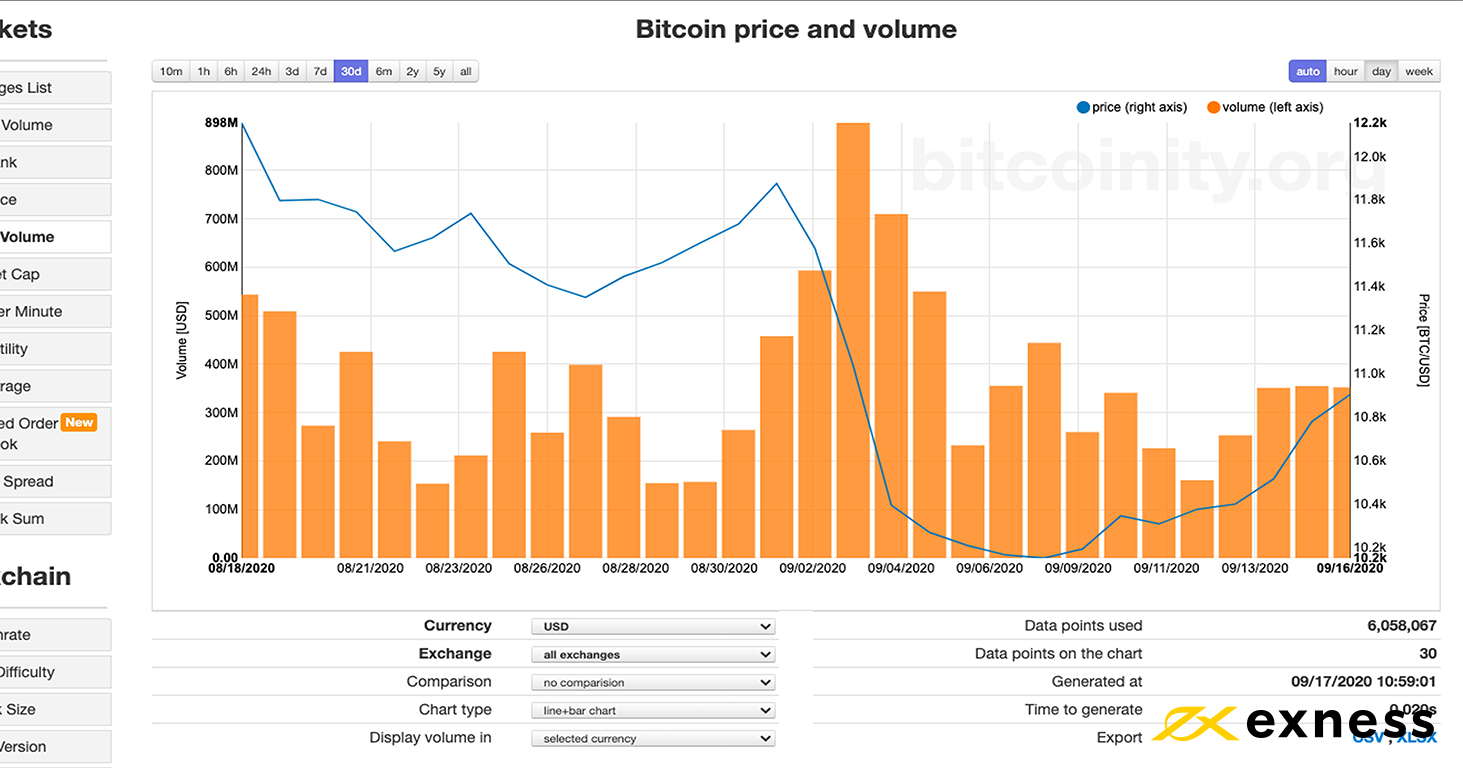 This chart of volume for deliverable bitcoin can be interpreted in a number of ways. The spike in volume to nearly $900 million during losses at the start of the month probably consists of both new buyers in the medium term ‘catching the knife’ and short-term sellers speculatively exploiting bitcoin’s tendency to drop sharply over several hours when a small selloff begins. However, it’s possible that the new buyers might significantly outnumber the short-term sellers. There isn’t a really clear signal here. 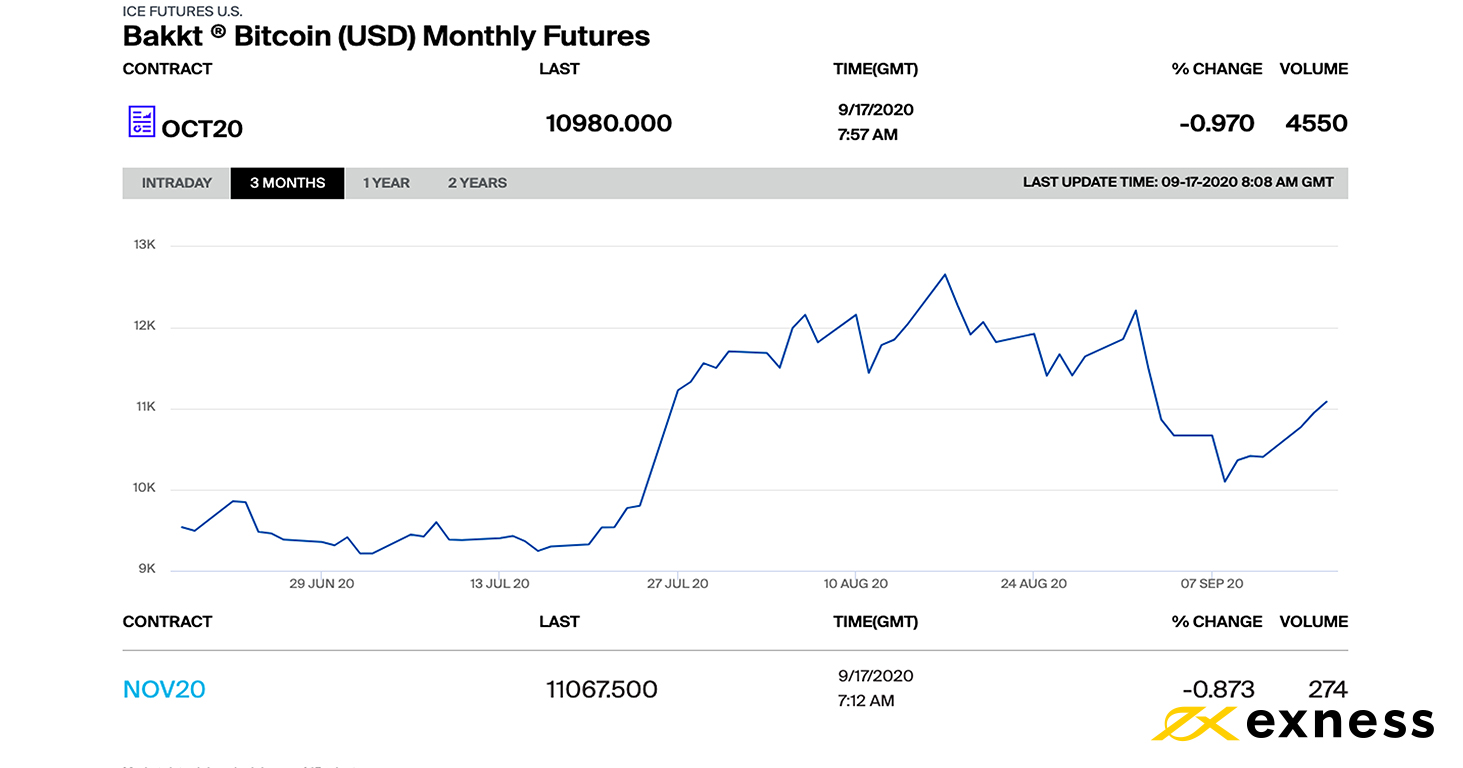 Bakkt’s bitcoin futures basically reflect the picture for the spot CFD quite closely. We can see the recent highs in late August, then the drop at the start of this month and finally the current retracement upward. The main factor of key importance here is volume: 4,550 is the highest figure ever recorded for a single month. This again doesn’t necessarily signal more gains immediately, but in the context it does suggest that the uptrend will continue.

The technical picture for bitcoin is overall quite positive, and we can probably expect at least a retest of the latest high sooner or later. Given the signs of significantly greater participation in crypto markets and especially bitcoin over the last few months, volatility might start to increase again into the end of 2020.

Thank you for reading Exness Education’s technical analysis of BTCUSD! Please join us again tomorrow and on Monday for more analysis and our weekly preview of data. Don’t forget that you can ask us to write about a symbol here by leaving a comment on Facebook.