One of the rarer exotic pairs, franc-lira (CHF–TRY) has generally moved in line with other instruments that have similar drivers. Click on the image above to magnify. As a haven, the franc has generally made gains amid high volatility against most currencies since yesterday’s open. The dominant recent fundamental factors for the lira though, especially Turkish involvement in northern Syria and foreign reactions to this, remain active in the background.

High resistance on this chart is likely to be yesterday morning’s high above ₺6.71. Low support could be the area of ₺6.33, the extent of last week’s retracement downward. Realistically though there’s a number of supports above ₺6.33 more likely to bar movement lower in the near future.

Moving averages in their usual combination of 50 (from Bands), 100 and 200 continue to give a buy signal. Each line remains successively above the others and the wider gap between the 50 and 100 SMAs in particular suggests higher momentum upward. The 50 SMA will probably be a key support given that price tested this area for several days last week without success.

Price is no longer within the overbought zone based on either Bollinger Bands (50, 0, 2) or the slow stochastic (15, 5, 5). Parabolic SAR has recently replotted above price, which in the context would suggest a degree of retracement or consolidation for the next few periods. Although volumes have remained basically the same for several weeks, this isn’t really a signal given the generally very low volume for a rare symbol like this.

The behaviour of price on emergence from overbought would suggest consolidation and/or retracement. One can observe the two long tails from Monday’s third period and the period which has just finished. These would suggest that while selling demand remains, it’s not enough to drive the price to a lower actual close.

Fibonacci seems to support this impression of a consolidation, with the two long tails just mentioned overlapping the area of the 38.2% Fibonacci retracement. If price manages to close below this area, one might expect a longer and possibly deeper consolidation. 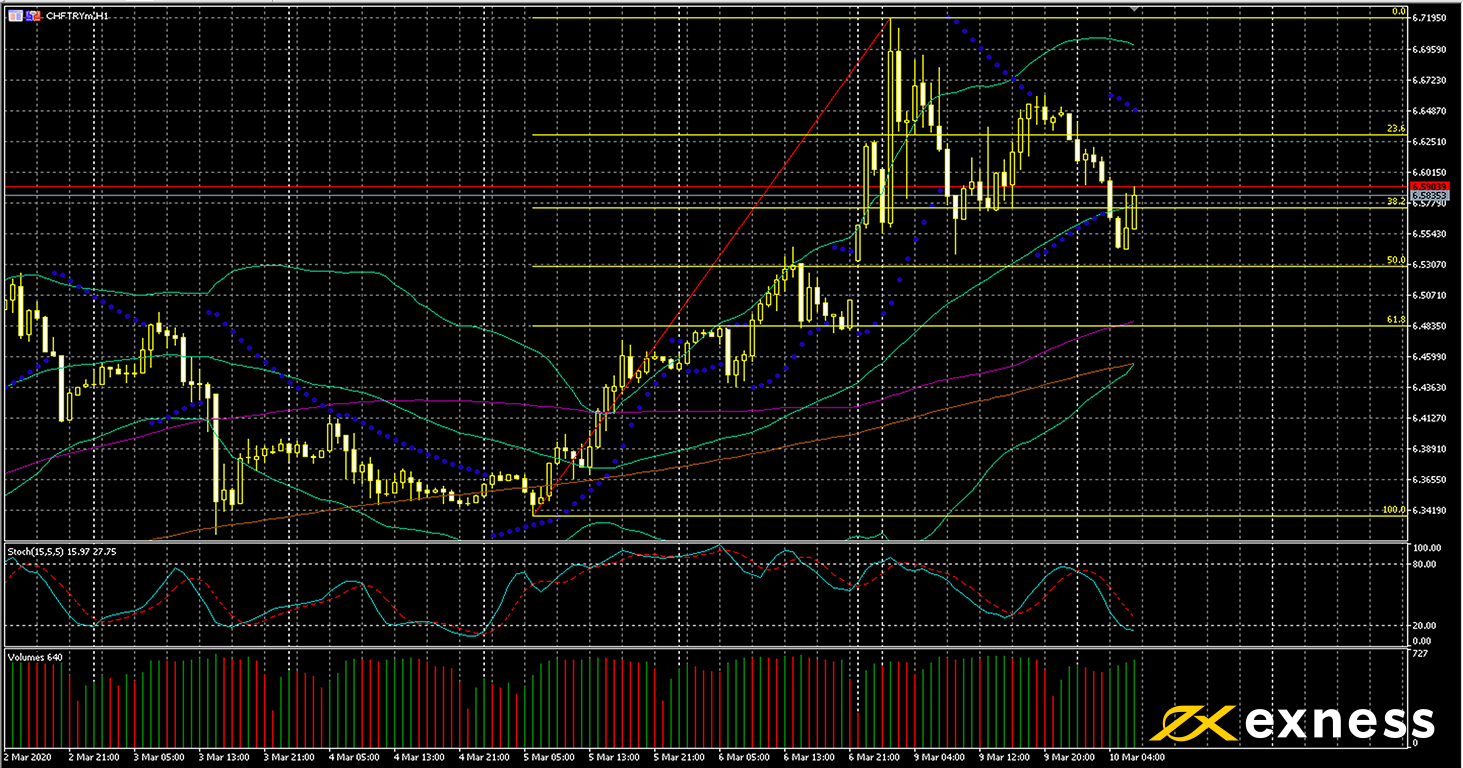 The picture on the hourlies isn’t very different from the overall impression from the four-hour chart. Traders can discover that the long tails on H4 do translate into closes below the 38.2% Fibo here. Price has also briefly moved below the 50 SMA this week.

On the other hand, the 50 SMA doesn’t yet appear to be such a key support as on the four-hour chart. The slow stochastic is about to complete an upward crossover very close to oversold. If completed and supported by a candle with a decent upward real body, this would be a short-term buy signal.

Franc-lira seems to be set for consolidation over the next few periods on this timeframe. The extent of this in terms of time and distance remains in question. It’s possible that repeated failures to close below the 38.2% Fibo area on H4 could mean less time before the uptrend resumes. On the other hand, one or more closes below this zone might presage a longer time before more new highs.

That said, the lira is likely to be even more volatile than usual this week, so traders must watch fundamental developments closely. Apart from regular Turkish data tomorrow and on Friday, events in stock markets and of course the spread of the coronavirus could alter the technical outlook entirely. Tensions between Turkey and Greece over security of the border in Thrace have moved out of the news so far this week, but a return to focus on this issue and/or northern Syria could bring more instability for TRY.