The Australian dollar has continued to make gains against its American counterpart so far today as Australian shares like many others around the world have risen and ‘risk on’ remains the prevailing mood in markets. Meanwhile the Reserve Bank of Australia continued to stress this week the need for ‘very significant’ ongoing monetary support for the economy and has ruled out the possibility of raising rates for the next few years. Today’s technical analysis of AUDUSD looks at the four-hour chart.

78 US cents is a fairly clear high resistance on this chart, while low support is the psychological area around 70c. Both of these areas might be strong over the next few weeks, provoking a retracement should either be tested; however, the distance of support from the current price might mean that areas from moving averages (see below) and other closer supports could be more important in the near future.

The number of new highs on this chart – five since the middle of November – combined with clearly larger up candles than down suggest a fundamental upward movement, although there is still some short-term liquidity-based selling. The upward engulfing candle on 5 February was followed by strong gains back to the area of the latest high, but momentum has since decreased around resistance.

The most obvious traditional pattern here is the descending triangle from around 7 January to 4 February which has now been broken to the upside. Again, though, resistance around 78c combined with significantly less negative fundamentals affecting the US dollar make continuation upward from here uncertain. A double top seems to be taking shape at the moment: a second failed test of the nearby resistance would traditionally be taken as a sell signal. However, most traders will wait for confirmation of this pattern before acting on it. 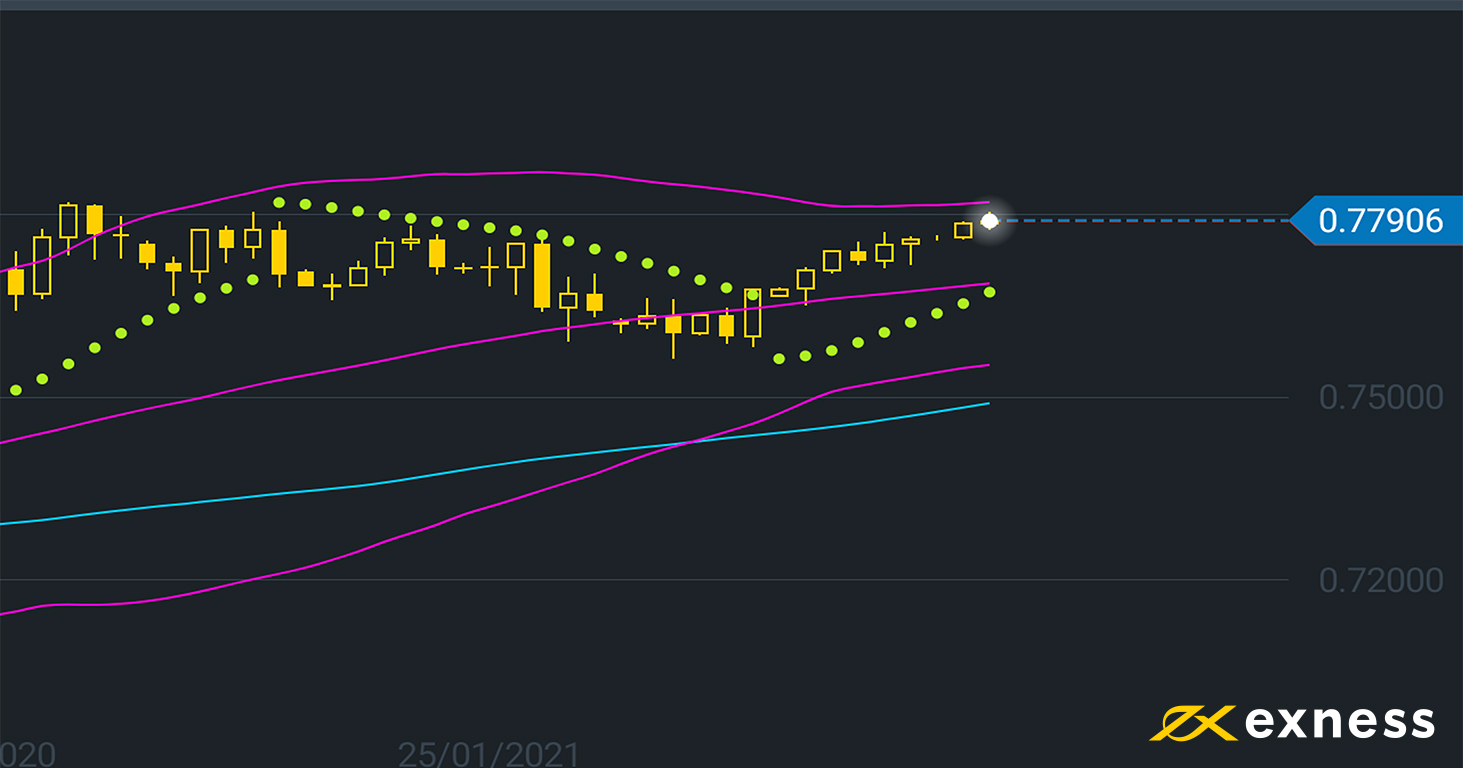 Taking a closer look at recent events on the daily chart of AUDUSD, we can see that the signals from indicators remain positive. Price is above both the 50 SMA from Bands and the 100, while PSAR continues to print below the price since the flip on 5 February. There is currently no indication of overbought from Bollinger Bands (50, 0, 2). Conversely, lower momentum and volatility are evident from the tightening deviations of Bands.

The most obvious support from SMAs is the 100 in the area of 75 US cents, strengthening the potential of this psychological area to generate a bounce in the event of a retracement. Equally, a bounce from around or slightly below the 50 SMA would be a possible scenario if price retreats; the zone between the 50 and 100 SMAs is typically one of the more significant value areas on a daily chart.

Tomorrow’s main release affecting AUDUSD is American monthly retail sales for January at 13.30 GMT. While some volatility is possible around the data, they’re unlikely to affect most pairs with the US dollar significantly unless there’s a major surprise. Aussie job releases on Thursday are likely to be much more important.

Full-time employment change in Australia – essentially the Aussie equivalent of the NFP – is due at 0.30 GMT on Thursday, with the consensus currently standing at around 40,000. This would be lower than December’s 50,000 but if correct might still be quite positive for AUD given that employment down under has now returned to about the same levels as this time last year according to recent data from the Australian Bureau of Statistics. The rate of unemployment in January in Australia – also due at 0.30 GMT on Thursday – is expected to have decreased slightly to 6.5%.

Overall the technical picture for AUDUSD remains very positive; however, 78 US cents appears to be a strong area of resistance which might continue to resist testing. The focus of traders around Thursday morning’s data is whether a breakthrough can be achieved above US$0.78; if not, a rangebound movement for several days seems to be favourable.

Thank you for reading Exness Education’s technical analysis of AUDUSD! Please join us again later in the week for more analysis. To request a symbol for analysis here, simply leave a comment below any of Exness’ analytical posts on Facebook.