TSLA, the representative CFD based on Tesla, Inc’s shares, has been relatively inactive over the past fortnight, consolidating close to all-time highs. The overall ‘risk on’ mood in markets and record QE continue to be positive for most shares, but in this case buying saturation and very high overvaluation have led to some reluctance among participants to push prices higher. Today’s technical analysis of TSLA looks at the daily chart plus indicators on the four-hour chart.

The most important news so far today affecting Tesla’s shares is the cut to the prices of some variants of the Model 3 and Model Y. The Standard Range Plus Model 3 in the USA is $1,000 cheaper now at $36,990, while the Model Y Standard Range is now $2,000 cheaper. These changes come in the context of Tesla having cut prices of its European Model 3s last month, with some trims’ prices having been reduced by as much as €6,000 in France and €4,000 in Germany.

Tesla remains one of the most overvalued shares in history based on its ratio of price to earnings (‘PE’): confirmed PE for 2020 was 1,247. Furthermore, earnings per share (‘EPS’) for Q4 were fairly noticeably disappointing, coming in at around 60% less than the consensus estimate. EPS for Q4 was 24c against the 63c expected.

On the chart itself, the obvious resistance is the latest high just below the psychological area of $900. Low support might occur around $400 but such a distant area is very unlikely to be tested anytime soon.

Recent movements are generally consistent with a consolidation after very strong gains. There haven’t been any significant gaps up or down except about $50 down from 27 to 28 January. 15 January’s downward engulfing candle – not normally a reliable signal for a CFD on an individual share – wasn’t followed through by a bout of notable losses but did signal the breaking of the upward trendline from 16 November 2020 to 8 January.

10 February might have been viewed as a pre-breakout day from a descending flag by some traders. However, since this is an individual share, obviously such a pattern should not be traded without reference to fundamentals. Indicators on a lower timeframe could inform signals from price action on the daily chart. 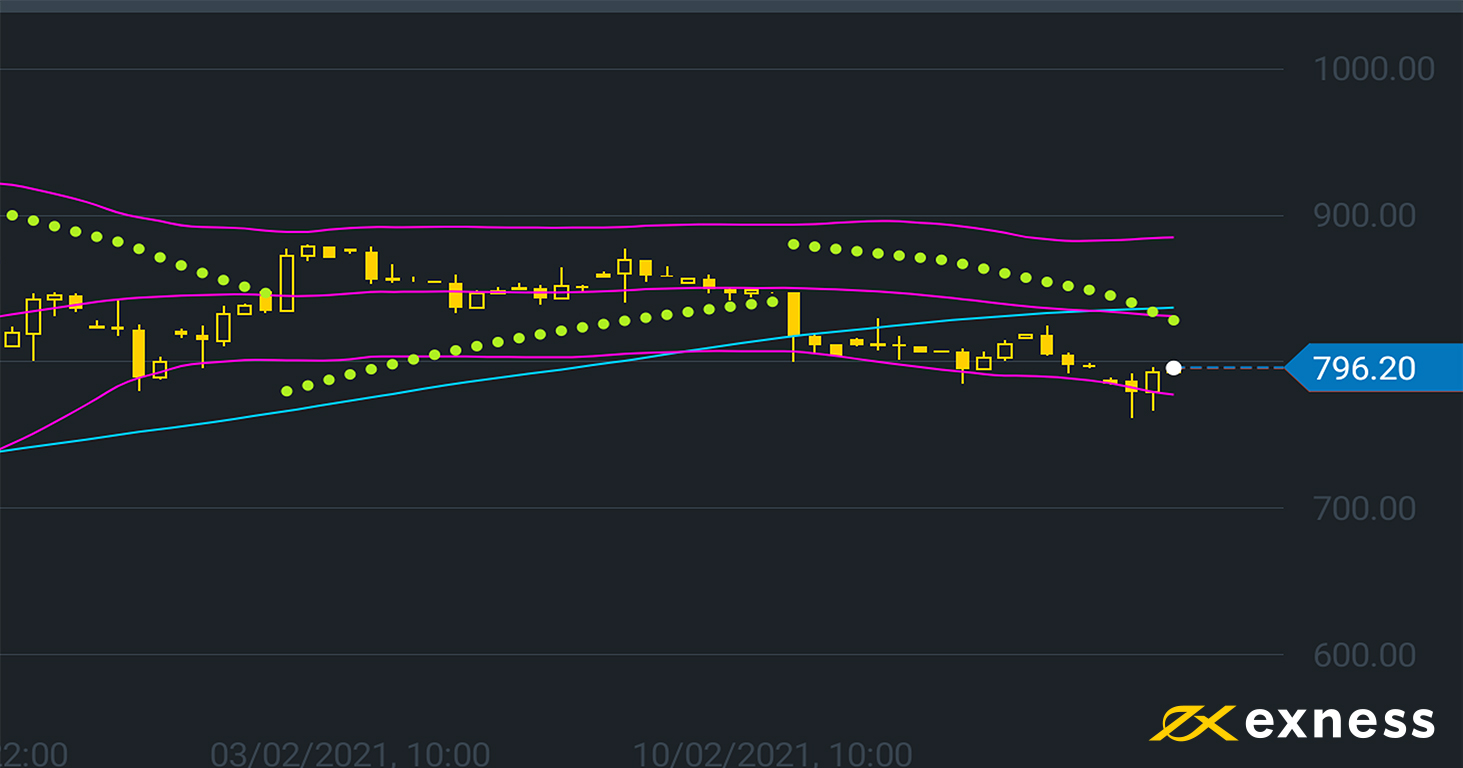 Moving averages continue to give a sell signal on the four-hour chart, with both the 50 SMA from Bands and the 100 above the price and the former having recently death crossed the latter. PSAR meanwhile has continued to print above the price since 10 February’s decline from opening.

However, given the relatively small space between the deviations of Bands, one might expect a breakout over the next few days of trading if fundamentals are on side. Relatively speaking, this is a less risky entry for buyers given that price is close to oversold around important support near $800.

Overall the technical picture for TSLA remains quite positive on the daily chart, with no clear evidence yet that the consolidation might deepen. The catalyst for more gains could be a return to universal demand for tech shares, but traders should not rule out the possibility of a movement lower now that price is slightly below the psychological area of $800.

Thank you for reading Exness Education’s technical analysis of TSLA! Please join us again next week for the usual preview of data and more analysis. To request a symbol for analysis here, simply leave a comment below any of Exness’ analytical posts on Facebook.