Brent crude has continued to consolidate upward so far today, with a retest of the latest high around $46.32 possible. This technical analysis of UKOIL looks at the four-hour chart of Brent in comparison with futures on WTI.

Fundamentals remain somewhat mixed: despite a better outlook for demand from Chinese industry and generally the reopening of economies around the world, supply is likely to increase significantly over the next few months. On the other hand, Iran has committed to cutting about 400,000 barrels per day of production over the next few weeks at least to make up for noncompliance earlier in the year. Widespread reopening of American shale wells is also unlikely in the coming months.

The main resistance here is the area of $46.30 which was briefly reached late last week. Low support on this timeframe could be $43, the limit of recent losses. However, areas from moving averages will probably be more important ahead of any test of the lower zone.

Moving averages remain positive, with each of the 50, 100 and 200 SMAs above slower ones and below price. The 50 SMA around $44.55 is the first support which might limit any retracement. Beyond this, the wider value area between the 100 and 200 SMAs could be stronger if there’s a fairly deep retracement.

There is no sign of overbought from either Bollinger Bands (50, 0, 2) or the slow stochastic (15, 5, 5) although the latter at 70 is closer to overbought than neutral. The current expansion of the deviations of Bands might suggest a continuing movement, seemingly to the upside, but the context at the moment probably favours shorter term trades. Buying volume increased somewhat last week.

The engulfing candlestick from noon GMT yesterday would usually be seen as indicative of ongoing gains. The current period seems to be on track to form a partial three soldiers, albeit with longer wicks and tails than customary for this continuation pattern. At any rate, completion of the current period should be awaited for confirmation.

The daily Fibonacci fan here is based on the initial upward wave from the lows in late April. The 50% zone could be a new area of resistance if price manages to break clearly beyond the latest high around $46.30. To the downside, the 61.8% area will soon coincide with the 100 and 200 SMAs’ value area and strengthen this as a support. 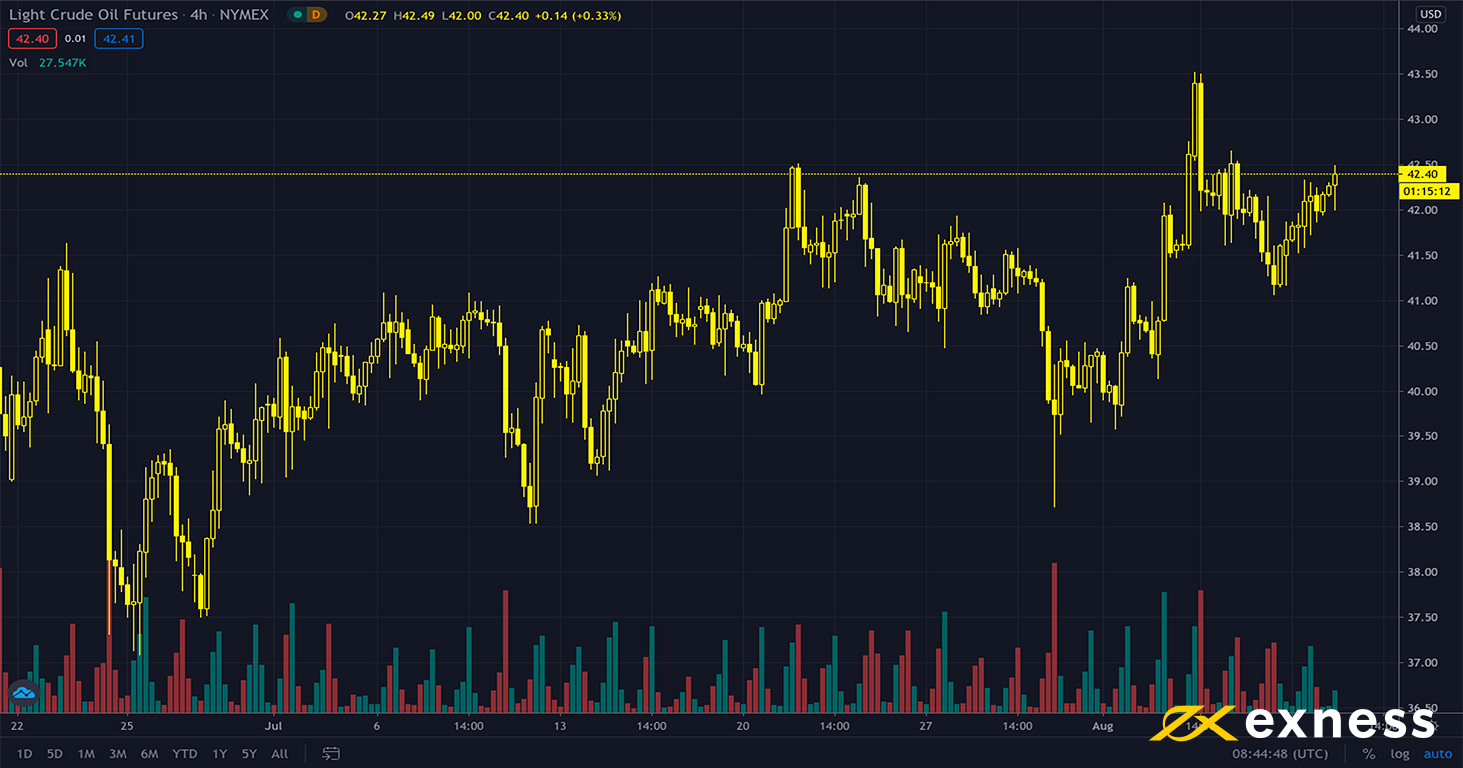 This chart of futures on American light oil (NYMEX; continuous with current contract at front) displays the same overall picture as the chart of spot CFDs on Brent. However, we can observe here that the volume of selling is much higher. The spike in selling at the start of August suggests that short-term traders remain highly active here. 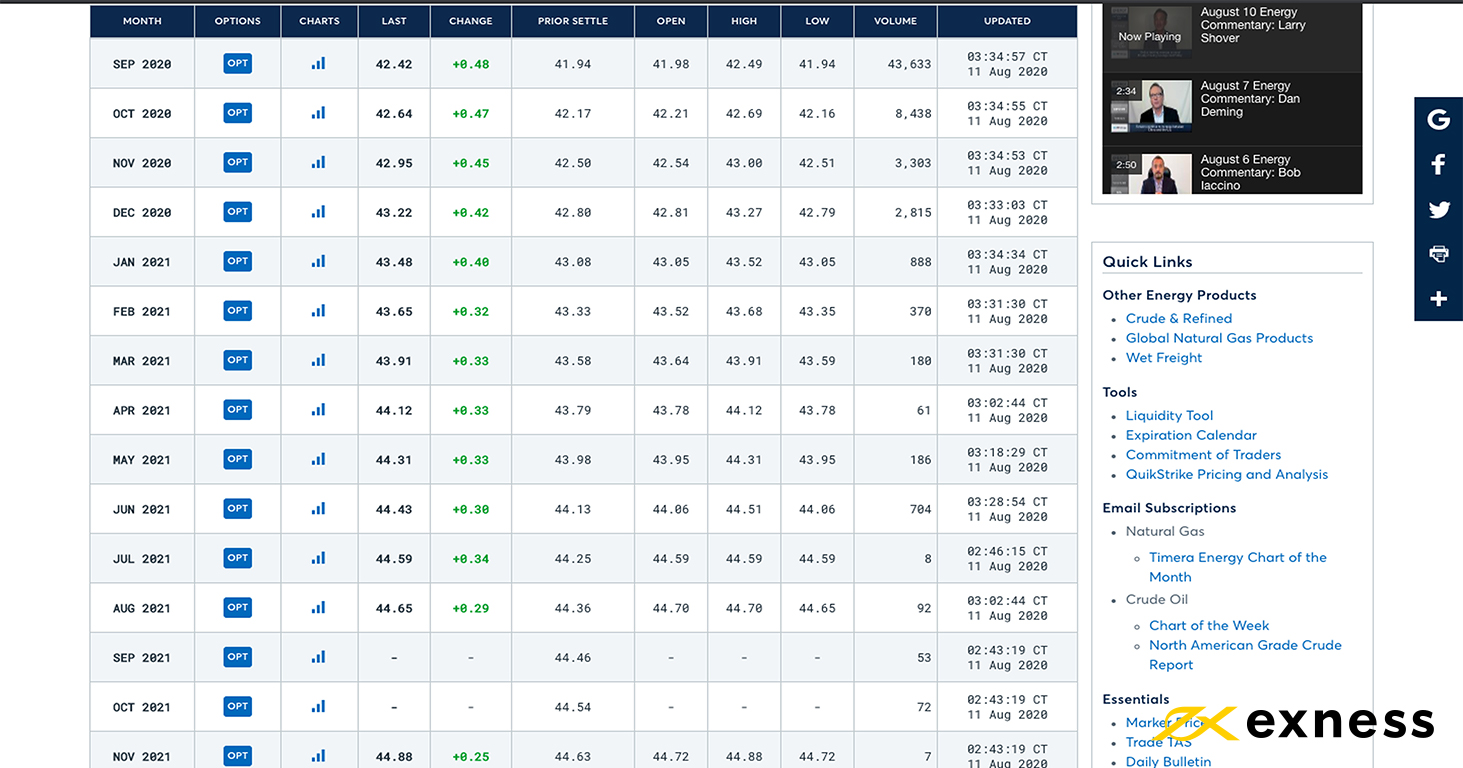 The table of annual prices of futures on the NYMEX for American light oil continues to display a weak contango. The annual difference is now around 5%, which is fairly close to a normal figure and indicates that limited ongoing gains are likely for spot contracts based on crude. The highest reliability can be assigned to this year’s contracts given their significantly higher volumes of trading.

TA overall suggests that more gains are favourable this week for Brent, possibly with a retest of the latest high. On the other hand, traders must not forget to monitor fundamentals, primarily news and sentiment. The API’s crude stocks later this afternoon GMT and the EIA’s tomorrow could also affect the price of UKOIL if the releases are surprising.

Thank you for reading Exness Education’s technical analysis of UKOIL! Please join us again on Thursday for more TA and on Monday for our weekly preview of data. Don’t forget that you can ask us to write about a symbol here by leaving a comment on Facebook.