Brent crude has retreated from early gains today as the recent uptick in tension between China and the USA is feared to affect demand for fuel. Yesterday weekly stock data from the EIA was significantly weaker than expected, with a gain of nearly five million barrels in American stocks against the consensus for a drop of about two million. Today’s initial gains for oil came as the dollar reached a four-month low against various currencies.

$45 is an important psychological resistance that has yet to be overcome. Beyond this, the daily Fibonacci retracement area of 61.8% could be important slightly below $46. Low support here is likely to be around $40, the other crucial psychological area. Before $40 though there is a number of areas from moving averages and Fibonacci that could function as supports.

Moving averages continue to give a strong buy signal with all three of the 50, 100 and 200 SMAs successively above each other and below price. Based on behaviour over the last few weeks, the 100 SMA is probably the most important as a support. Meanwhile the 200 will likely be a noteworthy support if there’s a significant retracement.

Although price is not now overbought based on either Bollinger Bands (50, 0, 2) or the slow stochastic (15, 5, 5), it remains very close to it by both measures. Volume so far this week is basically consistent with the average earlier in the month and last month.

The current relatively large candle with a fairly long wick is a fairly common sight in the context of an important resistance. It will probably take several attempts and possibly some notably positive news for Brent to break through $45. Generally speaking, volatility has been low by oil’s standards in July, so any upcoming retracement might not be especially deep.

Price has tracked the middle line of the daily Fibonacci fan quite closely over the last few fortnight. If the resistance around $45 is broken over the next few periods, we can probably expect this to continue. To the downside, the 50% daily Fibonacci retracement area is likely to be an important support if Sino-American tensions suddenly surge or other seriously negative fundamental news comes out. 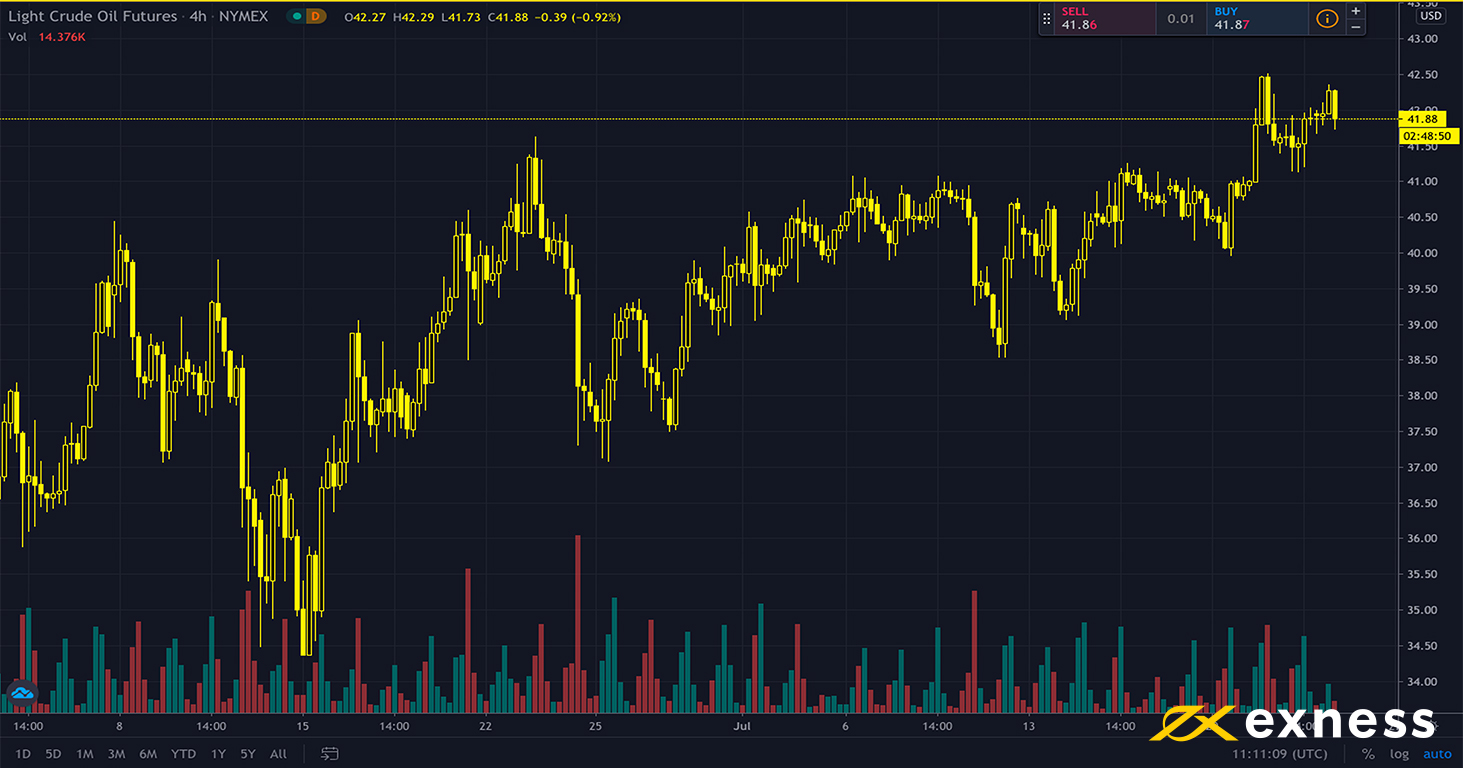 This chart of futures represents USOIL (NYMEX, continuous with current contract in front), not Brent, but still reflects recent movements for the British benchmark fairly closely. Resistance around $42.50 here coincides with Brent’s $45 and volatility has also been comparatively low. Here, though, buying volume is still pretty high, so more gains seem to be possible if some tailwinds can be found from positive news. 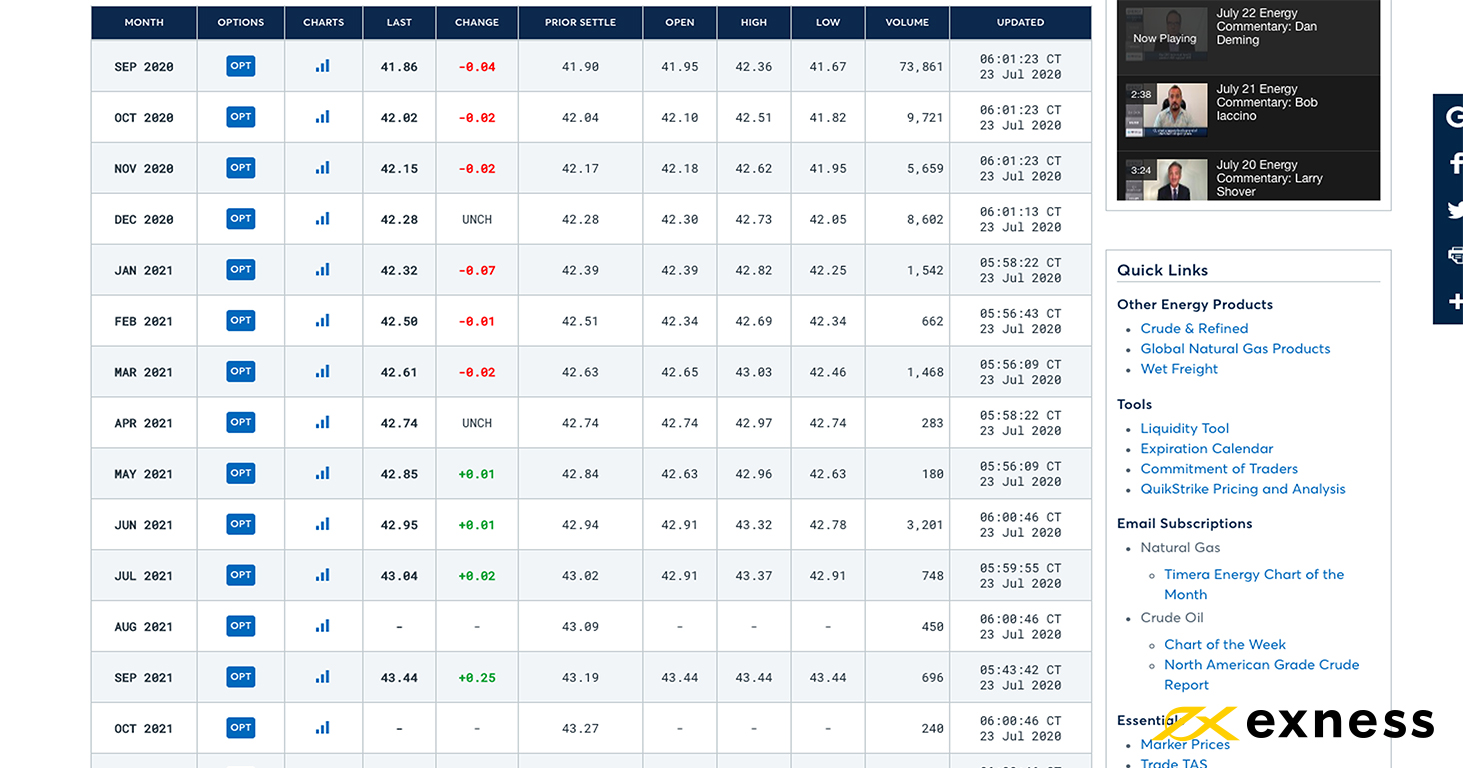 This chart, also based on data from the NYMEX, seems to confirm the impression of ongoing lower volatility for the time being. The annual contango has now dropped to less than 5%, suggesting that the current resistance for spot CFDs could be broken but not particularly soon. OPEC+’s decision to release an extra two million barrels per day to markets next month has now been completely priced in here, but other events such as the war of words between the USA and China plus possible further spikes in corona cases could drive instability.

The technical picture for Brent is quite positive but $45 seems to be a strong resistance. This means that consolidation into next week could be a favourable scenario. Fundamentals for oil as other instruments remain fairly unstable, though, so traders would probably do well to monitor the news closely over the next few days.

Thank you for reading Exness Education’s technical analysis of UKOIL! Please join us again on Monday for our weekly preview of data. Don’t forget that you can ask us to write about a symbol here by leaving a comment on Facebook.