The dollar has mostly held its recent gains against various emerging currencies including the peso. Click on the image to magnify. USD–MXN has been a bit less active this week although there has been an attempt to move back up into the top half of the range that has been active since late March.

High resistance on this chart is the upper limit of the recent channel around Mex$25.50. Low support is the lower limit in the area of $22.90. Both of these areas seem to be fairly strong and likely to resist testing within the near future.

Moving averages continue to give a buy signal, although there has been considerable bunching of the 50 SMA from Bands and the 100 SMA with price. The 200 SMA has now moved back within the lower deviation of Bollinger Bands, strengthening the bottom area of the current range as a support.

The slow stochastic prints an overbought signal at 87 although the signal line remains very slightly outside the zone of saturation. Buying volume has remained consistently fairly high on this timeframe although selling has gained pace since the middle of March; this is consistent with the current phase of rangebound activity.

Price action at the start of the week suggested weaker momentum lower and the possibility of c.$23.35 being a support. The current period though could be crucial: it might form a downward engulfing pattern, which would suggest upcoming losses. However, confirmation should be sought from the completion of the current period.

Fibonacci retracement here, drawn based on the daily charts, frames the ongoing range quite neatly. Both the recent top and the 38.2% retracement were the sources of bounces in late March and earlier this month.

Comparison with the daily charts 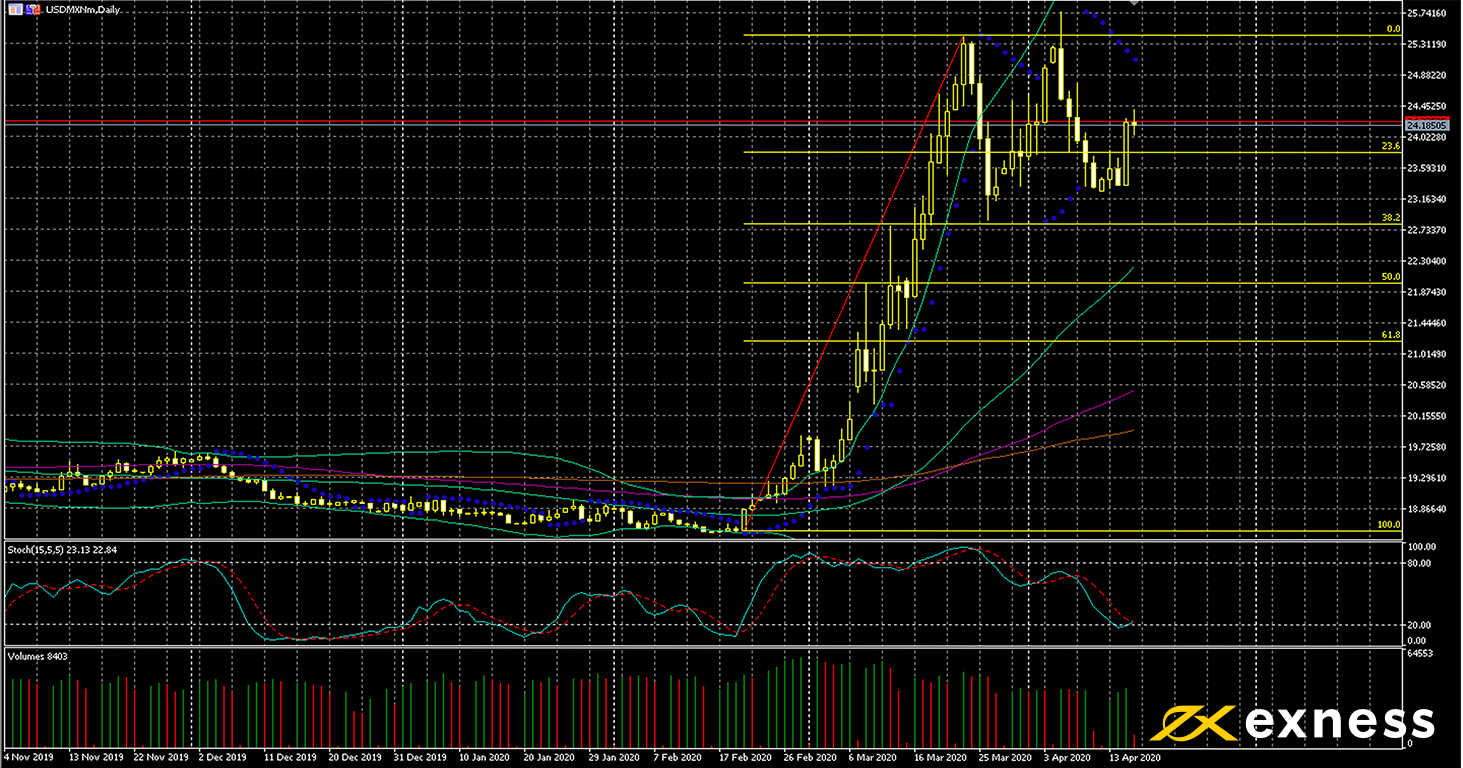 The uptrend certainly appears to be active based on this higher timeframe, with clear indications from MAs, volume, the stochastic and price action that gains could continue. Click on the image to magnify. Since the dollar already made all-time highs against the peso in March, more highs are fairly likely sooner or later.

While the short-term focus is probably on losses and a retest of the 38.2% Fibo, on this timeframe one might expect the current consolidation to end sooner or later and this test of the 38.2% to be met with another upward wave.

Although the dollar isn’t a haven to the same extent as instruments like gold and the yen, in pairs with emerging currencies it usually reacts positively in times of crisis. Many of the same factors like events in stock markets, politics, monetary policy and of course covid-19 will have an impact for USD–MXN.

The additional factor in this case is the peso’s correlation with crude oil. This relationship is currently very strong, with the peso having followed USOIL’s losses quite closely so far in 2020. Ongoing debate about non-OPEC+’s cuts to production and particularly those of Mexico itself is likely to be very important for the peso’s fundamentals over the next few weeks.

Continuation of the current phase of consolidation seems to be favourable in the short term for dollar-peso. The next break would probably be to the upside, but when this might happen remains uncertain. This symbol’s consistently high volatility and usually strong reactions to news make relying solely on TA at present risky and probably unwise: traders also need to follow the news and monitor data.