USOIL has held on to recent gains this week above $25. Click on the image to magnify. The big news yesterday was the first drop in American inventories according to the Energy Information Administration (EIA) since January of this year. American stocks of crude oil dropped by around 745,000 barrels last week as announced yesterday. Oil’s reaction to the EIA’s release was muted, with the current price around $26.15 only about 65 cents above where the commodity started the week. Today’s technical analysis of USOIL looks at futures as well as charts of spot CFDs.

This four-hour chart’s most important high resistance is probably the psychological area of $30, slightly above the top of the screen. Low support is last month’s low around $10, although this latter area is unlikely to be challenged next week unless the news takes a sudden and dramatic negative turn.

Moving averages give a fairly strong buy signal at the time of writing. The 50 SMA from Bands is above both the 100 and 200 SMAs. The faster MA has also completed golden crosses of both of its slower counterparts since the second half of last week. The most important immediate support from moving averages is probably the 200 SMA, currently around $23.40.

The slow stochastic (15, 5, 5) is close to neutral at the time of writing, with both lines printing about 58-59. Volumes have been significantly lower for most of May so far compared with the average in April. We can also observe a contraction of the deviations from Bollinger Bands, which would usually suggest ongoing consolidation.

Recent price action has been fairly insipid with no significant movement in either direction. The relatively large wicks and tails at the start of the week appeared to foreshadow some indecision and reluctance to commit among traders which is still manifest on the chart.

The test of the 38.2% area from the Fibonacci fan (based on the daily chart) last week was very successful; price is now testing the 50% Fibo. A daily close clearly above this middle area of the fan might signal ongoing gains at least in the short term. 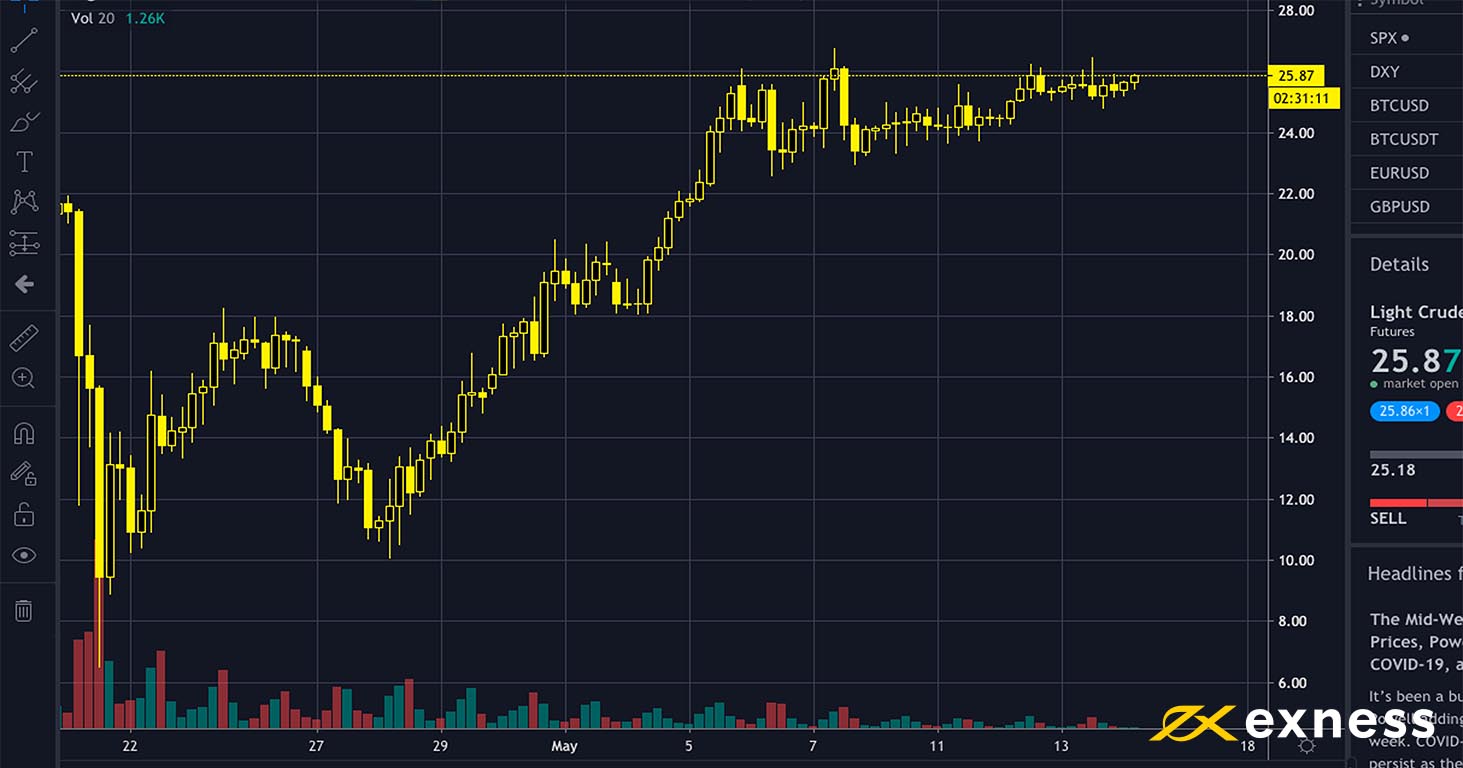 The situation for futures on USOIL (NYMEX; continuous with current contract in front) is basically similar to that for spot CFDs. Click on the image to magnify. The difference lies mainly in how low futures went last month, below zero, and the relatively strong bounce from negative prices.

The difference in price between spot CFDs and futures is now much closer to ‘normal’. As is the case for Exness’ USOIL, though, there is no clear demand at the moment either to push price much beyond $26 or drive it back down to retest $20. Volume here is also exceptionally low compared with the average in March and April; this apparent lack of interest aligns with the lack of direction at the moment. 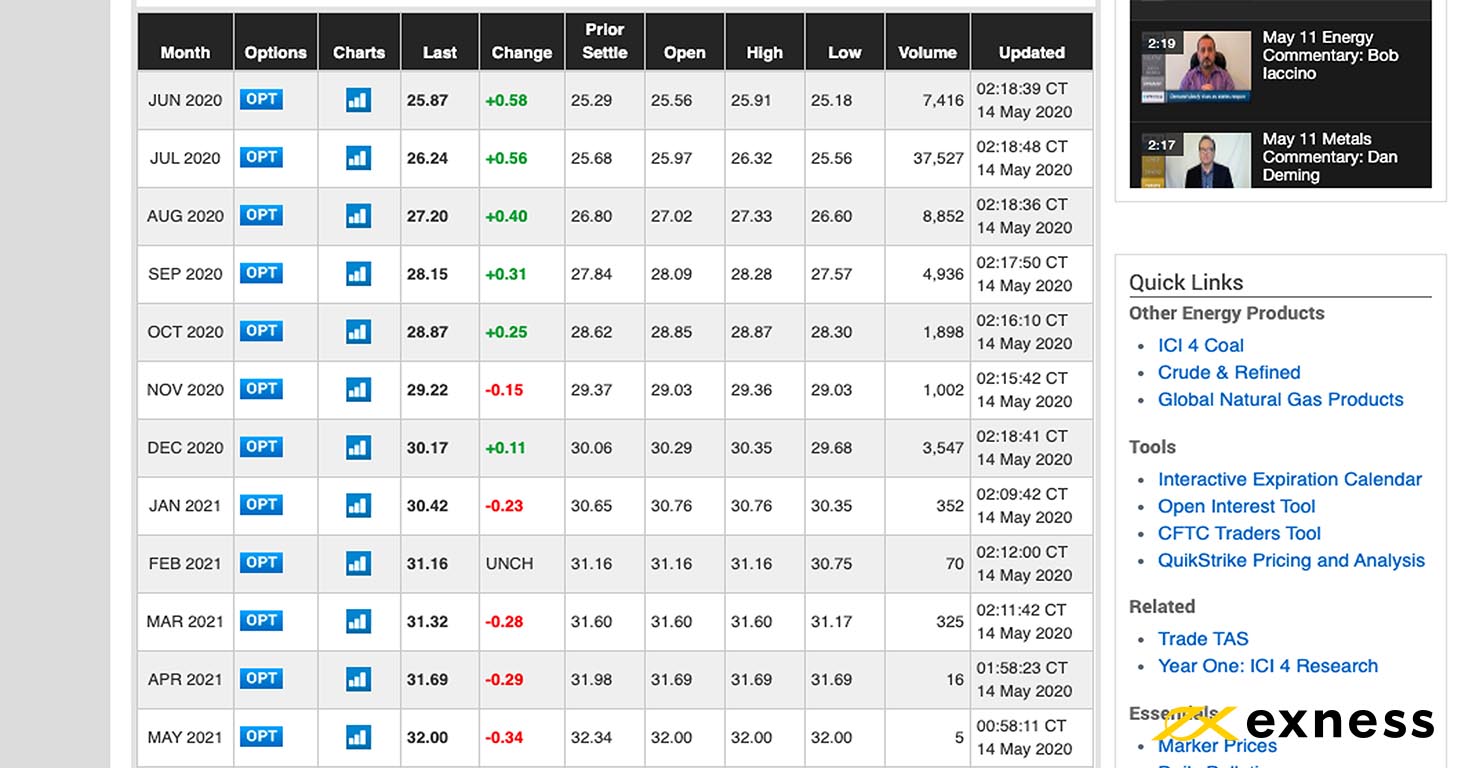 The present contango for WTI over the rest of the year has become shallower over the past week or so as earlier contracts have made gains and later ones moved down somewhat. Click on the image to magnify. This basically reflects slight improvements in the outlook for demand in the short term combined with a generally very weak forecast into the end of 2020.

If this general situation of shallow contango continues, it’s reasonable to expect more medium- to long-term traders reentering the market. If this does occur, one would expect the differential in price between Brent and USOIL to increase because of the generally lower long swaps applied to CFDs on the former benchmark.

USOIL’s consolidation will probably continue until the next important data in the new week. Based on the current lack of saturation and direction, this environment is unfavourable for short-term traders, so an increase in interest among swing traders and so on could bring more direction next week.

Thank you for reading Exness Education’s technical analysis of USOIL! Please tune in again next week for our preview of the most important economic data on Monday, more TA on Tuesday and Thursday plus traders’ tips. Don’t forget that you can request a symbol to be covered here by commenting on social media.