Oil’s string of losses over the past six weeks appears to have halted for now. Last week was the commodity’s first weekly gain so far in 2020, with price moving up fairly consistently, closing on Friday above $52.40. High resistance on the daily timeframes could occur at around $60, although in practice areas below this are much more likely to be important in the immediate future. Low support seems to be the recent 14-month low slightly under $49.70.

Moving averages continue to indicate a sell signal on this timeframe. Price remains quite far below the 50, 100 and 200 SMAs. The 50 SMA from Bands also recently completed a death cross below the 100. It seems likely that there will be a death cross of the 50 SMA with the slower 200-day moving average as well at some point this week.

Saturation though is no longer in evidence on this timeframe. Price has moved clearly back within the lower deviation of Bollinger Bands (50, 0, 2). The slow stochastic has also moved back into positive territory, with 64 for the main line actually closer to overbought than oversold.

The key area based on Fibonacci on this timeframe is the 61.8% zone from the downward Fibonacci fan. This seems likely to function as a strong resistance which could resist testing. Above this, the 23.6% retracement area based on the overall downward movement in 2020 could also act as a barrier to further gains.

Price action reflects a degree of indecision on this timeframe. The double bottom early last week and in the middle of the week before with prices below $50 was met with fairly enthusiastic upward pressure each time. In neither case though has price yet managed to sustain more than two consecutive days of gains. 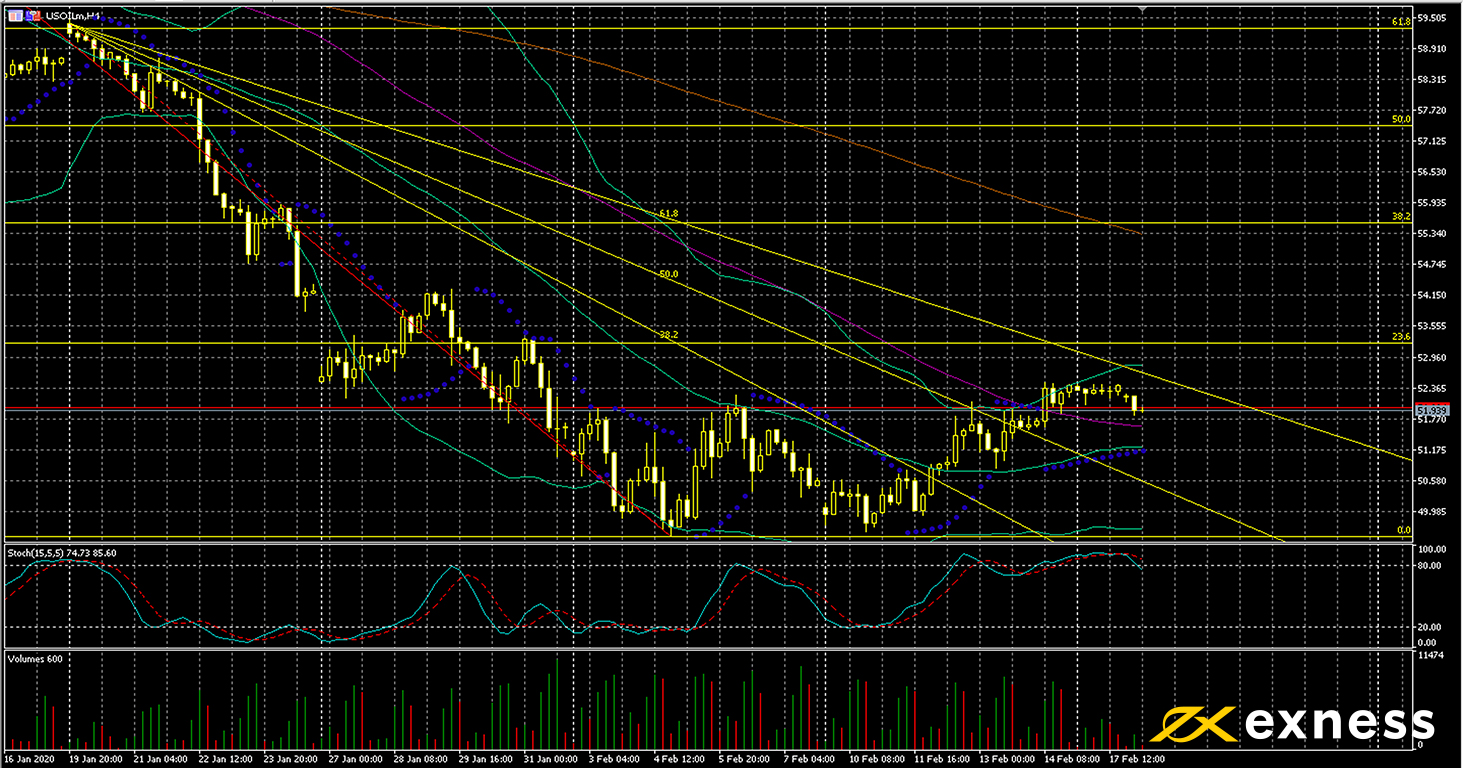 Comparison with the hourly chart gives us a fairly similar picture to the dailies. Click on the image to enlarge. In this case, though, it’s overbought that’s been a feature much of the time since the middle of last week. The slow stochastic recently completed a downward crossover within overbought and the main line has now moved out of the trigger zone for buying saturation. Based on Bands, though, there has been no clear sign of overbought since Friday afternoon GMT.

There also hasn’t been a serious attempt yet to test the 61.8% area from the Fibonacci fan. If this occurred, one might expect a reaction downward, at least in the short term, unless the movement was driven by very good data or news. It’s possible that the 100 and 50 SMAs here could function as supports this week, but traders should probably wait for at least one failed test of each before relying on this. 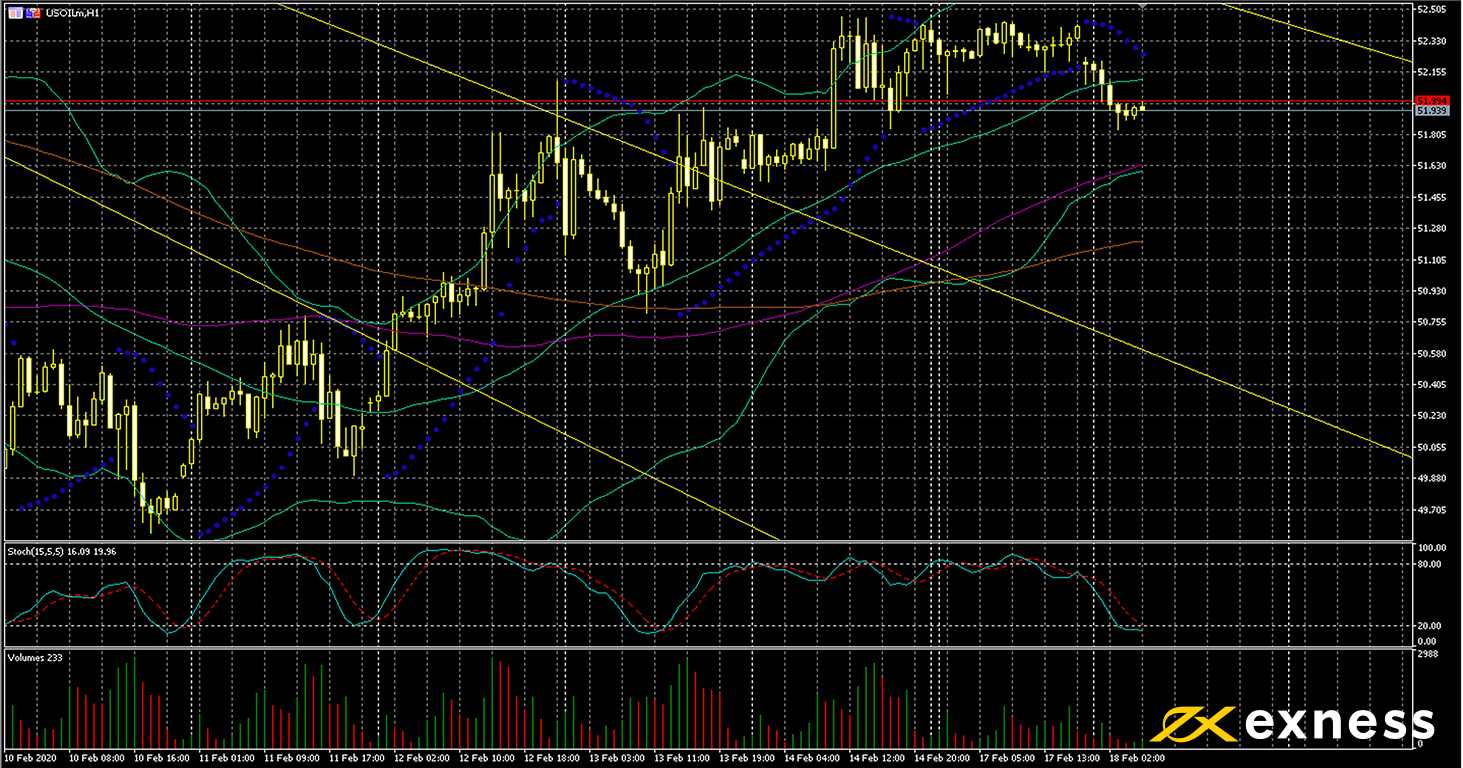 Looking here at the more tactical hourly timeframe, we can observe that the latest consolidation seems to be set to deepen over the next couple of days. Click on the image to enlarge. There wasn’t much support from the 50 SMA here although the 100-hour moving average might be a bit stronger.

Volume yesterday was also significantly lower in both directions. Some traders will be looking for a bounce from the confluence of the lower deviation of Bands and the 100 SMA to buy in. Others might be waiting for a breakthrough to the downside from this area to start selling again.

Overall there are two scenarios that seem to be most favourable this week. The first is continued retracement upward based on the daily charts, possibly with a breakthrough from the 61.% zone of the Fibonacci fan. The other is a continuation of 2020’s main downtrend. The latter scenario’s immediate target would be yearly lows slightly below $50.

Any trader speculating on oil at the moment though needs to be acutely aware of fundamentals. News of the coronavirus as well as weekly stock data from the USA both have the potential to alter the technical picture significantly. It would be wise to monitor both the media and the economic calendar carefully this week.