American light oil has continued to make gains over the last few days of trading. Click on the image to magnify. Some of the important fundamental factors driving this movement include two successive drops in American stocks of crude according to the Energy Information Administration, the gradual reopening of various economies after lockdowns and a general ongoing reduction of the supply glut. This technical analysis of USOIL looks at the daily chart, futures and the contango.

The most important low support on this chart remains last month’s low around $10. High resistance meanwhile could occur around the key psychological area of $50. Both of these areas though are quite far away from the current price, so other zones will probably be in greater focus in the immediate future.

Moving averages on this daily chart continue to print a sell signal, with all of the 50, 100 and 200 SMAs successively below each other. Only the 50 SMA from Bands has started to react to recent gains by moving upward slightly. The first important resistance from moving averages here is the 100 SMA slightly below $35. If this is breached, an extended consolidation within the value area between it and the 200 SMA is possible.

The slow stochastic (15, 5, 5) prints a strong overbought signal at the time of writing: 98 is very close to the maximum reading. Bollinger Bands (50, 0, 2) as yet do not indicate overbought, though. Volume so far in May is somewhat lower than around April’s big losses but still relatively high compared to the average before the crisis.

The interrupted three soldiers last week and yesterday would usually be taken as signalling ongoing gains sooner or later. The main movement for crude typically lasts a bit longer than forex’s two or three days, but more than four days of consecutive gains is rare, especially within overbought.

Tests of both of the lower zones of the Fibonacci fan have now been clearly successful, so the next target for many short-term buyers is the 61.8% area which price is currently testing. The current zone is likely to be very important because the 61.8% Fibo coincides with the upper deviation of Bands and more importantly the 100 SMA. 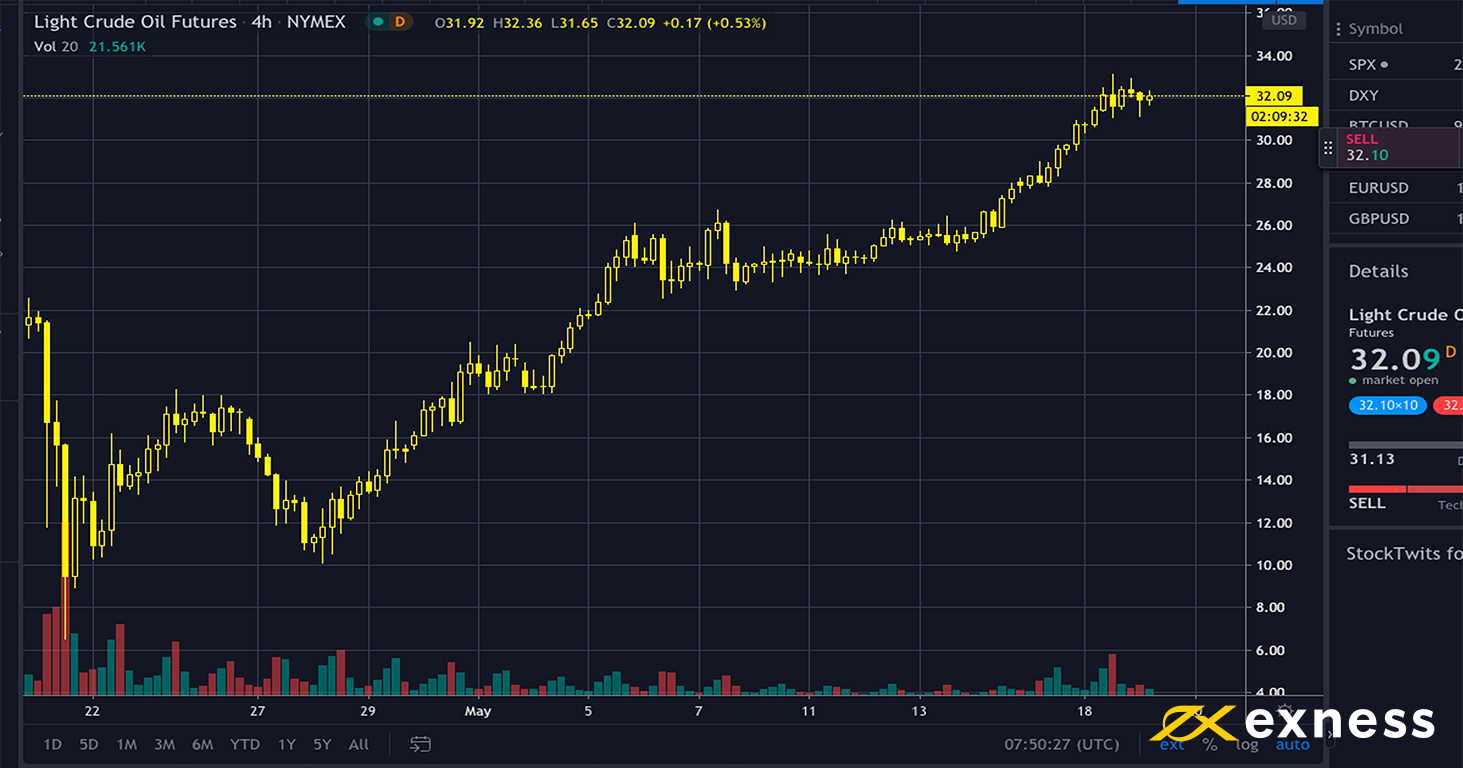 This chart of futures on light crude oil (NYMEX; continuous with current contract on top) basically coincides with the chart of spot CFDs on crude. Click on the image to magnify. The ‘return to normal’ has been ongoing for most of May so far. Futures have bounced somewhat more strongly from last month’s lows because they touched negative prices briefly.

Volume here remains fairly low compared with spot CFDs. We can also observe price action over the last few periods with reluctance seriously to test $34. This would typically suggest consolidation over the next few periods. 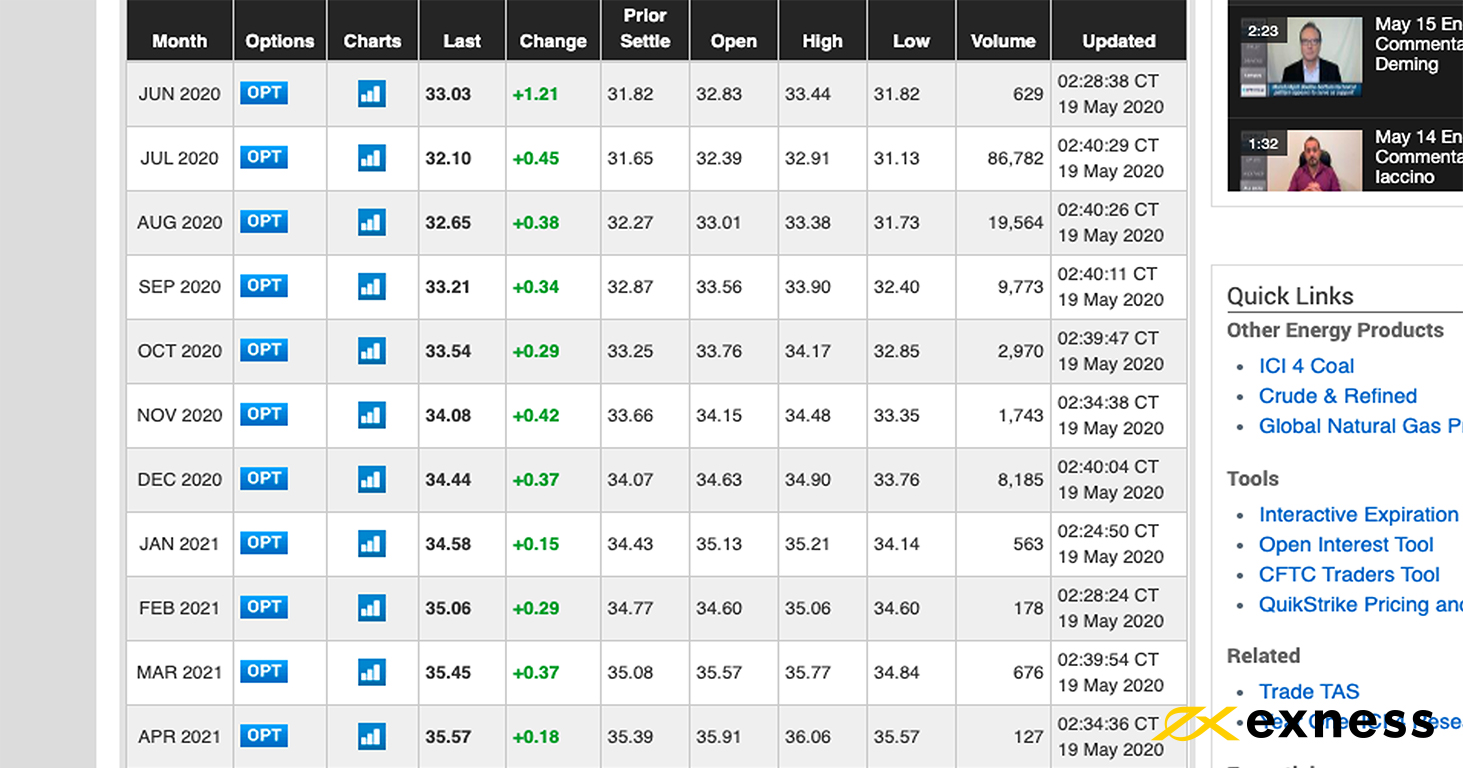 Based on these data from the NYMEX, WTI’s contango has contracted significantly over the past fortnight. The annual difference in price is now only slightly more than 10% compared with around 250% at the start of the month.

This still suggests that a degree of recovery is possible into the end of 2020. On the other hand, large movements for the next few months’ contracts are probably over for now. These figures could imply that longer term traders might be returning to crude oil in greater numbers now that prices have generally stabilised.

TA in general suggests that American light oil could continue its recent gains over the next few days. However, significant ongoing upward movement is unlikely. The key data that might change this impression are the API’s crude stocks this evening GMT and the EIA’s tomorrow afternoon. Many traders will also be monitoring Baker Hughes’ count of oil rigs on Friday night. Each of these releases could alter the technical picture significantly if notably divergent from the consensus.

Thank you for reading Exness Education’s technical analysis of USOIL! Please tune in again on Thursday and next week for more TA  plus traders’ tips later today. Don’t forget that you can request a symbol to be covered here by commenting on social media.