USOIL has extended its gains so far today GMT. Better than expected manufacturing PMI from China early in the week has boosted sentiment on crude, and last night’s weekly stocks from the API indicated a drop of about 8.2 million barrels. The latter was the best figure for six months. Markets in general seem to be positive about the likelihood of a vaccine for covid-19 arriving within a few months despite the fact that the number of infections continues to increase, particularly in the USA. This technical analysis of USOIL looks at the four-hour chart combined with futures.

High resistance here is the latest high around $41.70. This timeframe’s low support meanwhile is the depth of the latest retracement around the psychological area of $35. There will probably be several closer areas of importance before the latter is tested, though.

Moving averages continue to print a strong buy signal. Much like the situation for Brent, the 50 SMA here has extended further away from the 100 over the last few days. The 50 SMA from Bands might be a short-term support over the next few days, but the key area from moving averages is more likely to be the 100 which is currently around $38.60.

There’s no indication of overbought at the time of writing, with price close to neutral based on Bollinger Bands (50, 0, 2). The slow stochastic (15, 5, 5) though at 70 is significantly closer to overbought than neutral. Bands have shrunk somewhat this week, suggesting that lower volatility could continue next week as well if there’s no major change in sentiment. The spike in buying volume late last night GMT was some of the highest four-hour buying demand for this symbol since April, so there is a possibility of more gains based on this if it reflects the broader market.

Price action over the last few periods has been pretty unremarkable. The long-tailed Doji from noon GMT yesterday suggests that sellers are still being overwhelmed by buying demand. Today started with a small engulfing pattern and based on the current follow up there might be three soldiers, usually considered a strong buy signal in the context. The completion of the current period would need to be awaited for confirmation.

The Fibonacci fan here is based on realised gains from late April to early June on the daily chart. The 38.2% might function as a resistance over the next few days given recent reluctance to retest highs. Meanwhile the 50% area could be an important support next week in the event of a relatively deep retracement. 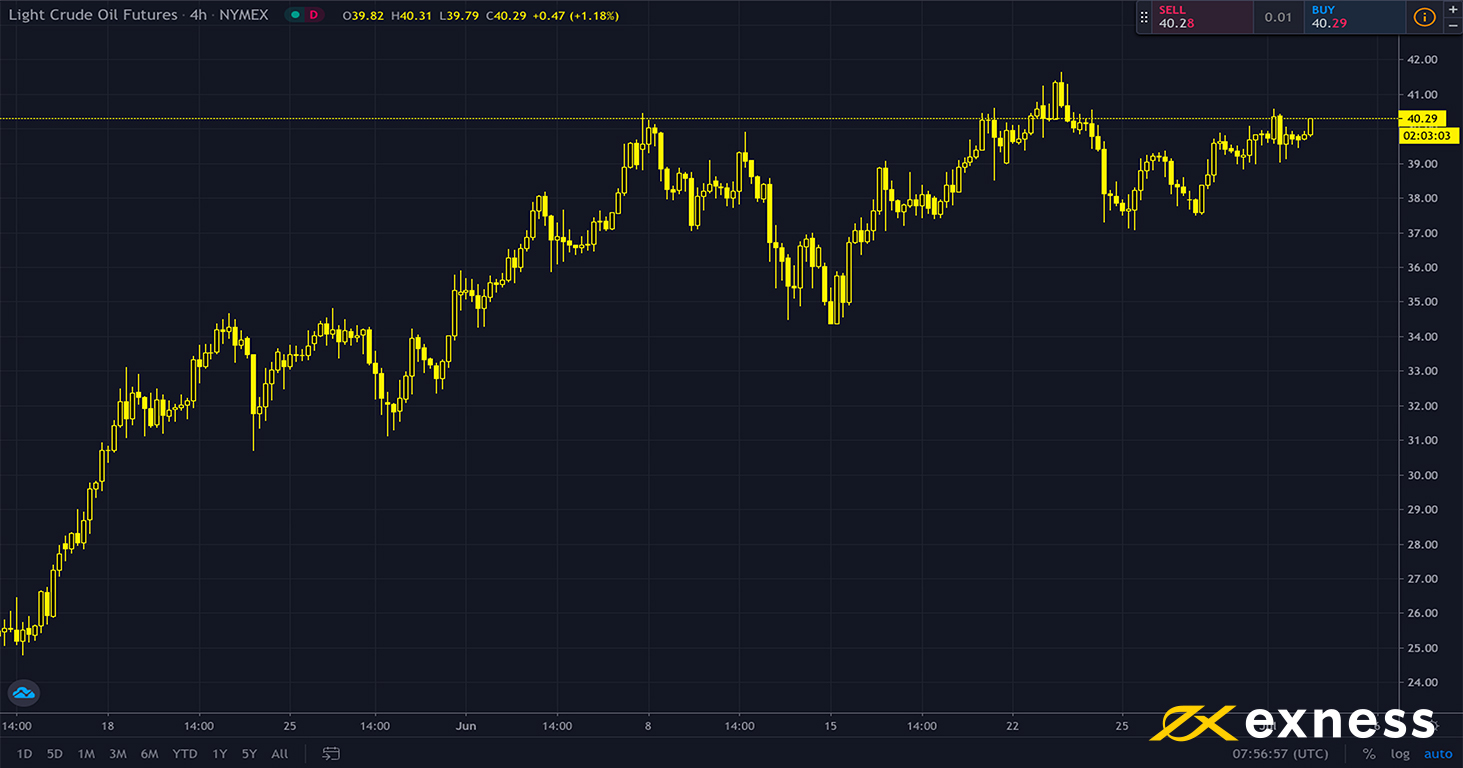 This chart of NYMEX’s futures on USOIL (continuous with current contract at front) displays basically the same movements as Exness’ spot CFD on the commodity. Gains look bigger on the left because futures unlike CFDs traded very low at the end of May and negative before that. The contango also does not give a clear signal: 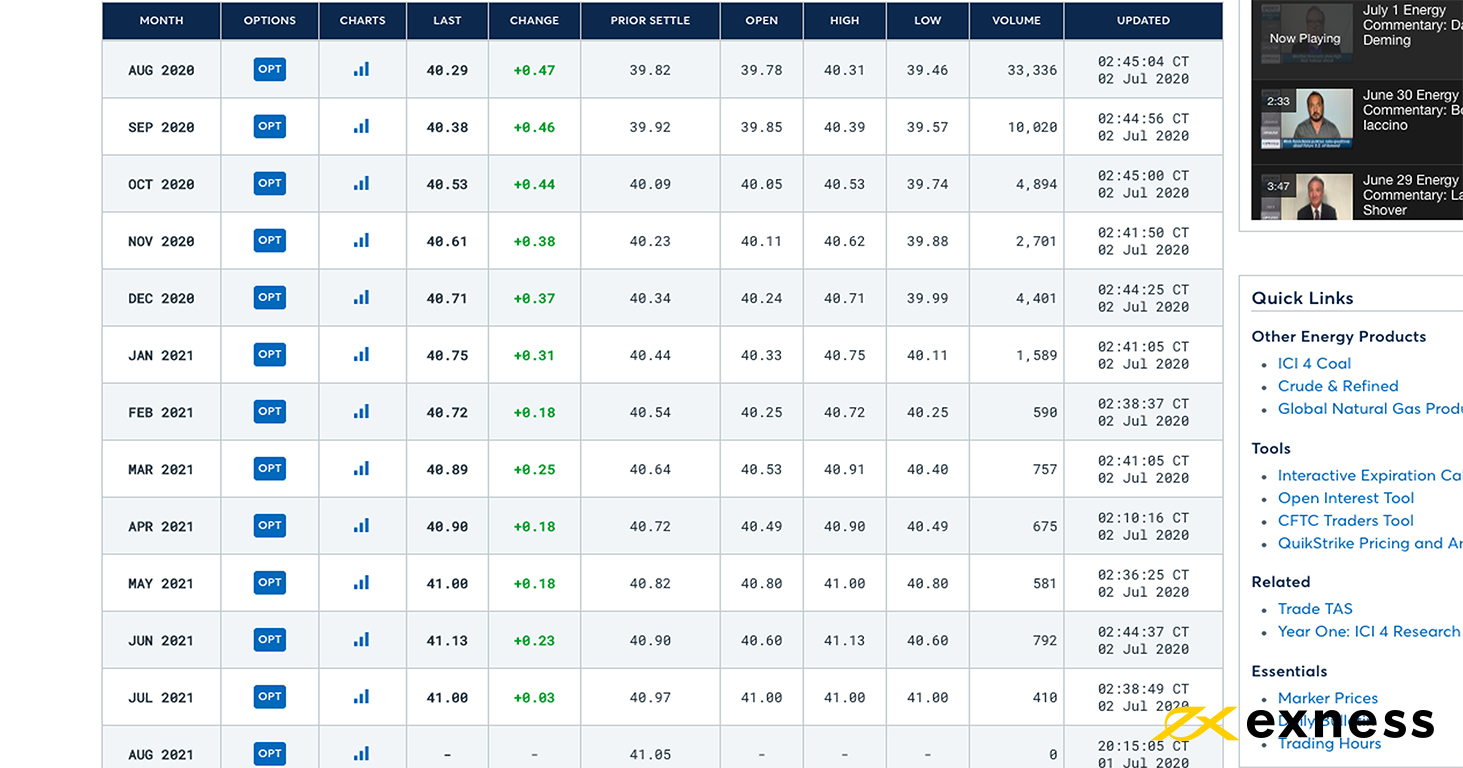 The negligible annual contango (less than 2%) is one of the lowest in 2020 so far. This seems to support the impression from the charts of the CFD and futures that volatility could be lower over the next few days and that there might be an extended consolidation.

Overall TA suggests a lack of clear direction for USOIL over the next few days with short-term, small movements in both directions. That said, traders should monitor this afternoon’s data from the EIA on crude stocks at 14.30 GMT.

A surprising result, especially a gain in stocks against expectations for a drop of about 7 million, could provoke high volatility for oil at least over the next few periods from the data. Traders also need to remember that fundamentals and sentiment in most markets are still quite fragile: a new phase of panic over covid-19 might render the technical picture invalid.

Thank you for reading Exness Education’s technical analysis of USOIL! Please join us again on Monday for our weekly preview of data. Don’t forget that you can ask us to write about a symbol here by leaving a comment on Facebook.