American light oil has declined fairly sharply so far this week partially as a result of the spike in cases of covid-19 in various countries and the resultant tightening of measures in many of these. Adding to the fundamental pressure on the commodity are reports of a ‘permanent ceasefire’ in Libya and the end of the Libyan National Army’s blockade of exports, which would be likely to lead to a significant uptick in supply. Libyan production is expected to increase to about a million barrels per day by the end of the week. Today’s technical analysis of USOIL looks at the four-hour chart compared with futures and annual futures.

High resistance on this chart is the latest swing high just below $41.90, although $42 would probably be a strong psychological area immediately above this if there’s a sudden bounce. Low support is September’s low very slightly below $37.

Moving averages are somewhat mixed, with the 50, 100 and 200 SMAs still successively above each other although also above the price as of Friday night. However, the 50 SMA is in the process of death crossing the 100. The immediate resistance from moving averages is the 200 SMA around $39.90.

The slow stochastic (15, 5, 5), currently at 17, has consistently displayed oversold since yesterday morning and has not yet completed a clear upward crossover. The main line is only slightly above the signal line within the zone of selling saturation. On the other hand, there is no longer an oversold signal from Bollinger Bands (50, 0, 2) as of 4.00 GMT today. Volume has been fairly thin so far this week, but the large green bar from noon GMT yesterday could suggest ‘buying the dip’.

There has been a clear breakout to the downside from the rising wedge that had formed throughout October. Traditionally, this would be a strong signal to sell if the weakness was confirmed with a target around the lowest extent of the pattern near $37. However, today’s bounce might indicate reluctance to push lower.

Furthermore, the 23.6% daily Fibonacci retracement area appears to be a noteworthy area of support that might resist another test. If there’s a clear break below this, the downside does seem to be favourable over the next few days. If not, a bounce to the 38.2% zone seems likely sooner or later. 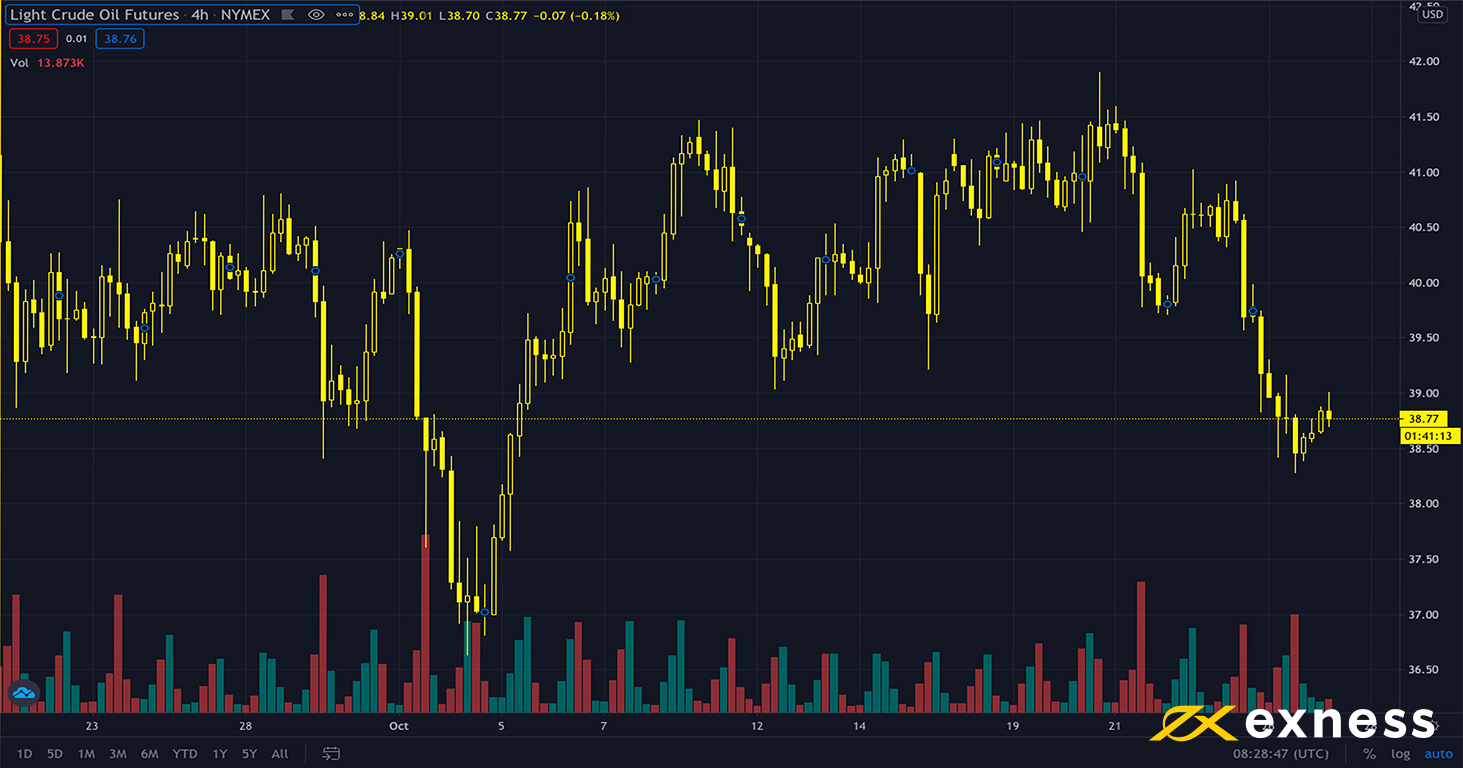 This chart of futures on USOIL (NYMEX, continuous with current contract at front) displays a similar picture to the spot CFD. We can see fairly strong losses since Friday night and a limited bounce so far today.

The main difference here is that selling volume is much higher than for the spot CFD on USOIL. This means that signals from volume on the CFD’s chart should probably be ignored and traders might prepare for more losses. 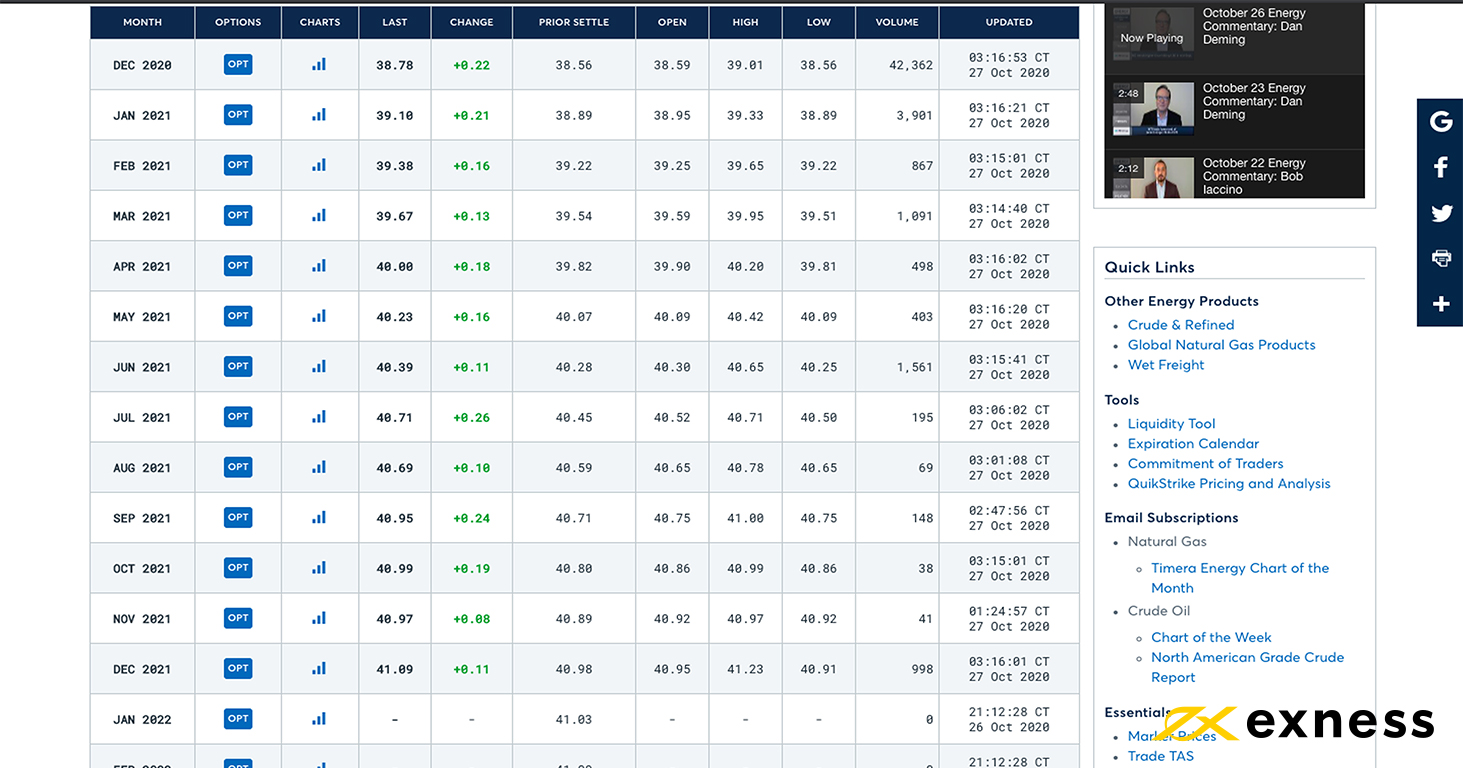 Annual futures on American light oil show a basically normal situation, with recent spot losses having been priced in. The annual contango (December 2020-December 2021) is now nearly 10%, not at all unusual for oil but still a bit higher than the 4-6% that has been common over the last few weeks.

We can adumbrate that this could be a result of most participants expecting a win by Joe Biden next week and consequently a weaker dollar in the medium term. However, as of now there is no very clear signal from annual futures.

Overall, the technical picture for American light oil is negative and more losses seem to be favourable in the runup to next week’s elections in the USA. The extent of these would probably depend on how price interacts with the 23.6% daily Fibonacci retracement area and the possible psychological support around $38. In the context of the upcoming elections, the API and EIA’s regular stock data this week probably won’t have much impact; however, they could still drive a short-term uptick in volatility.

Exness Education reminds traders that trading during major political events is significantly riskier than at other times. If you’ve never traded around important elections before, you might consider practising first on your demo account or at least reducing the volume you trade.

Thank you for reading Exness Education’s technical analysis of USOIL! Please join us again on Thursday for analysis of BTCUSD. Don’t forget that you can ask us to write about a symbol here by leaving a comment on Facebook.