American light oil appears to have resumed its downtrend since the beginning of this week, with price retreating fairly sharply from the key psychological area of $20 amid lower volume and pressure on futures. Click on the image to magnify. Today’s technical analysis of USOIL compares the charts of spot CFDs on crude oil with information from futures.

The most important low support on this chart is the key psychological area of $10. This zone was tested in the middle of last week without success. High resistance is probably $30, although there are likely to be several important barriers to higher movement before this relatively distant area is tested again.

Moving averages print a strong sell signal, with each of the 50, 100 and 200 SMAs successively below each other. The 50 SMA from Bands completed a death cross of the 100 last Tuesday. The first important resistance from MAs is the area of the 50 SMA which has just moved below $20. Above this, the ‘value area’ between the 100 and 200 MAs has shrunk considerably and might be a crucial resistance for any deeper upward retracement.

Although Bollinger Bands (50, 0, 2) no longer indicate oversold, the slow stochastic at less than 10 is close to the maximum oversold reading. Volume meanwhile remains very low compared with most of April. This would suggest that there is little impetus for a further sharp downward movement anytime soon, but traders should be aware that such a movement could be driven mainly by short-term orders.

Price action around $20 on Thursday and Friday with a number of dojis and near-dojis seems to confirm this area’s importance as a resistance. The first three candles of this week proper form a classic three black crows, which in themselves would usually signal ongoing losses.

Here the Fibonacci fan has been drawn based on the daily charts from January’s highs to the previous low in mid-March. The test of the 38.2% area in the first half of April seems to have failed decisively in the second half of this month, but this zone could still function as a resistance in the event of a significant retracement to the upside.

Comparison with futures on crude oil 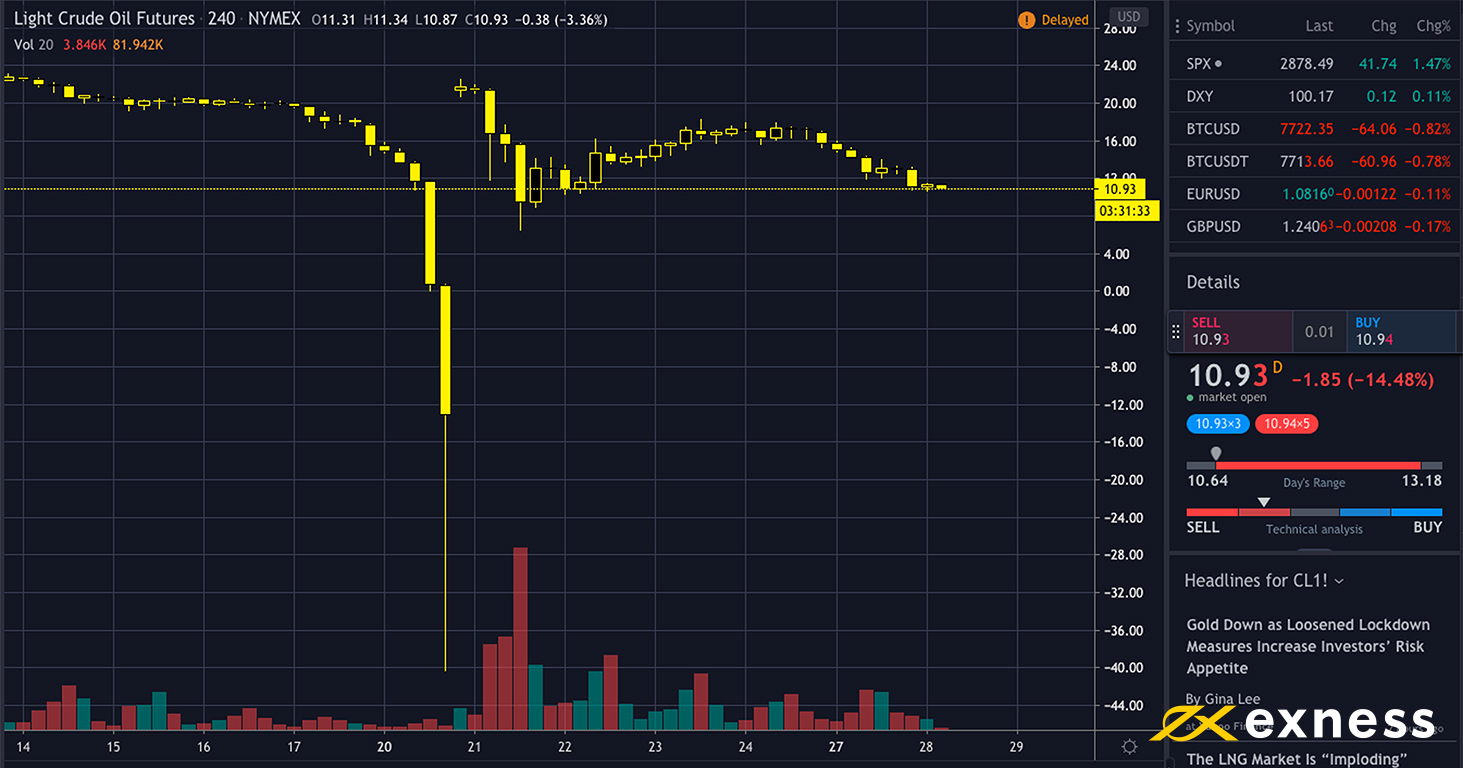 This chart of futures on crude oil (NYMEX; continuous with current contract in front) displays the sharp divergence in price from spot CFDs on crude oil. Click on the image to magnify. One can observe the dramatic losses into negative territory at the expiry of May’s contract and the large gap back into positive which followed.

Signals from this for traders of spot CFDs on crude are unclear at the time of writing. So far, there has been much lower volume for the current contract (perhaps understandably) with much weaker momentum to the downside. Having said that, it’s reasonable not to expect much of a signal from June’s contract until expiry approaches in three weeks’ time. It remains possible that a similar situation of negative prices could develop in late May. 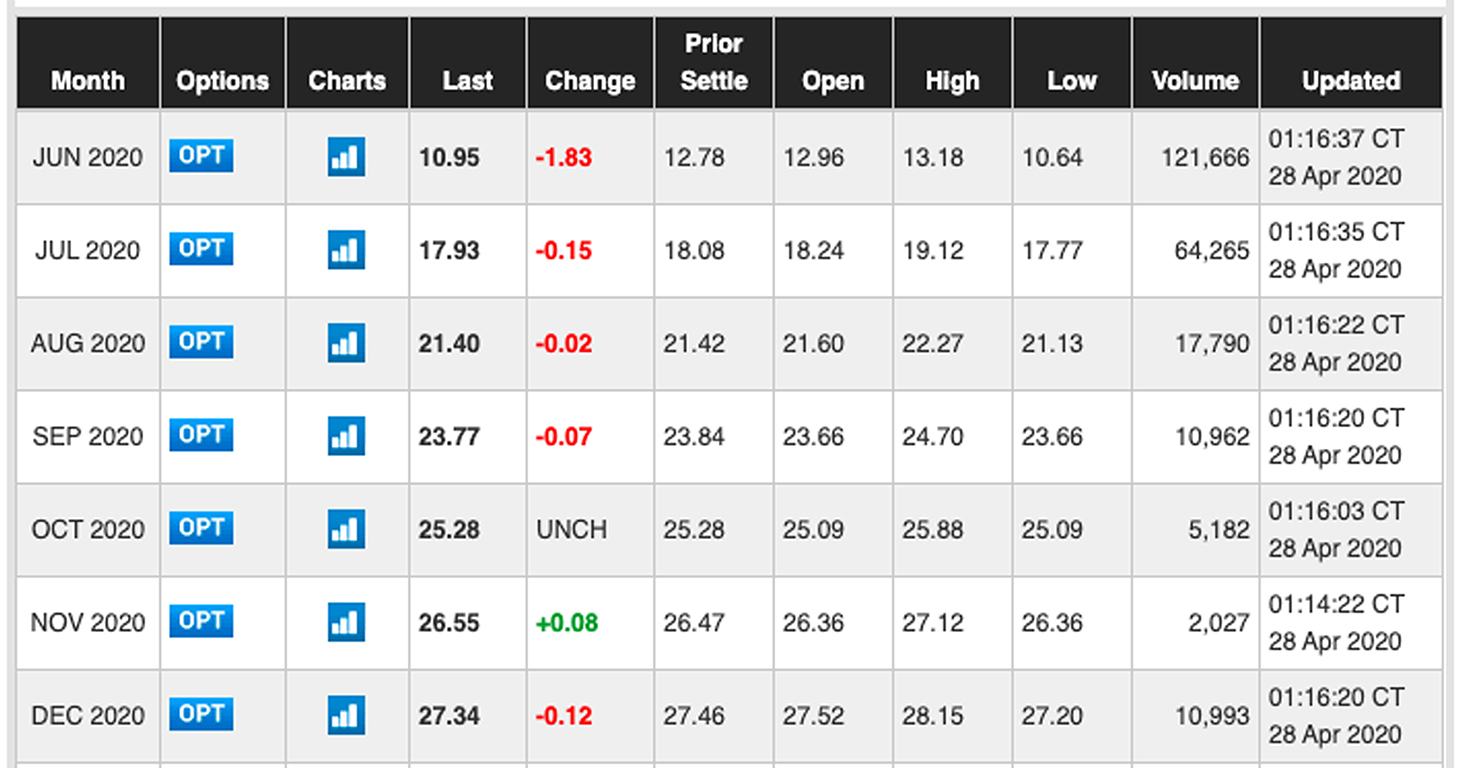 Futures for the rest of the year with the deep contango suggest that participants in the market for crude oil expect a degree of recovery over the summer, although not an especially rapid one. Click on the image to magnify. December’s contract at $27.34 this morning is nearly triple the price of June’s. This is basically in line with the expectation that most major economies will start to recover from the immediate effects of covid-19 and start easing their lockdowns within the next two months approximately.

While futures can give traders of spot CFDs valuable information, one should be careful not to ignore the fact that spot USOIL’s price is derived from a variety of sources and often diverges significantly from that of the equivalent month’s futures. It’s as important to monitor regular stock data – see yesteday’s post – rig counts and geopolitical events, plus of course the latest news of the coronavirus.

The overall technical picture for spot CFDs on crude oil is very negative at the moment, with a retest of the latest lows favourable sooner or later. Futures though might give longer term traders a degree of positivity. The big question for this latter group is whether another crash into negative prices will occur for June’s futures; as of now, it’s too early to call this with any reliability, so short-term money will probably continue to dominate the oil market over the next few weeks.

Thank you for reading Exness Education’s technical analysis of USOIL! Please check back on Thursday and next week for more analysis of the most active symbols, and don’t forget that you can request a symbol to be covered here by commenting on social media.