American light oil has continued to make gains this week, reaching three-month highs as demand starts to recover in China. Click on the image to magnify. China is now at around 90% of pre-crisis levels of demand; this morning’s Caixin service PMI at 55 was also a 10-year high, indicating a return to relatively good growth in the circumstances for the main chunk of China’s economy. Today’s technical analysis of USOIL takes a closer look at the daily charts compared with futures on crude and the current contango.

The most important high resistance on this daily chart is probably the psychological area around $50. Low support meanwhile is around $10, the low that occurred as futures turned negative in late April. Both of these areas are quite distant from the current price, so closer zones will probably be more important in the near future.

Moving averages still print a sell signal on this high timeframe with each of the 50, 100 and 200 SMAs printing below slower ones. On the other hand, it appears that price has now broken through the 100 SMA, so this upward movement seems to have considerable strength.

The main support in the near term from moving averages is the 100, currently around $32.50. Below this, the 50 SMA from Bands might be the source of a bounce in the event of a deeper retracement. To the upside it’ll probably be a while before the 200 SMA around $45 is tested.

Bollinger Bands (50, 0, 2) have started to point upward and expand again since early May, although as yet there’s no indication of a return to March and April’s exceptional volatility. The slow stochastic (15, 5, 5) unlike Bands prints an overbought signal, and a strong one at that with %D at 95.

The stochastic is somewhat less useful here than it is for currencies and other instruments – compare the very long phases of oversold in January-February and again in March as prices continued to fall. It should still be monitored by traders, though, especially if Bands also start showing overbought.

Volume has been lower in June so far compared with the average last month. This in itself might just reflect many traders waiting until after OPEC+’s meeting tomorrow before committing themselves.

The candles around the 100 SMA over the last fortnight confirmed this area’s importance as a resistance, but now that price has moved above, it’s likely to become a support. The interrupted three soldiers in mid-May was indeed followed through eventually, so depending on the news tomorrow short-term traders might attempt to exploit more gains in a similar sort of pattern then.

The first key challenge for the bulls from Fibonacci is the 50% retracement. This zone coincides with psychological resistance around $40. Above this, the 61.8% close to the 200 SMA will probably be a crucial area if gains continue over the next few weeks. To the downside, 38.2% in confluence with the 100 SMA strengthens this area as a support. 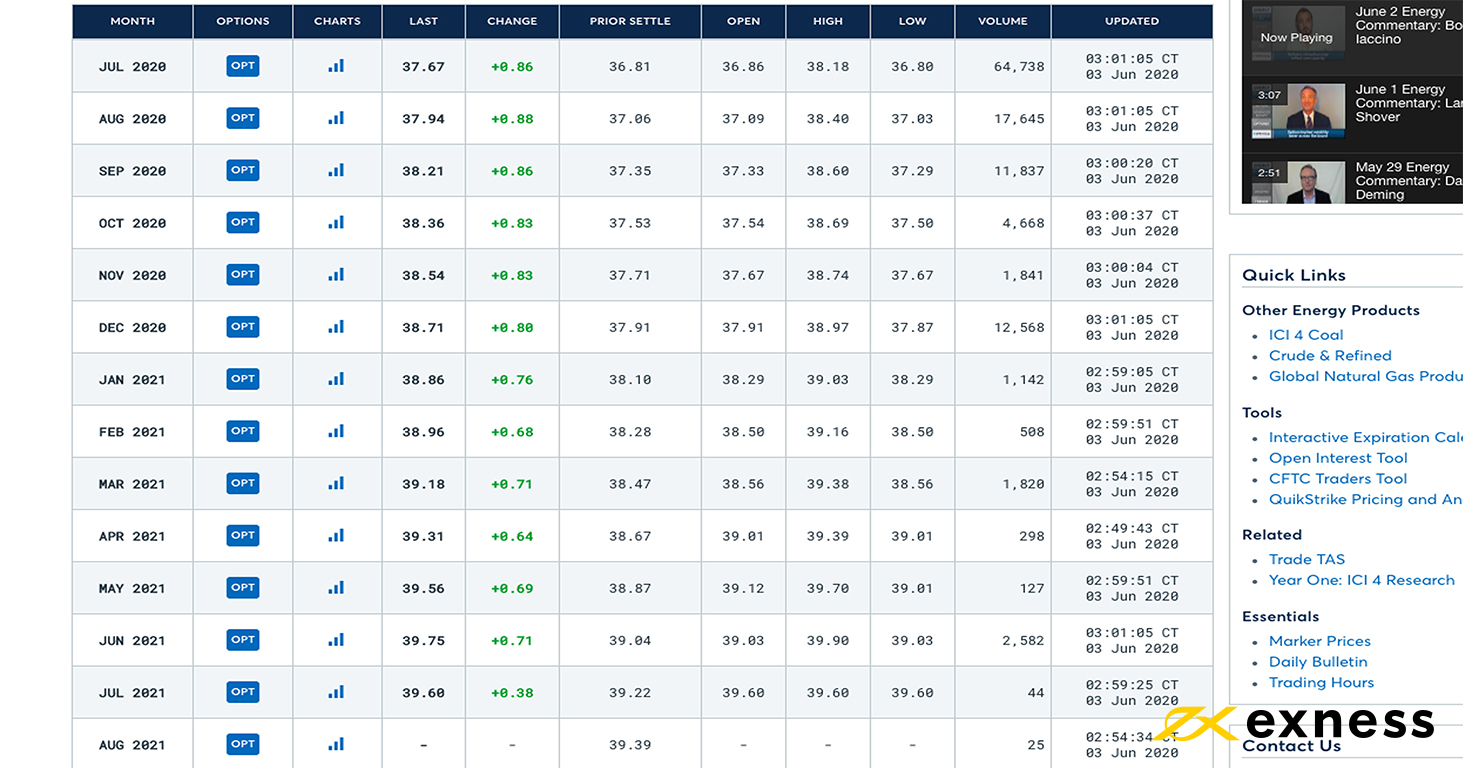 A summary of futures from the NYMEX for the next year indicates basically a normal situation. Click on the image to magnify. The annual difference is now less than 10%, a sharp contrast with the 250% that had been seen early last month. Steadily pricier futures suggest that ongoing small gains could be expected in the longer term for USOIL. 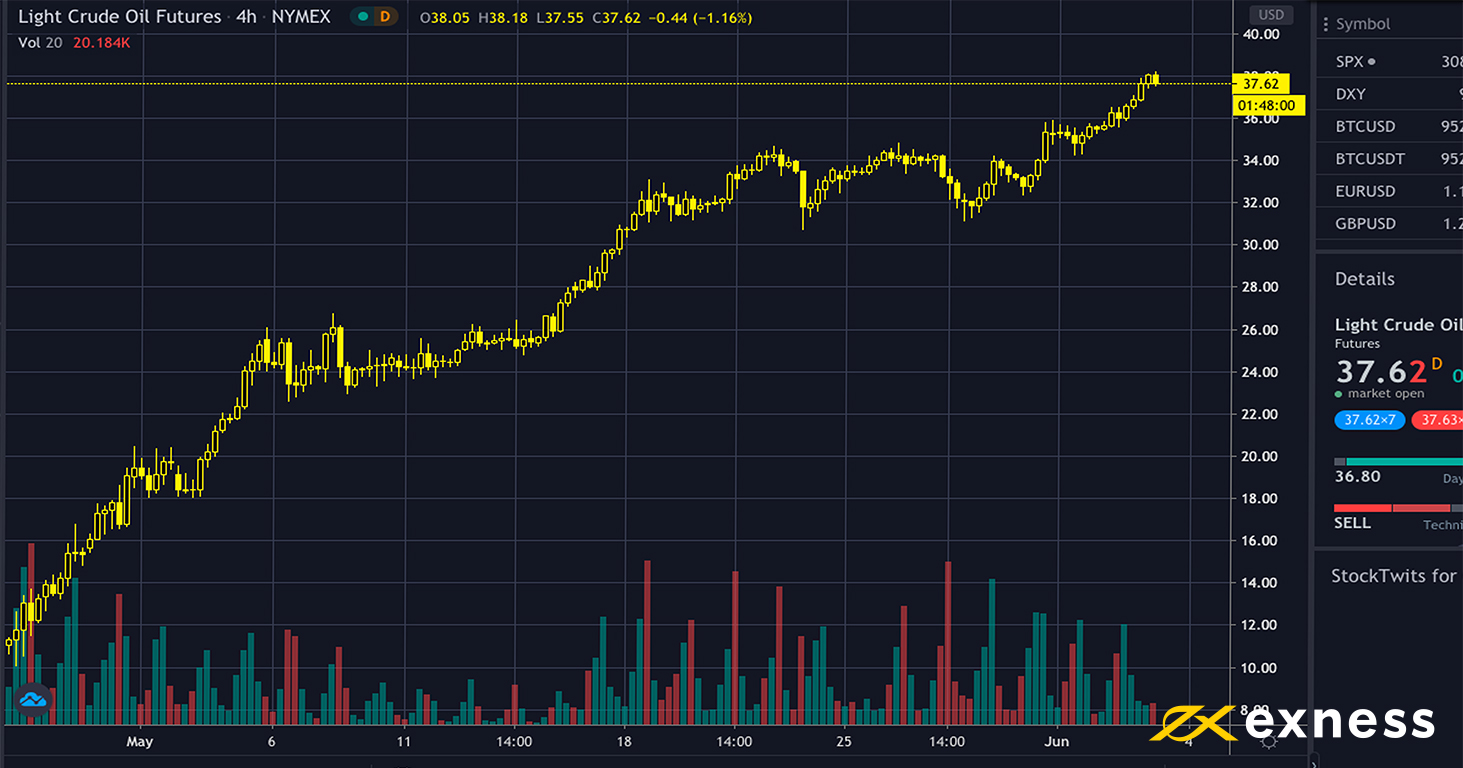 This shorter H4 chart of futures on American light oil (NYMEX; continuous with current contract at the front) mirrors what we’ve seen for spot CFDs on USOIL fairly closely. Click on the image to magnify. The crucial difference is that here volume remains very high, with some of the highest buying volume so far this year at the end of May. This seems to suggest that the current upward movement will continue to be strong.

OPEC+ is due to meet tomorrow to decide whether to extend the current cuts due to expire at the end of the month. An extension until September seems to be likely, so this outcome has probably been priced in already.

Failure to agree or signs of a return to tension between Russia and Saudi Arabia would probably be very negative for oil. This doesn’t seem to be a likely situation, though: neither country wants to see negative prices again and the former is still struggling to tackle covid-19.

Apart from the central event of OPEC+’s meeting, traders will also be monitoring regular data this week, primarily Baker Hughes’ rig count and the EIA’s data on stock. API crude stocks dropped around half a million barrels last night, so a possible but unlikely drop in the EIA’s release this afternoon GMT could spur crude higher in the short term.

The general technical picture for oil suggests ongoing gains. Traders will be monitoring fundamental events closely tomorrow, but assuming no major surprises the focus will turn back to price’s behaviour around important resistances sooner or later. Saturation might become a bigger concern over the next few days if gains continue, so Bands and the stochastic on the daily chart of USOIL will probably remain in view.

Thank you for reading Exness Education’s technical analysis of USOIL! Join us again next week for more analysis of the most active symbols. You can also request a symbol to be covered here by commenting on social media.