USOIL’s recent upward retracement has deepened so far this week. Click on the image to magnify. Price has moved back above the key psychological area of $20. Among the important fundamental developments are moves by various countries to ease their lockdowns and a reduction of supply, both voluntarily among OPEC+ and by necessity in the USA due to low prices. Today’s technical analysis of USOIL looks at some areas from moving averages and Fibonacci which might be important over the coming days.

The most important high resistance on this timeframe is likely to be early April’s highs around $30. Low support is the area of the recent lows around $10. It’s likely that both of these areas will remain strong and provoke bounces unless there is a significant change in the tone of fundamental events this week.

Moving averages themselves continue to print a sell signal at the time of writing, with the 50, 100 and 200 SMAs successively below each other. However, price has now moved clearly above all three of these lines. The question remains whether a consolidation might occur above the 200 SMA. If not, the first support would probably be the 100 SMA which is currently around $21.

Volumes remain very low for both buying and selling compared with readings earlier in April. On the other hand, the slow stochastic (15, 5, 5) and Bollinger Bands (50, 0, 2) both indicate overbought. The stochastic at 94 strongly indicates overbought; this reading is close to the maximum. This suggests that it would be a significant risk to buy in here.

Recent price action is fairly consistent with a short-term upswing, with a lack of any very clear patterns of candlesticks. The current movement upward came after a double bottom in the second half of April, but the very long tail on the morning of 21 April GMT doesn’t necessarily suggest strong long-term buying pressure in itself. How price behaves during the current period around the upper deviation of Bands and the 200 SMA could be crucial.

The Fibonacci fan here remains active from the daily charts and is based on the large losses from January to mid-March’s lows. The latest test of the 38.2% area appears to have been successful for now, so it’s possible that this area could function as a support in the near future. The next target area to the upside from Fibo would be the 50%. 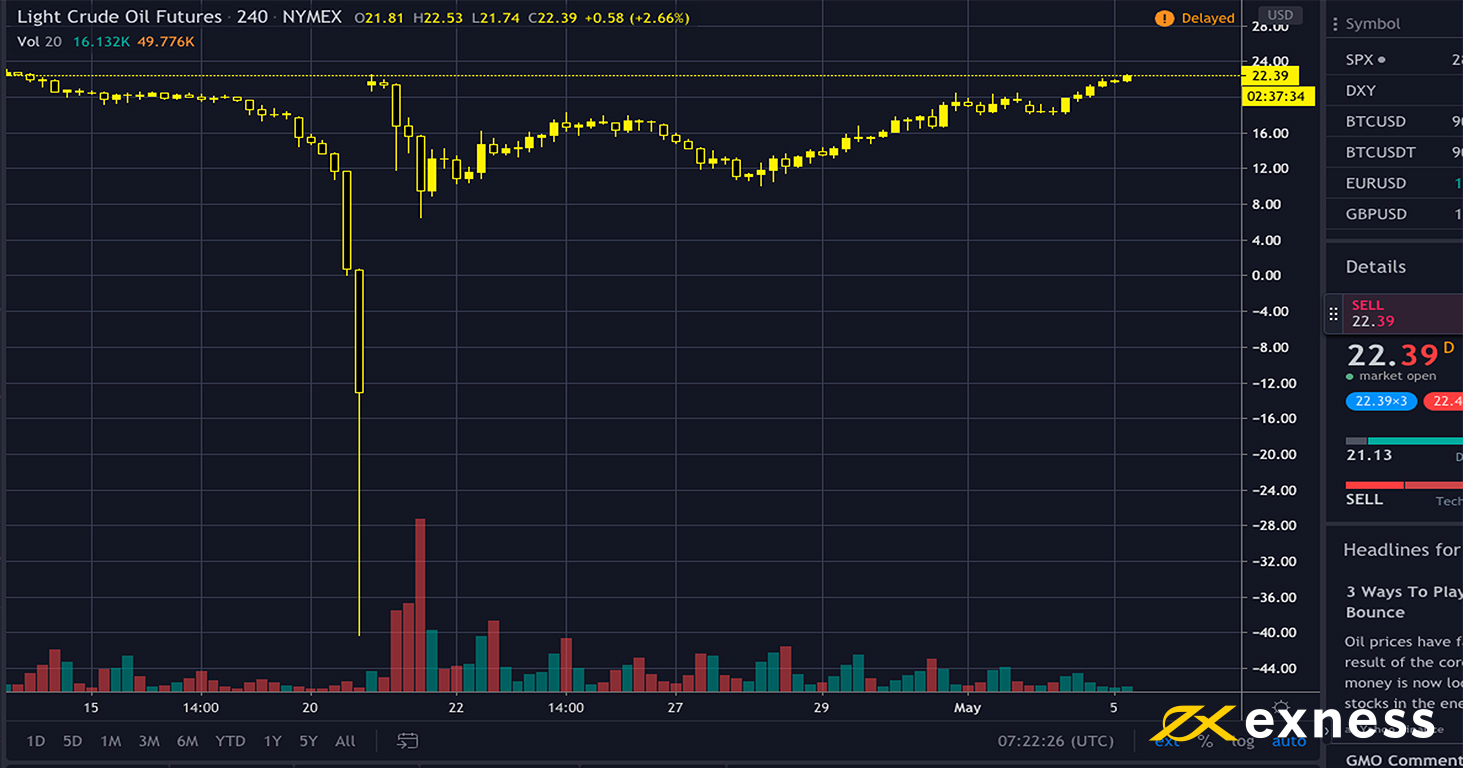 This chart of futures on crude oil (NYMEX; continuous with current contract in front) demonstrates some gains recently, reflecting those of spot CFDs on USOIL although to a lesser degree. Click on the image to magnify. Here there is no double bottom pattern over the last fortnight or so and the contrast in terms of volume is even greater between last month’s crisis and the first few days of May. A clear signal from futures is still not very likely until later this month.

The short-term outlook for USOIL seems to be fairly positive at the time of writing, with considerable strength being shown on the four-hour charts. As of now, though, there is no clear evidence that the overall downward trend is over. The continuing likelihood is the dominance of short-term money as fundamentals become more clear over the next few weeks. This known, there will probably be a number of quick opportunities in both directions this week.

Thank you for reading Exness Education’s technical analysis of USOIL! Please join us again on Thursday for more analysis of the most active symbols, and don’t forget that you can request a symbol to be covered here by commenting on social media.