USOIL has continued to consolidate upward so far this week, with an attempt to retest the latest high looking possible soon. Despite the possibility of renewed lockdowns in some countries hurting sentiment somewhat, oil has recently faced few headwinds as China’s economy appears to be on track for recovery. Crude seems to have shrugged off yesterday’s weak stock data from the EIA which indicated that storage in the USA grew by more than 5.5 million barrels against the expectation for a decline. Today’s technical analysis of USOIL looks at futures and the contango as well as the chart itself.

High resistance here might be the next important psychological area around $45. Before this, though, the latest high around $41.60 will probably function as a resistance. Low support is the other psychological area at the bottom of the chart around $35; this probably won’t be tested anytime soon but a break below $40 again could signal an ongoing consolidation and diminished likelihood of more gains next week.

Moving averages continue to print a clear buy signal, with all three of the 50, 100 and 200 SMAs successively above slower ones and below price. The 50 and 100 are the most important in the short term as supports, but in the event of weak stock data again today it’s possible that the value area between the 100 and 200-period moving averages could support price.

Bollinger Bands (50, 0, 2) have contracted slightly over the last few days but not enough to give a signal on further volatility. There’s also no sign of saturation from Bands or the slow stochastic (15, 5, 5); however, the latter at around 77 is very close to overbought. Lower volume seems to support the idea of consolidation over the next few periods, although it’s possible that some traders are waiting for the IEA’s report at 8.00 GMT tomorrow morning before committing themselves either way.

Price action has generally been uneventful recently, with no real attempt to break into a new range this week. Longer tails around $40 might confirm this psychological area’s importance as a support going forward. Equally though there’s been no sustained attempt to push past $41.

The Fibonacci fan here, drawn based on the daily charts, suggests that USOIL overextended itself in the second half of last month. Now the 38.2% zone seems to be functioning as a resistance again. Meanwhile the 50% in the area of the 200 SMA looks like a strong support from which one might expect to see a bounce in the event of a sudden wave of losses. 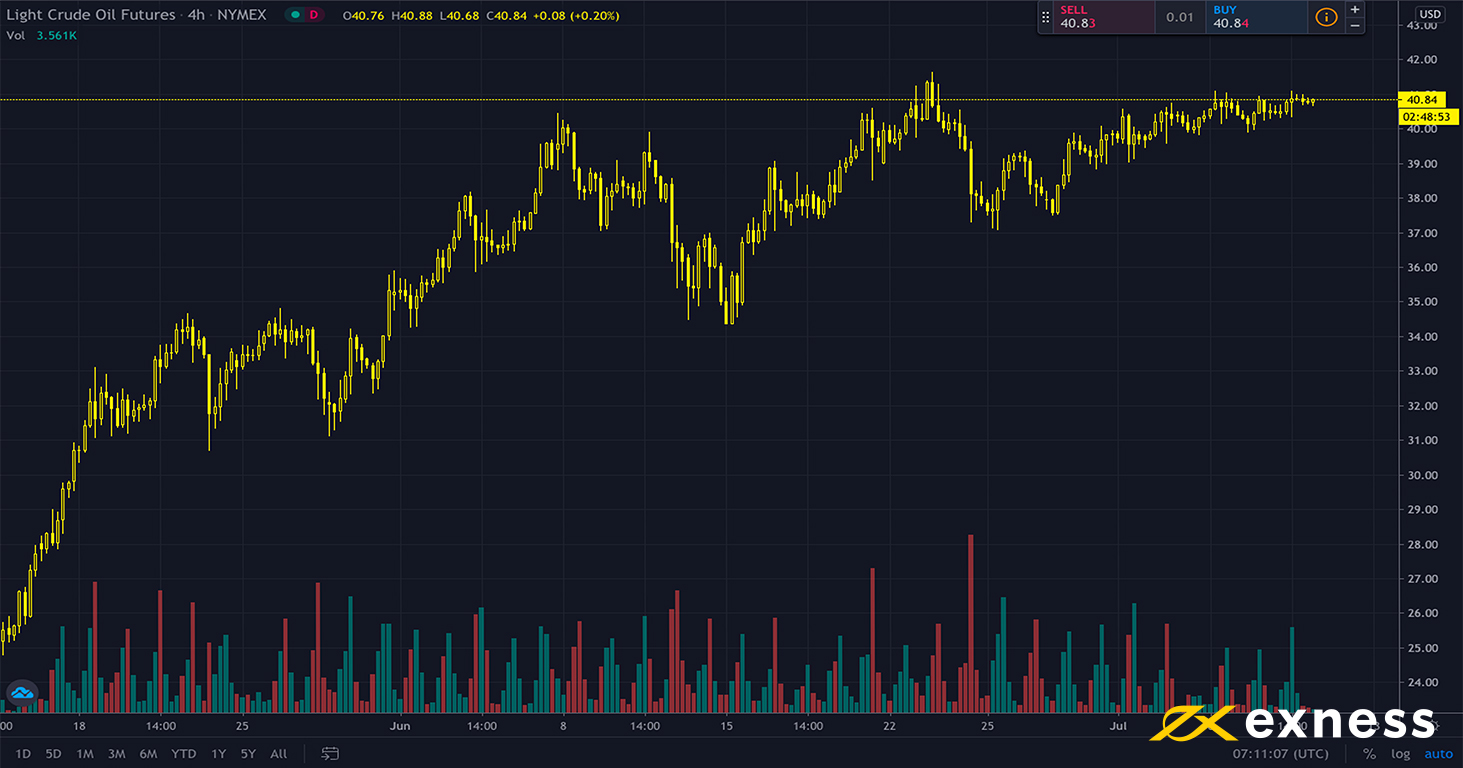 The situation for futures on USOIL (NYMEX, continuous with current contract at front) is basically similar to that for spot CFDs on the commodity. This week has been comparatively inactive considering oil’s usually volatile nature. We can also observe somewhat lower volume this week. However, the volume of buying relative to selling has remained high, suggesting that ongoing gains are expected. 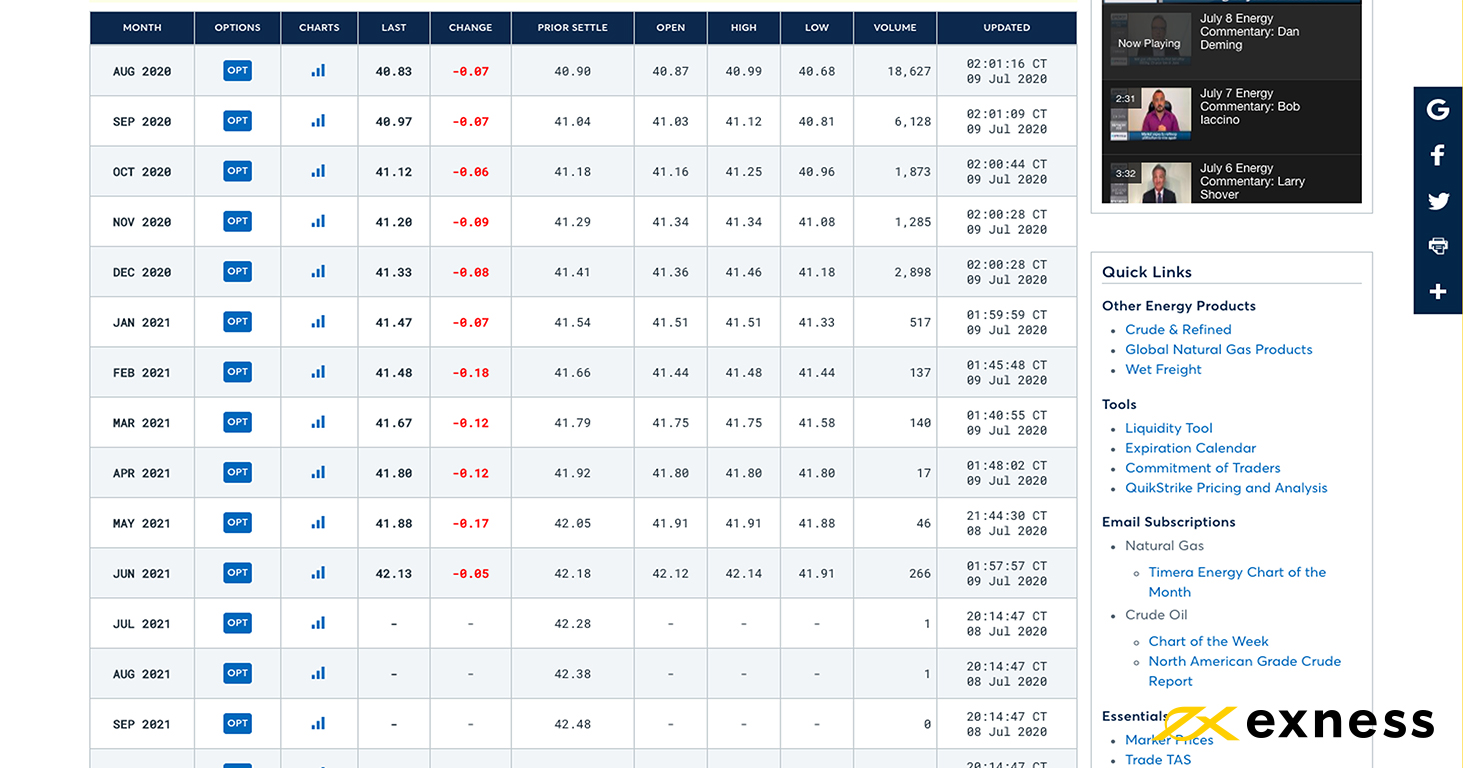 Annual futures also don’t present a divergence from what’s been seen on the CFD’s chart. The difference over 10 months is a bit less than 5%, so this fairly small contango suggests a basically ‘normal’ situation where traders and other participants expect slight, gradual increases in the price. Volume though for next year’s contracts remains low.

The technical picture generally indicates ongoing consolidation upward and possibly a test of a new three-month high. As has generally been the case since March, though, traders should be prepared for a sudden change in the fundamental situation causing a rapid movement.

Thank you for reading Exness Education’s technical analysis of USOIL! Please join us again on Monday for our weekly preview of data. Don’t forget that you can ask us to write about a symbol here by leaving a comment on Facebook.