Technical analysis of USOIL and BTC-KRW

Technical analysis of USOIL and BTC-KRW

Spot CFDs on USOIL have made sharp losses so far this week (click on the image to magnify) but the price of May’s deliverable futures on crude diverged sharply from these. The latter traded at negative prices for a period yesterday, with producers paying ‘buyers’ to take extra stocks of oil. Today’s TA looks at crude oil first and then bitcoin against the won.

Low support on the four-hour chart of USOIL is March’s low around $21. It seems favourable that price could retest this area in the near future. High resistance meanwhile is likely to be the latest high slightly above $31.

Moving averages on this timeframe give a fairly strong sell signal. Price is quite far below each of the 50, 100 and 200 SMAs, although these three are not all successively below each other. The 50 SMA actually completed a golden cross of the 100 in the first full week of April. The first resistance any retracement might face from MAs is the 100 SMA in the area of $26.

Oversold conditions continue to dominate most charts of oil, and this is no exception. Price remains outside the lower deviation of Bollinger Bands after the seventh successive close in oversold based on this measure. The slow stochastic has now moved very slightly out of oversold to 22, although the stochastic’s signal line remains in oversold at 19.

Volume has increased slightly this week but remains less than half that around OPEC+’s latest meeting. Buying interest then seemed to suggest considerable demand and activity among bulls. Traders should of course remember that Volumes for USOIL only displays data from traders using Exness’ platforms to buy and sell this particular symbol, not the whole market of CFDs on oil.

The overall signal from TA for USOIL still seems to be sell. However, it would be rash for traders to focus on TA to the exclusion of fundamentals at the moment. The temptation for many traders both of CFDs and deliverable oil to ‘buy cheaply’ is likely to be strong, so an upward retracement based on this and current selling saturation should not be ruled out. 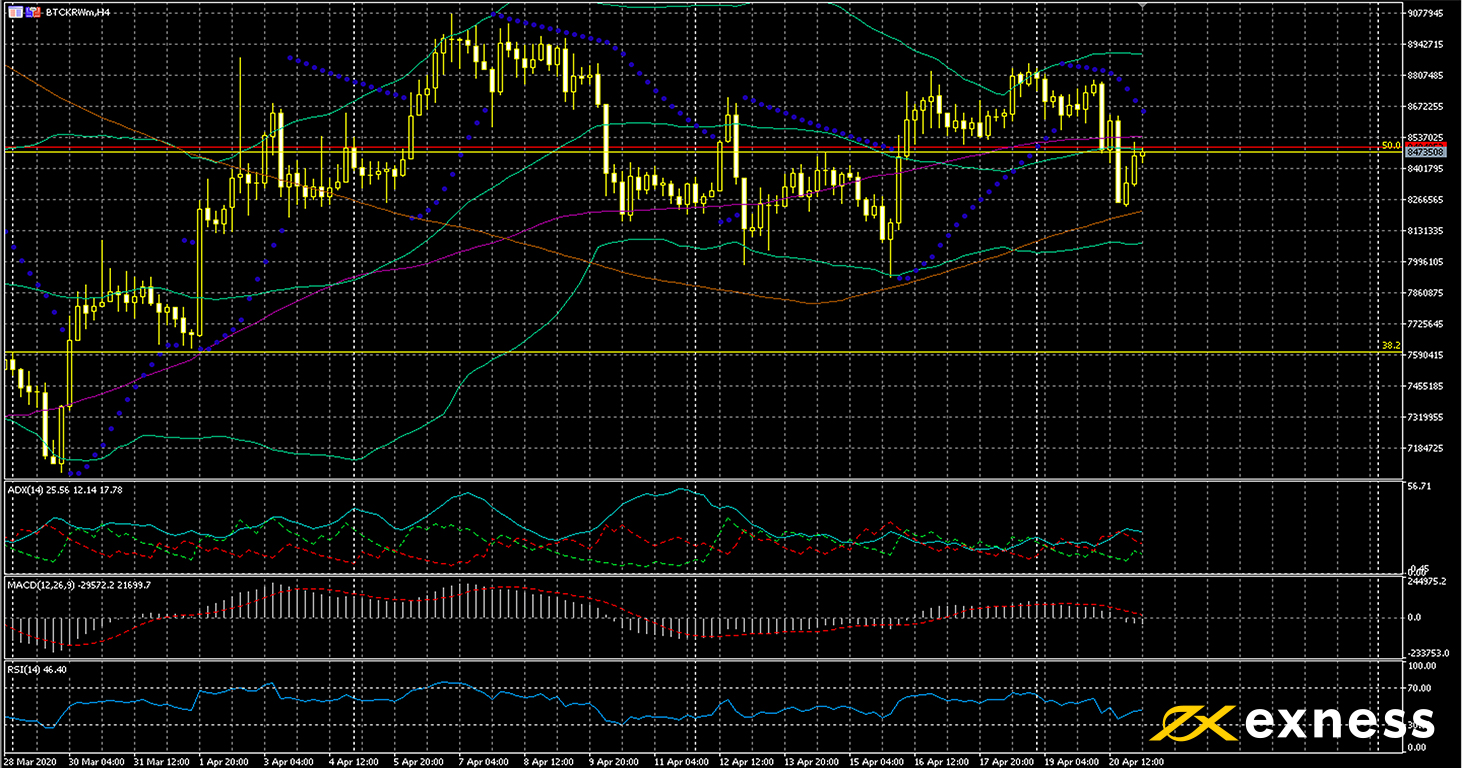 Bitcoin is still showing some strength against most fiat currencies in the second half of April so far. Click on the image to magnify. There are still signs of a degree of correlation between spot CFDs on gold and those on bitcoin; however, traders should be aware that cryptocurrencies are much more volatile than traditional havens and apparent correlations should not be trusted too much. ₩8.45 million is fairly consistent with the prices seen for most of April so far, so many traders will be trying to glean when the next upward wave might start.

High resistance on this timeframe is likely to be the 61.8% Fibonacci retracement area based on the daily charts in the region of ₩9.32 million. This is a bit above the top of this chart. Low support meanwhile appears to be the 38.2% Fibo; this seems to be a strong area from which one might expect to see a bounce if it were tested within the next couple of weeks.

Moving averages are overall unclear as to direction in the immediate future. The three lines have bunched fairly close to each other, price and the 50% Fibonacci retracement area. The presence of price within the ‘value area’ between the 100 and 200 SMAs means that trading within the current range might continue for the next few periods at least. The only clear support from MAs is the 200 SMA in the region of ₩8.25 million.

ADX prints a weak sell signal at around 25 with the -DI around 5 greater than the +DI. This signal can probably be ignored though because the index is calibrated for only 14 periods. MACD also gives a sell signal at the time of writing, with the histogram extending the gap with the signal line slightly and moving into negative territory. RSI meanwhile at 46 is very close to neutral.

Recent price action has been fairly insipid by crypto standards without any clear direction. There’s been a couple of fairly strong bounces from slightly above the 200 SMA – notably the long tail from the evening of 15 April GMT – so one can probably note this line as a support moving forward.

Price has faced challenges in extending much above the 50% Fibonacci retracement area. A clear break above this zone and a flipthrough of parabolic SAR might be the point of entry for buyers in the medium to long term.

Bitcoin is likely to resume upward movement sooner or later based on the technical picture overall. The main questions are when this might happen and what sort of target might be reasonable. On the other hand, a retest of the 200 SMA and maybe even the 38.2% Fibo is possible over the next couple of weeks.