Gold has made big gains this week, continuing its overall uptrend and moving above the key psychological area of $1,700. Click on the image to magnify. This morning’s peak around $1,724 is a seven-year high. This technical analysis of XAU–USD compares the four-hour and daily charts and considers which areas might be important in the near future.

Low support on the four-hour chart of XAU–USD is the source of the latest upward wave around $1,460. It’s unlikely that this area will be tested anytime soon, though. High resistance is less clear, but it could be the next psychological area around $1,800 (somewhat above the top of this chart).

Moving averages print a strong buy signal with all three of the 50, 100 and 200 SMAs successively above each other. The 100 SMA has recently completed a golden cross of the 200. Each of these lines could function as support and the possible limit of a retracement over the next week or so.

The slow stochastic (15, 5, 5) prints a strong overbought signal at the time of writing at 93. Bollinger Bands (50, 0, 2) are also very close to overbought, with price only recently having moved back inside the upper deviation. Volume is also very low compared with the initial stages of this upward wave. These factors together would suggest that a retracement to some degree at least is favourable over the next few periods.

Recent price action is clearly positive, with a number of large upward real bodies and generally few large wicks. The current period would clearly signal retracement if it were to form a downward engulfing pattern and possibly break parabolic SAR. However, traders should wait for completion before acting on such a signal.

The 38.2% zone of the Fibonacci fan coincides fairly closely with the 100 SMA, making that area a good candidate for the strongest immediate support on the four-hour chart. Buyers might aim to enter around this zone after any retracement loses momentum. 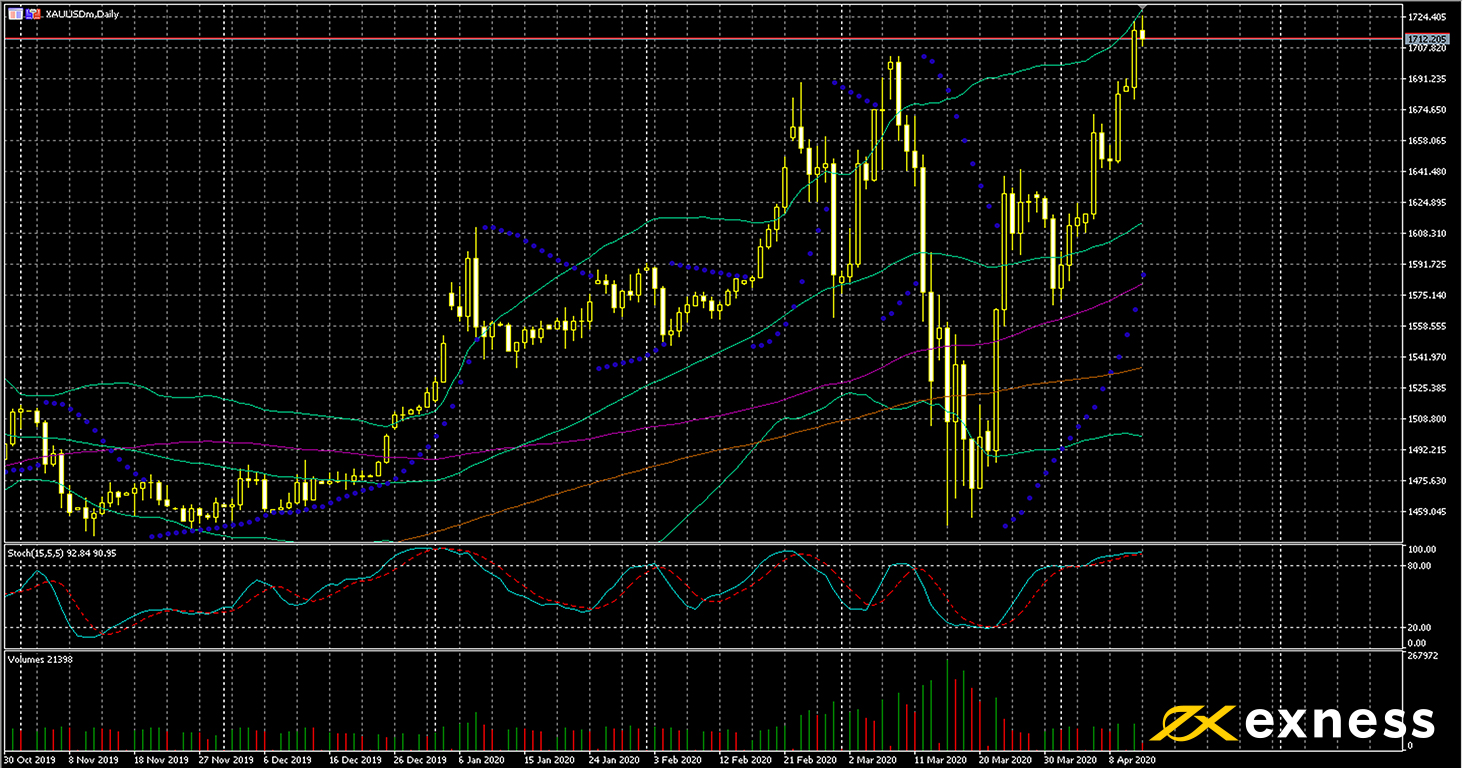 The picture from the daily charts is basically quite similar to the four-hour although we can see here that volatility has been very high. Click on the image to magnify.

The buy signal from MAs is even stronger here, but the slow stochastic is even more overbought. Immediate support is around the area of the 50 SMA from Bands, which at about $1,610 currently is the same area as the four-hour chart’s 38.2% Fibonacci fan.

Gold is likely to remain supported fundamentally by monetary stimulus, both very low rates and other measures like quantitative easing. A degree of recovery in general for shares would be a somewhat negative factor for the yellow metal.

In terms of news, covid-19 itself is certainly the key factor. If there are good indications of a peak in cases having been reached in some of the worst-hit countries like the USA, XAU–USD might retreat somewhat. Politicians’ comments and reactions to the virus, particularly fiscal policy, bailouts and so on, are also likely to be crucial over the next few weeks. Various European countries like Germany and Italy are reported to be planning to ease their lockdowns.

Regular economic data will probably not be very important this week. Tomorrow’s meeting of the BoC could drive some further demand if there is a cut to rates, i.e. all the way to 0% (a hold at 0.25% remains more likely). Annual GDP growth from China on Friday might also bring a degree of volatility. These aren’t expected to be important drivers for gold, though.

The general impression from TA for gold-dollar is that a retracement is favourable sooner or later. Current conditions of overbought and relatively low volume make it risky to buy in now. Waiting and observing behaviour around the 50 and 100 SMAs on the four-hour charts could make for a less risky trade than buying in at what could be the very top.