Gold has continued to consolidate this week around the crucial psychological area of $1,800. Among the key factors supporting gold are expectations of a ‘wait and see’ approach in the eurozone, with the ECB expected not to announce further stimulus at its meeting this afternoon. Sino-American tension over Hong Kong and the control of advanced technologies has also dented sentiment on shares somewhat this week. The environment generally remains favourable for gold given that all major central banks have cut their rates close to zero. This technical analysis of XAUUSD looks at the longer daily chart.

The only clear resistance here is the all-time high just below $1,820 reached in August 2011. Low support on this daily chart is a bit clearer though around $1,470, but this area is very unlikely to be tested anytime soon. Later retracements during the current uptrend are more likely to be in view as supports.

Moving averages continue to print a strong buy signal with each of the 50, 100 and 200 SMAs successively above each other and below price. The 100 SMA has extended above the 200 over the last few days but the space between the 50 SMA from Bands and the 100 has decreased slightly, suggesting a decline in momentum upward. The main area of focus as a support from moving averages is the 50 SMA around $1,750.50 – this could be the source of a bounce in the event of a relatively deep retracement.

Price isn’t quite overbought at the moment based on Bollinger Bands (50, 0, 2), but the slow stochastic at nearly 82 is within the zone of buying saturation. Volume recently has remained consistent with the averages in May and June.

Recent price action suggests that buying pressure remains strong, with few down periods having significant bodies. As up bodies have also shrunk and wicks are increasingly prevalent during up candles, we can see that momentum has been weaker so far this month.

The Fibonacci fan here is based on the initial phases of the uptrend which took gold from March’s low to around $1,760. The 38.2% area could be another resistance if price makes an all-time high in the near future. Equally the 50% zone is in focus as a support before a test of the 50 SMA from Bands might be attempted. 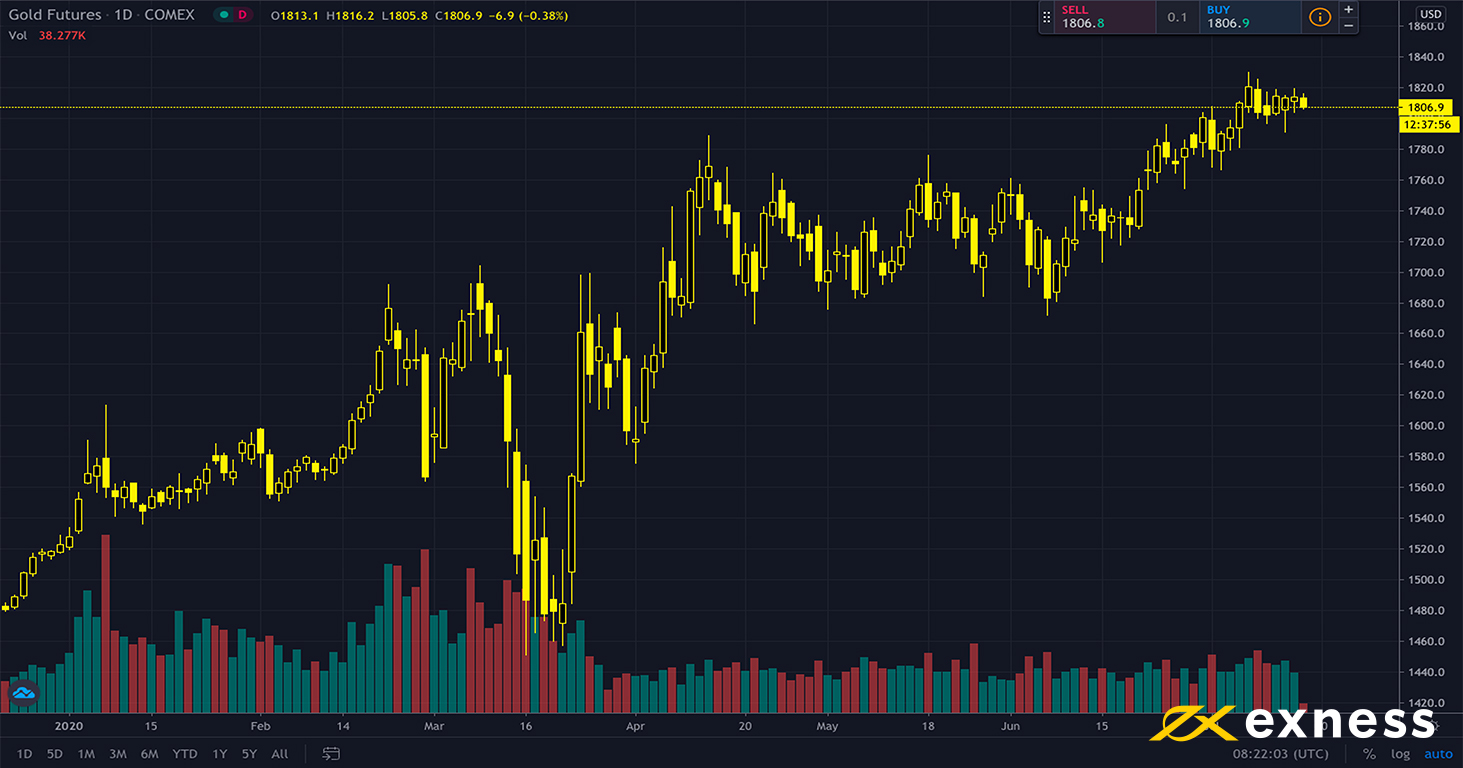 The picture from futures (COMEX, continuous with current contract at front) is basically similar to that for Exness’ spot CFD on XAUUSD. The price of the futures is very slightly higher and we can observe a bit more volatility over the last couple of weeks. Volume though has remained basically similar since April. There isn’t a clear signal here, but any upcoming retracement might develop more quickly on this chart compared with the CFD. 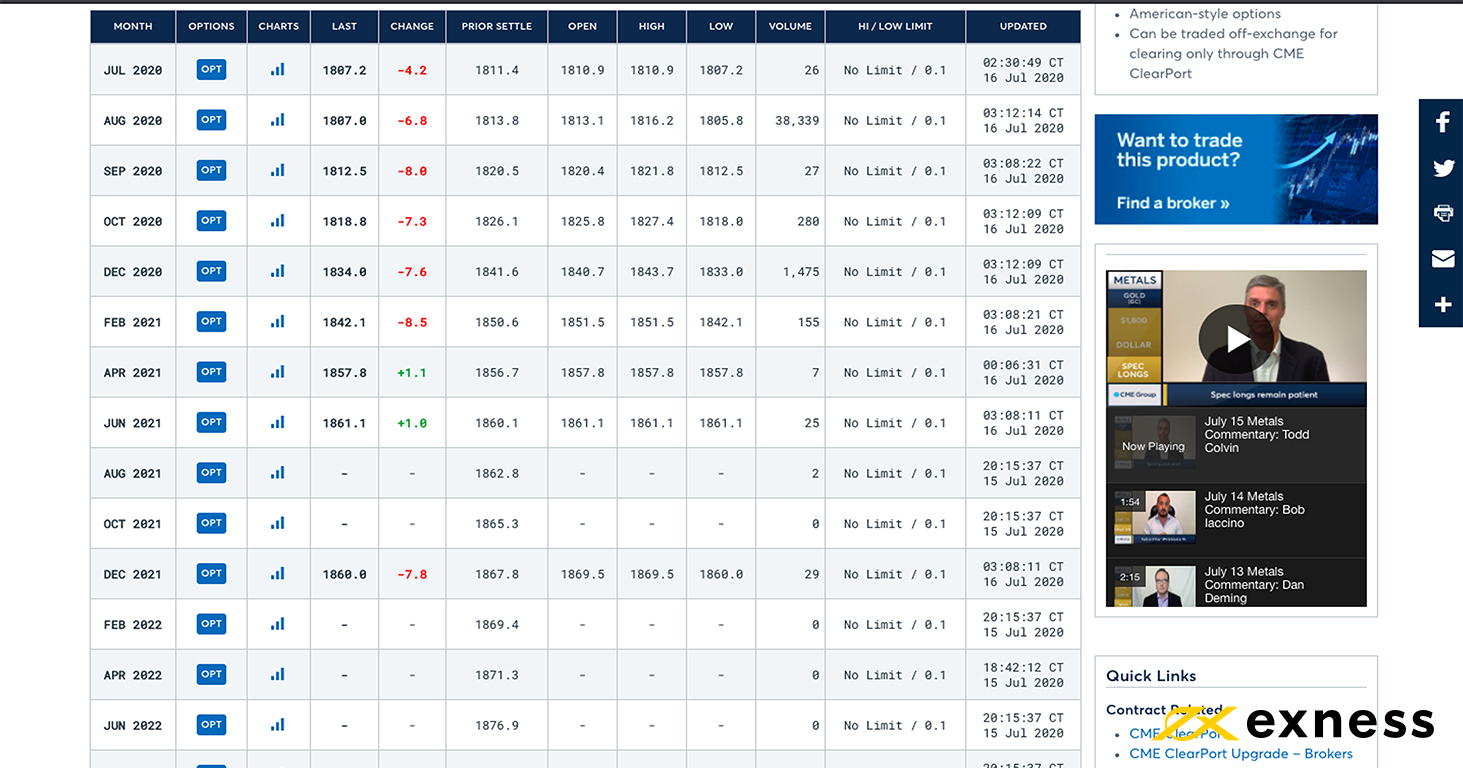 The 11-month contango currently stands at about 3%, which as earlier in the week is basically a ‘normal’ situation. A slightly shrinking contango can be expected as momentum for spot gold has decreased recently.

The only contracts here with volume over 1,000 though are next month’s and December 2020. The lower value for December 2021 can probably be ignored given volume of only 29, plus 18 months is a long time away.

The technical picture for gold remains positive with a new high likely sooner or later. For most traders, though, the traditional action in this situation would be to wait for a retracement downward before buying in. This could reduce the risk of buying into strength and potentially increase reward. The meeting of the ECB this afternoon could bring some volatility on the chart even if the expectation of no change turns out to be correct.

Thank you for reading Exness Education’s technical analysis of XAUUSD! Please join us again on Monday for our weekly preview of data. Don’t forget that you can ask us to write about a symbol here by leaving a comment on Facebook.