Gold-dollar has retraced slightly from its recent high so far today. Click on the image above to magnify. Fundamentally speaking, gold’s performance over the last few weeks has been curtailed somewhat by positivity in stock markets. Even though the number of covid-19 infections around the world continues to rise rather quickly, the number of deaths is generally dropping. Today’s technical analysis of XAUUSD looks at some important areas for the next few days based on moving averages, price action and Fibonacci as well as analysing what insights might come from futures on gold.

Ongoing stimulus from the Fed and other central banks is propping up shares, with much of the new money being created going into stock markets. Despite the current environment of very low interest rates all over the world, demand for gold has stagnated as investors in the deliverable metal mostly seem to believe that economic recovery is underway. As yet, though, there is no clear indication of how the apparent recovery will play out.

Looking at the chart, the most important high resistance is slightly off the top at the psychological area of $1,800, which would be a fresh all-time high. In the near future, though, the latest high around $1,788 is the main focus as a resistance. Low support is the other important psychological area of $1,700 at the very bottom of the chart. For the next few weeks, though, other supports from moving averages are likely to be more important.

Moving averages continue to print a strong buy signal, with the 50, 100 and 200 SMAs successively above each other and below price. The 50 SMA from Bands golden crossed the other two in the middle of June, then the 100 did likewise with the 200 near the end of the month. In the immediate future, the 50 SMA is the most important support, but one might reasonably expect a deeper retracement to be halted in the value area between the two slower MAs.

The deviations of Bollinger Bands (50, 0, 2) have contracted fairly sharply since the middle of last week, which would usually suggest that the symbol has now entered a period of lower volatility and possibly consolidation. While there’s no sign of overbought from Bands, the slow stochastic (15, 5, 5) at 81 is still overbought and has recently completed a downward crossover within this zone of saturation. Short-term sellers appear to have jumped in on this with some eagerness based on volumes, but it’s probably too early to start looking for a deep retracement.

Price action recently seems to confirm the 50 SMA’s importance as a support. One can observe long tails of several down candles near this area, suggesting that selling pressure is overwhelmed or only present in the short term. The extended three soldiers this morning GMT would conventionally indicate ongoing gains after the current retracement.

The 61.8% area of the daily Fibonacci fan is the only key Fibo zone at the moment. This area has withstood repeated testing, with each breakout failing to close much below it. A series of daily closes below would allow us to assert that consolidation and relative stability might continue. 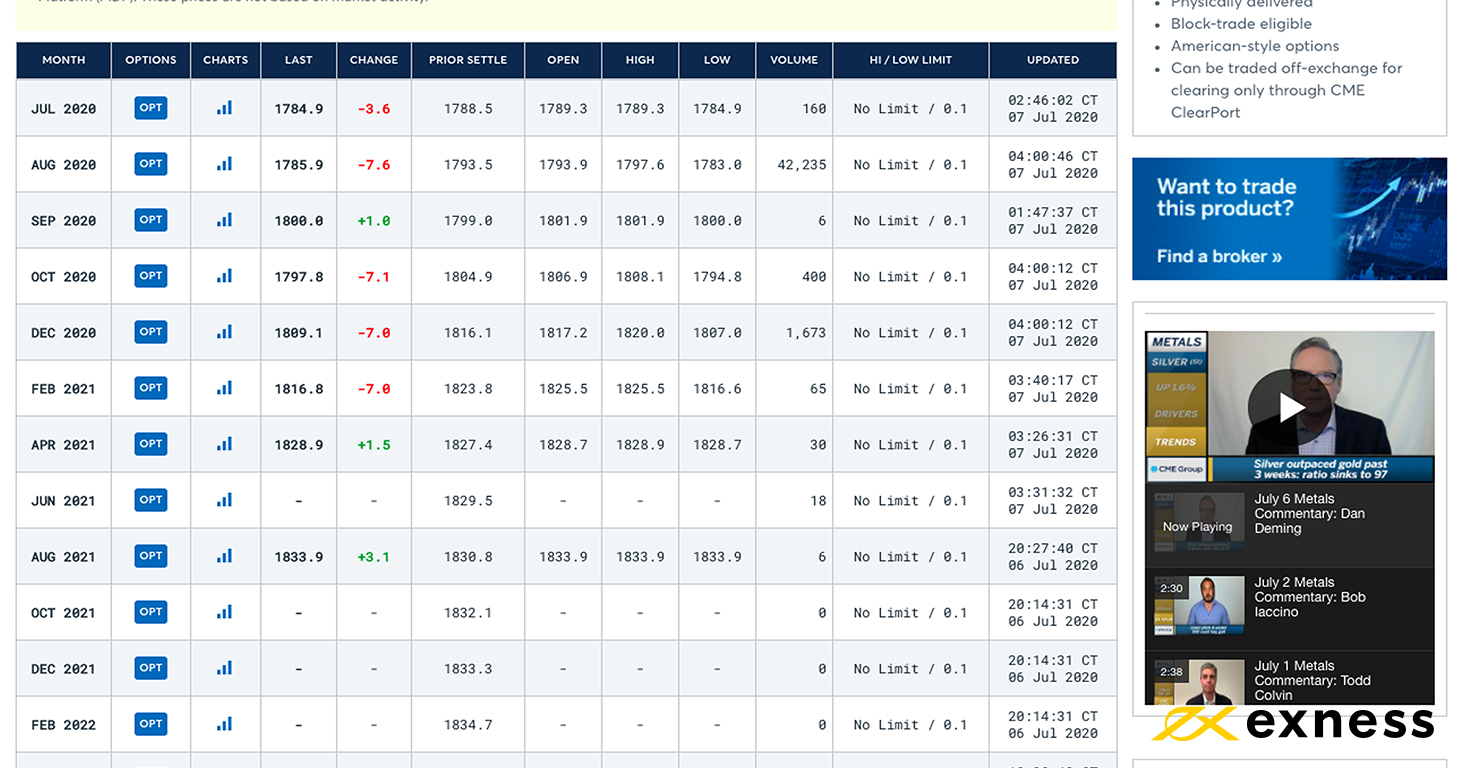 The current situation of moderate contango supports the impression from TA that more gains are possible in the medium term. Click on the image to magnify. Prices of futures to April 2021 have generally reconfigured over the last few weeks to present a mostly consistent increase for each month’s contract. August, with easily the highest volume among these, has basically reflected the spot metal and the CFD on this today by declining about $8.60 at the time of writing.

The very low volume for subsequent contracts, i.e. September onward, could suggest traders’ reluctance to commit in the current atmosphere of ongoing uncertainty. Equally, it might just be telling us that consolidation is possible and there’s no demand to push price significantly in either direction.

Overall the technical picture for gold-dollar suggests more gains but the timing and extent of these remain somewhat unclear. A breakthrough from $1,788 would probably lead to a test of $1,800, but nervousness in markets recently means that short-term trading with eyes on fundamentals is likely to remain in vogue.

Thank you for reading Exness Education’s technical analysis of XAUUSD! Please join us again on Thursday for more analysis and on Monday for our weekly preview of data. Don’t forget that you can ask us to write about a symbol here by leaving a comment on Facebook.