With bitcoin finally passing block #630,000, which marked its third halving, there are a lot of enthusiasts posting messages into the blockchain when they make transactions. One of the most posted is this one, a message embedded in one of the transactions in block #629,999, the final block prior to the halved reward (6.25 BTC per block): 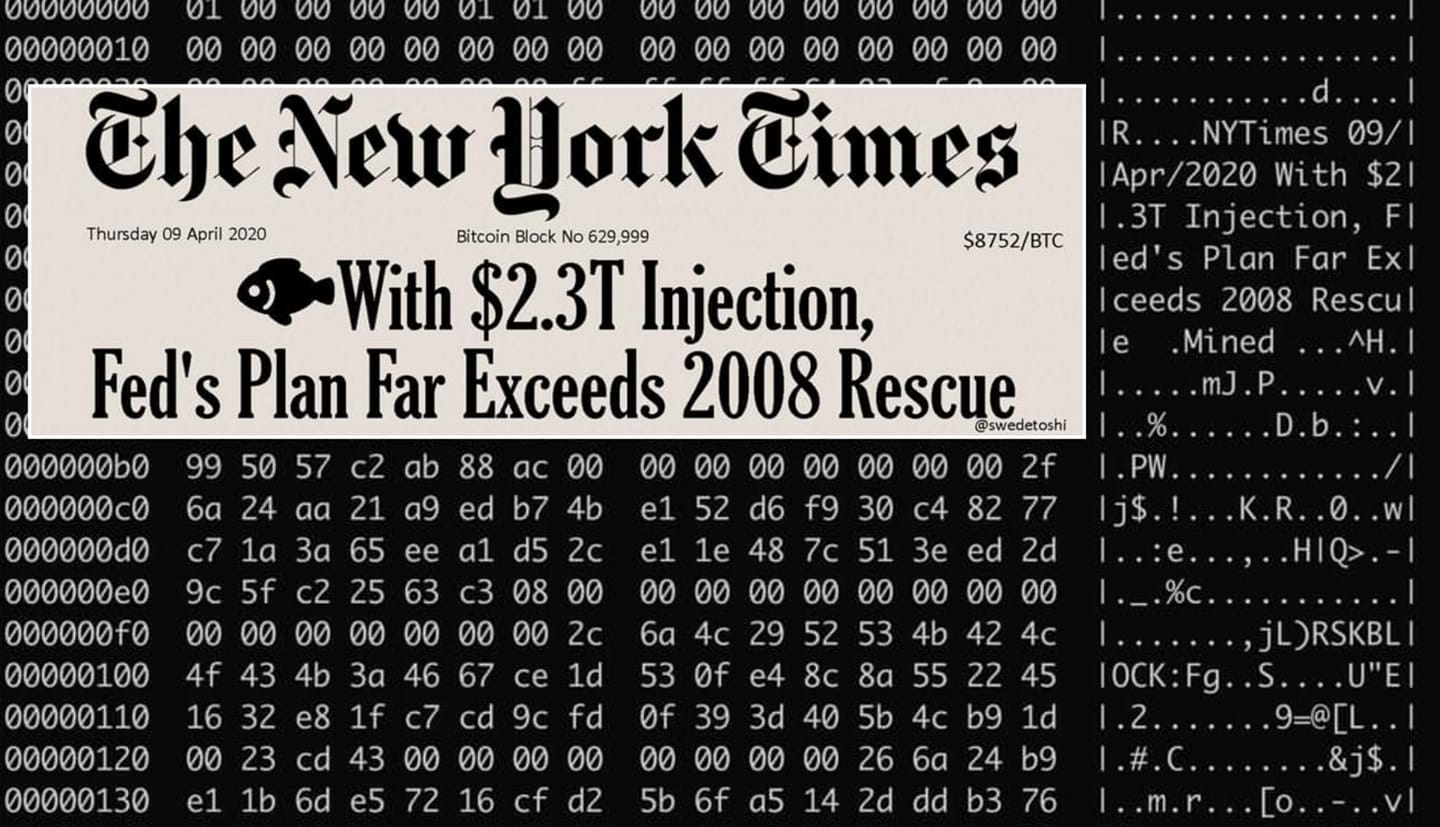 This headline has certainly created anxiety among traders in various markets. It seems that the Fed is preparing for a worse crisis.

Meanwhile, businesses have generally reopened in the US although a small number of them are still closed due to local regulations in certain counties. This has created controversy worldwide as Mr Trump is encouraging businesses to reopen because the US is experiencing the worst COVID-19 outbreak. This decision was political in the runup to November’s election. Mr Trump wants to take credit if the economy runs well and avoid being blamed if it slows down.

The latest unemployment rate in the US hit 14.7%, quadrupled from 3.5% in March 2020. Compared to unemployment around 2008’s crisis, this COVID-19 crisis is worse. Unemployment during the former only hit 10.2% (according to data from investing.com). This number can grow if there’s no concrete action by the authorities to boost the economy. They tried to give more liquidity to the market, but it is believed that there won’t be a lot of businesspeople willing to borrow money to expand at this time; instead, the money will flow into financial markets which are more liquid and easy for them to enter and exit.

With the increase of volatility recent, opportunities are there. For short-term traders, selling indices has been popular recently because prices show weakness in many cases. 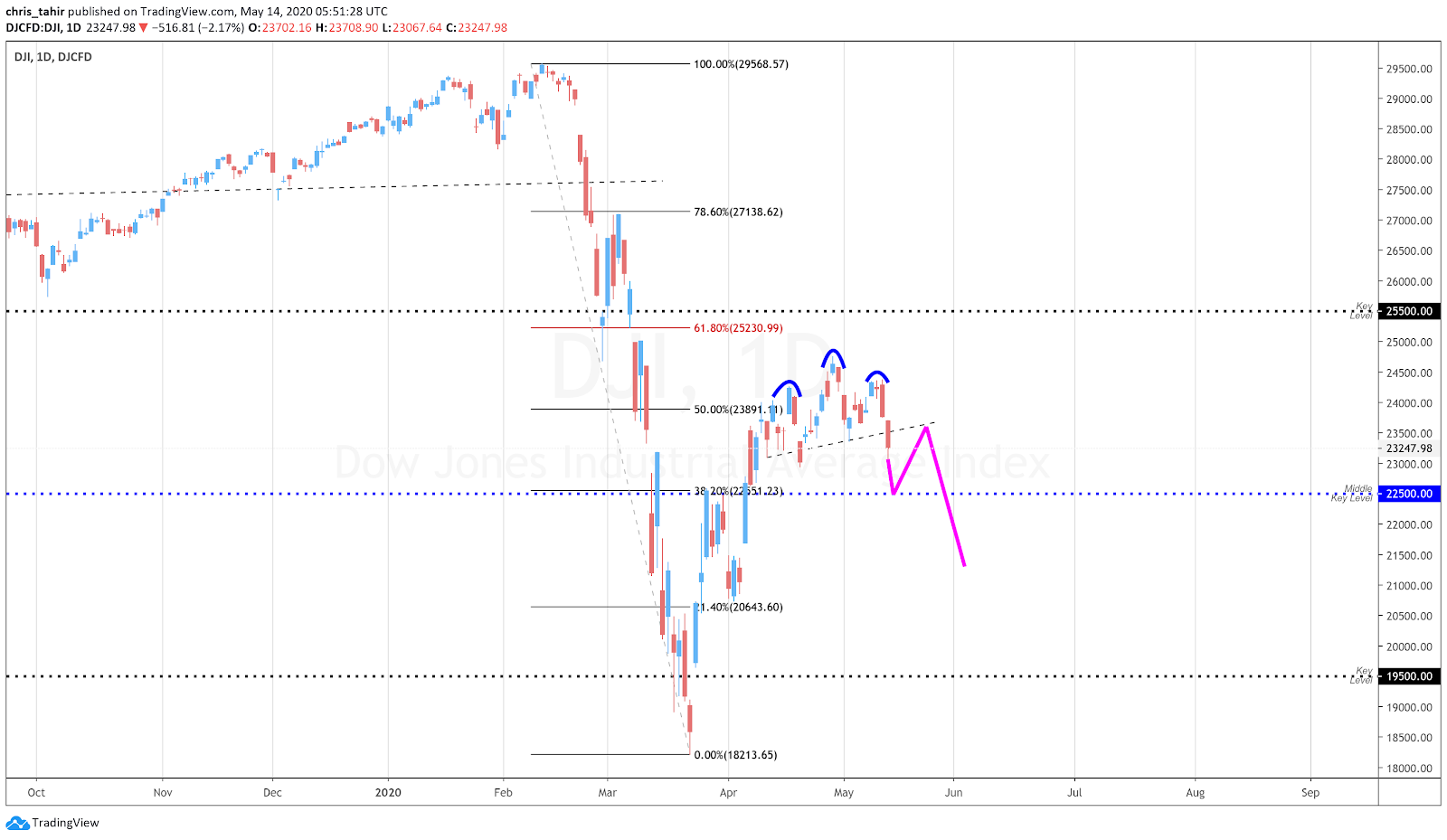 The pattern suggests that it is forming a head and shoulders which potentially moves according to the scenario (magenta lines). The pattern also formed within the 50-61.8% Fibonacci retracement areas. If this scenario develops, the opportunity is open for traders to sell.

The VIX climbed back from recent lows around 26.00 to 35.28. Fear is accumulating and could skyrocket in the near future. 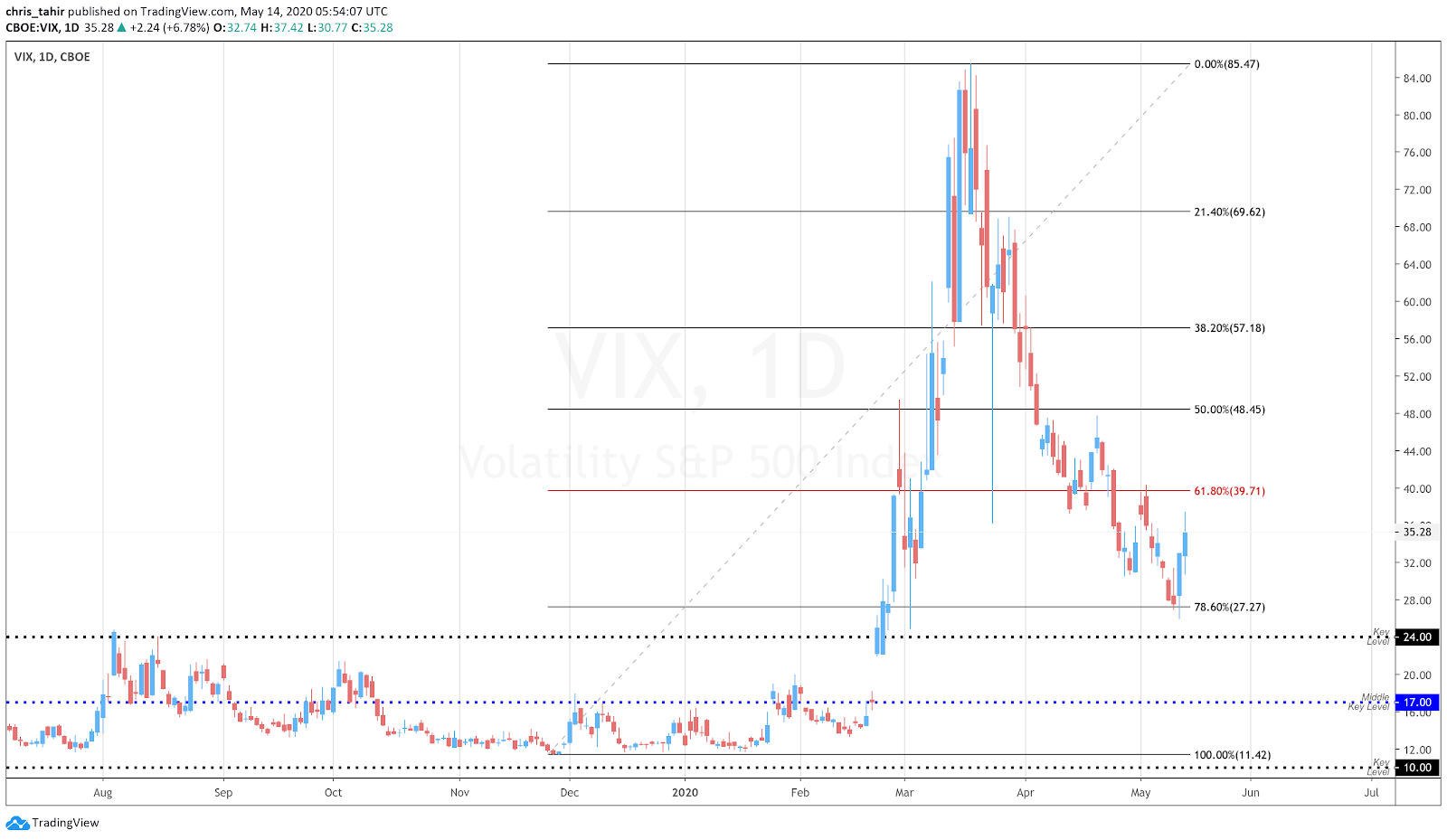 This chart suggests that the decline is not as steep as the incline that happened since mid February. We can probably expect another steep increase in the near future.

This condition would create more and more loose monetary policy around the world, which would mean weakening currencies and bloodbath in major markets. On the other hand, cryptocurrencies might flourish due to the halving of Bitcoin. We’ll see how the situation develops in the next few days and weeks.

Disclaimer: the publication of informational tips for traders is a marketing communication and does not constitute investment advice or research. Its content represents the general views of our experts and does not consider individual readers’ personal circumstances, investment experience or current financial situation. Tips for traders are not prepared in accordance with legal requirements promoting independent investment research and Exness is not subject to any prohibition on dealing before the release of tips for traders. Readers should consider the possibility that they might incur losses. Exness is not liable for any losses incurred due to the use of tips for traders.