A degree of optimism in many markets has continued so far this week as China’s manufacturing has returned to growth and countries around the world continue to ease their lockdowns. This week’s critical data is Friday’s non-farm payrolls; the RBA, BoC and ECB also meet this week. Keep reading Exness Education’s weekly data preview for possible zones of importance on four key charts this week.

The only noteworthy event among central banks last week was the National Bank of Poland’s 0.1% cut to its reference rate. This week sees successive meetings of major central banks tomorrow and on Wednesday and Thursday. No changes in rates are expected but what the committees and boards say could be crucial for the euro and the Aussie and Canadian dollars ahead of the Fed’s meeting next week.

May’s Caixin manufacturing PMI early this morning indicated that Chinese manufacturing has now returned to slight growth. South African PMI also showed small growth. Equivalent PMIs from other countries in the eurozone plus Russia though remained weaker in the 30s and 40s. 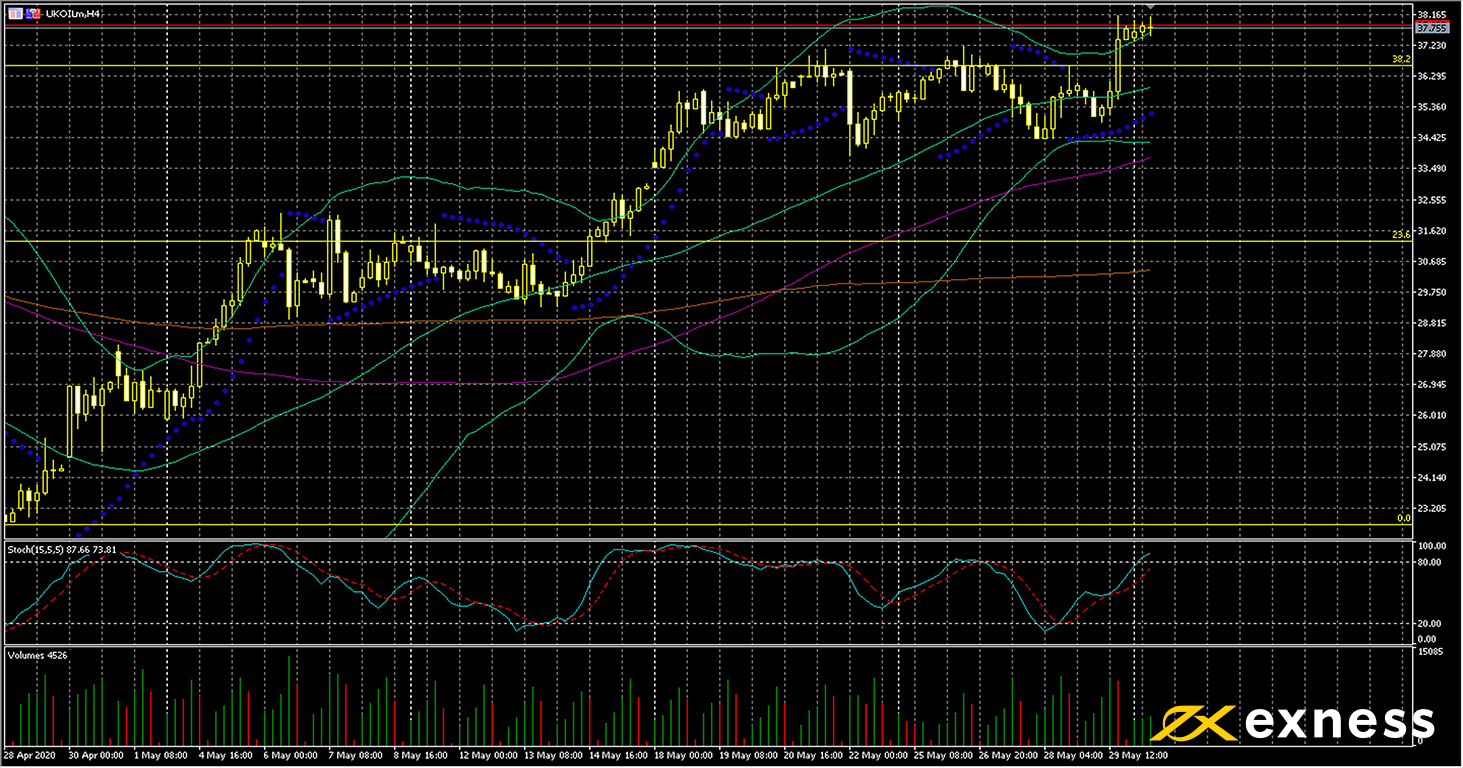 Both benchmarks for crude oil have made gains so far today. Apart from a degree of positivity in general as the outlook for demand improves slightly, this morning’s Chinese data was a source of hope for bulls. Weekly stock data from the USA was somewhat less bad in general last month than it had been in March and April, so the EIA’s releases on Wednesday might be key.

From a technical point of view, Brent seems to have overextended this morning. Both the slow stochastic and Bollinger Bands print overbought signals. On the other hand, Bands have contracted quite sharply since the middle of last week, so it’s possible that price is building for a breakout upward. Moving averages continue to print a strong buy signal and volume remains mostly consistent with May’s figures. 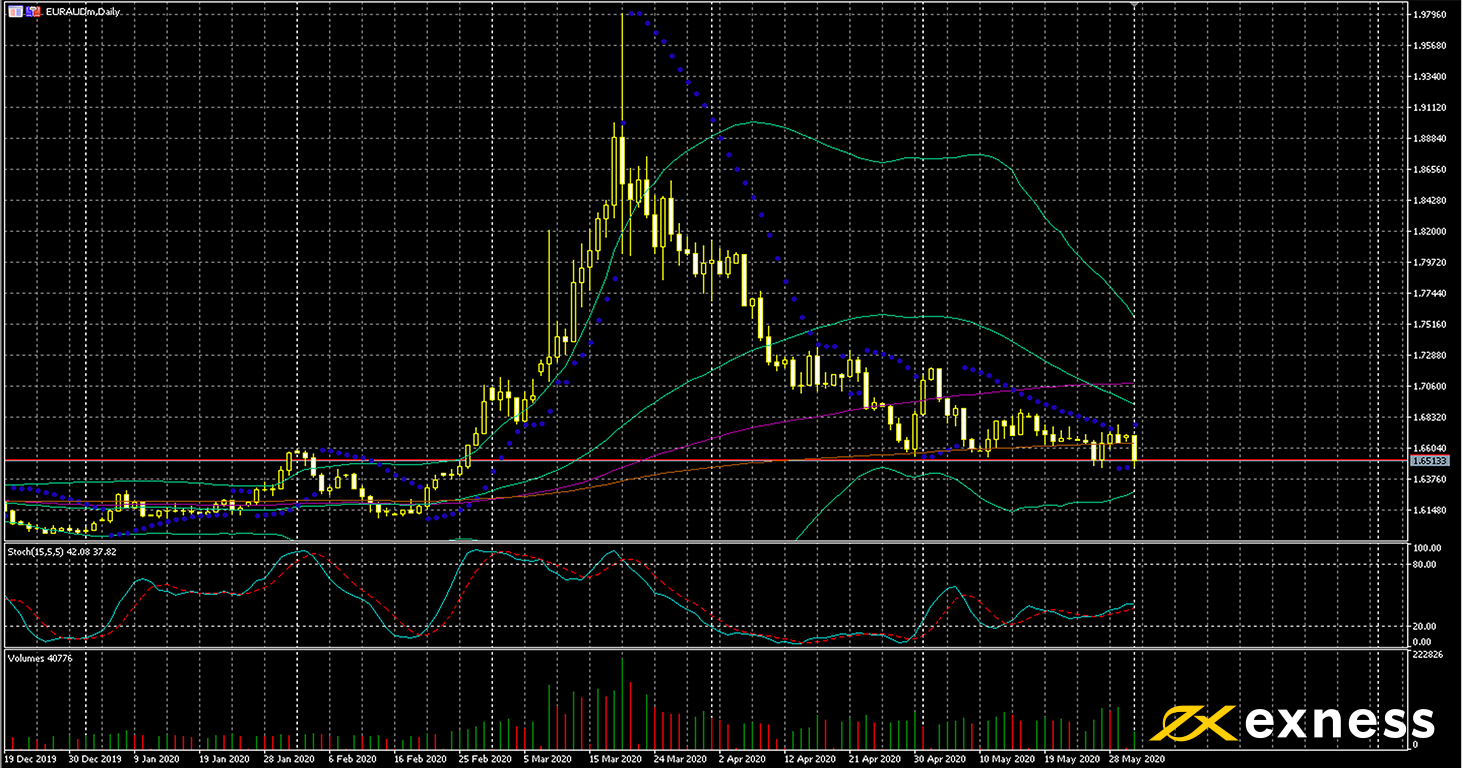 EUR–AUD has continued its decline so far today. The Australian economy seems to be set for a quicker recovery than that of the eurozone, and recent data from Australia generally hasn’t been as bad as releases from key European economies such as Germany. There’s a bumper crop of data from Australia this week with no less than three crucial releases plus the RBA’s meeting, so fundamentals are clearly in view this week.

Price has been testing support around A$1.65 today with no success so far. Given the lack of saturation based on the stochastic and Bands plus the death cross of the 50 and 100 SMAs last week, more losses seem to be favourable here. These would depend though on the data from Australia. No change to the cash rate is likely tomorrow but GDP data and balance of trade might generate strong reactions. If Australia’s quarterly GDP does turn negative as expected, EUR–AUD would probably receive a short-term boost. 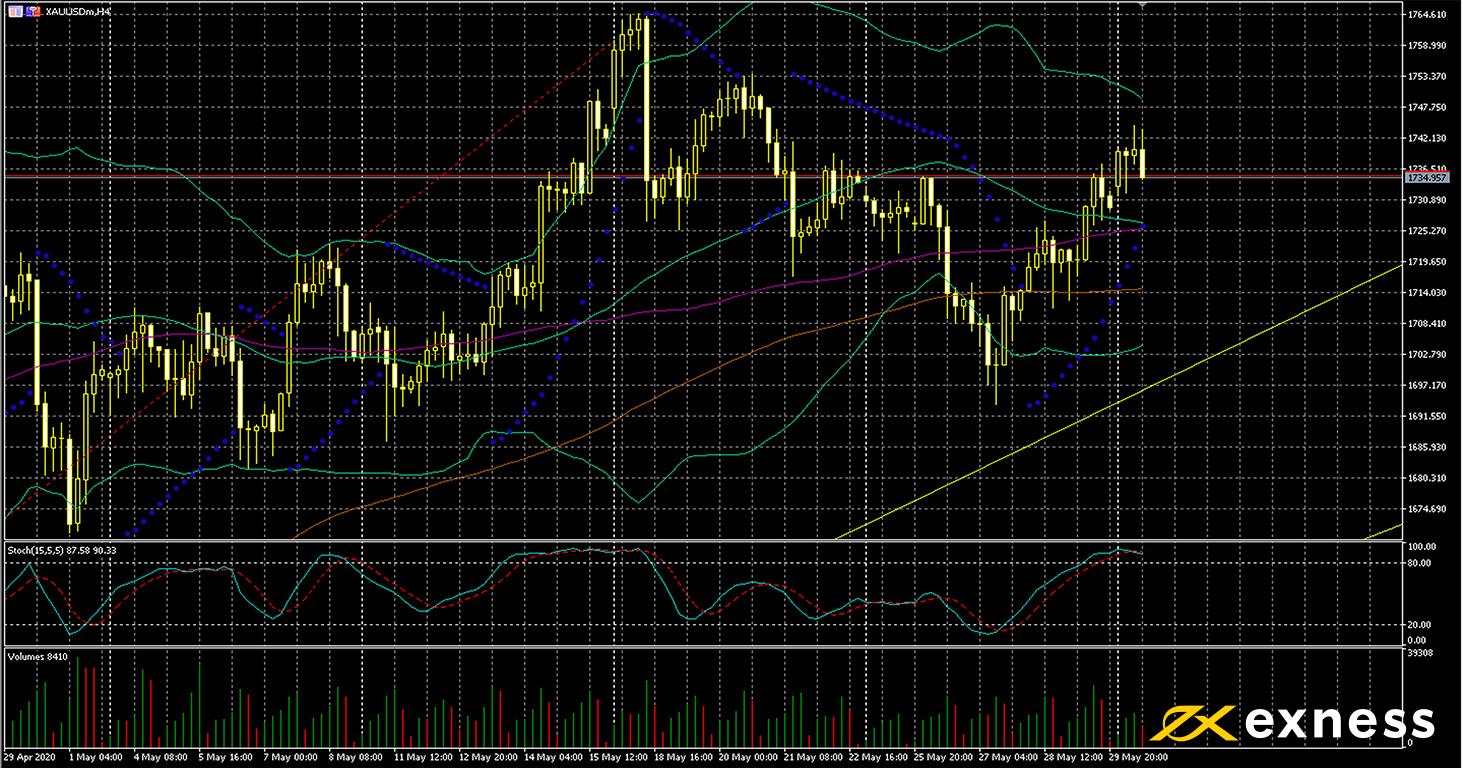 Gold has moved back up since the middle of last week. Although there has been greater optimism in stock markets recently, some nervousness has persisted due to tension between the USA and China over Hong Kong last week. The dollar has also lost ground in many of its pairs so far this week as rioting in many American cities related to the unlawful killing of George Floyd by police has intensified.

The uptrend clearly remains active here despite momentum having been weaker since mid-April. The 38.2% area of the Fibonacci fan from the daily chart (the yellow line on the right of the chart) has yet to be tested seriously. Moving averages continue to print a buy signal; however, the 50 SMA might death cross the 100 within the next few periods. Overbought is suggested by the stochastic but Bands sloping gradually downward do not indicate saturation. The NFP is crucial this week especially with the Fed’s meeting coming up next Wednesday. 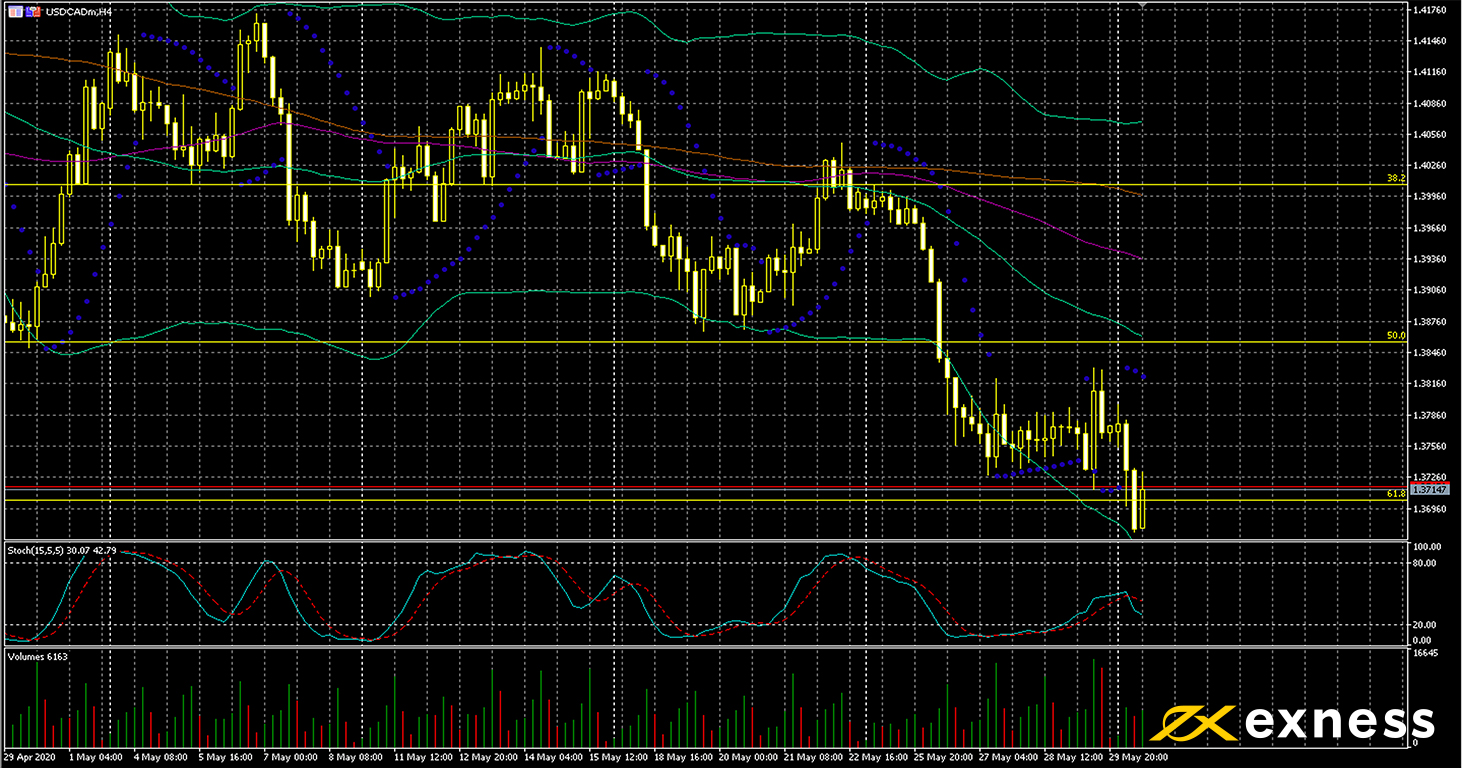 The greenback has continue to lose strength against its northern counterpart so far this week against the backdrop of oil’s gains in instability in the USA. Canada also seems to have been more effective in handling covid-19 and might return to more-or-less normal economic operations significantly sooner than the USA.

Based on TA it looks like a challenge for USD–CAD to extend much below the current area in the near future. The intersection of C$1.37 with the 61.8% Fibonacci retracement area (based on the daily charts) could continue to bar downward movement. Volume of both buying and selling has increased significantly over the last few weeks compared with May’s average, though. As yet there is no indication of oversold.

Either or both of the BoC’s meeting and the NFP could provide impetus in either direction depending on the outcomes. Traders should be aware that this symbol will almost certainly be extremely volatile around the basket of releases at 12.30 GMT on Friday.

Thank you for reading Exness Education’s weekly data preview! Join us again throughout the week for more analysis of active instruments. We wish you a week of successful and responsible trading.