Some of the most important events in markets this week include releases of inflation and GDP data from around the world. The Reserve Bank of New Zealand and the Banco de Mexico are also due to meet on Wednesday and Thursday. Exness Education’s weekly data preview looks gold plus EUR–NZD and USD–MXN.

The sum of last week’s data was generally a bit better than expectations though still very negative. Friday’s NFP, the most important release of the week, came in at negative 20,500 against the consensus of around -22,000. American shares reacted somewhat positively to the news. Equity markets have mostly posted some gains so far today in light of this and ongoing steps to ease lockdowns in many countries.

The only significant action among central banks last week was the Norges Bank’s cut of 0.25%, taking the key policy rate to 0%. This week’s important events for monetary policy are the meetings of the RBNZ and Banxico. The latter is expected to cut its benchmark rate to 5.5%.

Traders will also be monitoring Chinese inflation early tomorrow morning and GDP growth from a number of countries in the Eurozone on Friday morning (the UK releases preliminary data on Wednesday). The most important data this week though is the USA’s annual core inflation at 12.30 tomorrow. 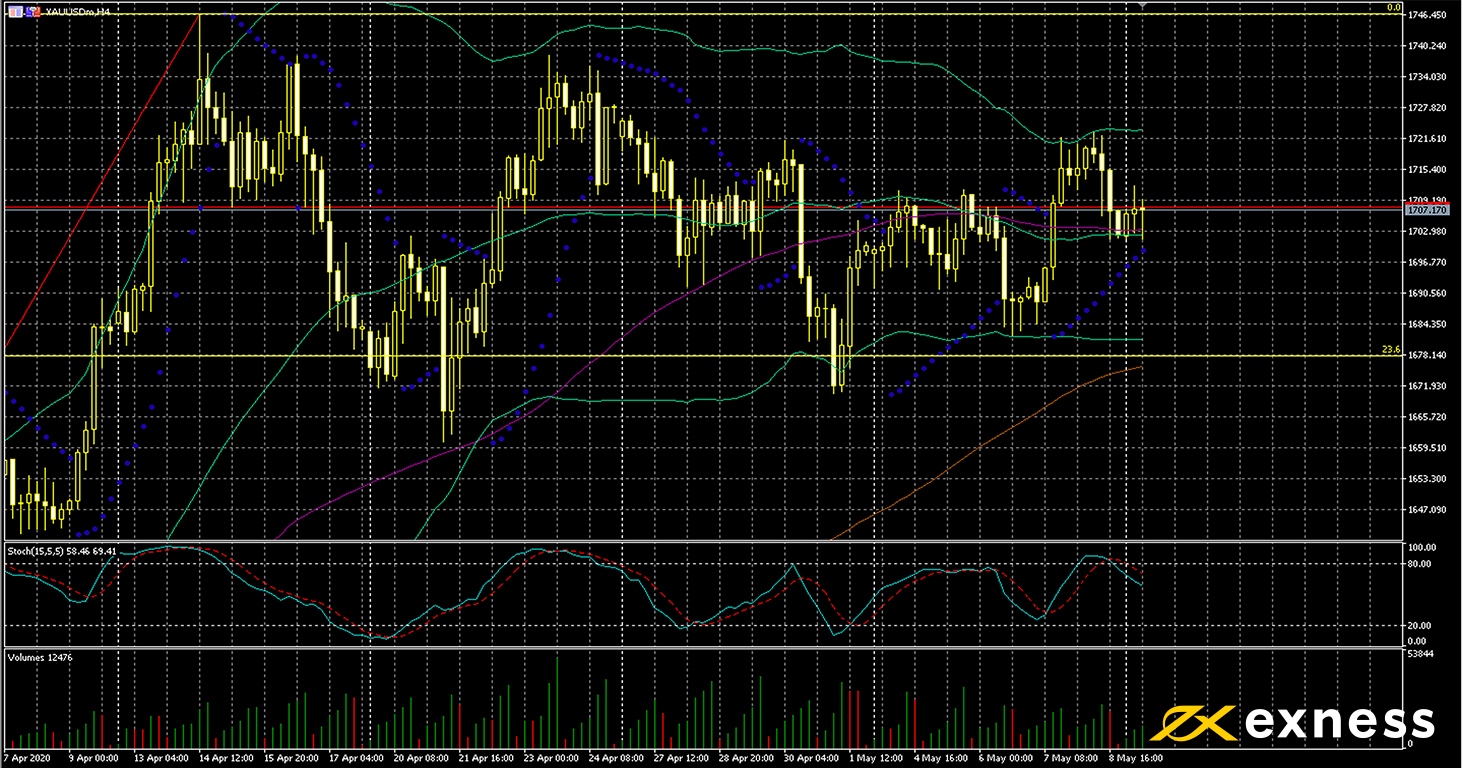 Gold’s range has contracted somewhat over the last few weeks. Click on the image to magnify. From a fundamental point of view, there’s no impetus higher here barring another round of panic selling or at least significant further losses by major indices.

Equally, the current environment of zero interest in many countries removes the traditional factor against buying gold among many investors, so pressure to the downside is likely to be absent in the near future. News-based momentum upward could come from a second wave of infections primarily in east Asia which might occur over the next few weeks or in Europe as lockdowns loosen.

This four-hour chart of XAU–USD shows us a fairly clear channel between the latest high around $1,746 and the 23.6% Fibonacci retracement area at about $1,678. In the short term, though, $1,700 has been a very important psychological support. There has also been bunching of the 50 SMA from Bands with the 100 in the latter zone. The most important data here is tomorrow’s inflation from the USA, but traders of gold will be monitoring stock markets and the possibility of a new wave of covid-19 as well this week. 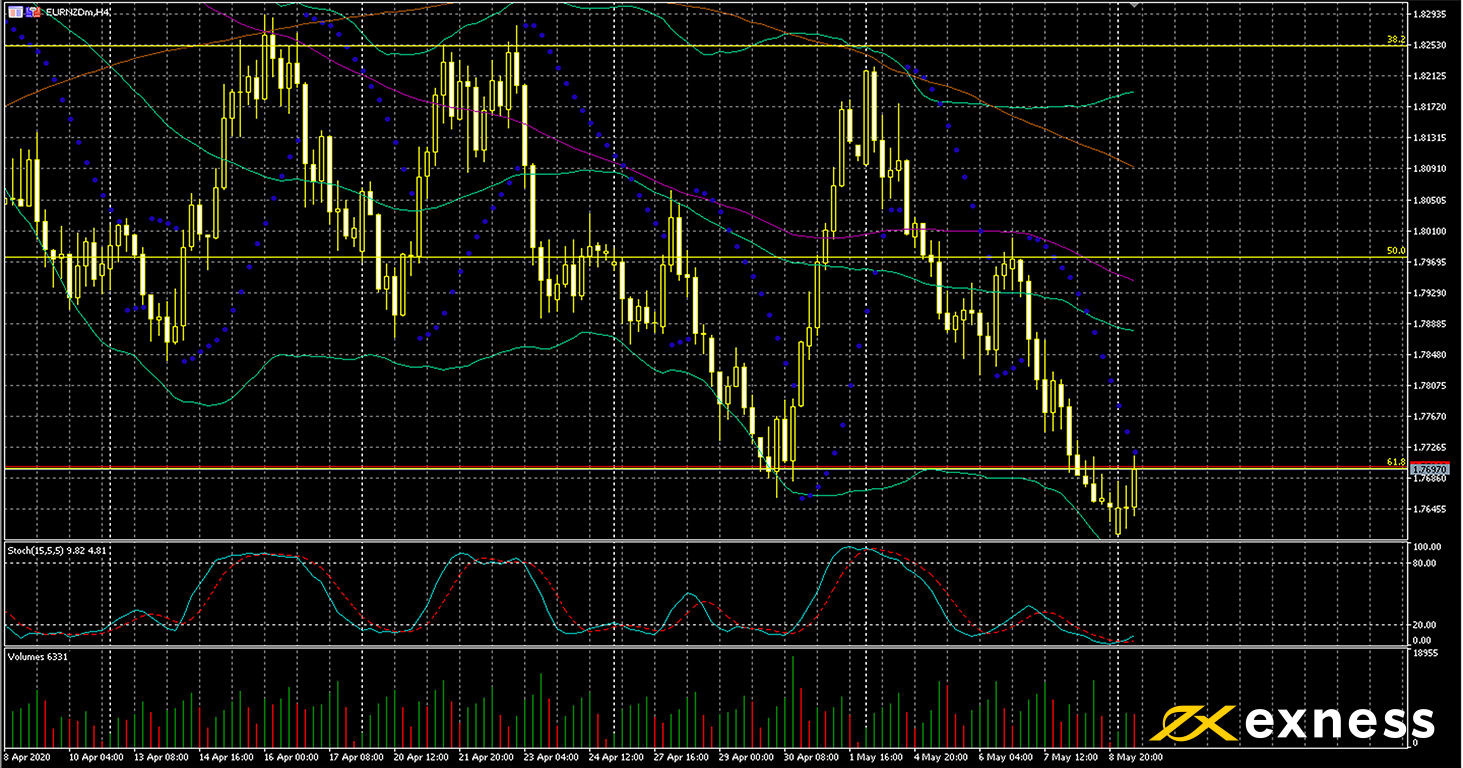 The Kiwi dollar has recovered somewhat against most currencies from March’s panic selloff. Click on the image to magnify. New Zealand is one of the relatively less affected countries from covid-19.

Although there has certainly been a hit to trade, particularly crucial exports of dairy and meat, the rate of infection in New Zealand was among the first to slow considering advanced economies. NZ is due to reopen shopping centres and cafes on Thursday, and the NZX 50 was also up 0.6% to 10,760 this morning, near two-month highs.

Price action over the last few periods does seem to suggest that EUR–NZD has hit a bottom for now, though. This morning’s open only slightly above $1.76 was a two-month low, but the slow stochastic gave nearly the strongest possible oversold reading at 2. Large real bodies of the subsequent candles so far moving back above the 61.8% Fibonacci retracement area suggest ongoing retracement upward over the next few periods.

The RBNZ’s meeting on Wednesday is the big event: no change to the cash rate is likely but traders will watch closely for the extent of the central bank’s expansion of quantitative easing. Friday is also a very important day for European data, with Germany’s GDP growth probably the most significant release then. 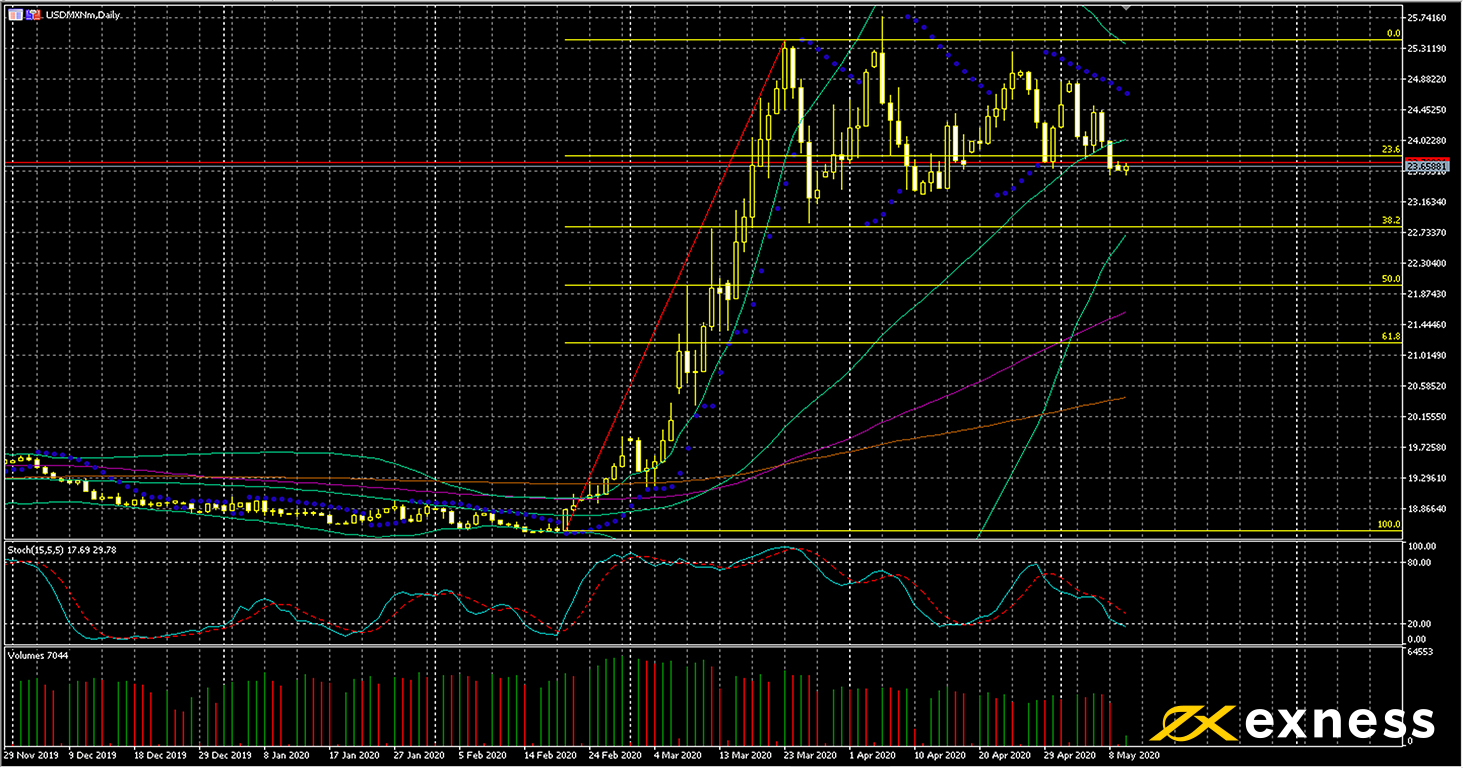 USD–MXN has stabilised over the past few weeks as the initial panic wore off and the price of oil has recently retraced upward. Click on the image to magnify. Covid-19 has overall had a greater negative effect on the American economy than that of Mexico. So far, there is no indication that the sharp devaluation of the peso has led to inflation; the latest CPI at 2.15% means that Banxico has room to keep cutting rates in an effort to stimulate the economy.

In the short term, the most important support is probably the 23.6% Fibo which price is currently testing. The presence of the lower deviation of Bollinger Bands just below the next Fibonacci zone, the 38.2%, means that around $22.80 could be a strong support looking further ahead. The slow stochastic has moved into oversold as of this morning GMT, so a bounce on the lower timeframes seems likely ahead of Thursday’s news.

Apart from the meeting of Banxico on Thursday as the key event, many of the same American events as above will be in view for traders of dollar-peso. Tomorrow’s industrial data from Mexico will probably be overshadowed by American inflation.