The most important regular data for financial markets this week is tomorrow’s claimant count change from the UK. Other key releases due this week are ZEW sentiment from Germany plus annual inflation in Canada, Japan, Sweden and the UK. Exness’ weekly data preview looks at the charts which could move around these releases.

One of the biggest losers last week was the euro. The common currency declined sharply against the dollar in particular, reaching a low of around three years below $1.09. Markets are increasingly expecting the ECB to cut its key interest rate into negative territory or at least expand quantitative easing in the near future.

The biggest news from central banks last week was Banxico’s cut of its benchmark rate by 0.25% to 7%. This move was widely expected, so the peso hasn’t seen much more volatility than usual.

On the whole, most international markets have recovered somewhat from the shock of the outbreak of the coronavirus. Oil bounced last week and gold failed to move up any further. A possible exception is Japan: GDP declined by 1.6% in the fourth quarter as announced this morning. This disappointing result might contribute to JP225 extending recent losses. 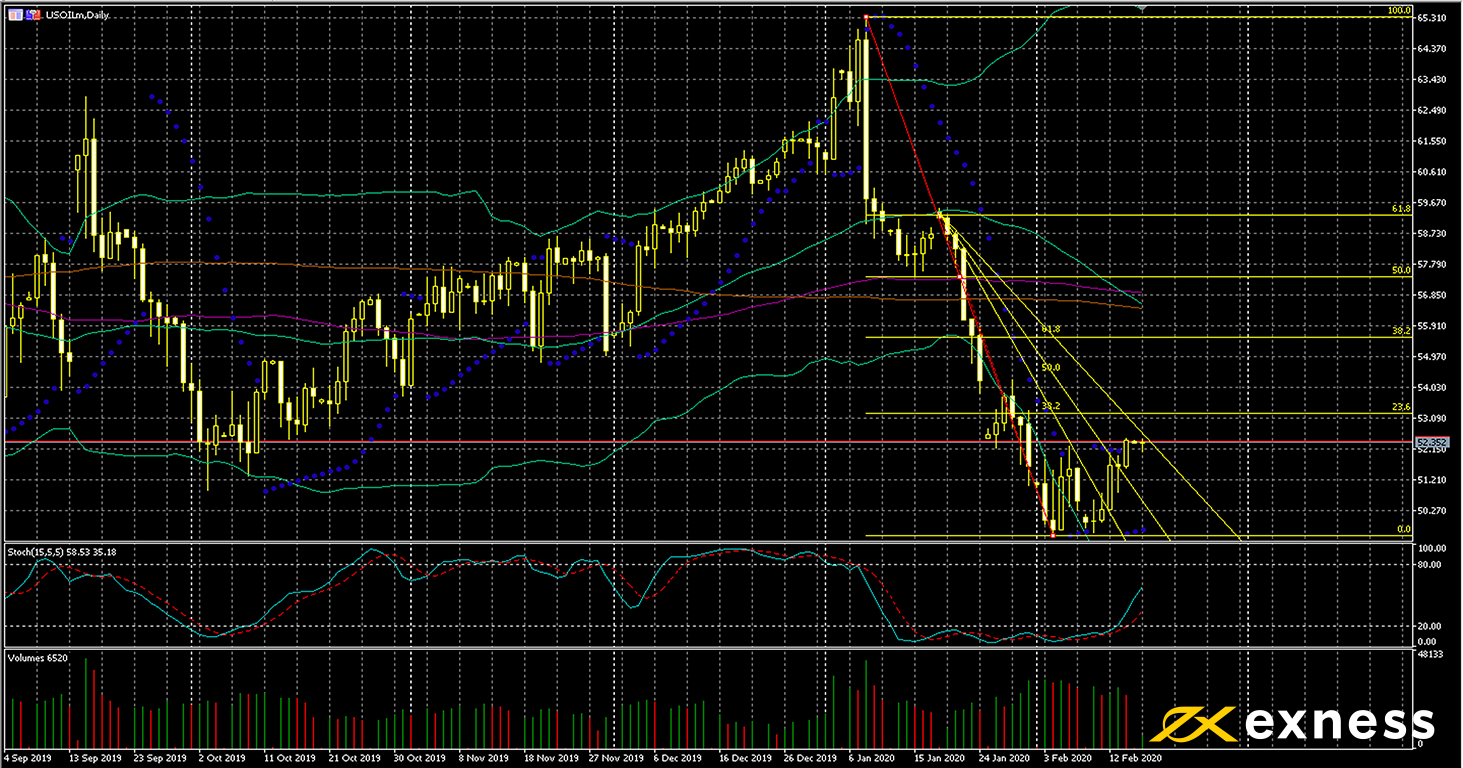 USOIL’s sharp losses have halted for now. The commodity’s price moved up last week as China announced significant reductions in the numbers of new cases of coronavirus for three consecutive days. Despite this, the EIA’s stock data was significantly worse than expected. Price has yet to react significantly to reports yesterday evening GMT of rocket attacks on American bases in Iraq.

Last week was crude’s first weekly gain in 2020. From a technical perspective it was due: selling saturation had dominated throughout the first half of February. Price has now moved clearly out of oversold on the dailies, with the main line of the stochastic now even coming above neutral somewhat at 58.

Some very aggressive traders might be targeting the cluster of the three moving averages. Realistically though the 61.8% area from the Fibonacci fan and the 23.6% Fibonacci retracement area are likely to be fairly strong resistances before distant prices like $56-57. 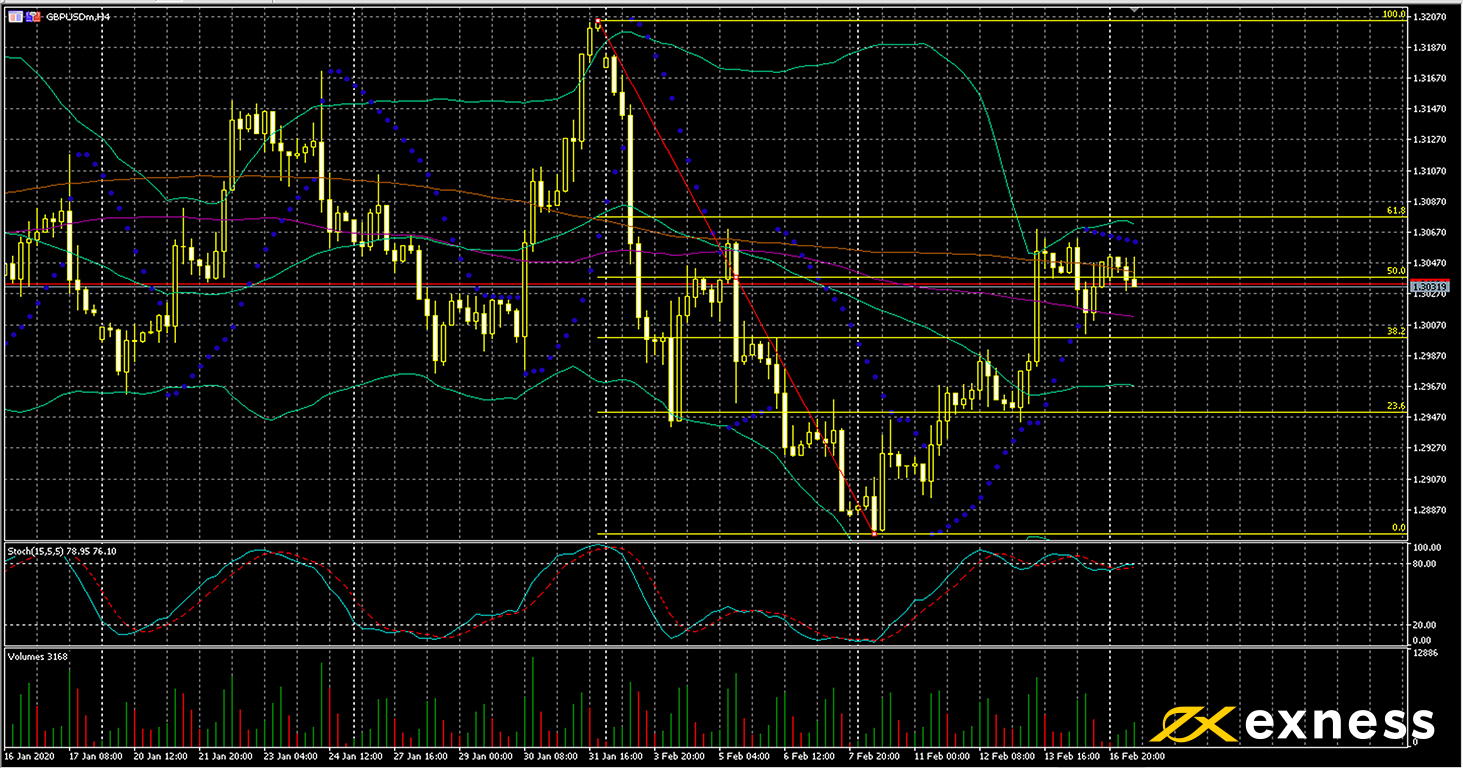 Cable has been moving in basically a sideways trend in 2020 so far as news on trade negotiations continues to be somewhat contradictory. The new Chancellor Rishi Sunak appears to be a positive factor for the pound. Mr Sunak is expected to act more in line than his predecessor with the Prime Minister’s plans for economic stimulus by means of higher spending.

The property market in the UK also seems to be performing quite well, with the Rightmove index moving up 0.8% in the past month. The index is now only slightly below the record highest average. American data meanwhile has been reasonably good since last week, with inflation and retail sales in particular meeting expectations.

The clearest feature of the chart of cable is the presence of price within the ‘value area’ between the 100 and 200-period simple moving averages. Price remains significantly above the 50 SMA from Bands. On the other hand, traders should notice that the slow stochastic is very close to the overbought zone and buying volume has decreased significantly compared with the middle of last week. It would seem to be difficult for the pound to extend its recent gains this week unless tomorrow’s claimant count change is particularly good. 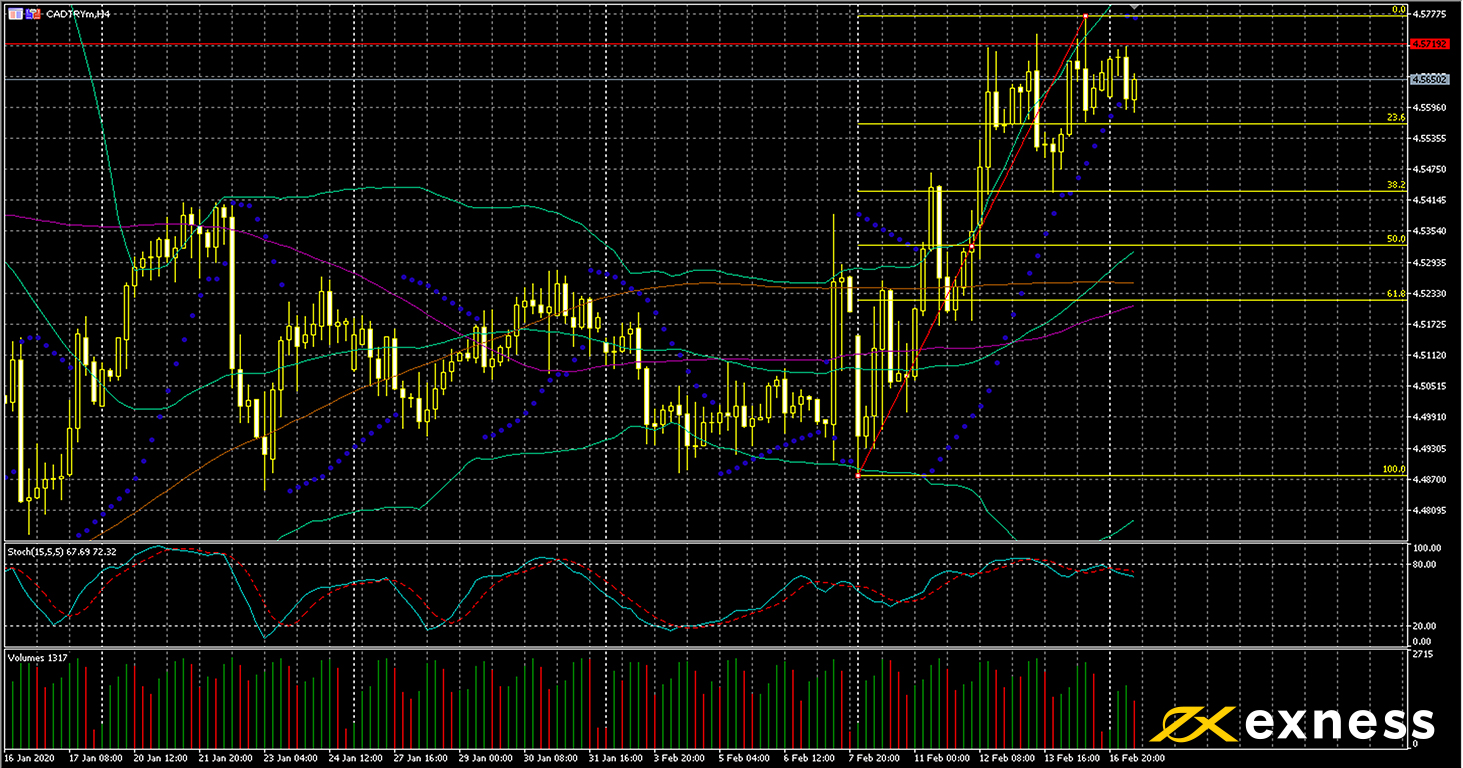 Like many other pairs with the lira, CAD–TRY moved up quite strongly last week as tensions in northern Syria intensified again. Despite President Trump hailing his Turkish counterpart President Erdogan yesterday for preventing a ‘humanitarian catastrophe’ in Idlib, there remains some potential for volatility due to Turkey’s intervention in Syria.

On the other hand, Turkey’s central government announced this morning GMT a budget surplus of ₺21.5 billion for January. This is one of the highest figures since the start of the lira crisis in 2018 and appears to support attempts by the government and the CBRT to normalise monetary policy. The loonie meanwhile was supported by the rising price of oil last week.

The potential is still there for CAD–TRY to continue moving upward. The current area seems to be a resistance given that price has attempted repeatedly to move up since the middle of last week. One can observe a number of long wicks since Tuesday night GMT.

The double golden cross of the 50 SMA over the 100 and 200 SMAs combined with the decline of the slow stochastic out of overbought suggest that this could be a suitable place to buy in. However, any trader doing this would need to expect the unexpected at the TCMB’s critical meeting on Wednesday morning GMT. That afternoon’s inflation data from Canada will also probably cause high volatility for this symbol.

Thank you for reading Exness’ weekly data preview! Join us again throughout the week as we present more analysis of active instruments.