Weekly data preview: more stimulus in view from the Fed

Weekly data preview: more stimulus in view from the Fed

This week started with an increasing divorce between stock markets and the real economy. Various Asian and European shares have moved up so far today in the aftermath of Jerome Powell’s comments indicating openness to expansion of the Fed’s current lending programmes. Gold meanwhile has moved up to a fresh seven-year high. Exness Education’s weekly data preview takes a closer look at the releases that could affect gold, oil, EUR–GBP and USD–RUB.

Central banks weren’t particularly active last week with most having cut nearly to zero already. Banxico though cut its benchmark rate to 5.5% on Thursday night GMT as expected. This week sees the PBoC and the Bank of Thailand meet on Wednesday, with a cut to 0.25% expected by the latter, then on Thursday the CBRT is expected to cut its one-week repo rate to 7.75%.

Japanese quarterly GDP growth this morning indicated that Japan has now followed France, Germany and a number of other countries into recession. Some of the most important data coming up this week include tomorrow’s claimant count change and ZEW sentiment. 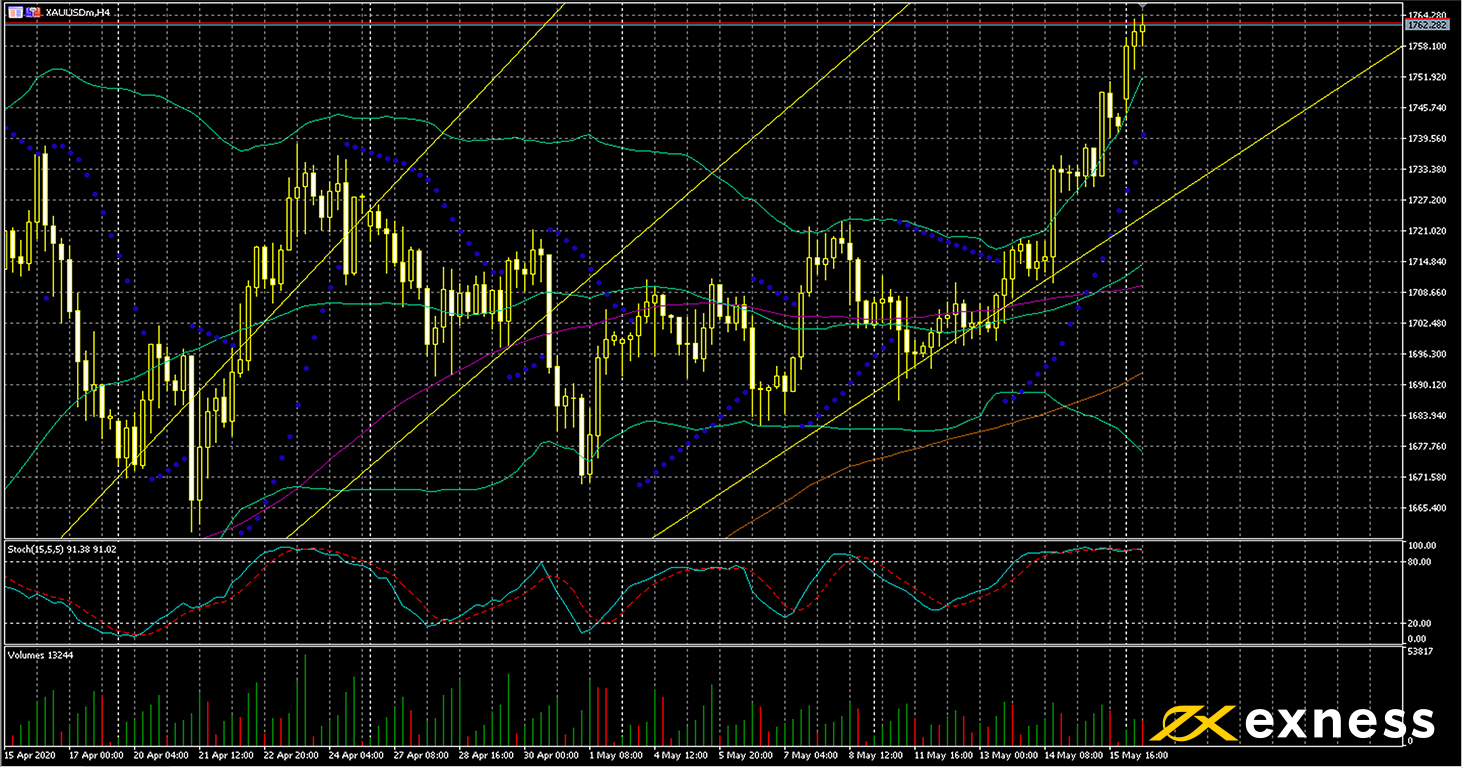 XAU–USD has jumped since the second half of last week, breaking the important psychological area of $1,750. Click on the image to magnify. Expectations of even longer economic recoveries around the world have combined with increasing tension between the USA and China plus exceptionally loose fiscal policy to produce ideal conditions for the yellow metal to make gains.

From a technical perspective, though, the current scenario of clear buying saturation would usually mean that a retracement is likely in the near future. Gold is on track to complete its seventh successive close outside the upper deviation of Bollinger Bands (50, 0, 2) and the slow stochastic (15, 5, 5) at 94 is very close to the maximum reading. Volume has also decreased significantly in May so far compared with the average in April.

There probably won’t be much direction from American data this week, so it’s likely that most traders will monitor statements from central bankers. Events in stock markets and the disconnect between these and the real economy are also key factors. 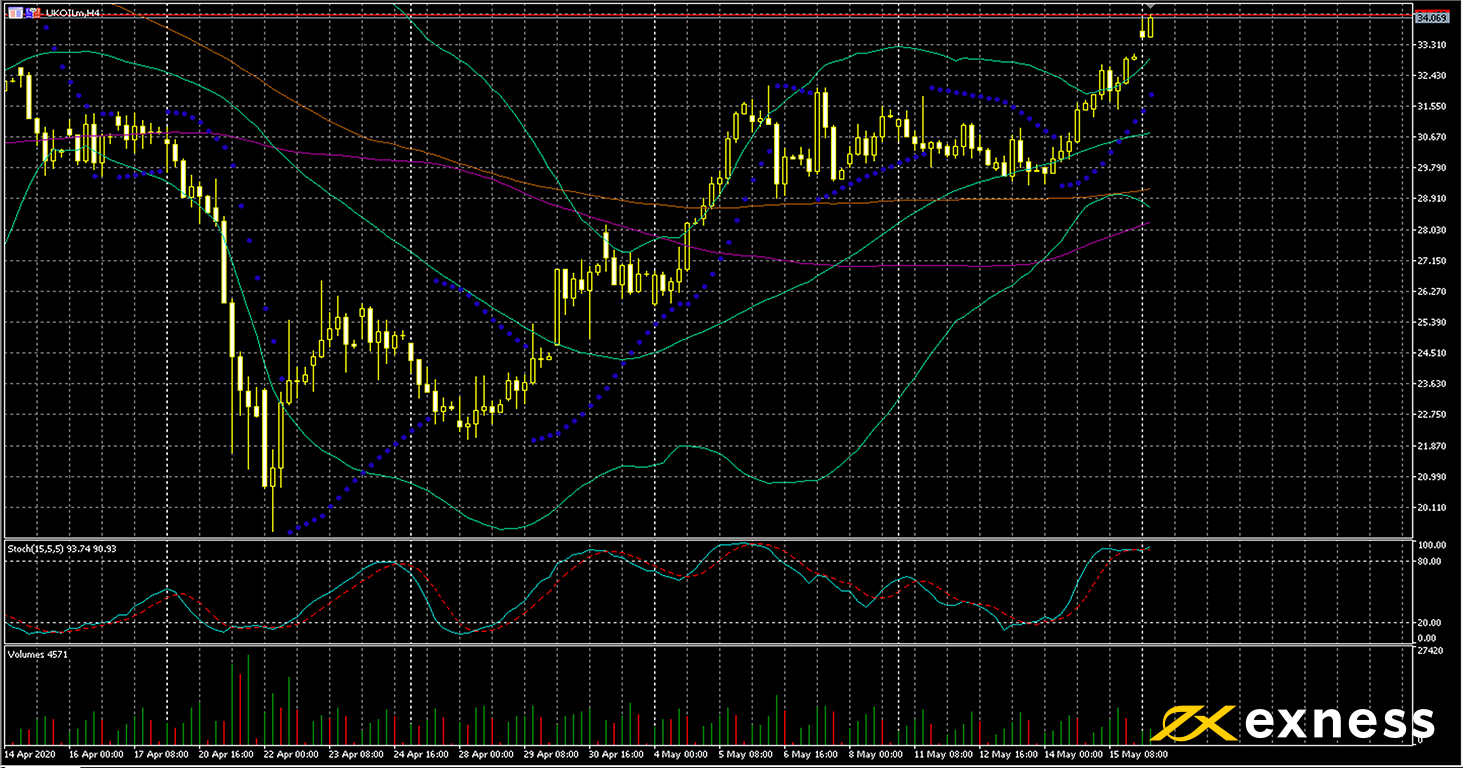 Both of the main benchmarks of crude oil have continued to make gains since the second half of last week. Click on the image to magnify. The outlook for demand in the second half of 2020 now appears to be slightly less bad than initially feared, and with prices at these levels no serious expansion of production is likely anytime soon.

The technical situation here is somewhat similar to that of gold-dollar, with strong overbought clear from both Bands and the stochastic. The first key hurdle for buyers is April’s brief high around $36, slightly above the top of this chart. Stock data from the USA are crucial this week: another drop would usually be expected to propel Brent higher. 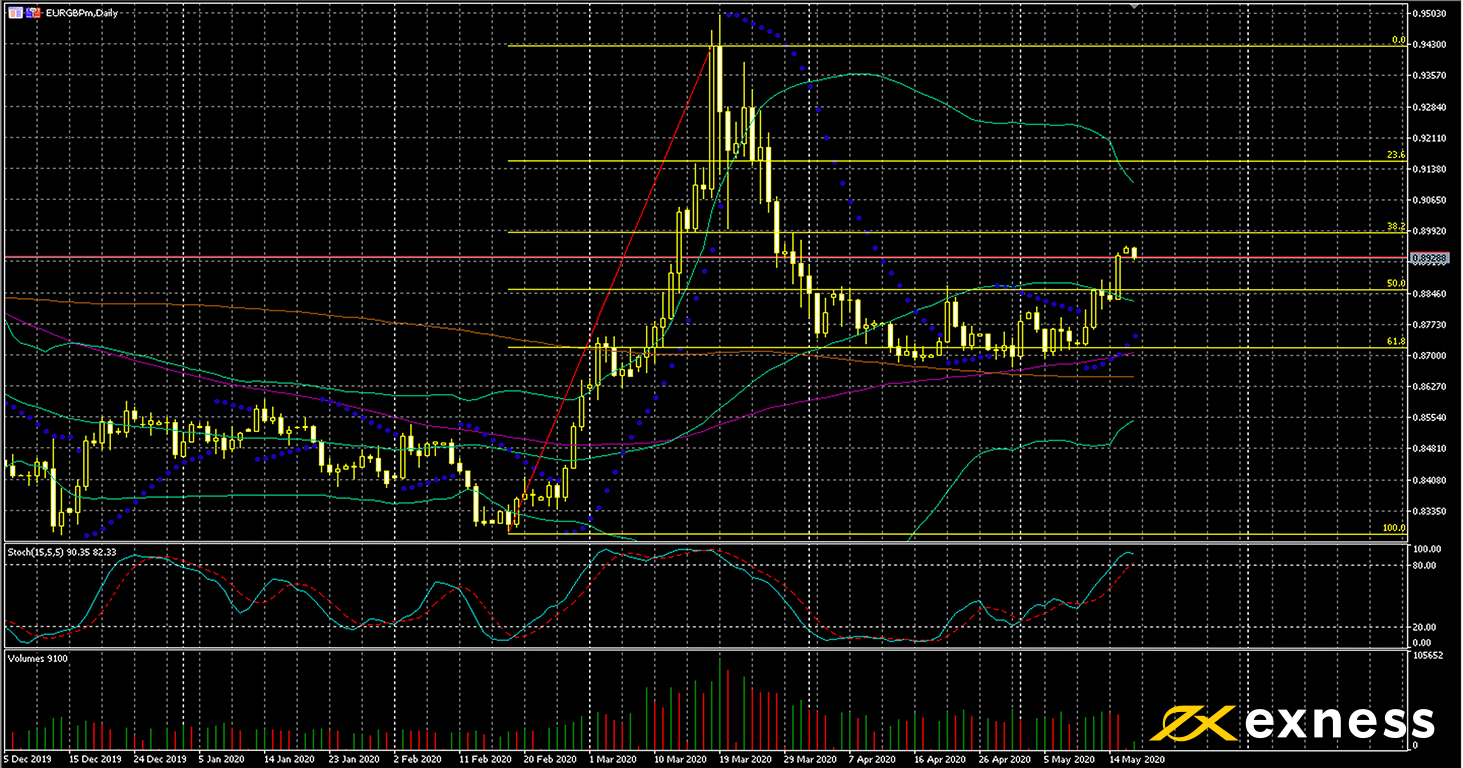 The upside seems to be reforming on this longer-term chart of the euro against the pound as the recovery for the UK is expected to be significantly more difficult than that of the EU. Click on the image to magnify. A number of European countries have now lifted their restrictions on short selling shares and most major indices are up about 2% so far today. Tomorrow’s claimant count change is likely to be critical for this symbol.

TA suggests some positivity here with all three SMAs continuing to print above each other. The 100 SMA completed a weak golden cross at the end of last month. On the other hand, the slow stochastic gives a clear overbought signal. The pound could easily make gains here if tomorrow’s data turn out to be less bad than expected. 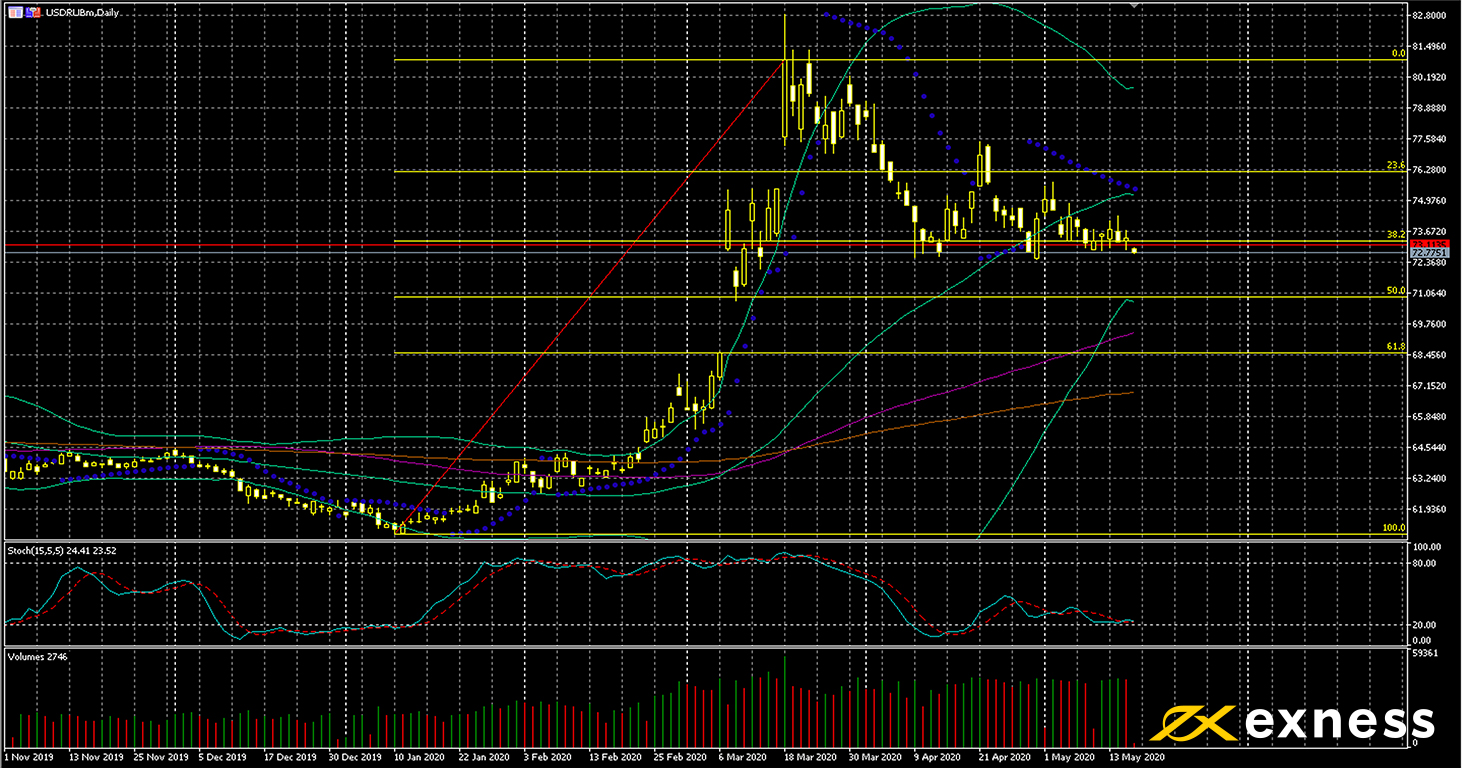 The ruble has recovered to a limited extent against the dollar so far this month as oil has moved up. Click on the image to magnify. Although the outlook for the real economy in the USA continues to deteriorate, Russia doesn’t seem to have reached a peak of covid-19 infections yet. If the virus comes clearly under control in the latter and oil holds on to its recent gains, one would expect USD–RUB to move down a bit more.

The 38.2% Fibonacci retracement area appears to be a key support which price is currently testing. While the slow stochastic is close to oversold at 25, there is no clear indication yet of saturation from either this or Bands. Volume remains basically consistent with that in March and April so far this month.

In the absence of any key data from the USA this week, traders’ focus is likely to be on tomorrow’s GDP release from Russia. Although only preliminary, this might give an indication on the possible outlook for the Russian economy and so the ruble over the next few weeks. Thursday’s industrial data might also be important; if a full 10% is shed, there would probably be some negativity on the ruble in at least the short term.