Weekly data preview: RBA and BoC in focus ahead of the NFP

Weekly data preview: RBA and BoC in focus ahead of the NFP

Various ‘risk-on’ instruments recovered in this morning’s Asian session as well as the European session so far. Panic over the spread of COVID-19 outside China has subsided to a degree since today’s open. The prospect of greater stimulus this year from central banks and governments in east Asia also gave a boost to some shares.

There wasn’t much relevant activity among central banks last week. The Bank of Korea left its base rate on hold at 1.25% against expectations of a cut to 1%. This week’s meetings of the RBA tomorrow morning and the BoC on Wednesday afternoon are likely to be crucial for AUD and CAD.

Annual and fourth quarter GDP growth is due from Switzerland, the Czech Republic and South Africa tomorrow. Australia and Italy both release GDP data on Wednesday. Friday’s a bumper day of data to end the week, with all the usual employment figures from Canada and the USA, most importantly the NFP, plus balance of trade from both countries. 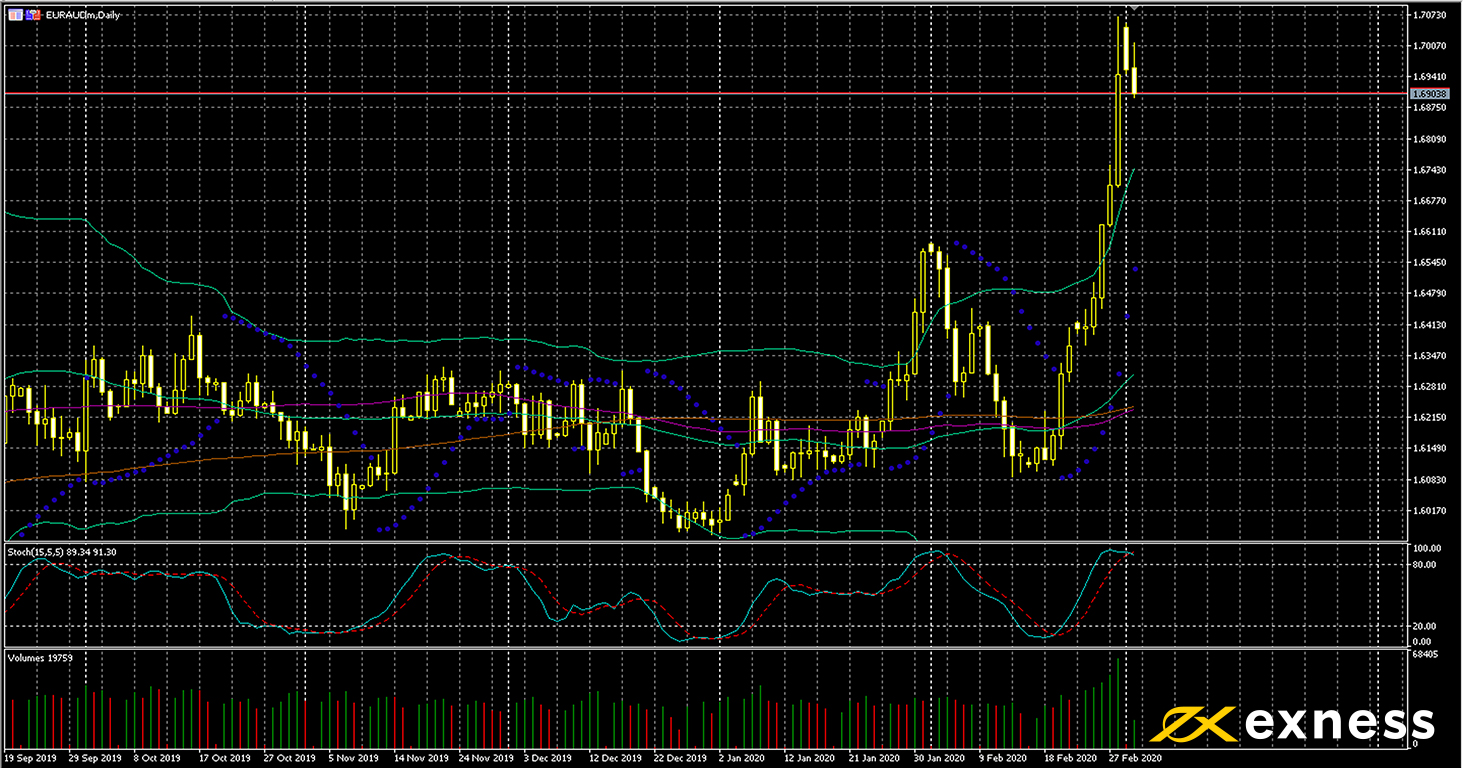 EUR–AUD has shot up quite dramatically since about the middle of February. Although COVID-19 and its effects on Chinese demand for Australian products of mining is a key factor, the catalyst was worse data from Australia last month. Most importantly, employment data on 20 February was weaker than expected. Australian PMIs (manufacturing and services) were also worse the next day, indicating contraction in February. Friday’s employment data from Germany meanwhile was pretty strong, with unemployment declining by about 10,000.

From a technical point of view, this would be a risky place to buy in. There’s clear buying saturation here, with price closing four successive days outside the upper deviation of Bollinger Bands (50, 0, 2); this is very unusual for a widely traded pair like EUR–AUD. It looks like today’s close will also be outside Bands. For short-term traders, tomorrow’s meeting of the RBA is a key event among other important releases this week. Those considering the long term though will probably wait until price emerges from overbought before buying in. 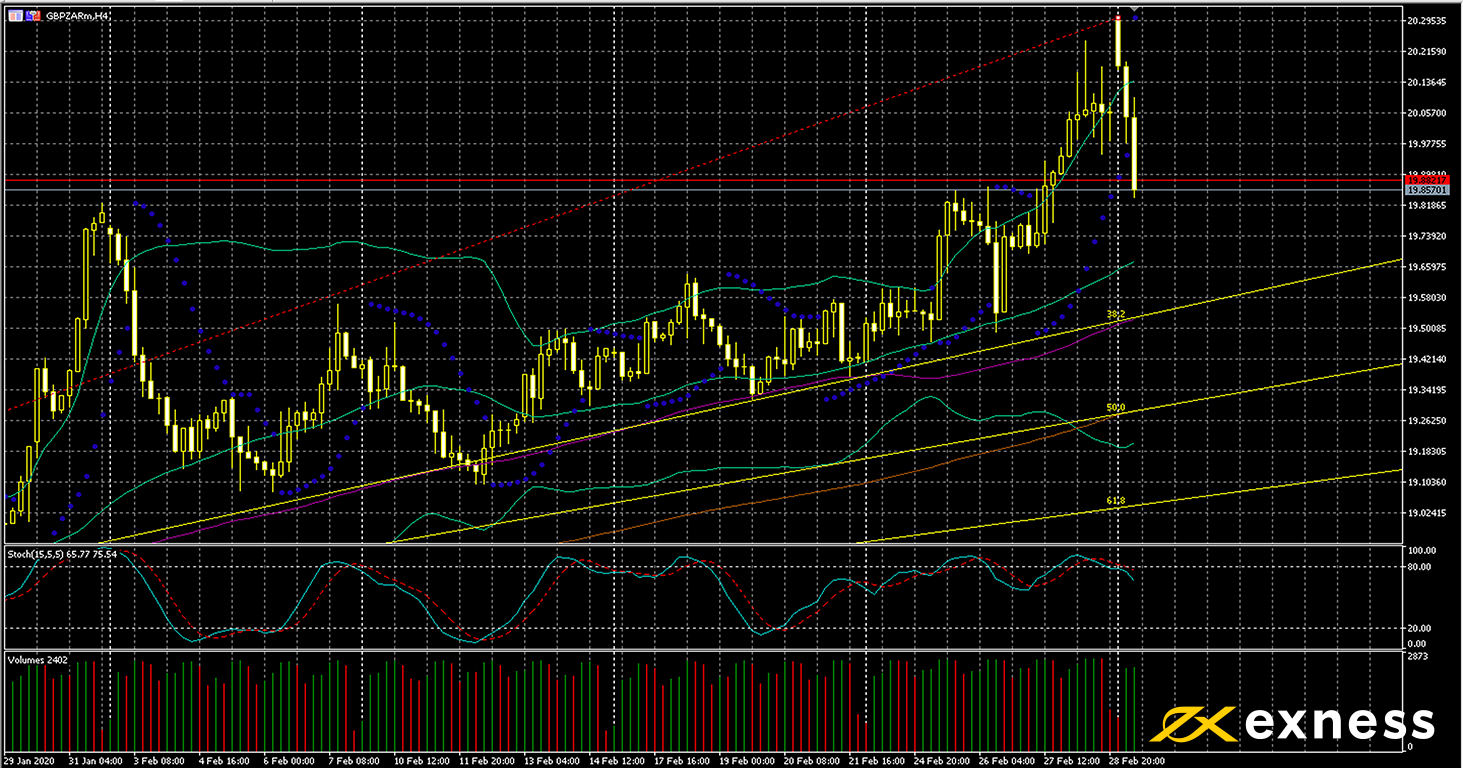 The rand has recovered to some degree against the pound so far this week, a function fundamentally of the return of some calm to markets in Asia. Recent data from South Africa has generally been quite strong, or at least not as bad as expected. Balance of trade from South Africa on Friday afternoon wasn’t nearly as weak as the consensus of negative R14 billion.

GBP–ZAR has emerged from overbought as of the second period this morning, having already completed a downward crossover of the slow stochastic (15, 5, 5) on Friday night GMT. Moving averages continue to indicate a buy signal, but short-term traders here are likely to target the 38.2% area from the daily Fibonacci fan to the downside. Whether longer term traders might buy in again from the current areas is likely to depend on tomorrow’s GDP release from South Africa. 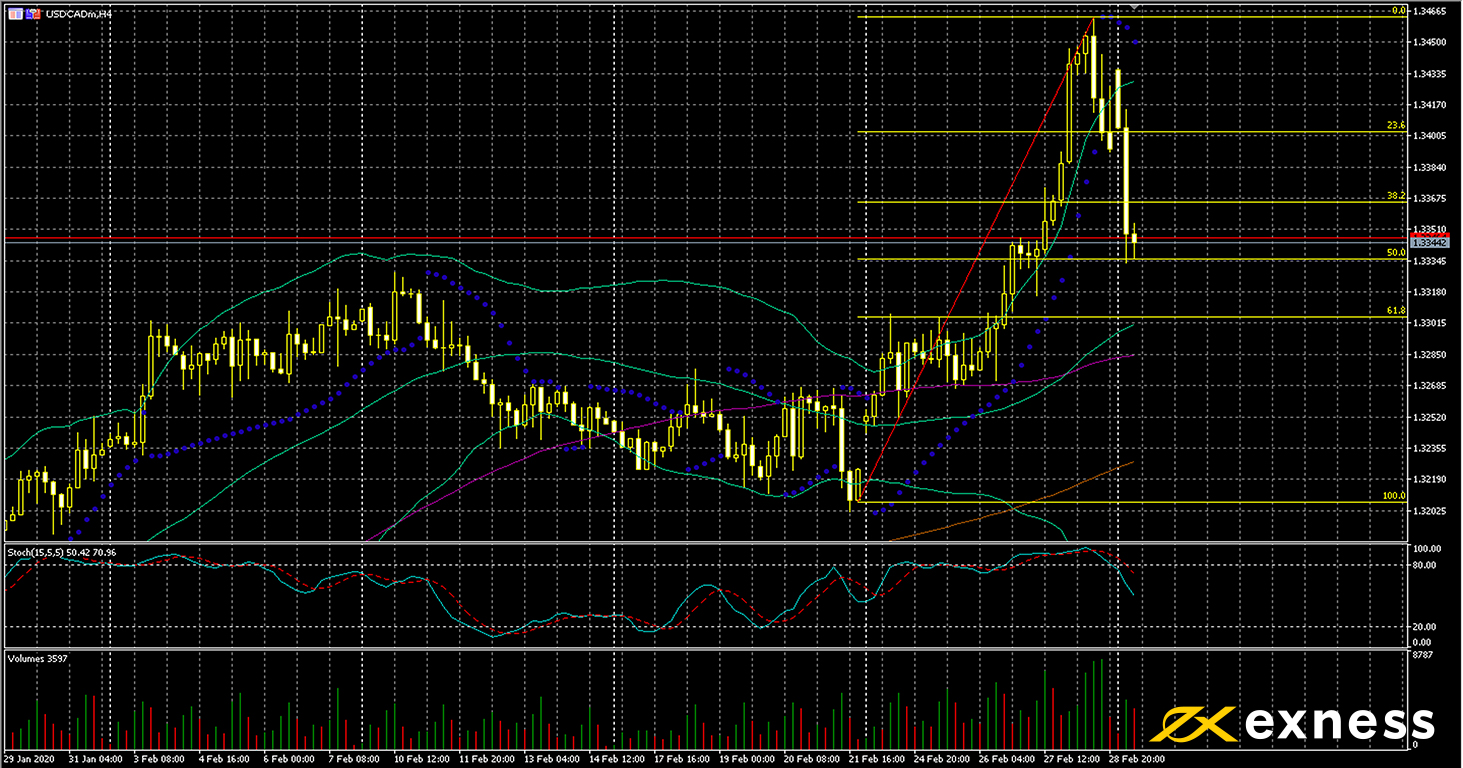 USD–CAD has declined strongly from recent highs since Friday night as oil has recovered from its latest lows. There weren’t really any surprises from last week’s data for either currency. This Friday with its large volume of data from both countries could be a turning point.

Some movement upward this week might occur based on the chart. MAs continue to give a strong buy signal, with the 50 SMA from Bands and the 100 completing a golden cross at the end of last week. Buying volume also increased significantly at the end of last week. Behaviour around the area of the 61.8% Fibonacci retracement and the 50 SMA might determine further direction. Nonetheless, many traders will want to wait for Friday’s data.

Thank you for reading Exness Education’s weekly data preview! Please join us again throughout the week as we analyse bitcoin plus the most active forex instruments and commodities.