Various shares and indices in Asia and Europe started the week a bit better, with some major economies in Europe now planning to extend easing of their lockdowns. The biggest events for financial markets this week are the meetings of the Fed and the ECB. Exness Education’s weekly data preview looks at how the week’s biggest releases might affect some of the most popular CFD instruments.

The Bank of Japan met in the early morning GMT today, leaving rates unchanged as expected but announcing a large expansion of its current monetary stimulus. The three significant meetings last week of the PBoC, CBRT and CBRF all resulted in cuts to rates, the biggest being the CBRT’s cut of 1%.

Central banks’ activities this week are dominated by the meeting of the FOMC on Wednesday night and the ECB on Thursday afternoon GMT. Many traders are also looking ahead to decisions on rates from the Riksbank and the Magyar Nemzeti Bank tomorrow. In regular economic data, this week’s most important releases include GDP from the USA, France and Italy, among others. 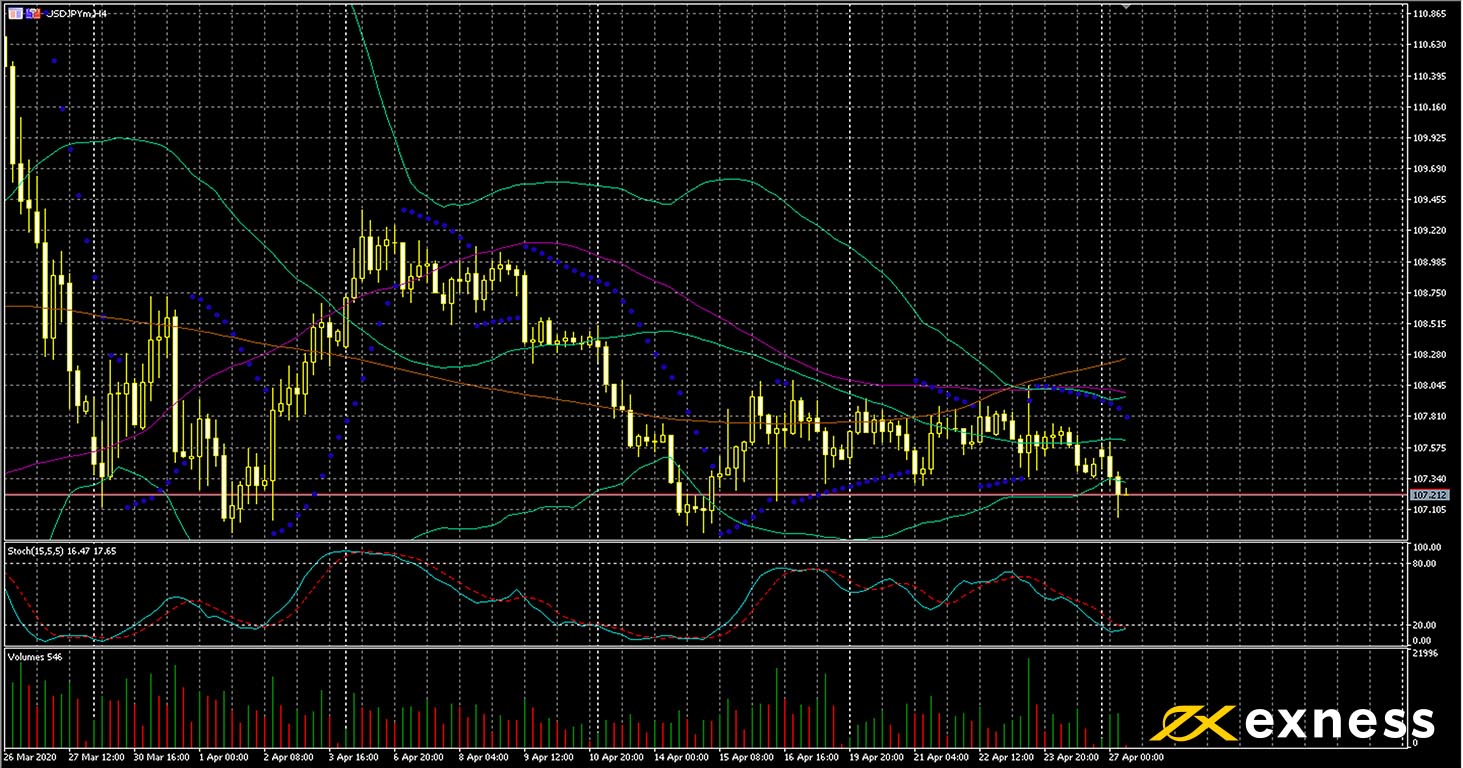 USD–JPY remains on the back foot so far this week, with markets interpreting the latest measures by the BoJ positively it seems. Click on the image to magnify. Japan’s central bank announced the removal of the previous limitation on buying government bonds and an increase in its buying of corporate debt, now up to ¥20 trillion (from ¥7 trillion previously). Japan remains one of the relatively less affected major economies from covid-19 while the situation in the USA is still critical.

From a technical point of view, it’s not yet clear when a breakout from the current range might occur or indeed to which direction this might be. Buying volume has spiked on several occasions in April but so far there hasn’t been any clear move back above the key psychological area of ¥108. The slow stochastic at 17 remains within the zone of selling saturation.

Wednesday is the big day this week for dollar-yen, with advance quarterly GDP data from the USA coming ahead of the FOMC’s meeting. Very poor data is already priced in but how the Fed interprets the figures might be key for ongoing direction in the latter part of the week. 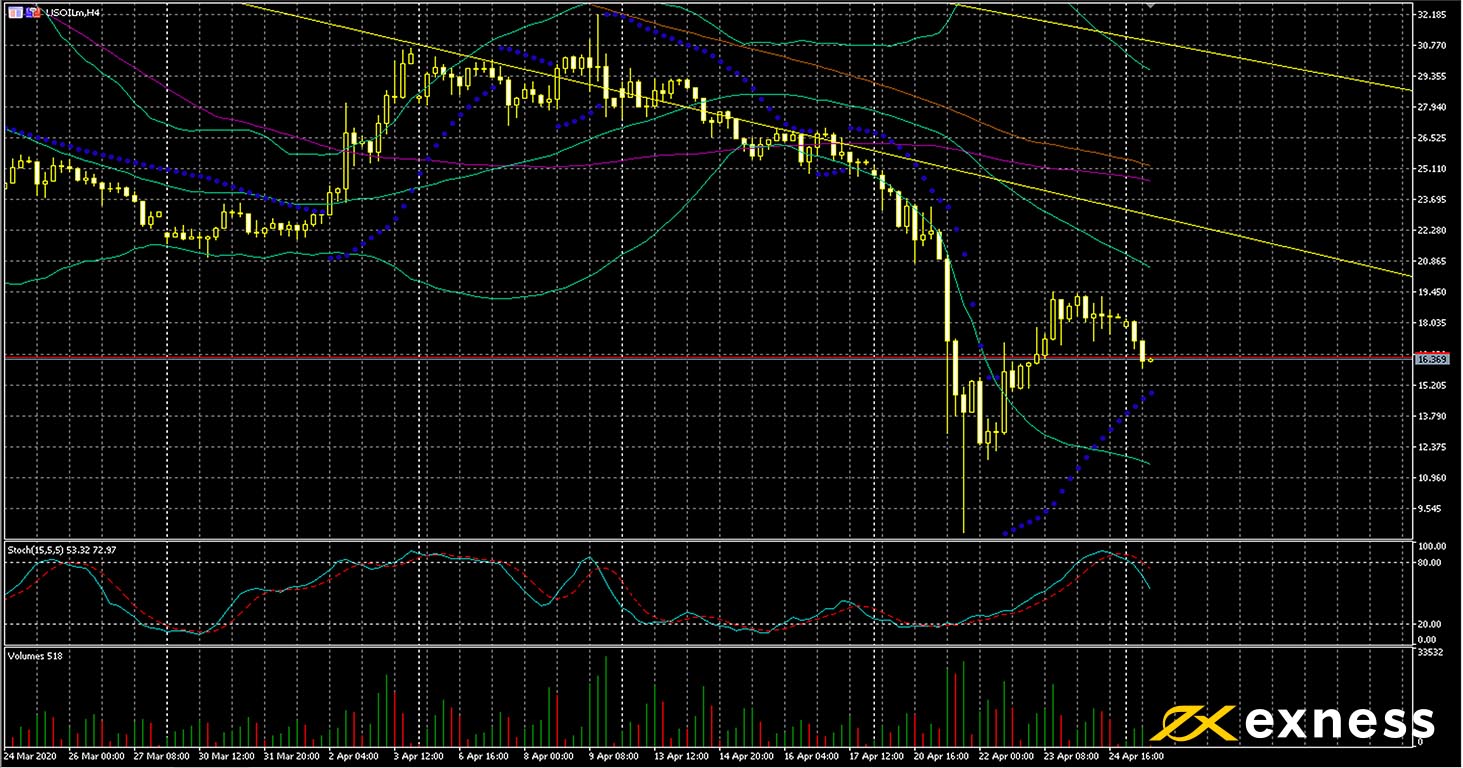 Oil futures touched negative prices for the first time in history early last week, with spot CFDs on USOIL reflecting this development. Click on the image to magnify. The key factor remains the ongoing collapse in demand for crude oil around the world and the sluggish response of many producers to this. The main questions for the fundamentals of crude now are how quickly the remaining producers can (at least) scale production down dramatically and, perhaps more importantly, to what extent more countries will start relaxing their lockdowns over the next few weeks.

Repeated testing of the 38.2% area of the Fibonacci fan in the first half of April has now decisively failed, so from a technical point of view the picture is very negative. The latest lows below $10 were the lowest prices ever recorded for spot CFDs on USOIL. This week’s regular stock data will probably provide more impetus either for the current retracement upward or more losses and a possible retest of $9.50. 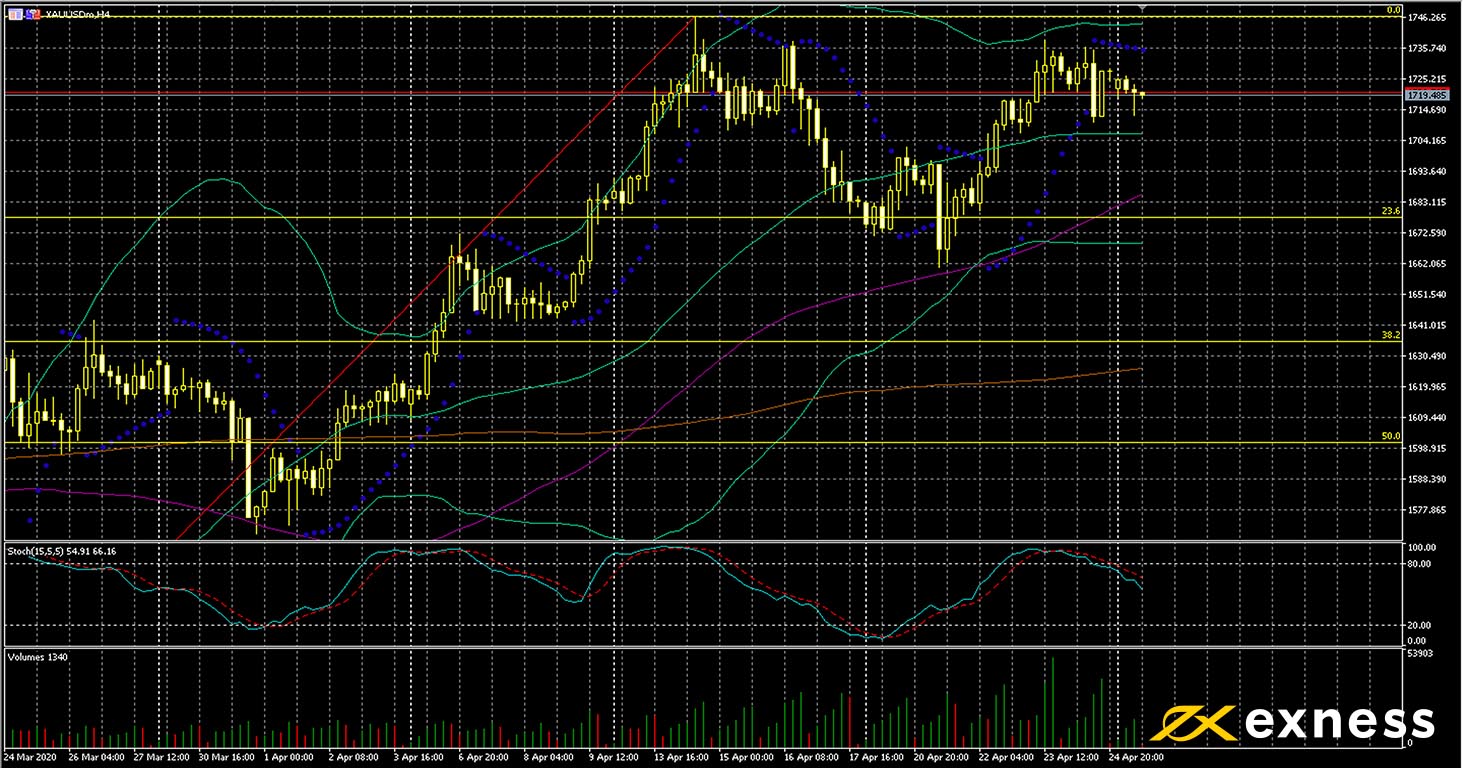 Being another haven, the general picture for XAU–USD is fairly similar to USD–JPY. Click on the image to magnify. The yellow metal has generally held its gains against most currencies as markets seem to expect more stimulus from central banks and still do not expect a quick recovery by shares and indices from recent selloffs. With interest rates around the world approaching zero or already there in many cases, the traditional yield-based reasons for eschewing gold are basically absent.

The clearest support to the downside in the short term is the psychological area of $1,700, which coincides fairly closely with the 50 SMA from Bands. Price has now moved out of overbought based on the slow stochastic, so another upward wave remains possible over the next week or so; buying volume is also extremely high compared with late March and early April. The Fed’s meeting on Wednesday night is the key event that might drive movement for gold this week.