Most indices have started the week on the back foot near Friday’s lows. Gold meanwhile remains strong above $1,770. Total deaths around the world from covid-19 hit half a million overnight, with 10 million total confirmed cases. A number of American states have reversed their decisions to reopen after a spike in the number of cases of the virus. Today’s weekly data preview takes a closer look at the key releases coming up for USDSEK, GBPAUD and EURCAD.

The main action among central banks last week came from Banxico which cut its benchmark rate to 5% on Thursday. This week’s only significant meeting is the Riksbank on Wednesday, with Sweden’s central bank expected to keep rates on hold at zero.

This week’s biggest release of regular data is the NFP, which unusually takes place on Thursday because the USA celebrates Independence Day on 4 July. Other key releases include British GDP growth tomorrow, Caixin manufacturing PMI on Wednesday and Australian, Canadian and American balances of trade on Thursday. 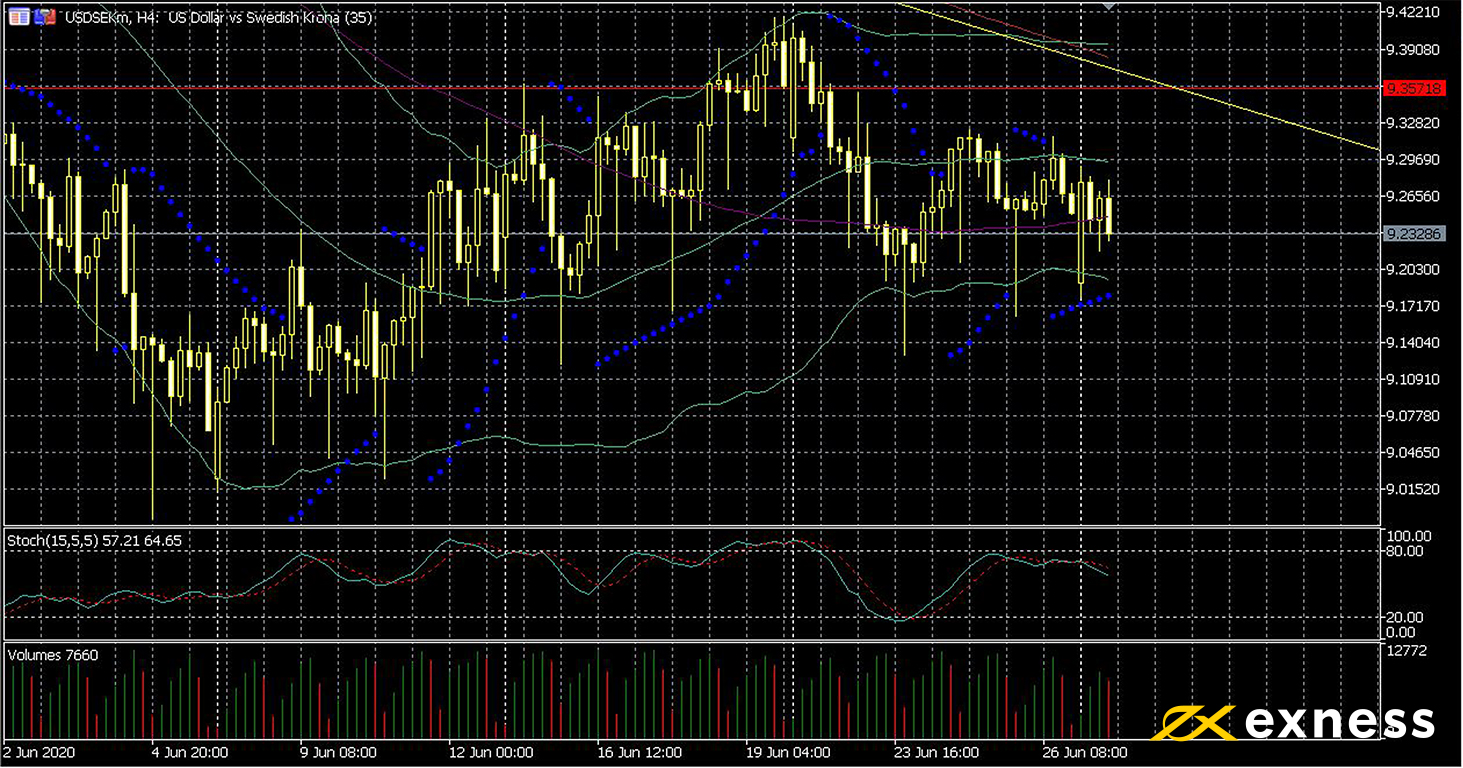 The current situation of resurging numbers of covid infections in the USA is one of the main fundamental factors driving the dollar down. The krona meanwhile has a degree of support from Sweden’s generally competent handling of the crisis and relatively high prices of Sweden’s main exports such as timber and iron ore. Regular data from Sweden recently has mostly been somewhat positive. Despite this morning’s weaker trade balance, Friday’s figures indicated unexpected growth in both monthly and annual retail sales.

Technical analysis suggests that a strong support exists just above 9 kr. We can also observe the golden cross of the 50 and 100 SMAs on 19 June. Short-term selling pressure remains high, but the overall volume of buying is much higher. In the absence of any overbought signals, more gains might be expected in the runup to the Riksbank’s meeting and the NFP. If the reaction to these is negative and positive respectively, the 38.2% zone from the Fibonacci fan could be the next important resistance. 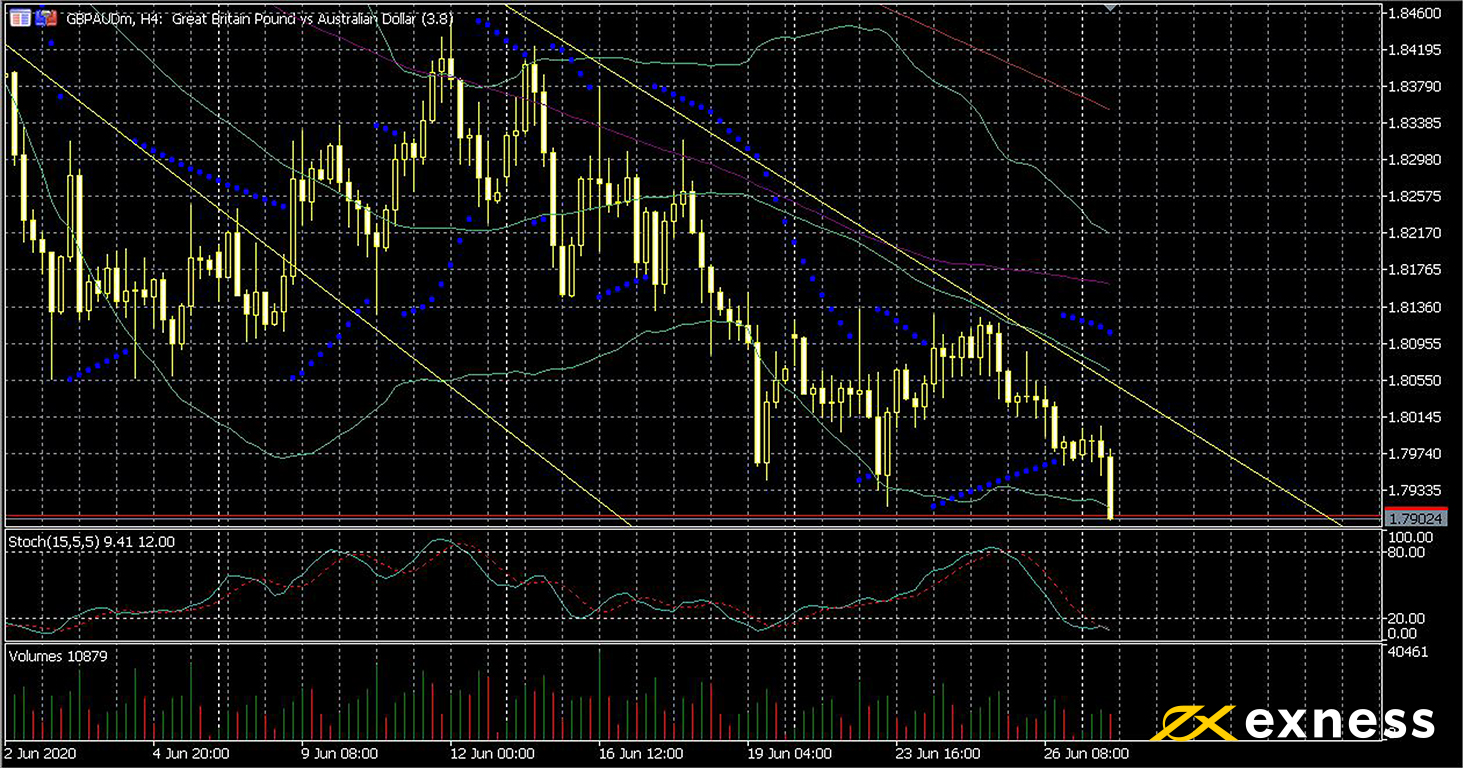 The pound has now lost about 20% of its value against the Australian dollar based on mid-January’s high. Among the most important factors weighing on the pound is the ongoing Brexit talks, specifically the likelihood of an Australian style trade deal if the talks fail, which would be little different from no trade deal in practical terms. The increase in recent infections in Leicester has also dented sentiment again as to the British government’s handling of covid-19. In Australia, though, Prime Minister Scott Morrison’s projections for economic growth are being intensively questioned by leading economists.

The picture from TA is very negative. GBPAUD reached a fresh 10-month low this morning GMT at A$1.79. The 50 SMA from Bands has extended the gap again with the 100 today; it seems that the recent test of the 38.2% daily Fibonacci fan has failed for now. On the other hand, this symbol is clearly oversold based on both Bollinger Bands and the slow stochastic. The key releases this week are British GDP tomorrow morning and Australian balance of trade early on Thursday, but Thursday night’s Gfk consumer confidence could also be important. 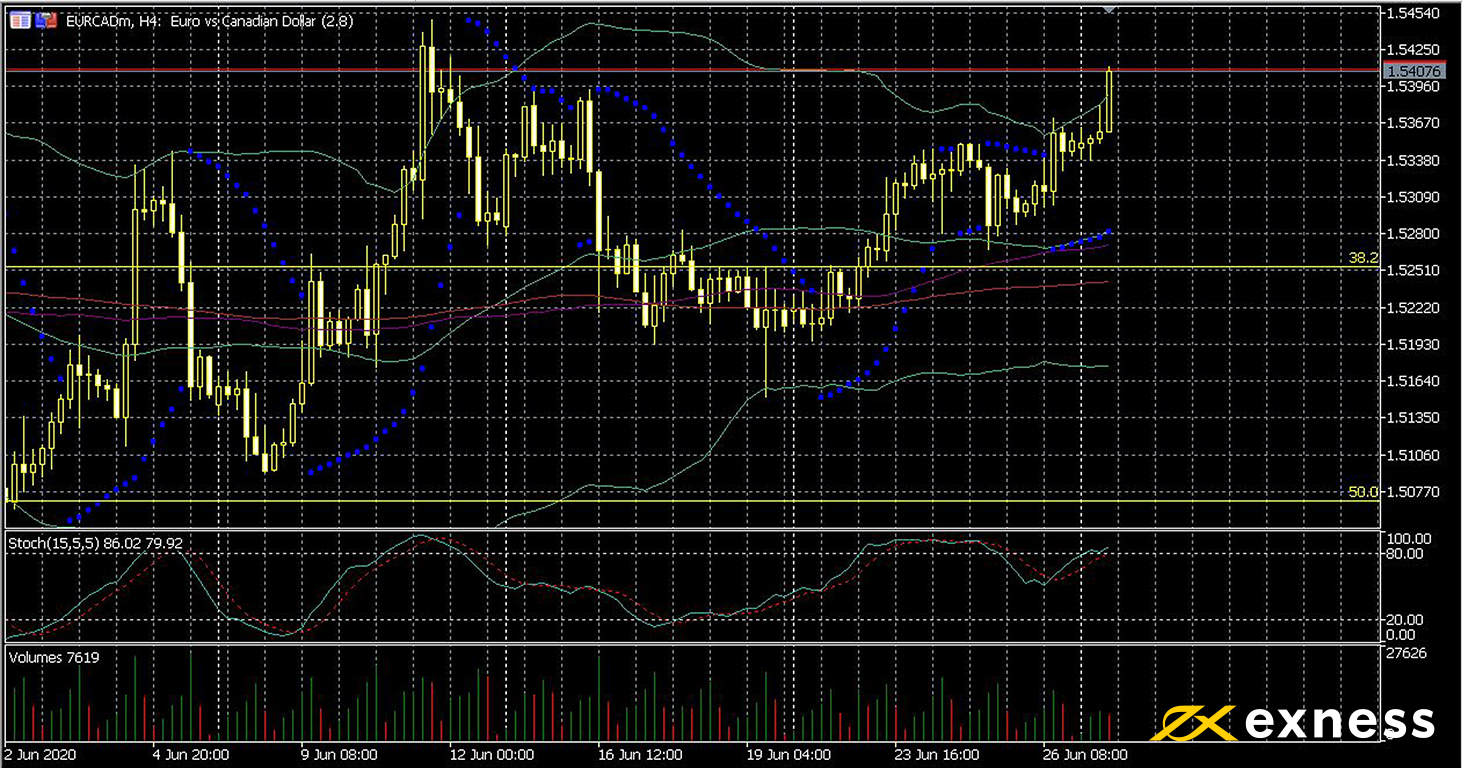 The euro has made some gains in many of its pairs over the last week or so as easing of European lockdowns increasingly appears not to have been premature. Meanwhile the ECB’s President Christine Lagarde believes that the eurozone is over the worst of the economic hit from the coronavirus. The loonie on the other hand has faced some headwinds as a result of oil’s relatively deep retracement.

Today’s gains appear to be an overextension. Price is overbought based on the movement outside the upper deviation of Bollinger Bands, and the slow stochastic at 86 also indicates overbought. The key resistance slightly below C$1.55 is approaching – this is the area of the 23.6% daily Fibonacci retracement. Declining average volume also suggests that a breakout here is unfavourable. That said, changing fundamentals like surprising data could change this impression, with the most important release being Canadian balance of trade on Thursday.