Early data today from China, the UK, Germany and various other countries around the world indicated better than expected manufacturing performance in July. The key events for forex markets this week are the meetings of the RBA and BoE ahead of Friday’s NFP. This weekly data preview takes a closer look at cable, EURAUD and CADJPY.

Stock markets have generally not moved much so far today. Positivity from data has been balanced with a record daily number of new cases of covid-19 around the world, over 300,000. Gold briefly reached a new all-time high at $1,985 shortly after this morning’s open but has now retreated somewhat below $1,970. Oil meanwhile has been pretty static so far this week with Brent continuing to hover around $43.50.

Two major and two minor central banks meet this week, with the focus of traders likely to be on comments about quantitative easing and economic outlooks to the end of the year. Firstly the Reserve Bank of Australia meets early tomorrow morning GMT, then the Bank of Thailand on Wednesday and the Bank of England and the Czech National Bank on Thursday.

The most important regular data this week include balance of trade from various countries tomorrow, Wednesday and Friday. Focus remains on Friday’s NFP though for gold and pairs with the dollar. 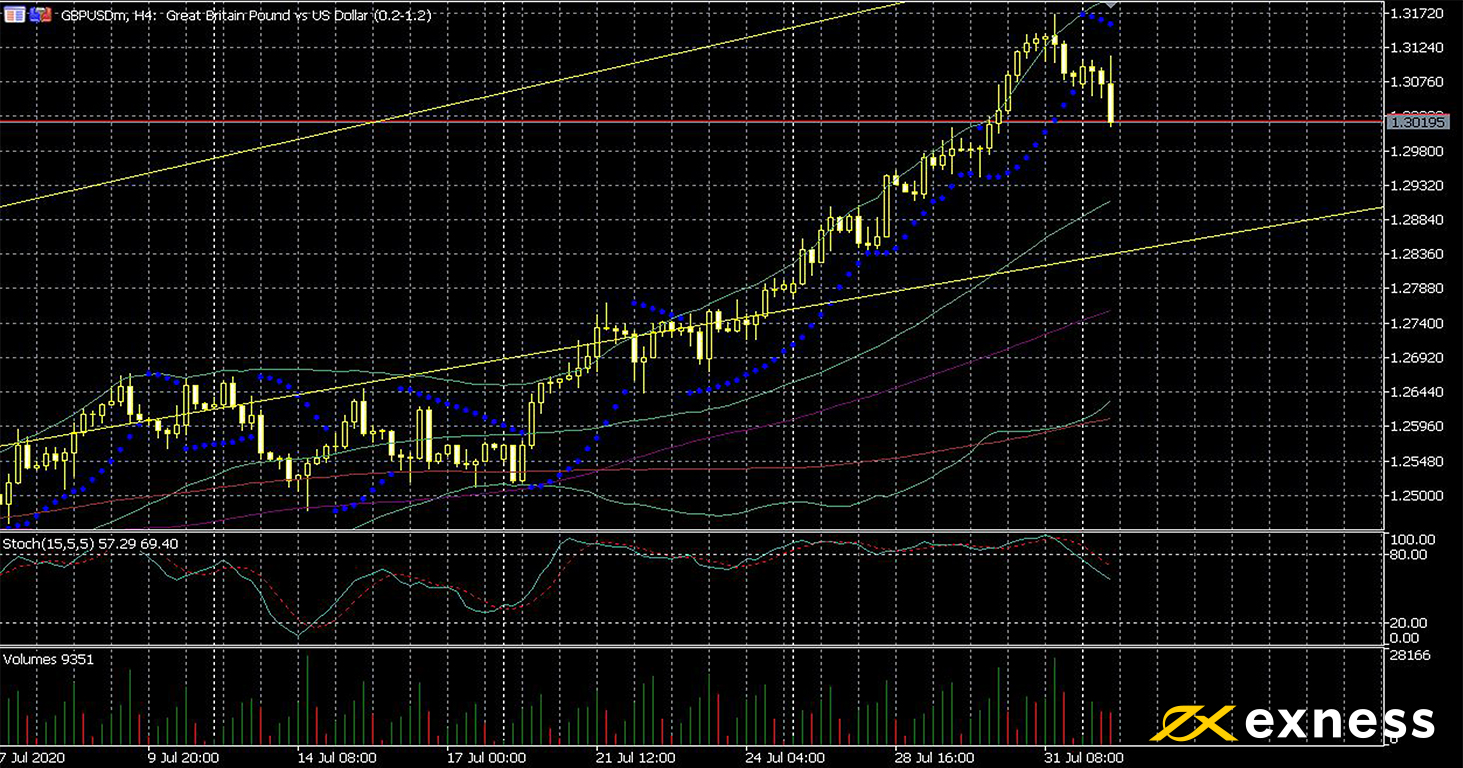 July was the pound’s best month against the dollar in a decade, with sterling rising as the greenback sold off in many of its pairs. While the fear of a second wave of covid-19 in the UK remains and local lockdowns continue, the rate of transmission in the UK is generally lower than that in the USA and investors’ confidence remains comparatively high. This morning’s strong Markit manufacturing PMI was the highest since March 2019; the output component at 59.3 indicated the biggest monthly growth in British manufacturing for about three years.

The technical picture looks strong, with the current retracement having the potential to confirm the health of the trend. Cable has now moved out of overbought based on both Bollinger Bands (50, 0, 2) and the slow stochastic (15, 5, 5). Buying volume remains high since the middle of last week. The next area of importance is likely to be the zone between the 50 SMA from Bands and the 61.8% area of the daily Fibonacci fan. However, we can reasonably expect lower volume this week as traders await the BoE’s meeting on Thursday and the NFP on Friday afternoon. 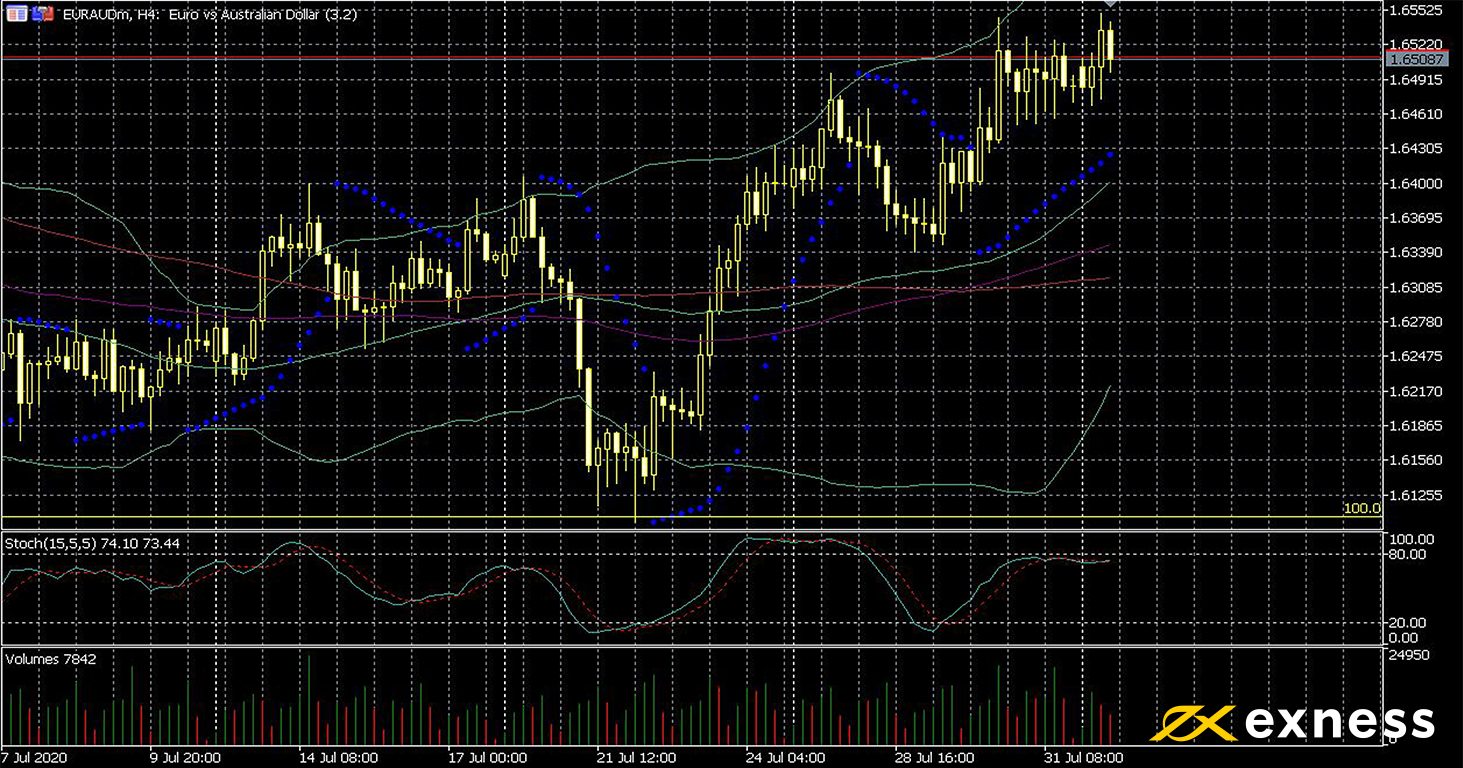 The euro has continued to move up against the Australian dollar since last week, with one of the main reasons fundamentally being higher local rates of infection in Australia. The outlook for Australia remains strong given that the prices of various commodities are holding near annual highs in most cases. Governments are providing more stimulus in the eurozone, though, with the recent agreement among leaders of EU nations to provide an aid package to struggling southern countries giving the euro a boost in some of its pairs.

Seemingly the key catalyst for the euro’s latest gains here was the test of the 100% zone of daily Fibonacci retracement, i.e. a complete retracement of the common currency’s gains against the Aussie dollar since March. There’s no clear resistance on this timeframe. With moving averages having flipped to positive now – last week featured two golden crosses – some more gains might be expected this week. The key releases that could alter the technical picture are Australian balance of trade and the RBA’s meeting tomorrow morning plus German balance of trade on Friday. 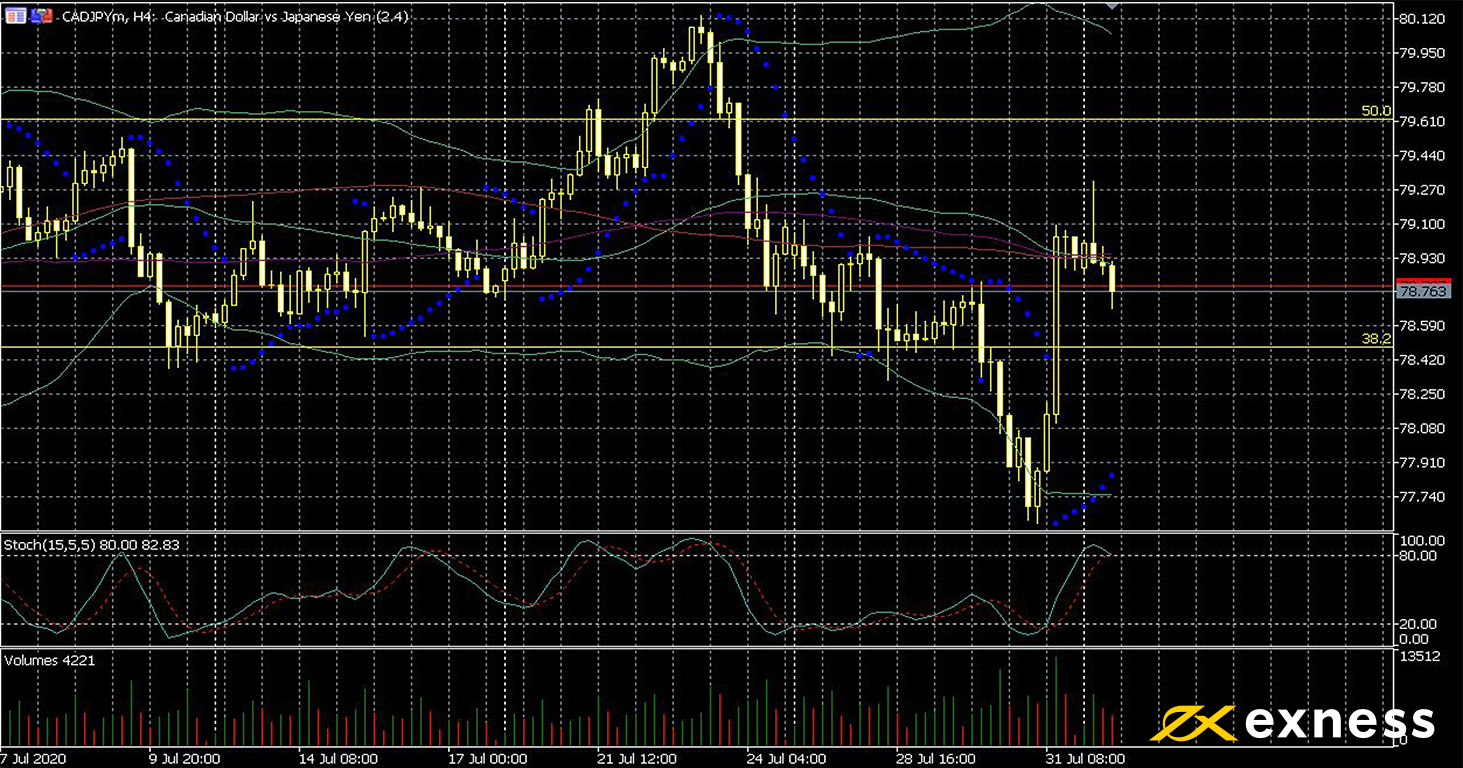 Canada’s economy has bounced back fairly well on the whole so far from the initial phase of the current crisis. However, GDP remains about 15% below where it was in February before covid-19 started to hit the country. American light oil remaining generally steady around $41 has given some support to the loonie recently. The yen’s strength last week came mainly as the Nikkei 225 fell fairly sharply to test two-month lows – the inverse correlation between these two remains strong.

CADJPY has been moving in a generally clear channel between the 50% and 38.2% daily Fibonacci retracement areas over about the last six weeks. So far there’s been no sustained movement beyond either of these areas. Buying volume increased significantly at the end of last week and the loonie also moved into overbought.

The main release this week set to interact with this chart is Wednesday’s balance of trade from Canada. Ivey PMI on Friday night will also probably be key, though. Volatility is expected to be high for every pair with CAD on Friday from 12.30 GMT as Canada releases a range of job data at the same time as the USA’s non-farm payrolls.