Weekly data preview: more volatility likely ahead of the NFP

Weekly data preview: more volatility likely ahead of the NFP

Asian shares and indices started the week without much direction, but European shares retreated as markets prepare for what’s expected to be another volatile week. Crude oil and gold are basically unchanged so far today from where they ended on Friday. This week’s key data is non-farm payrolls on Friday afternoon GMT. Exness Education’s weekly data preview gives you a rundown of the releases likely to have a significant impact on markets.

The death toll from covid-19 has now passed 30,000 around the world according to the World Health Organisation, with the total number of cases more than 638.000. Many countries like the UK seem set to extend their lockdowns, some for more than a month. Initial expectations of a fairly swift economic recovery after the immediate crisis have dissipated.

Despite most central banks having slashed rates this month, there was still considerable activity among them last week. Most notably, the Bank of Canada cut its target overnight rate by half a percent to 0.25%. The Czech National Bank also cut its repo rate by 0.75% to 1%.

There are no scheduled meetings of major central banks this week, but what members of various monetary policy committees say about their countries’ economies is likely to remain a key factor driving forex and equity markets. Apart from Friday’s NFP, the key regular data this week is on GDP in the UK and Russia plus balance of trade from Canada and the USA. 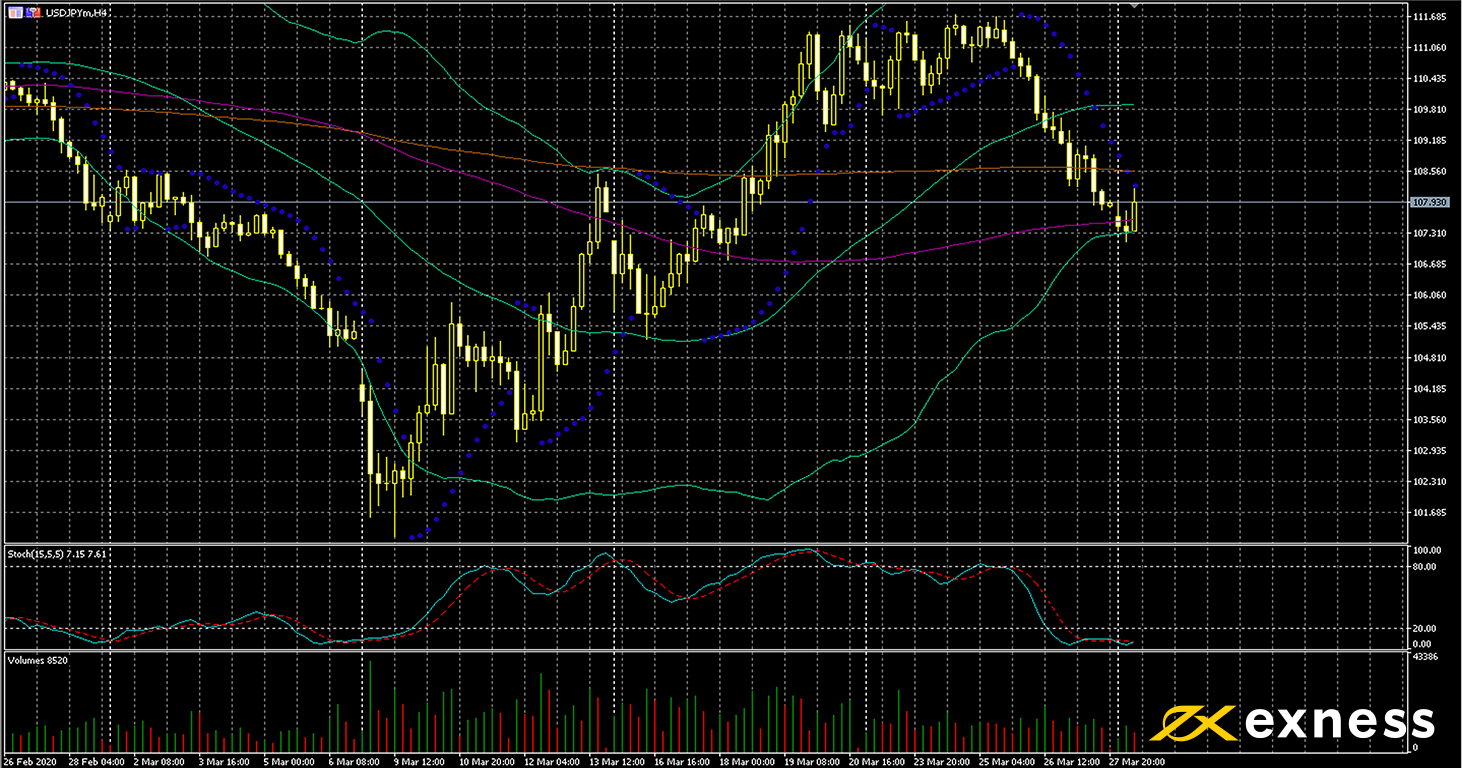 USD–JPY has posted a small gain in these opening hours of the week. Click on the image to magnify. This symbol’s fundamentals are basically unchanged from last week, with indices still performing poorly and risk-on very much in vogue as the spread of the virus and lockdowns in many countries continue.

Today’s early gains have been capped at around 108, suggesting that this psychological area could be an important resistance this week. This was previously a zone of support for this symbol before the current virus crisis began. The presence of price in the value area between the 100 and 200 SMAs might also suggest consolidation over the next few periods. Data this week will probably be very important for USD–JPY in addition to the news. 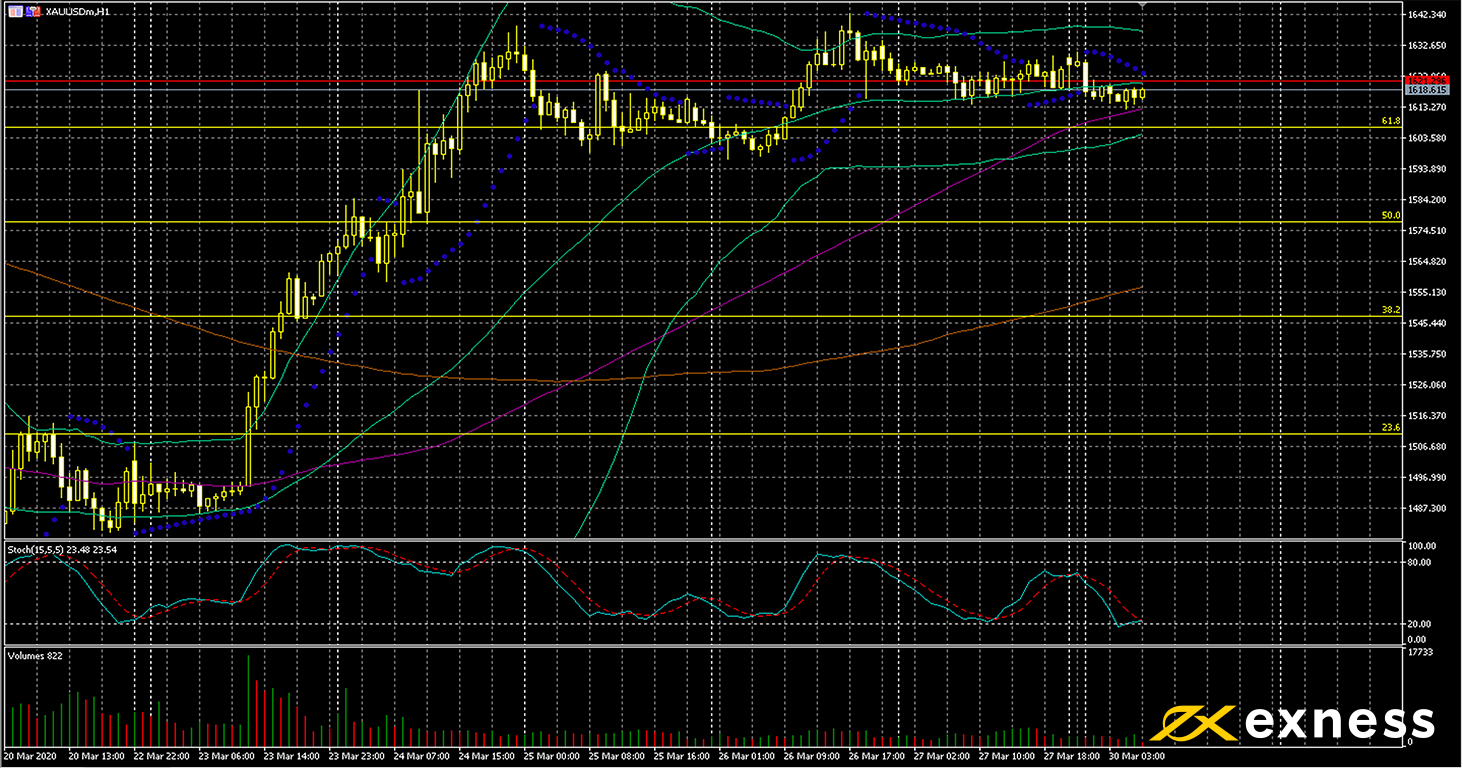 Gold has been mostly flat since the middle of last week in the absence of renewed major panic and the inability of investors in the physical metal to buy it during quarantines. Click on the image to magnify. Liquidity for XAU–USD has generally improved over the last few sessions, though. This week’s key event is the NFP, but general news from stock markets and countries seriously affected by the coronavirus is likely to remain front and centre over the next few days.

The absence of any significant attempt to break beyond 1620-1630 could suggest that this area might be established as a resistance this week. The 61.8% Fibonacci retracement based on the daily chart is supporting price against the downside while also helping to cap upward movement. If there’s no clear direction before the NFP, one might expect the employment data to push prices one way or the other in the short term at least. 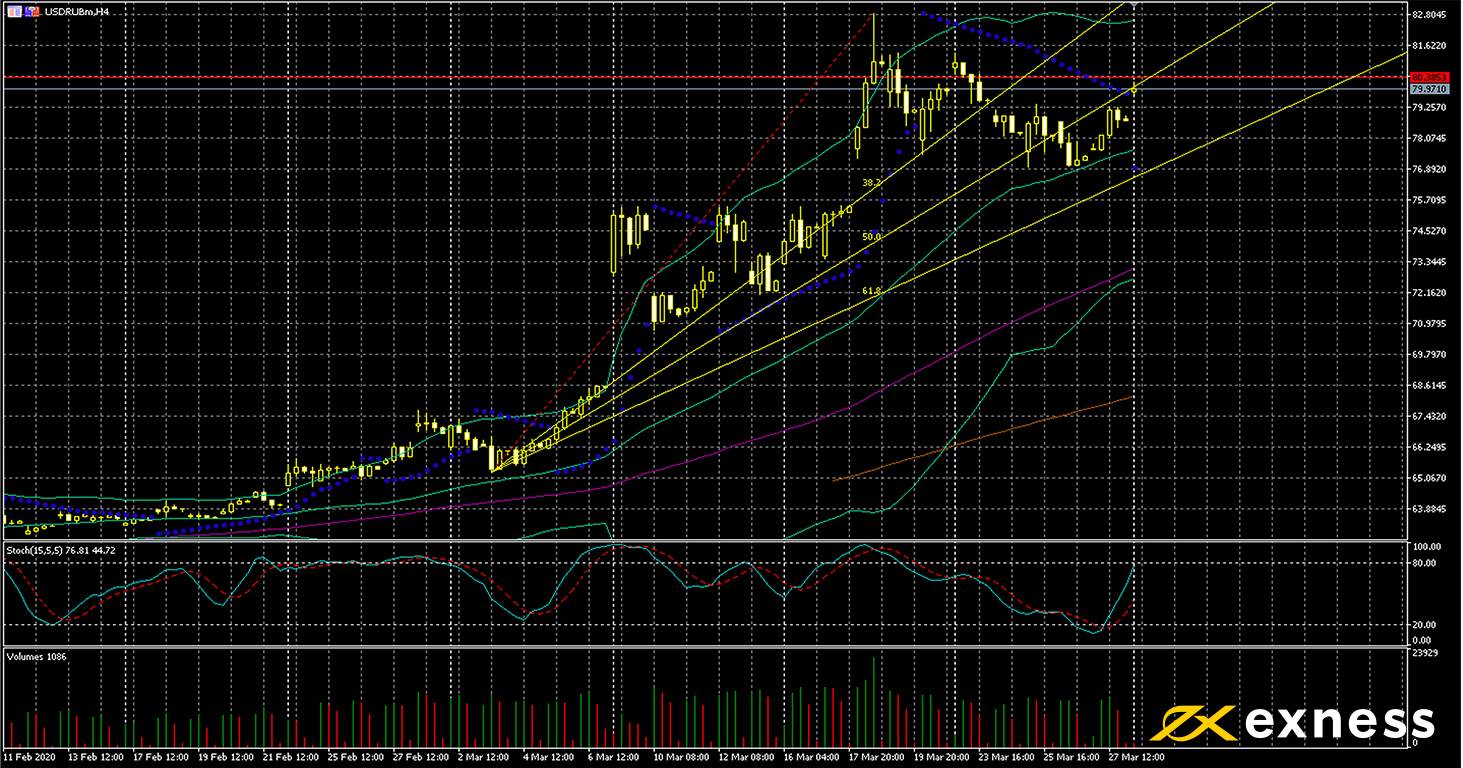 USD–RUB has been one of the most volatile forex pairs over the past few weeks due to the combination of covid-19 and the ongoing Russo-Saudi dispute over cutting production of oil. Click on the image to magnify. The failure of OPEC+ to agree even to extend the current cuts drove the Kingdom to begin the current ‘race to the bottom’ by producing more oil in an attempt to force Russia back to the table. The spread of the virus in Russia has also driven the ruble down.

Recent conditions make conventional technical analysis at least less useful than normal. However, the approximate area of 50% from the Fibonacci fan seems to be functioning as a support to a degree for the dollar’s runaway gains. Buying volume spiked two weeks ago, but since then there hasn’t been a clear signal that new highs could be tested soon. Exactly 80 is also a critically important psychological area, with recent quotes around 82 and 83 the highest in more than four years.

The NFP is crucial here as elsewhere for ongoing direction, but traders will also be monitoring oil and Wednesday’s GDP data from Russia. A further sharp fall in the prices of crude oil could lead to more strong gains here.

Thank you for reading Exness Education’s weekly data preview! Check back throughout the week for more analysis of the most active symbols.