Markets were overall somewhat less chaotic last week, with a range of both cyclical and defensive shares making some gains in the USA. Oil also moved up at the end of last week. Friday’s NFP though was much worse than the consensus expectation, with the USA shedding around 700,000 jobs in the period covered in March. Exness Education’s weekly data preview highlights some of the key releases expected this week.

Central banks weren’t especially active last week, but this is mainly because most of them have already cut to near-zero rates. This week’s most important meeting is the Reserve Bank of Australia tomorrow morning. The National Bank of Poland is expected to cut rates on Wednesday morning. The Bank of Israel also meets this afternoon at 13.00 GMT; the consensus suggests that the BoI will cut its benchmark rate to 0.18%

Some of the most important data this week are annual inflation and core inflation from the USA on Friday. Canada also releases a large volume of employment data on Thursday plus Ivey PMI tomorrow afternoon. Rounding off the key releases are balance of trade from Germany and the UK on Thursday morning. 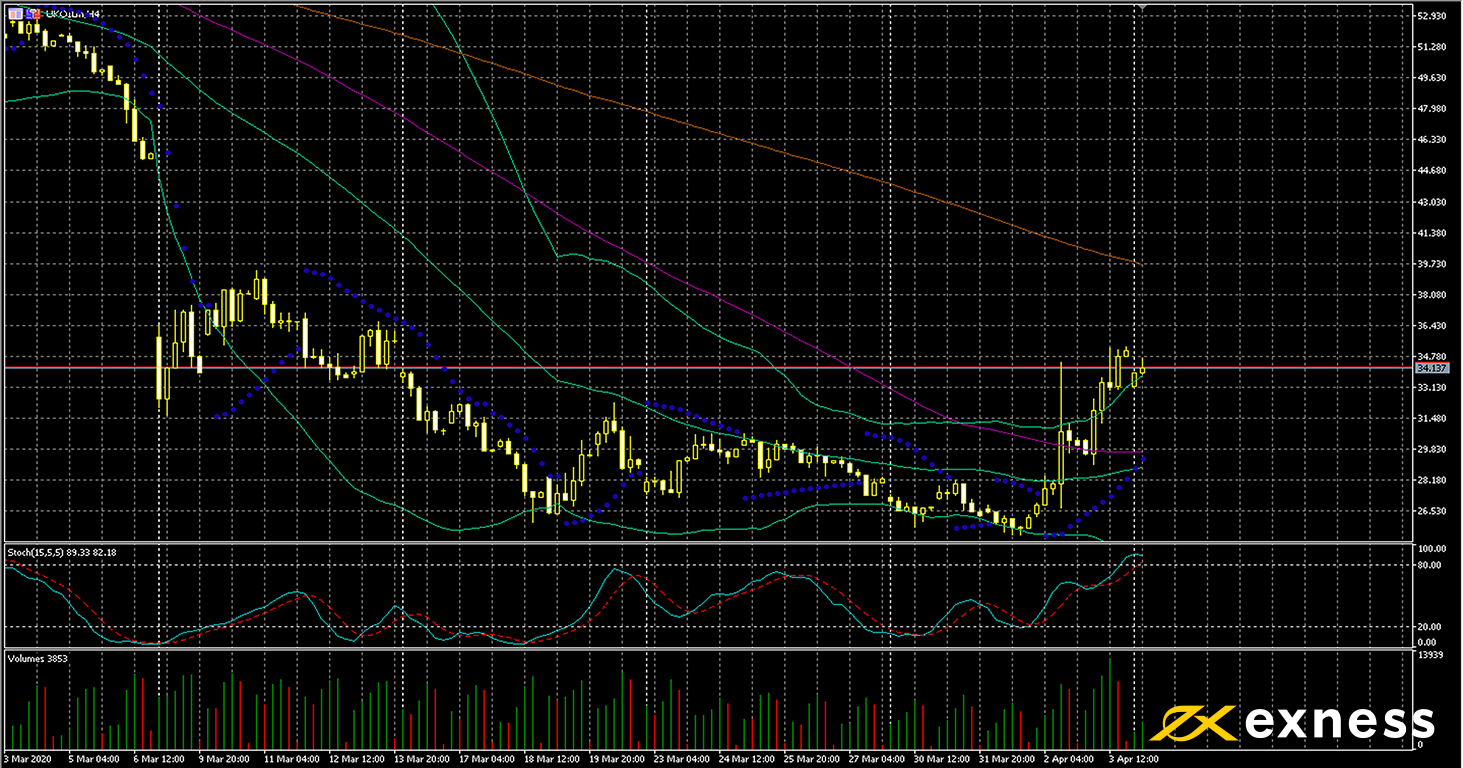 Oil experienced one of its most volatile weeks in recent history, with rumours of a deal to cut production between Russia and Saudi Arabia gaining traction. Click on the image to magnify. Donald Trump asserted on Thursday that the two were very close to a deal, but it’s clear that any such agreement is still some distance from completion. The chances of a return to some semblance of normal for OPEC+ are likely to be dominant among fundamental factors this week.

The current situation of elevated volatility is reflected very prominently on the chart here. Buying volume increased sharply in the second half of last week and price has now moved into overbought based on both the slow stochastic and Bollinger Bands. There are likely to be short-term opportunities in both directions this week, but buyers should watch for overbought on this and lower timeframes. Regular stock data has the potential to drive more losses on Tuesday and Wednesday. 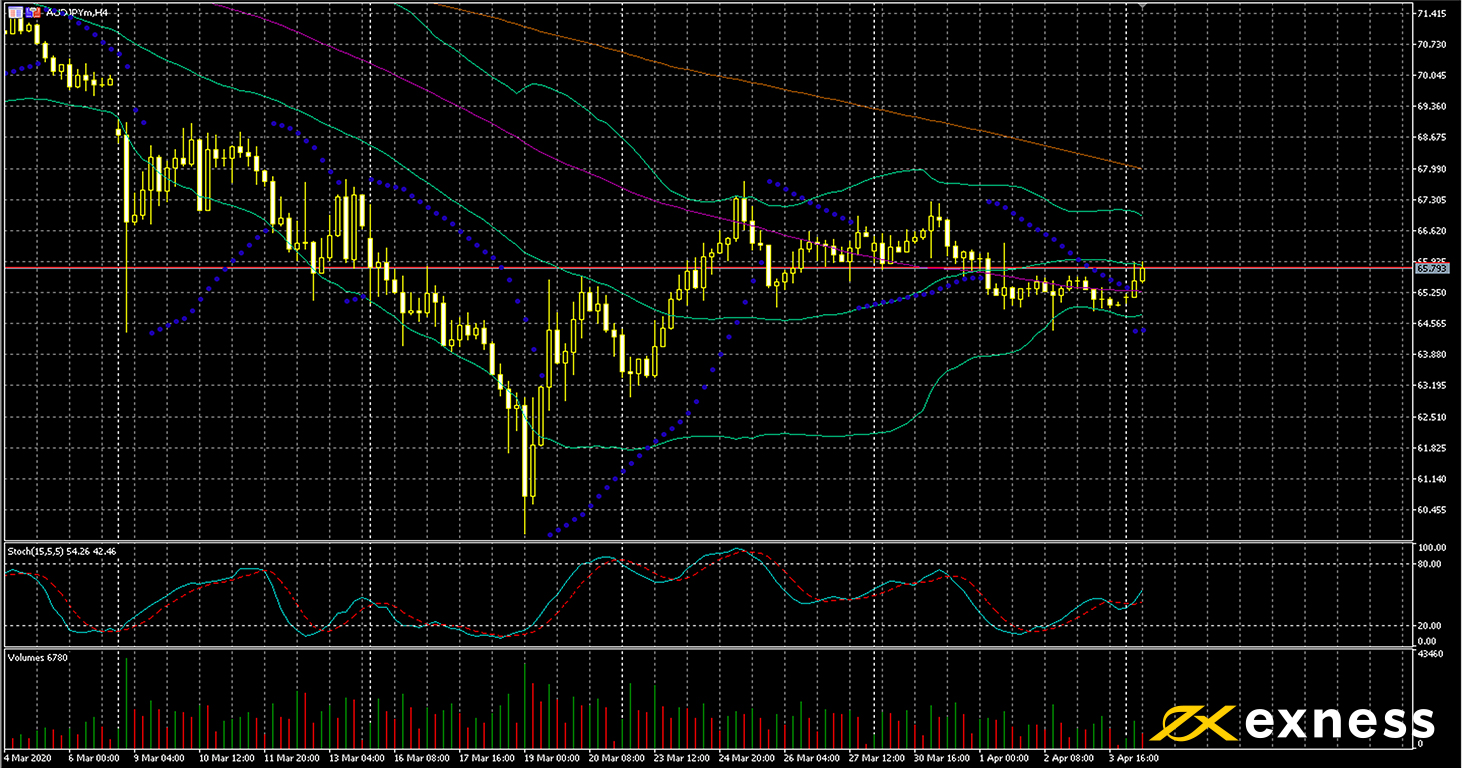 AUD–JPY has generally held around the same area for the last fortnight. Click on the image to magnify. The number of new cases of covid-19 in Australia is generally decreasing somewhat and this combined with stimulus measures have shored up stock markets. Improvement in China is also an important factor because of the close trade relationship between Australia and China.

Lower volumes over several weeks combined with contracting Bollinger Bands would suggest consolidation and sideways movement in the runup to the RBA’s meeting tomorrow morning. The 50 SMA from Bands completed a golden cross of the 100 SMA last Wednesday. Nonetheless, many traders will probably want to wait for the RBA’s meeting before committing themselves either way. No change is likely to the current 0.25% but what Dr Lowe and other senior members of the RBA say about economic prospects is likely to be key for the Aussie dollar in the short term at least. 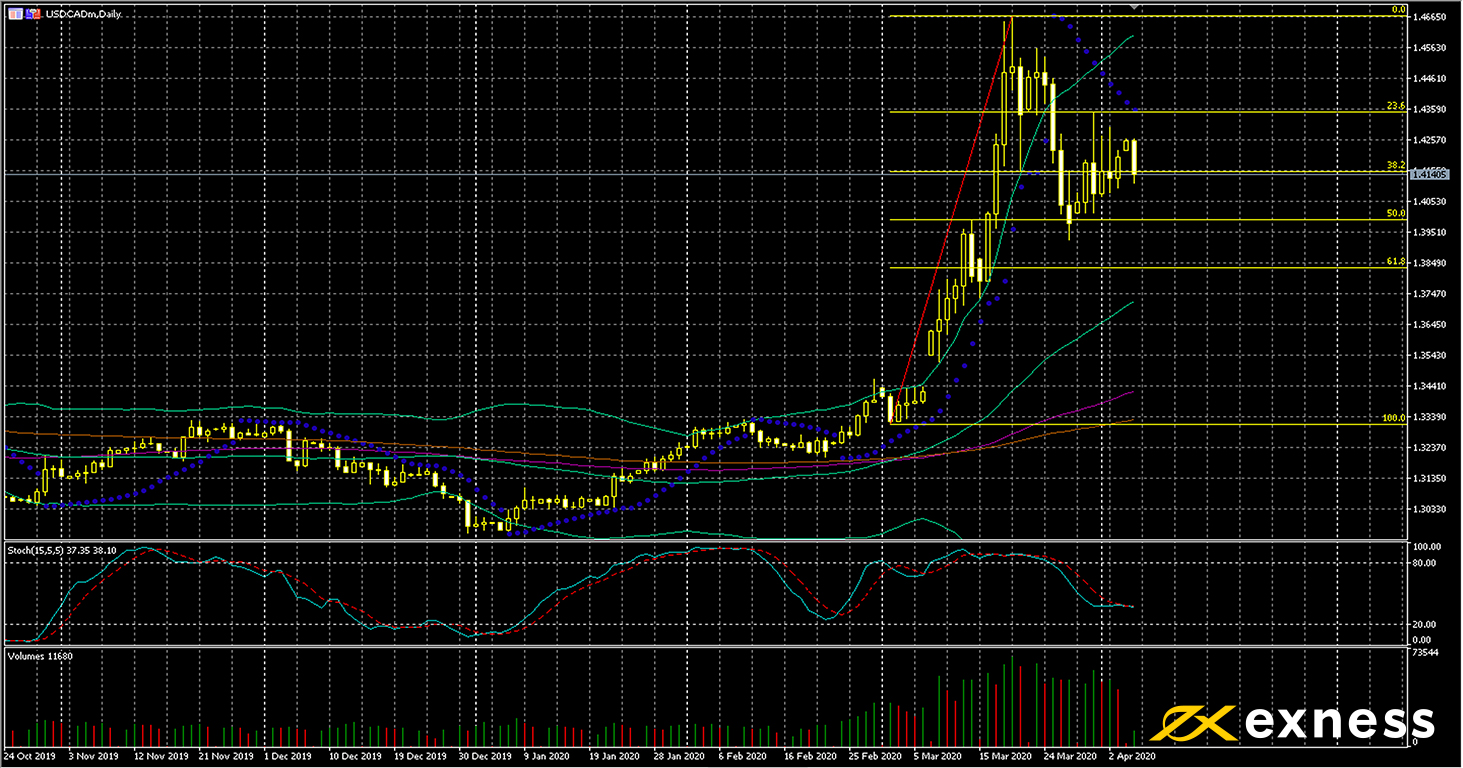 Dollar-loonie’s behaviour on the daily charts recently has been fairly consistent with ‘crisis mode’. Now, though, the American dollar is starting to lose a bit of ground to its northern counterpart as oil starts to move up and the spread of covid-19 intensifies in the USA. The BoC was one of the first big movers in terms of rates in March.

A total cut of 1.5% last month took the current target overnight rate down to 0.25%. Friday’s NFP was very weak, but a bad NFP was pretty obvious in the circumstances, and Canadian employment data this week probably won’t be much better.

USD–CAD has now moved clearly out of overbought based on Bands and the stochastic, with the slow stochastic now halfway between neutral and oversold. Selling volume has also increased dramatically since oil moved up from last Thursday. The immediate target for short-term sellers here would probably be the 50% Fibonacci retracement area a bit below the key psychological area of C$1.40.