Weekly data preview: focus on the RBA as reopening continues

Weekly data preview: focus on the RBA as reopening continues

Oil and stock markets have generally made gains so far today as various economies around the world continue to ease their anti-covid lockdowns. The euro also had a boost from very strong data on retail sales this morning. This weekly data preview looks at EURAUD, US500 and USDCNH with some of the key releases to affect each.

As has been the case for several weeks now, there wasn’t much news from central banks recently. Most are continuing to pump new money into their countries’ economies, supporting workers to some extent and stock markets quite significantly. There are two meetings of note this week, firstly the Bank of Israel at 13.00 GMT today, then the Reserve Bank of Australia at 4.30 tomorrow. No change is expected from 0.1% and 0.25% respectively. What the senior members of the RBA say about the outlook for Australia’s economy could be important for AUD this week, though.

The biggest data so far today was retail sales from the eurozone. The monthly figure at 17.8% is the highest number ever recorded since the launch of the euro. The annual number at negative 5.1% was also significantly less bad than the consensus expectation. Lastly, British construction PMI came as a big surprise to many analysts at 55.3, indicating relatively decent growth, against all predictions.

Among upcoming regular data, the most important figures include Canada’s Ivey PMI tomorrow plus Chinese annual inflation and German trade balance for May on Thursday. Symbols with the Canadian dollar will also probably interact strongly with the range of job data due at Friday lunchtime GMT. 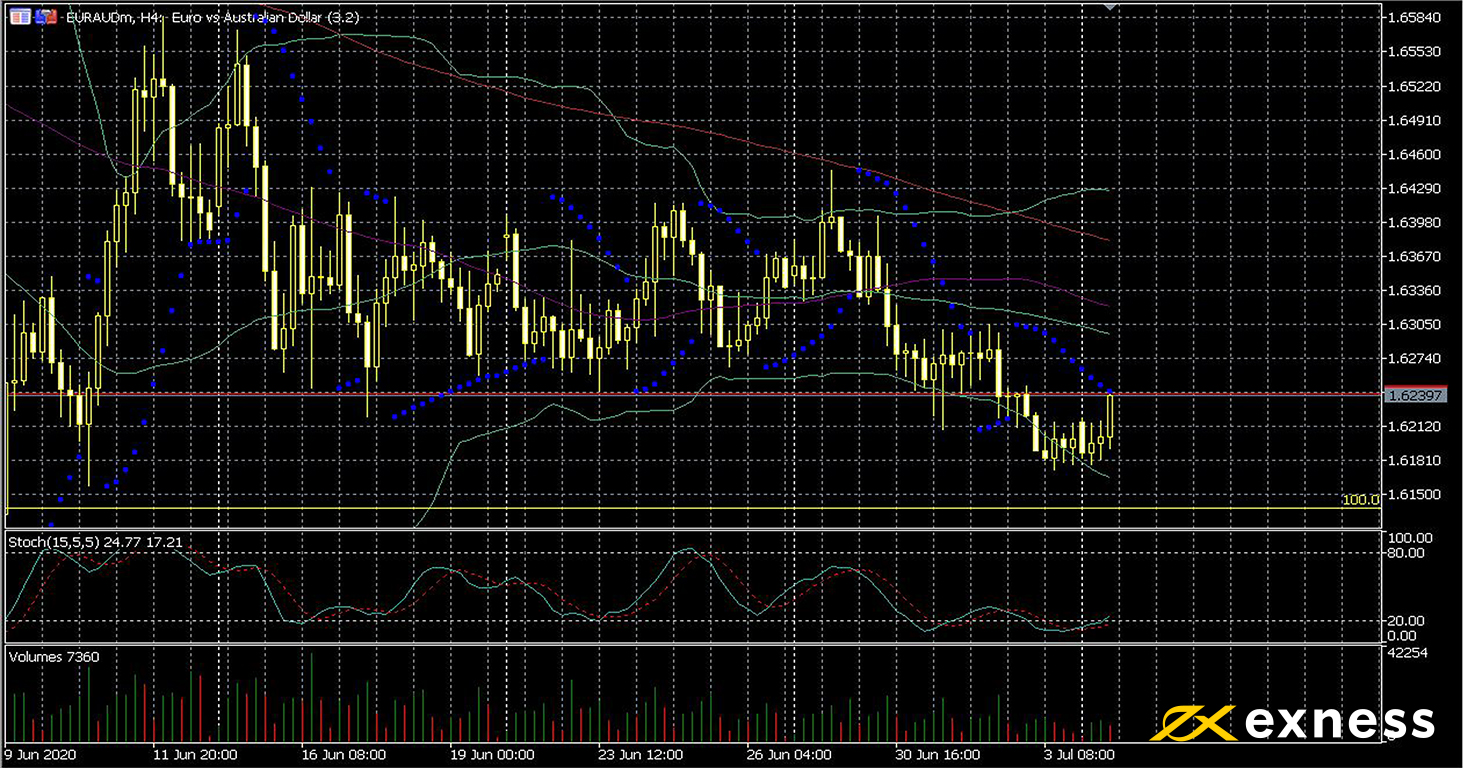 EURAUD has bounced fairly well so far today in the aftermath of the exceptionally strong data on retail sales from the eurozone. Most countries in the euro area are in the process of lifting their lockdowns gradually. German factory orders were disappointing today at 10.4% against c.15% predicted, but this figure still indicates fairly spirited recovery considering the circumstances. Major European indices are up so far today, led by the DAX (DE30) which had made a gain of slightly over 1% in the late morning GMT.

From a technical point of view, most of the factors are in place for a bounce to occur. Price has approached the 100% Fibonacci retracement area based on the daily charts, i.e. complete retracement from the euro’s earlier gains during the wave of panic in March. The slow stochastic (15, 5, 5) has completed an upward crossover within oversold and PSAR has flipped during the current period.

With volume of both buying and selling having declined, this could be the beginning of the accumulation phase of a new uptrend. Confirmation could be sought from studying behaviour around near-term resistances, primarily the 50 and 100 SMAs not far above the current price.

Two crucial events this week though will mean that fundamentals are going to be very much in focus. The first is the RBA’s meeting tomorrow, with the emphasis likely to be on the central bank’s plans for quantitative easing over this new quarter of the year. Germany’s balance of trade for May early on Thursday morning GMT is also a critical figure. 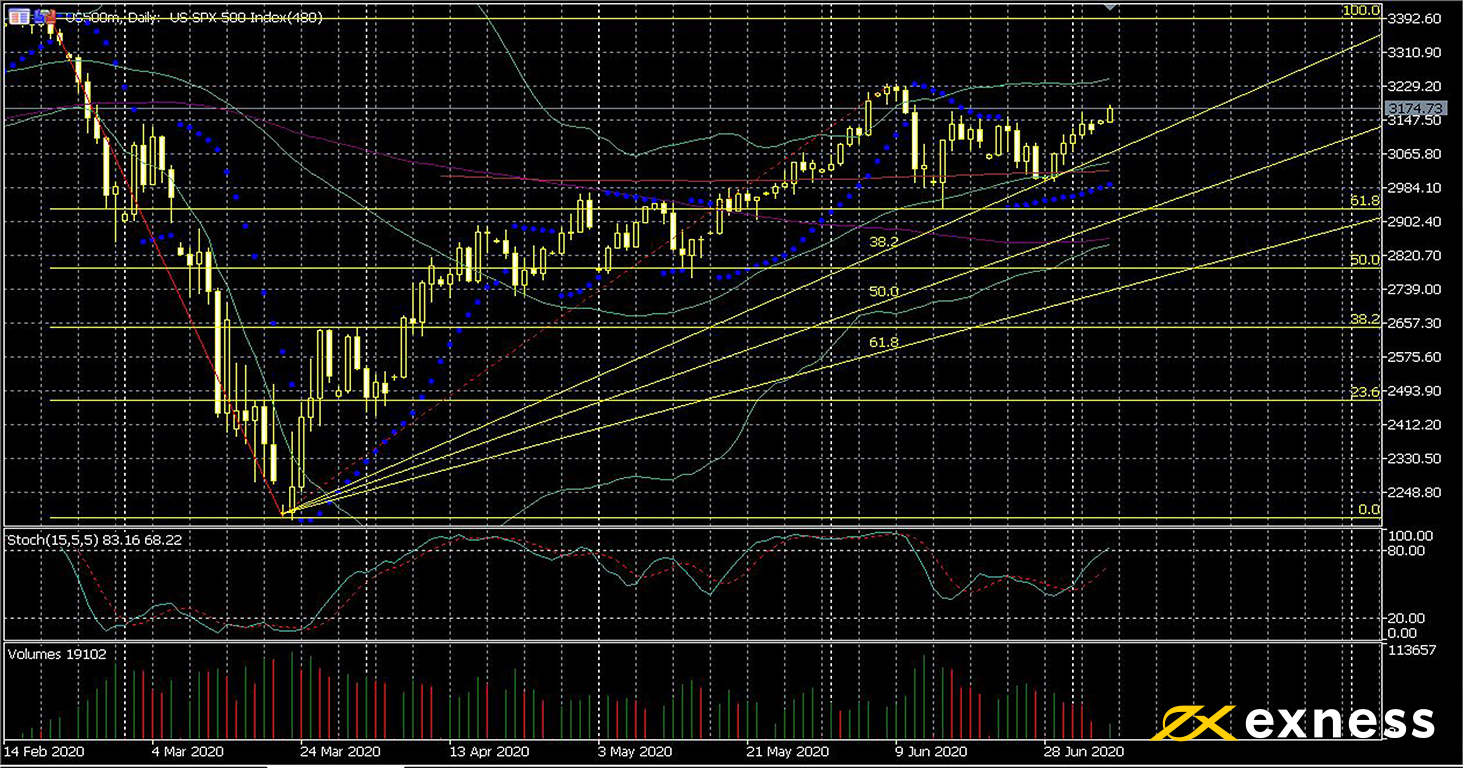 US500, the representative CFD based on the S&P 500, has continued to consolidate upward since last week. American indices have generally ignored domestic problems in the USA and nervousness around the outlook for Sino-American trade relations has decreased significantly as President Trump has redirected his ire onto domestic political opponents over the last few weeks. Like other indices, US500 has had a boost recently as tech shares have dramatically outperformed the wider market over the covid crisis.

There doesn’t seem to be much to stop another push above the latest high based on the chart. 3,230 was the level reached just before the initial rumours of a second wave of infections and consequent increase in markets’ fears. If this area is broken, a full retracement to the all-time high seems to be possible.

The first key support to the downside is the 61.8% Fibonacci retracement area, but the 38.2% zone from the fan might also trigger a bounce. Overbought is likely to be a concern though over the next few periods. In terms of data, jobs are the most important this week, in other words both JOLTs tomorrow and initial jobless claims on Thursday. 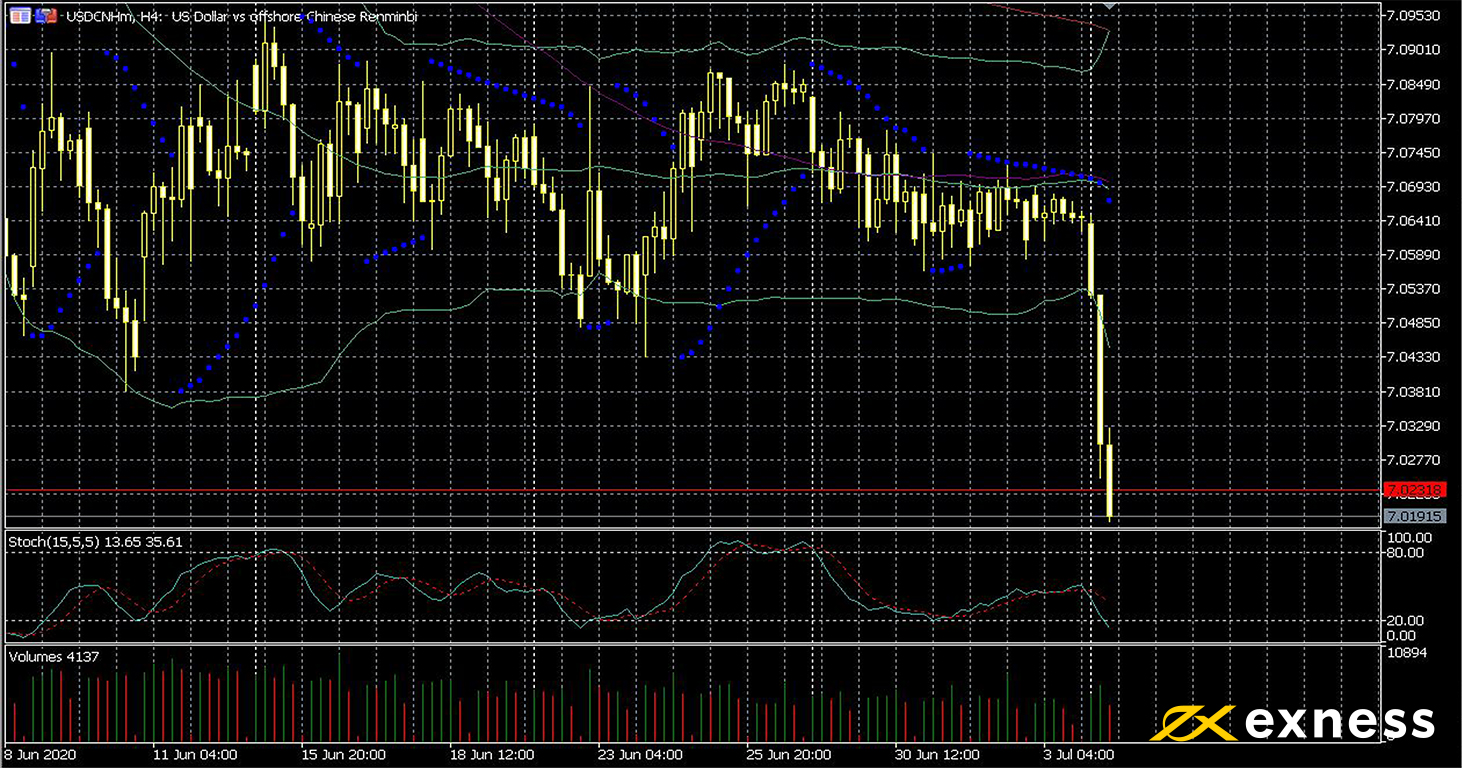 USDCNH collapsed this morning with this symbol so far posting its biggest daily loss in years. From a fundamental standpoint, China is overall handling covid-19 much better than the USA. Recent Chinese data has also been unusually good considering the circumstances, with Friday’s Caixin service PMI for June at 58.4 in particular soundly beating the consensus.

Technically, new sellers are likely to look for a daily close below ¥7.02 before committing themselves. This was an important support in April and a strong resistance in Q1 2020. The loss of nearly five fen in one day though means that this symbol is now clearly oversold, so for those looking at the medium-term and beyond, it would traditionally be considered wise to wait for a retracement to the upside to reduce risk and potentially maximise reward. Chinese annual inflation in the wee hours of Thursday is clearly the most important release here this week.

.Thank you for reading Exness Education’s weekly data preview! Join us again tomorrow and on Thursday for more analysis of active instruments. Don’t forget that you can request a symbol to be covered in insights by commenting on Facebook.