Midweek data preview: record contraction of GDP in the eurozone

Midweek data preview: record contraction of GDP in the eurozone

This week’s data so far have revealed the biggest ever contraction in eurozone-wide GDP and the lowest German trade surplus in 20 years. Despite Asian shares having started positively this week, all major European indices are in the red so far this week. Oil has also retreated somewhat this week from three-month highs, with Brent currently testing $40. Exness Education’s midweek data preview takes a closer look at XAU–USD, GBP–USD and EUR–AUD today.

There wasn’t any significant activity from central banks last week, with the three main meetings not revealing any new information. This week’s big news in this area is the Fed’s meeting tomorrow night. No change from 0-0.25% is expected, but the FOMC’s comments in the context of Friday’s unexpectedly strong NFP could be key for the dollar and correlated instruments like gold.

The most important releases of regular data this week include American inflation tomorrow afternoon GMT. Traders also have their eyes on Australian consumer confidence and Chinese inflation in the wee hours tomorrow. Finally the UK’s trade deficit is expected to improve slightly on Friday morning. 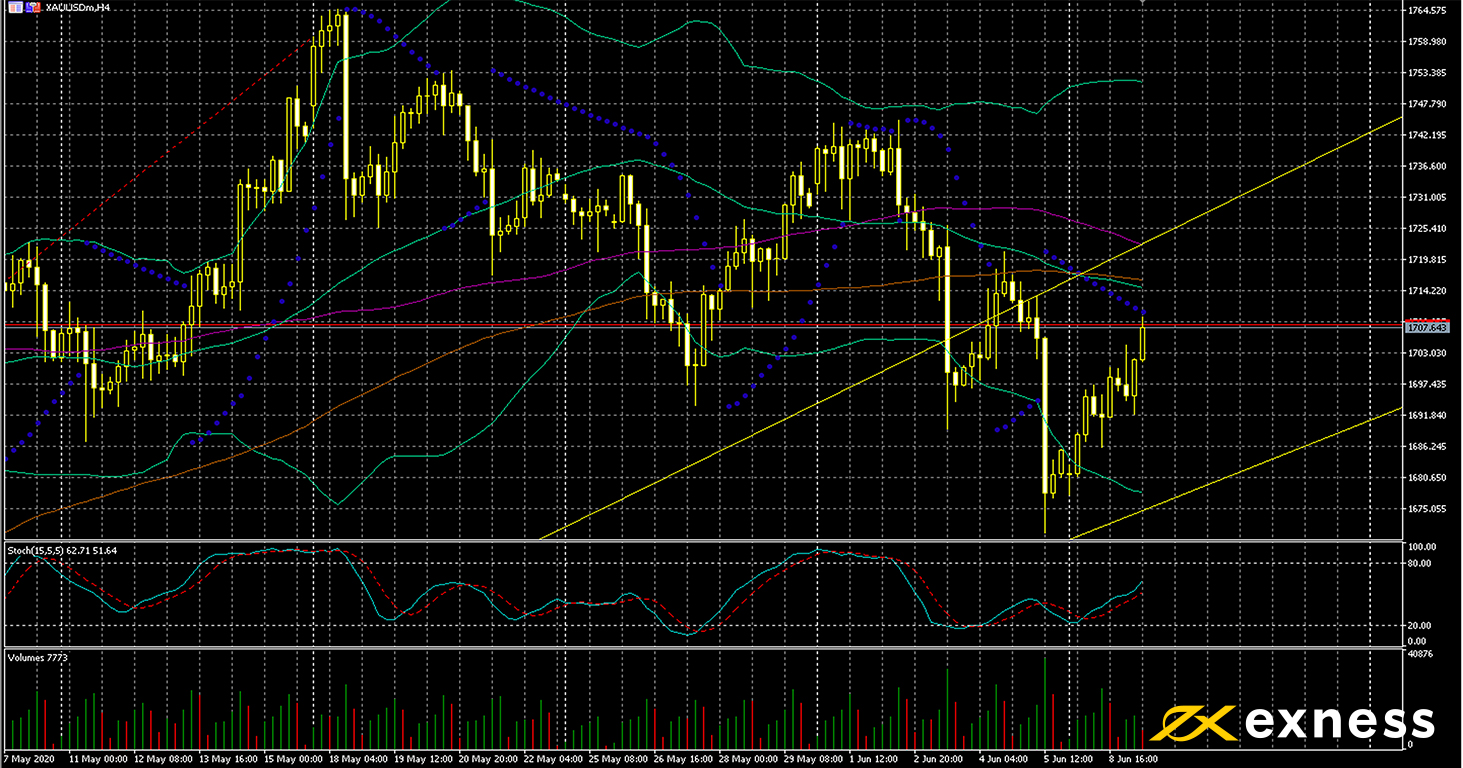 Gold has been fairly volatile though without a clear direction over the past six weeks. Having reached a new high around $1,760 in mid-May, price fell as confidence in stock markets increased and indices like USTEC continued their strong recoveries. Fundamental factors including tension between the USA and China over Hong Kong and widespread rioting in the USA have not yet had a clear impact on gold. If this situation changes and traders start shifting their attention somewhat away from shares, it’s possible that gold could retest its recent high.

From a technical perspective, the uptrend on the higher daily chart is clearly still active. We can observe a fairly strong bounce from the 50% Fibonacci area (the fan is based on the daily chart) in the aftermath of Friday’s relatively good NFP. High buying volume around this time could suggest ongoing gains driven by medium-term new buyers, although this should be accepted only with caution given that Volumes here applies only to this particular symbol, XAUUSDm. Moving averages are still in the process of reconfiguring, with the angle of the 50-200 crossover insufficient to be considered a death cross.

This week’s critical release for gold is the FOMC’s meeting tomorrow night GMT. American and Chinese inflation earlier tomorrow could also be key. There’s still no clear indication of a second wave of covid-19 infections and generally risk sentiment is recovering somewhat, but these factors should be watched closely over the next few days. 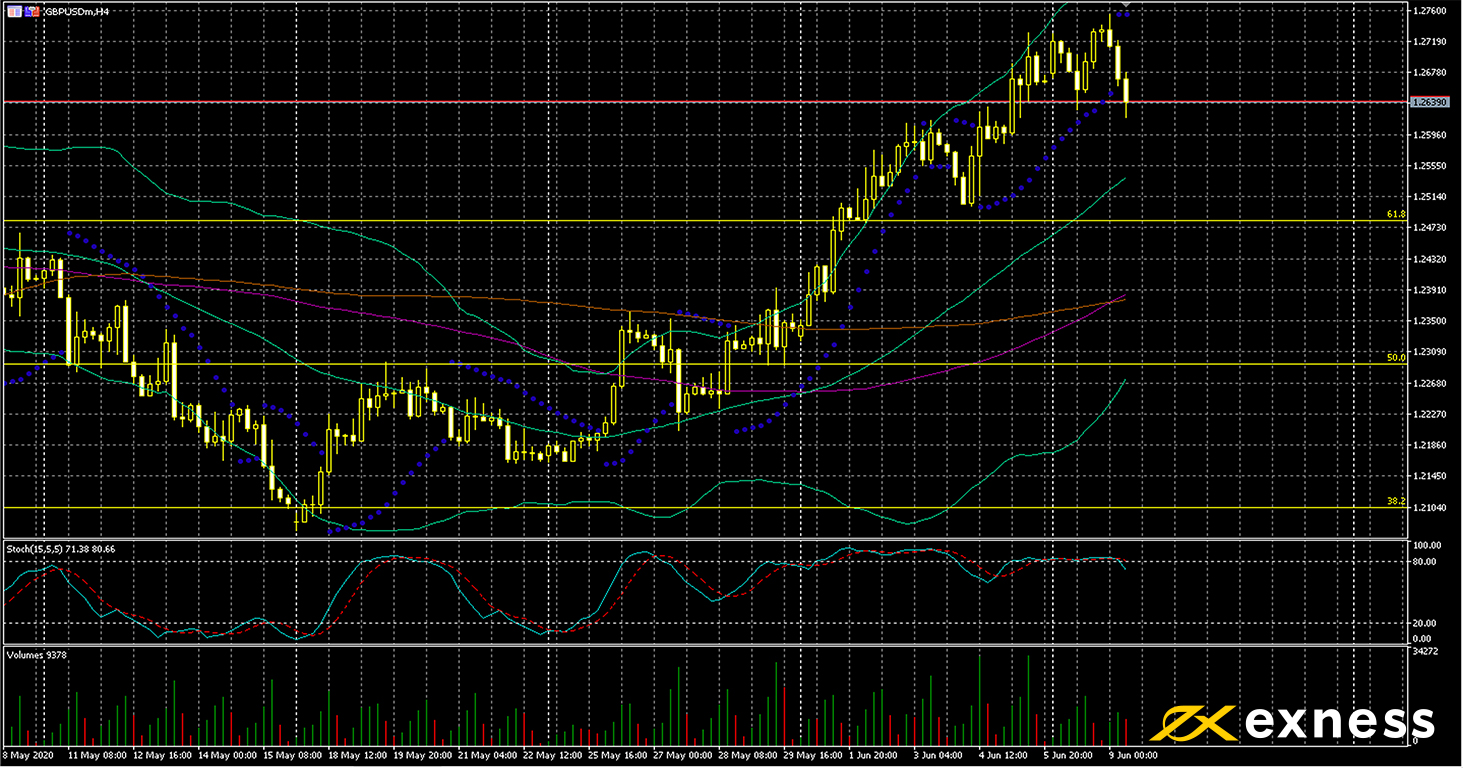 Having made a fresh three-month high around $1.275 overnight, the pound has now retreated somewhat against many currencies today including the dollar. More news of the UK’s lockdown being eased is awaited, and a general weakening of risk on so far today has weighed on the pound somewhat. No real progress was made in the recent fourth round of trade talks between the UK and the EU; the deadline for the former to request an extension of the transition period is the end of July.

Based on technical analysis of cable it does seem that the pound has overreached, having been overbought based on the slow stochastic fairly consistently for the whole of last week. Moving averages print an increasingly strong buy signal, with the 100 SMA in the process of golden crossing the 200. Volume suggests that traders are buying both dips and strength. Apart from the key American releases mentioned above, this week’s other crucial figure is the UK’s balance of trade on Friday morning GMT. 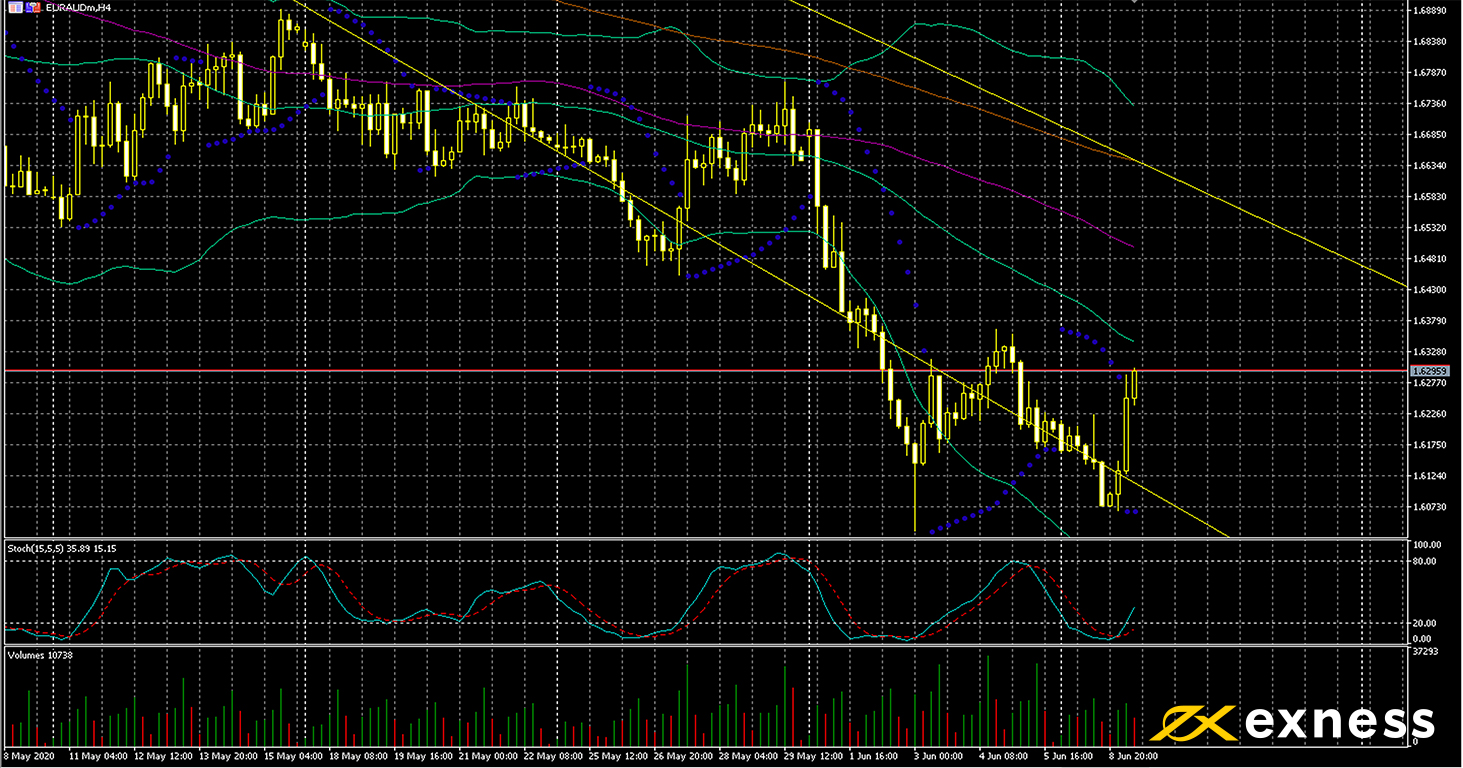 The Aussie dollar has surged up recently against most widely traded currencies as the ASX, Australia’s main index of shares, has made strong gains and economic releases have generally indicated recovery in progress. The ASX 200 made a three-month high in today’s session and prices of key export commodities have continued to rise: Tianjin 63.5% moved above US$100 a tonne this morning, the highest in nearly a year.

Volatility can reasonably be expected to remain high for EUR–AUD given the sharp expansion of Bollinger Bands since the start of last week. Moving averages print a strong sell signal. As of today there’s no longer any oversold signal here, with the slow stochastic having moved up to 32. The 38.2% zone from the daily Fibonacci fan might continue to be an important support over the next few weeks assuming there’s no dramatic change in fundamental circumstances. This week’s key release to come for EUR–AUD is tomorrow morning’s Westpac consumer confidence.

Thank you for reading Exness Education’s midweek data preview! Join us again in the latter half of the week for more analysis of active instruments.