It’s been quite an active week for the dollar against most currencies, with the American currency posting some gains against havens in the second half. Overall though, the greenback is down against most emerging currencies, especially the peso. Welcome to Exness Education’s weekly dollar roundup!

Earlier in the week, the dollar received strong fundamental support from a very good release of the ADP’s employment change. The ADP’s data on Wednesday afternoon GMT indicated that the American economy added 202,000 jobs in December, much higher than the 150,000 expected. November’s figure was also revised upward to 124,000. Data from the ISM on Tuesday afternoon was also generally good, with non-manufacturing PMI especially moving up to 55 from last month’s 53.9.

Retaliatory rocket/missile attacks by Iran on American troops in Iraq dominated the news in the early part of the week, with oil and havens making strong gains. However, fears of a major escalation have subsided since Wednesday. Stock markets have in general moved higher in the second part of the week, as has the dollar.

The key data anticipated today is the NFP at 13.30 GMT. The consensus expectation currently stands at around 165,000 compared with December’s 266,000. 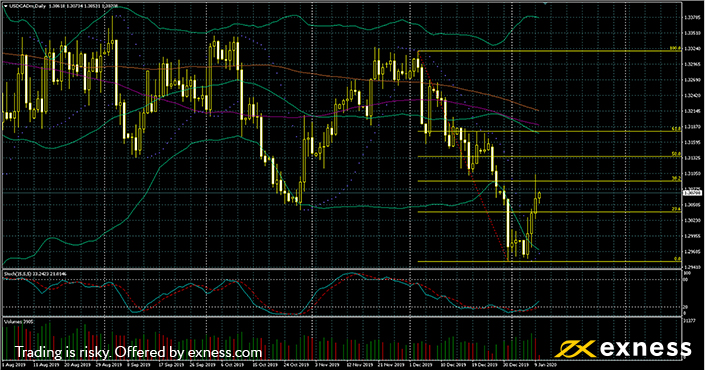 USD–CAD has shown some signs of moving upward for the past few days. Sharp losses at the end of last week as oil surged upward haven’t been followed through. From a technical perspective, selling saturation has dominated this timeframe for some weeks now, so an extended retracement or consolidation seems to be possible.

The 23.6% Fibonacci retracement area didn’t put up much resistance yesterday. However, the 38.2% zone might be significantly stronger. It’s also worth noting that selling volume has increased since Wednesday night GMT, so it appears that many traders are expecting the downward trend to resume soon.

Estimates for the American and Canadian employment data this afternoon point towards gains for the greenback and losses for the loonie. The ADP employment data on Wednesday might suggest that the NFP could be a bit higher than expected. Nevertheless, given the difficulty of predicting non-farm payrolls with much accuracy, traders should be prepared for anything this afternoon. 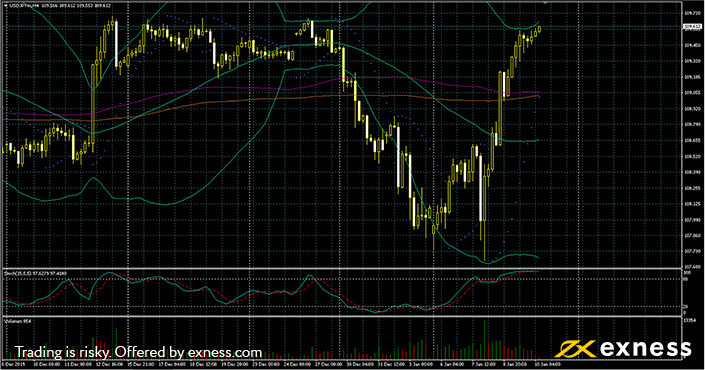 Movements on the chart of USD–JPY have been pretty unusual for the last fortnight. Rapid changes in sentiment and events in stock markets have led to very high volatility but essentially no change compared with Christmas Eve.

The slow stochastic (15, 5, 5) is probably the key indicator here: it displays a very strong overbought signal, with both the main and signal lines reading over 97. This alone makes buying in here very risky despite expectations for the NFP being very positive.

The sudden spike in buying volume on Tuesday afternoon GMT was followed quite quickly by price surging above all three moving averages. While momentum upward has been exceptionally high earlier in the week, this has now subsided as traders await the key data this afternoon. A good NFP would probably result in consolidation around ¥109.60, but a disappointing result might mean that the dollar has a lot of room to fall here.